Purple is a colour replete with imperial and spiritual associations. Certain Roman emperors famously reserved the use of purple clothing for themselves. It was also expensive: Diocletian’s Edict of Maximum Prices issued in the year 301 set the limit on a pound of purple wool at 50,000 denarii, the same value as a pound of gold. Books, too, written on purple were high-status objects. According to one account, Constantine the Great (r. 306-337) received a gift of poetry written in gold and silver on purple leaves (ostro tota nitens, argento auroque coruscis scripta notis) (P. Optatianus Porfyrius, Carmina I: 1-4.).

One of the earliest surviving manuscripts written in gold and silver on purple-stained parchment is in fact named for this colour: the Codex Purpureus Petropolitanus, a Greek manuscript of the Gospels written in the 6th century. In the Middle Ages, it seems probable that scribes and artists were inspired by these Late Antique manuscripts to incorporate purple into the design of prestigious books. 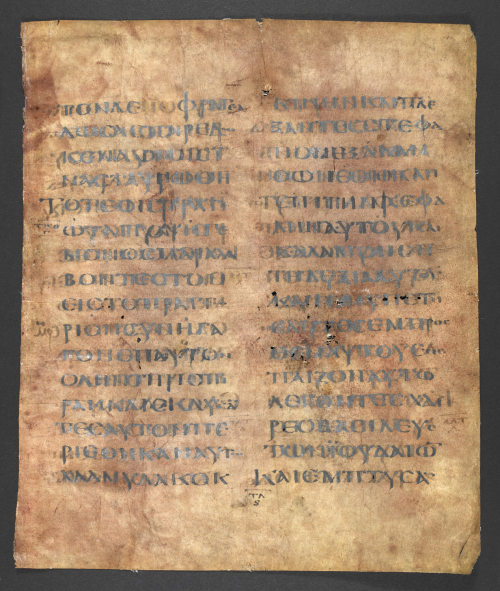 From an early date, the use of purple in Christian biblical texts, often in combination with gold or silver writing, came to symbolise their sacred nature. For example, Godescalc, the scribe of a Gospel Lectionary made for the Emperor Charlemagne in 780, explained that ‘golden words’ on purple pages ‘disclose the joys of heaven’ (the manuscript is now BnF, MS nouv. acq. latin 1203).

One of the places where purple features in illuminated manuscripts is in full-page title or ‘incipit’ pages (from the Latin word incipit, meaning ‘it begins’), often paired with text written in gold or silver. An impressive example is found in a 9th-century manuscript made in the important centre of Tours. It is framed by decorated rectangular panels and interlaced golden corner pieces, which introduce the Gospel of St Matthew: ‘Incipit Evangel[ium] Sec[un]d[u]m Mattheu[m]’ (The beginning of the Gospel according to Matthew), written on painted purples panels. 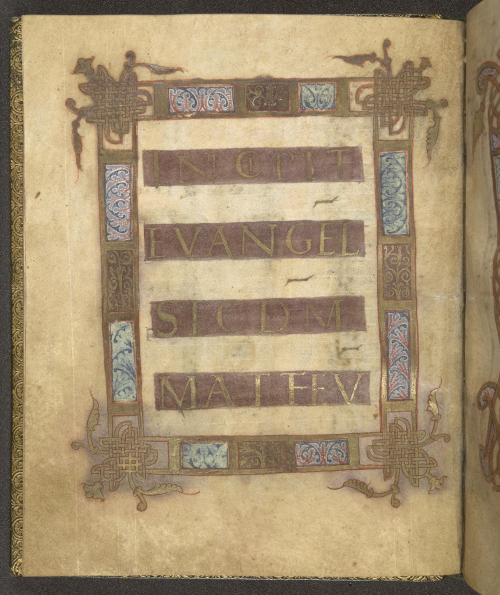 Sometimes an entire page is coloured purple, as in this early Bible from Canterbury, which although incomplete, retains four purple leaves. Three feature text written in alternating lines of gold and silver capital letters, while the fourth includes an Evangelist portrait of St Luke. The columns, formed of complex decorative interlace patterns in circles and rectangles redolent of metalwork provide a setting for the beginning of St Luke’s text: Quoniam quidem (forasmuch), written in gold and silver letters. 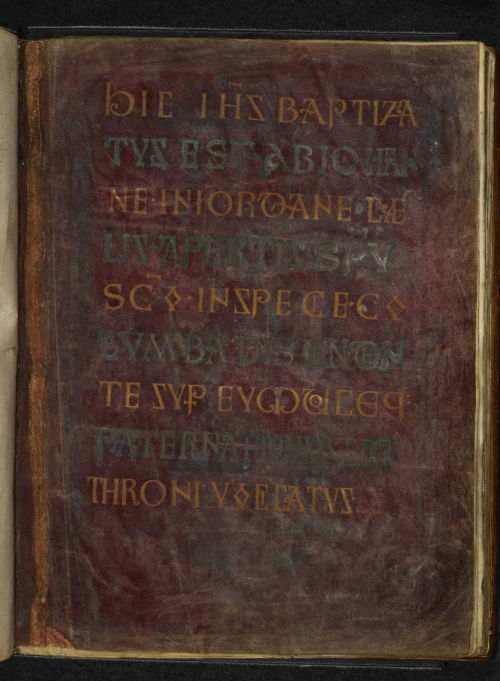 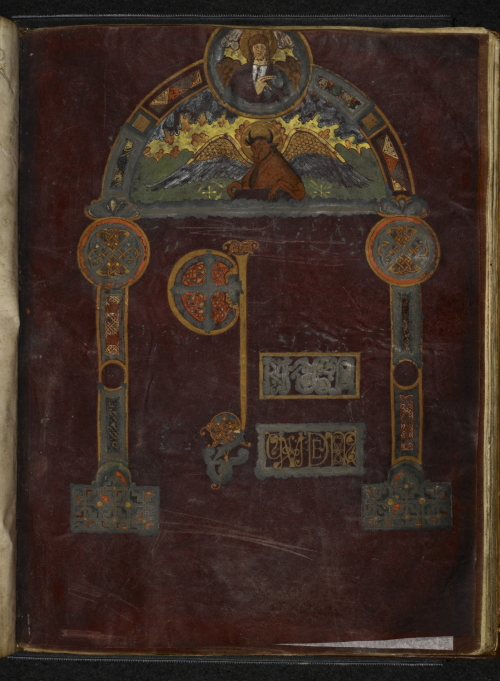 Evangelist portrait of St Luke with his symbol of an ox, at the beginning of his Gospel, from the Royal Bible, Canterbury, 1st quarter of the 9th century: Royal MS 1 E vi, f. 43r

It seems likely that the purple was achieved through painting or staining the parchment, rather than by dipping the entire page in dye, particularly considering the many examples of purple background on only part of the page. Recent analysis of a manuscript now in Cambridge revealed that its purple background was achieved by painting a purple made from a plant, probably orchil (Cambridge, Fitzwilliam Museum, MS McClean 30, discussed in Colour: The Art and Science of Illuminated Manuscripts, ed. by Stella Panayotova (London, 2016), no. 3. You can find out more about how medieval manuscripts were made in our video article.

The use of this colour was particularly popular in the early Middle Ages, when scribes and artists demonstrated the preciousness of the Gospel message through extraordinary decoration in gold, silver and special purple stained or painted leaves.