Diligent readers of this Blog will remember previous posts presenting some of the finest Carolingian manuscripts, such as the Moutier-Grandval Bible and one of the so-called Theodulf Bibles. Like most Carolingian manuscripts they are characterised by the main text being written in Caroline minuscule script. The earliest known example of this script appears in a manuscript from the abbey of St Peter at Corbie (near Amiens), written at some point before 769. It soon developed and spread as a clear and legible standardised script throughout the Carolingian empire. Its ubiquity persists to this day since it was revived during the Italian Renaissance and became the base for modern lower case typefaces of the Latin alphabet. 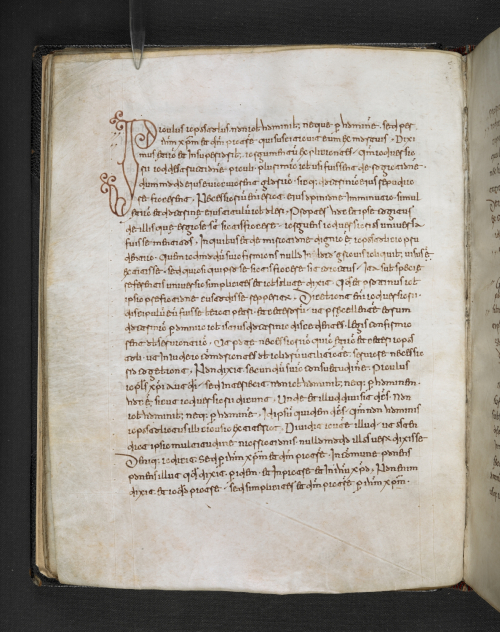 Interestingly, even as Caroline minuscule was becoming the predominant script at this period, minuscule scripts based on pre-Carolingian variants kept being created. One example is the so-called AB-script, which was influenced by the writing of Merovingian royal documents (the dynasty preceding the Carolingians). This distinctive script takes its name from the forms of the letters ‘a’ and ‘b’, and was in use around the turn of the 8th century (c. 780–830). There are 35 surviving manuscripts of this script.

One manuscript to feature this type of script (Harley MS 3063) contains two commentaries on St Paul's Epistles, the first by the anonymous author known as Ambrosiaster (written c. 366–384), and the second by Theodore of Mopsuestia (b. c. 350, d. 428).

The characteristic forms of the letters ‘a’ and ‘b’ can be seen clearly in the first line of the image above, which reads ‘Paulus Apostolus non ab hominib(us) neque p(er) homine(m), sed per...’. Focusing on the word ‘ab’, in the middle of the line, you can see that the form of the ‘a’ is open at the top. It almost looks like an ‘i’ with a small ‘u’ joined to it. The ‘b’ next to it is distinguished by a straight vertical stroke, like the cross bar of a ‘t’. This stroke does not connect with the upwards curve of the bowl at the bottom, as in the modern form of the lower case ‘b’. Another example of AB-script is found in a fragmentary copy of St Augustine’s De civitate Dei (The City of God), now bound with two other originally separate manuscripts (Harley MS 4980, ff. 1–2). AB-script features other letters written in a distinctive way, such as ‘t’. This is evident in the word ‘inter’ in the 5th line of text (…inter se atq(ue) nobiscu(m) diuersitate tradunt(ur). Na(m) et simias…), pictured below. In this word the left side of the cross stroke of the ‘t’ curls back towards the stem, differentiating it from both a Caroline and modern lower case ‘t’.

Both these examples of AB-script were written at Corbie Abbey, showing that the scribes there continued to experiment even in the early years of Caroline minuscule. It was once thought that AB-script originated at Corbie, because 14 of the 35 surviving manuscripts were made — or at least corrected by — scribes from that abbey. However, recent studies of these manuscripts and their extant exemplars have revealed a more complex picture of the development of this script. It appears that more than one centre was using AB-script to write often complicated and unusual texts, possibly commissioned directly from prominent personalities at the Carolingian court.

You can read more about the continued influence of Corbie Abbey in the article on medieval places of manuscript production in France and England on the Polonsky Foundation England and France Project-website.