‘Frenssh’ as it was ‘spak’ in medieval England

In the prologue to the Canterbury Tales, Chaucer’s prioress is accused of speaking an inferior version of French learned in Stratford rather than in Paris:

Frenssh she spak ful faire and fetisly,
After the scole of Stratford atte Bowe,
For Frenssh of Parys was to hire unknowe.

(And she spoke French fluently and elegantly,
After the school of Stratford-at-Bow,
For French of Paris was to her unknown.) 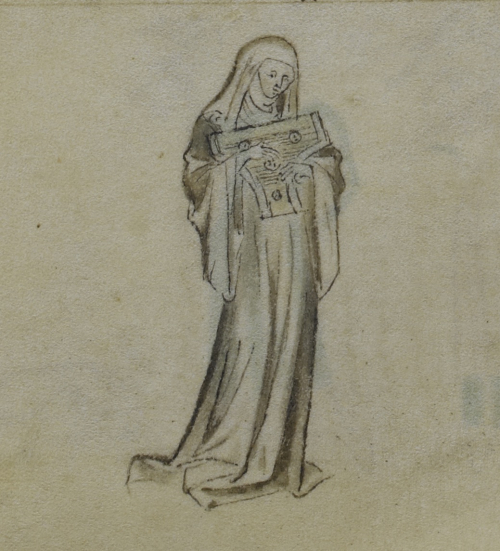 In the same vein, there are examples of French medieval commentators criticising the way French was spoken in England as it evolved from being the mother tongue of royalty and the nobles who crossed the Channel after the Norman Conquest to being an acquired status symbol, as it was for Chaucer’s prioress. A separate dialect known as Anglo-Norman diverged from the French used in mainland France during this period. Spelling, pronunciation and vocabulary were influenced by the Norman French spoken by William the Conqueror and his followers, and by the existing vernacular, Old English, still used by much of the local population.

French was one of the languages of both spoken and written communication in England for an extended period from 1066 onwards and it was still used in some legal contexts up to the end of the 17th century. The fact that French was widely used is evident in the quantity of word-pairs in modern English – where two words exist with same meaning, one derived from an Old English root word and the other from a French one (e.g., thoughtful/pensive; kingdom/realm; enough/sufficient, walk/march). Such examples show how large numbers of French words were adopted during the Middle Ages, hugely enriching the vocabulary of English and changing the language fundamentally.

One of the earliest surviving manuscripts in Anglo-Norman French contains two texts, the Computus and the Bestiary adapted from Latin works by the earliest named French author, Philippe de Thaon, in the 12th century. The latter was dedicated to Adeliza of Louvain (d. 1151), wife of King Henry I of England. On line 4 of the page pictured below de Thaon confirms that he has written en franceise raisun (in the French language). 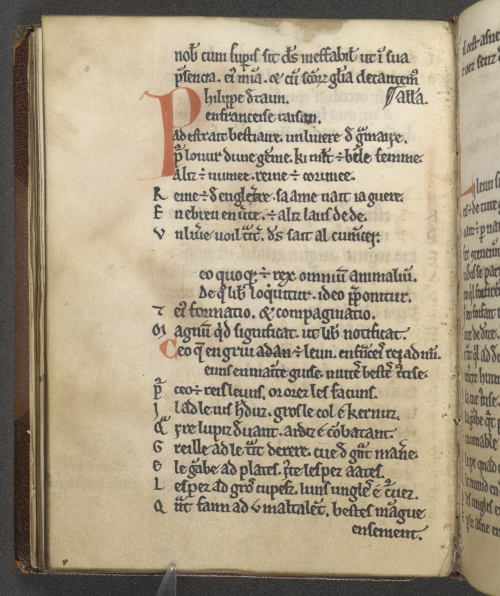 During the reign of Henry II (r. 1154–1189) and Eleanor of Aquitaine, literature in French flourished at the English royal court, though surviving manuscripts from this period contain mostly devotional texts, such as the Psalter in French verse below. Latin remained an important written language, particularly in the Church, and so the corresponding text in Latin is written in red in the margins. 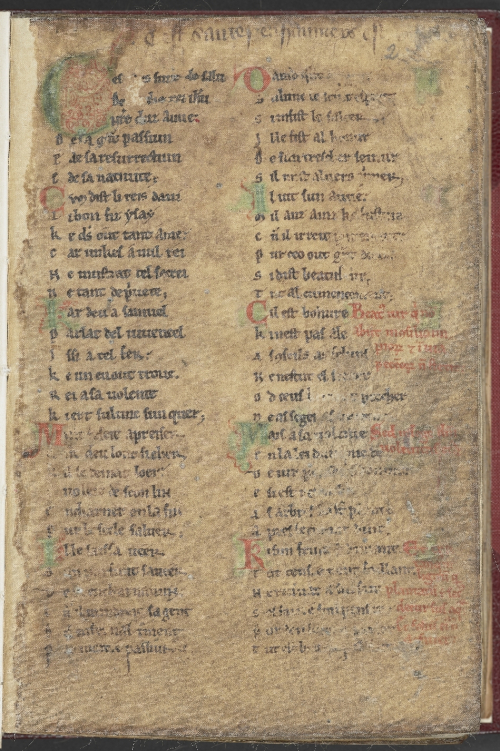 A Psalter in Latin and Anglo-Norman French verse, England or France, 1175-1225: Harley MS 4070, f. 2r. In the upper margin someone has added ‘Cest sauter en fraunceys est’ (This Psalter is in French)

Written legends, chronicles and other literary texts in Anglo Norman survive in greater numbers from the 13th century onwards, when romances surrounding heroes like King Arthur were popular. It is not always possible to establish if surviving manuscripts were produced in England or in Normandy, as many nobles and English royalty held territory on both sides of the channel.

Guy of Warwick, a now almost forgotten hero but quite the superstar in medieval England, is the subject of an early written romance in Anglo-Norman pictured below. Beginning life as a humble page to the Earl of Warwick, Guy becomes a knight and performs numerous chivalric deeds throughout Europe and the East in order to win the hand of the earl’s daughter, his beloved Felice. But he has no sooner married than he abandons his wife and renounces the wealth and power he has gained to become a hermit, devoting his life to God. 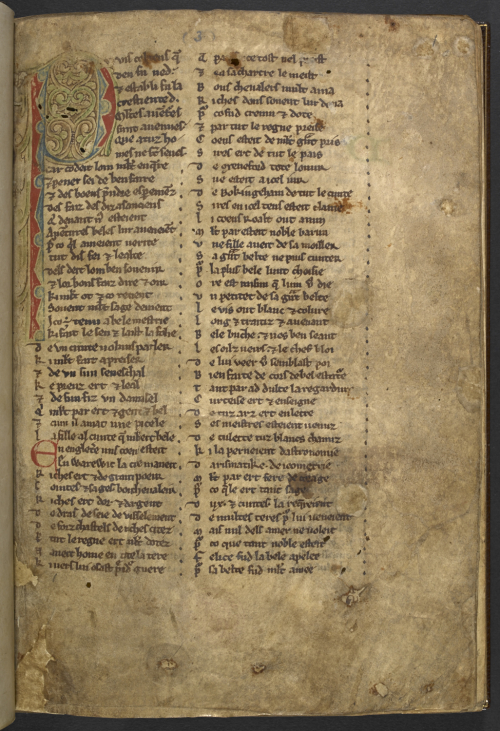 Though the 13th-century text above is not illustrated, an episode from Guy’s legend is pictured in the lower margins of the Taymouth Hours, which includes some prayers in Anglo-Norman French. Across several pages are a series of graphic, comic-strip style illustrations of one of Guy’s many swashbuckling adventures. Fighting on the side of the Emperor of Constantinople, he meets a lion that is being pursued by a ferocious dragon. Taking up his sword, he kills the dragon with one blow, and so the lion becomes his faithful follower, never leaving his side and even lying at the foot of his bed each night. The story must have been familiar enough to medieval audiences to require little explanation as only the caption, ‘Gwi de Warwik’, accompanies the action (beneath the images on ff. 14r and v). The spelling ‘Gwi’ instead of French Gui (for Guy) features the English letter ‘w’, not used in French. Tales of the early kings of Britain were also popular among French-speaking nobility and royalty in both England and France, judged by the manuscripts that survive. An illustrated copy of the Roman de Brut, an Anglo-Norman verse chronicle of Britain that includes legendary characters like King Arthur and Merlin, survives from the mid-14th century. At the end is an update to the reign of Edward III (r. 1327-77), containing the following words:

Here the scribe uses ‘ke’ alternating with ‘qe’ for the French que (that), and variant spellings, including ‘sun’ for French son (his) and ‘pruz’ for preux (brave), which provide evidence that vowels were pronounced differently in Anglo-Norman and Continental French by this time. 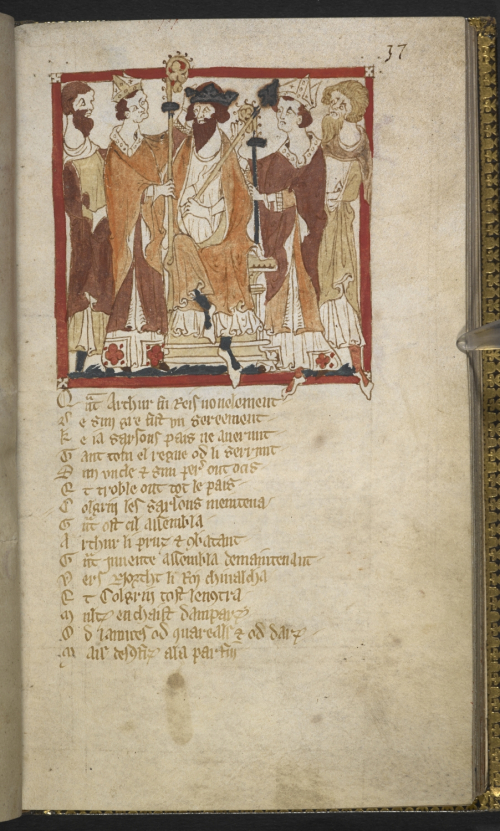 As English regained its position as the dominant written language in England, literature in French was replaced by the works of authors like Chaucer, Gower and Lydgate who wrote in Middle English. Nevertheless, French continued to be used in some contexts including the law courts for a considerable period.

A number of 12th-century manuscripts containing Anglo-Norman French were digitised as part of the Polonsky Medieval England and France 700-1200 project. You can read more about the use of French on both sides of the Channel before 1200 in our article on the Polonsky project site.