Gold and Glory at Hampton Court

The exhibition Gold and Glory: Henry VIII and the French King opens this week at Hampton Court Palace. It celebrates the ‘Field of Cloth of Gold’, one of history’s most famous and spectacular peace summits at which rival Renaissance rulers Henry VIII of England (1509–1547) and Francis I of France (1515–1547) met in person. The British Library is delighted to have loaned a number of manuscripts to be displayed alongside an array of treasures from 1520, including works of art, gold, weapons and textiles. Together they tell the story of a dazzling spectacle of diplomacy, pageantry and magnificence. Henry and Francis’s legendary encounter inaugurated a new Anglo-French alliance that was signed in 1518 as part of a European-wide Treaty of Universal Peace. The treaty was negotiated by Cardinal Thomas Wolsey, Henry VIII’s brilliant administrator and trusted adviser, in response to Pope Leo X’s call for universal peace the previous year. As a result, Wolsey succeeded in reasserting his master’s status as a powerful European prince through peaceful means rather than warfare.

In the wake of the Treaty of Universal Peace, preparations got underway for the kings to meet in person.  Initially planned for 1519, the peace summit was postponed following the death of Holy Roman Emperor Maximilian I. Henry expressed his disappointment by gallantly promising not to shave his beard until he and Francis were able to meet face to face and the French king agreed to do the same. One of the British Library loans, a letter sent by Sir Thomas Boleyn to Cardinal Wolsey in November 1519, records that Henry later reneged on his vow because Queen Katherine ‘desired hym to putt yt of for her sake’. The French delegation was appeased by Thomas Boleyn’s assurance that Henry felt more affection for Francis than for any other king or prince and agreed that ‘their love is nat in the berdes but in the hartes’. 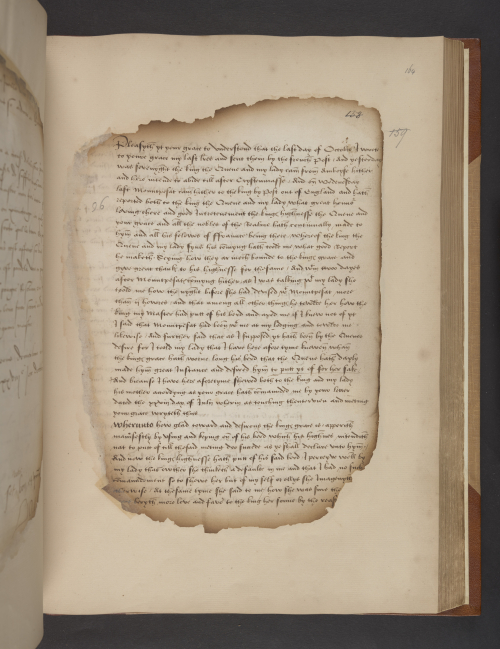 Letter from Sir Thomas Boleyn to Cardinal Wolsey, recording how Henry VIII had reneged on his earlier promise not to shave off his beard until his meeting with Francis I (16 November 1519): Cotton MS Caligula D VII, f. 164r

Henry departed for France on 31 May 1520, accompanied by Queen Katherine, his sister Mary Tudor, dowager Queen of France, Cardinal Wolsey, and some 6,000 subjects, courtiers and English nobility. The two kings met on 7 June 1520 in the Val Doré, a small valley equidistant between the French town of Ardres and the English headquarters at Guînes in the Pale of Calais, a territory held since 1347 by the kings of England as part of their claim to the kingdom of France. Another British Library loan provides visitors with a contemporary view of the English castle of Guînes, where Henry lodged for the duration of the peace conference. View of the keep and part of the walls of the English castle at Guînes (2nd quarter of the 16th century): Cotton MS Augustus I II 12

Both kings viewed the summit as an opportunity to impress those in attendance with magnificent displays of their wealth and culture; everything was done on a grand scale. A temporary town of tented pavilions that replicated royal palaces was built to accommodate their vast entourages. Constructed of canvas, the tents were dressed in rich fabrics, including cloth of gold, which gave the event its name: the Field of Cloth of Gold or ‘Camp du Drap d’Or’. A stunning tent design on loan from the British Library illustrates the size and splendour of the accommodation erected for Henry’s court.

After their initial meeting on 7 June, Henry and Francis demonstrated their princely power and military prowess in a daily round of tournaments involving jousting, mock battles, archery, wrestling matches and other feats of arms lasting more than two weeks. Both kings participated in the jousting competitions. Henry VIII in particular was renowned as a skilled jouster, and it is possible that in one drawing loaned by the British Library, the figure shown on horseback with a broken jousting lance is Henry himself. 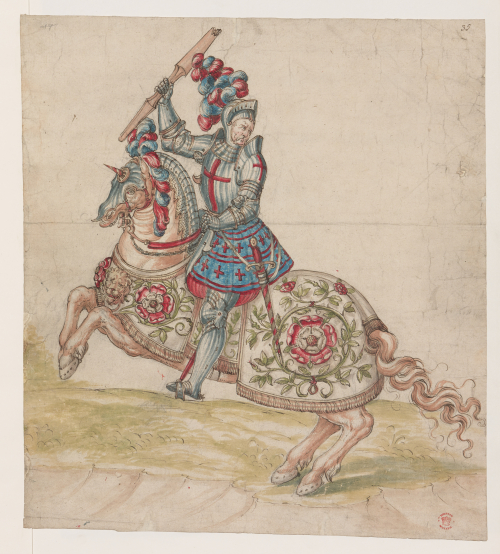 The Field of Cloth of Gold was also a spectacular festival of entertainments. Henry and Francis hosted sumptuous feasts and banquets and laid on lavish entertainments with music, singing, dancing and masques. Choristers from the English Chapel Royal were in attendance and performed at the great liturgical feasts and the public Mass led by Cardinal Wolsey on the summit's final day. Shown below is a beautiful choirbook from the British Library on display in the exhibition. It was produced sometime between 1513 and 1525 for Henry VIII and Katherine of Aragon in the workshop of Petrus Alamire, contains 28 motets, and is magnificently decorated with Tudor heraldic emblems and Katherine of Aragon’s pomegranate. 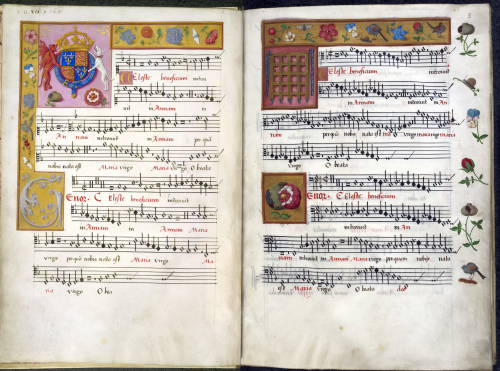 A book of choral music made for Henry VIII and Katherine of Aragon, decorated with the Tudor royal arms and heraldic emblems: Royal MS 8 G VII, ff. 2v–3r

Gold and Glory: Henry VIII and the French King runs at Hampton Court from 20 May to 5 September 2021.