The Master of Edward IV

The British Library continues to acquire medieval manuscripts with important research potential to enhance the national collection. You may have seen that last year we announced the acquisition of the Lucas Psalter (Add MS 89428), a fascinating late medieval Psalter made in Bruges for an English patron, which contains the added arms of Thomas Houchon Lucas (1460-1539) of Suffolk, the secretary to Jasper Tudor, and Solicitor General under Henry VII. Now that the Library has reopened, we have digitised the manuscript which you can view in full on our Digitised Manuscripts site. 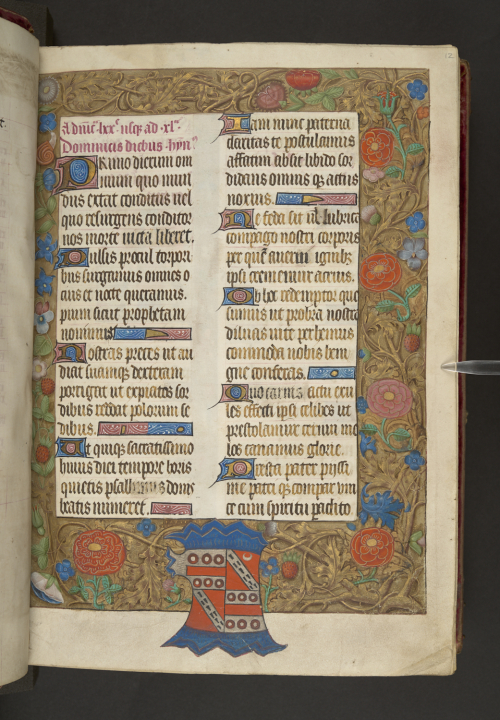 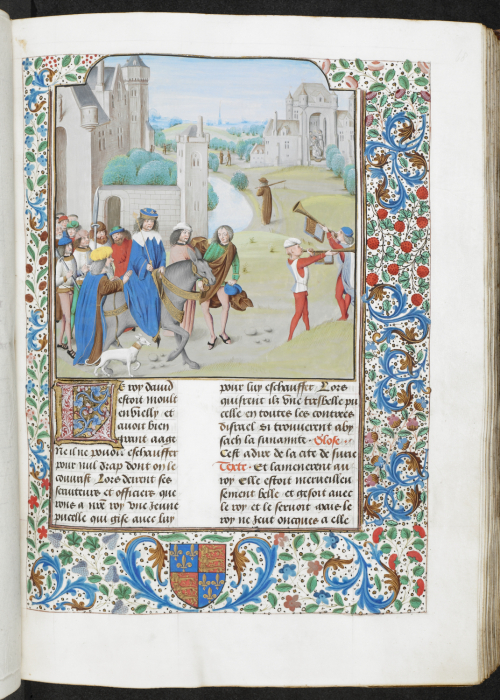 The large majority of these works are illustrations of vernacular and often historical texts. The Master of Edward IV is known for his finely painted figures and landscapes, and his talent for compositional invention and concise narrative. His work is clearly identifiable in the Lucas Psalter, in the distinctive carefully executed figures in groups and in a wide range of poses. His figures typically have well-defined faces, with full red lips, rouged cheeks, and distinctive, somewhat messy or unkempt hair, even on royal figures. In the Psalter, for example, these facial features and hairstyles are apparent in the figure of King David and even of God the Father. 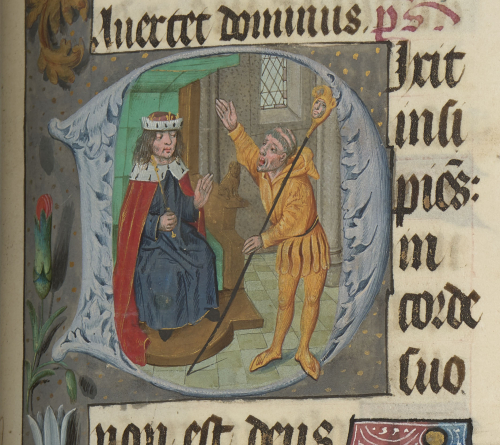 The Master’s characteristic and relatively narrow palette of salmon pink, green lake, grey-blue, and a fully saturated azure is also apparent throughout the miniatures. These colours often are supplemented by brown highlighted in gold, to imitate gold cloth or in backgrounds. Most colours were applied with prominent brushstrokes that add texture and bulk to the forms.

Moreover, even though the miniatures are typically only six lines long, they are delicately and precisely executed, with attention to interior architectural features in atmospheric perspective. The landscape background of Psalm 68 is particularly fine, with a supplicant figure immersed in water, illustrating the Psalm text, ‘Save me, O God: for the waters are come in even unto my soul’. Here we see the artist’s mastery of mirror-like water, distinctive rocks in the path, and bushes with subtle gold highlights. 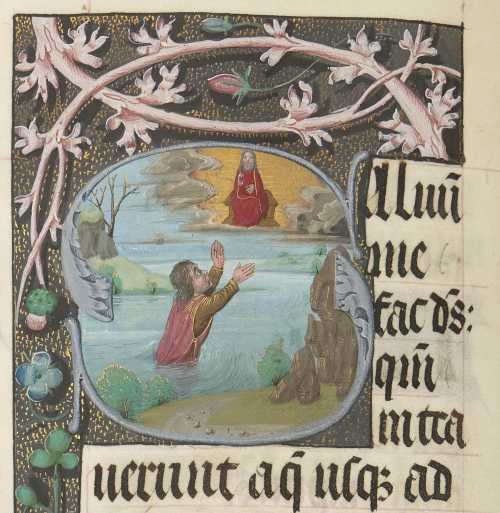 The composition and subject of these initials often are innovative and unusual. For example, the Beatus initial of Psalm 1 features God the Father with a grey beard and wearing a papal tiara in heaven being worshipped by standing angels, with finely painted red cherubim surrounding a golden background. 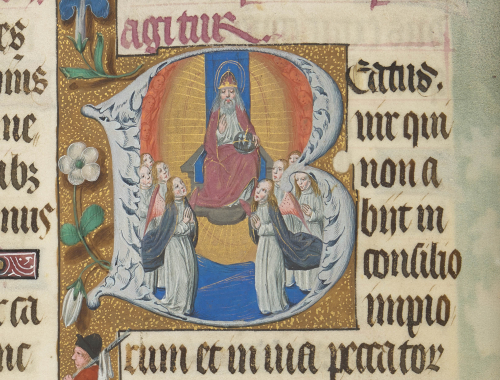 A much more common subject for this Psalm is David with his harp in prayer before God, reflecting an interpretation of the Blessed Man as David, or David as the author of the Psalms. This is the image that appears in a contemporaneous Hours, also made in Bruges for an English patron, painted by the Master of Anthony of Burgundy (Philadelphia, Free Library, Lewis MS E 182, f. 7r). 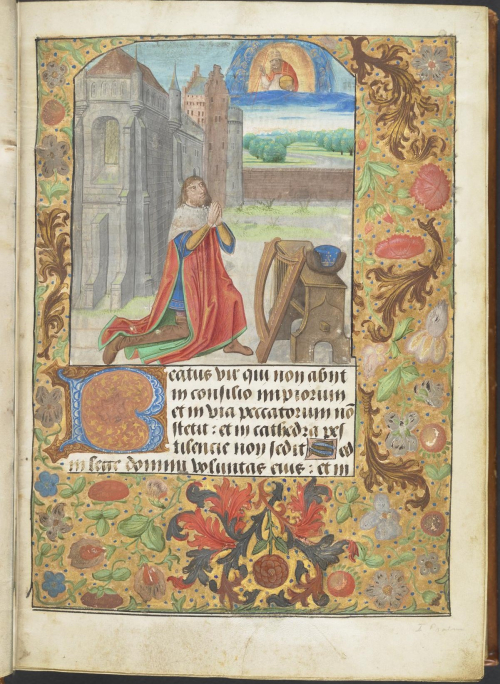 Similarly, the depiction of David in the water clothed and without a crown at Psalm 68 is unusual, and may allow the reader to imagine himself as the supplicant praying for deliverance (see image above).

As in Psalm 1, the image illustrating Psalm 109 pictures God the Father, here with Christ, but against a shimmering gold background rather than in the more common micro-architectural setting (as in the Lewis Psalter, above), indicating that this is an otherworldly image of heaven. 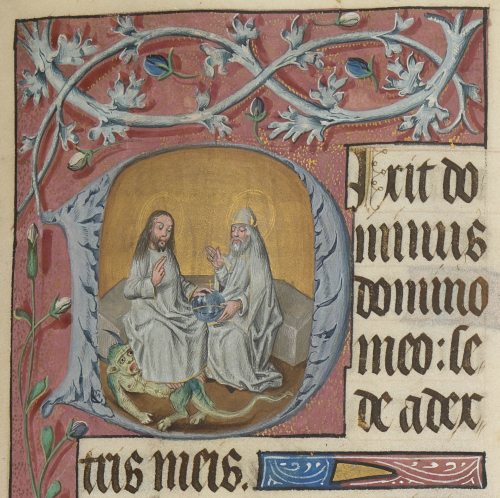 Now that the Lucas Psalter is in the collection of the British Library and fully digitised online, it is possible to admire and compare the works of the Master of Edward IV as never before. We hope that this will inspire new research into this fascinating artist in the future.

For the most recent discussion of this Master’s work, we recommend Scot McKendrick’s article ‘Contextualising the art and innovations of the Master of Edward IV in the Blackburn Hours (Blackburn Museum and Art Gallery, Hart MS 20884)’, in A British Book Collector: Rare Books and Manuscripts in the R.E. Hart Collection, ed. by Cynthia Johnston (London: University of London, 2021), and his earlier exhibition catalogue with Thomas Kren, Illuminating the Renaissance: The Triumph of Flemish Manuscript Painting in Europe, ed. by Thomas Kren and Scot McKendrick (Los Angeles: Getty Publications, 2003), pp. 295-305, which is freely available from the Getty Publications Virtual Library.