To mark Midsummer's Day (24 June), we're taking a look at one of the sources for William Shakespeare's A Midsummer Night's Dream, as illustrated in some of the British Library's manuscripts — the legend of Pyramus and Thisbe.

You may be familiar with Shakespeare's play-within-a-play in Act V of The Dream, in which a band of 'mechanicals', played by Bottom and others, re-enact the tale of Pyramus and Thisbe. A Midsummer Night's Dream was written most probably in the 1590s — the First Quarto was published in 1600 — but the 'mini-play' featuring the parts of Pyramus, Thisbe, the Prologue, the Lion, Moonshine and the Wall has much older origins.

The story of the ill-fated lovers first emerges in its 'modern' form in Ovid's Metamorphoses, completed in AD 8. Pyramus and Thisbe lived in adjoining houses in Babylon, but were able to communicate only through a crack in the wall, due to their parents' rivalry. They arranged to meet near a mulberry tree, by the tomb of Ninus (the mythical founder of Nineveh), but Thisbe was disturbed by a lioness and fled, leaving behind her blood-stained cloak. When Pyramus discovered it, he assumed that Thisbe had been killed by a wild beast and fell on his sword, staining the white fruits of the mulberry tree with his own blood; Thisbe then returned and killed herself in turn with her lover's sword. The gods heard her dying lament and changed the mulberry fruits to their new dark shade in honour of the lovers.

In this 15th-century French translation of Ovid's text, known as Ovide moralisé, Thisbe is shown standing over Pyramus's body, in front of a mulberry tree and beside a fountain, stabbing herself with his sword. Shakespeare's deliberately muddled version of the legend is perhaps the best-known adaptation, but a number of medieval authors also recounted the tale of Pyramus and Thisbe. It turns up in Giovanni Boccaccio's Decameron, completed in the 1350s, and in his De claris mulieribus (On Famous Women), dating from 1361–62. In this 15th-century French translation of De claris mulieribus (Des cleres et nobles femmes), a red-gowned Thisbe is shown piercing her neck with the sword (this tale is not for the squeamish), with the walls of Babylon in the background. 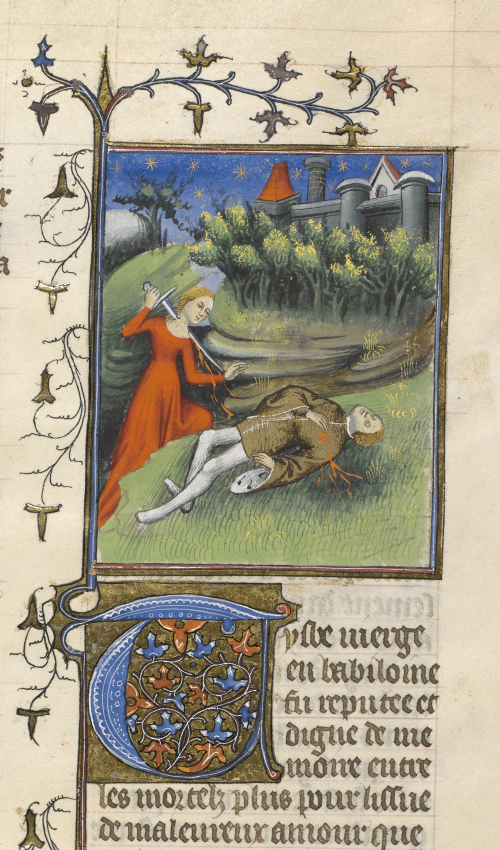 Geoffrey Chaucer in The Legend of Good Women (1380s) and John Gower in his Confessio Amantis, composed at the request of King Richard II (1377–1399), rendered the tale of Pyramus and Thisbe for the first time in English. But it is Christine de Pizan's The Book of the Queen (Harley MS 4431) which supplies perhaps our favourite medieval image of this story. Illustrating her L'Épître Othéa is this miniature depicting the suicide of the lovers. To the rear, a lion is tearing with its teeth at Thisbe's cloak. In the foreground Pyramus lies prostrate beside a fountain, clutching his heart, while an ashen-faced Thisbe has plunged the sword through her chest, penetrating her back, and is about to fall to the earth. Behind them grows the mulberry tree and to their rear is what may be taken for the wall through which they communicated. Christine herself was the scribe of part of this manuscript, which was made for Queen Isabeau of Bavaria (d. 1435), the wife of King Charles VI of France (1380–1422). 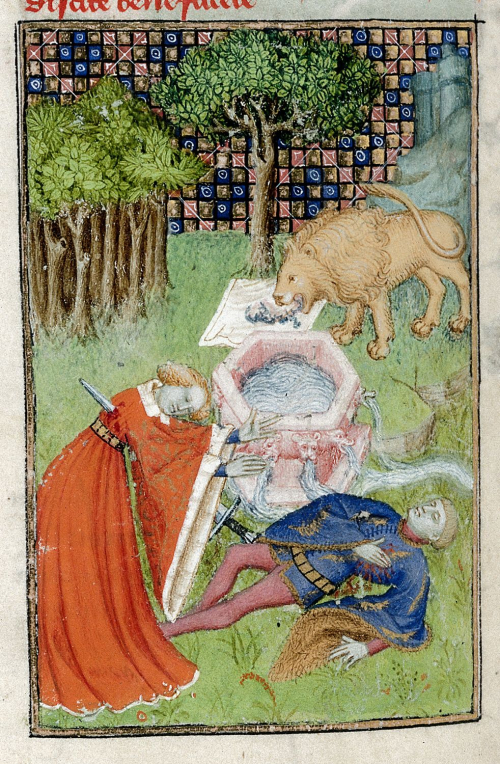 William Shakespeare's rendering of this episode in A Midsummer Night's Dream is more comical than tragic. The guests at the wedding of Duke Theseus and Queen Hippolyta are highly amused by the performance. Theseus turns down the chance to hear the prologue, 'for your play needs no excuse', and the actors finish with a dance. Happy ever after ... but far removed from the original macabre fate of Pyramus and Thisbe.