Vengeful, merciless and brutally violent... yes that’s right, we’re talking about medieval bunnies. Rabbits can often be found innocently frolicking in the decorated borders or illuminations of medieval manuscripts, but sometimes, for reasons unknown, these adorable fluffy creatures turn into stone-cold killers. These darkly humorous images of medieval killer bunnies still strike a chord with modern viewers, always proving a hit on social media and popularised by Monty Python and the Holy Grail’s Beast of Caerbannog, ‘the most foul, cruel, and bad-tempered rodent you ever set eyes on!’.

While re-cataloguing the Arnstein Passional, made at Arnstein Abbey in Germany around the 1170s, for the Harley cataloguing project, we spotted a particularly early example of killer bunny imagery (could it be the earliest known?). This decorated letter ‘T’ is being used as a gallows on which two rabbits or hares hang a human hunter. His identity is made clear by the hunting horn slung over his shoulder. The rabbits stand on their hindlegs and point with their front paws as if jeering in sinister glee. 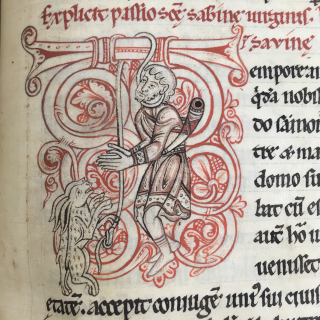 This image gives us a clue about why medieval artists showed rabbits behaving so violently. In real life, rabbits and hares are docile prey animals. But in decorated initials and marginalia, medieval artists often depicted ‘the world turned upside down’, where roles are reversed and the impossible becomes the norm. So here, rabbits are violent hunters hellbent on punishing anyone who has committed crimes against rabbit-kind.

Perhaps the most elaborate example of the killer bunny theme appears in the Smithfield Decretals, illuminated in London in the 1340s. This manuscript contains multiple series of marginal scenes in which stories unfold over consecutive pages like a comic strip. In this series of scenes, we see how a group of giant beefy rabbits get their gruesome revenge on a hunter. First a rabbit archer shoots the hunter in the back, then the rabbits tie him up and haul him before a rabbit judge to be tried. After a guilty verdict is delivered, the ruthless rabbits drag the hunter away and behead him. 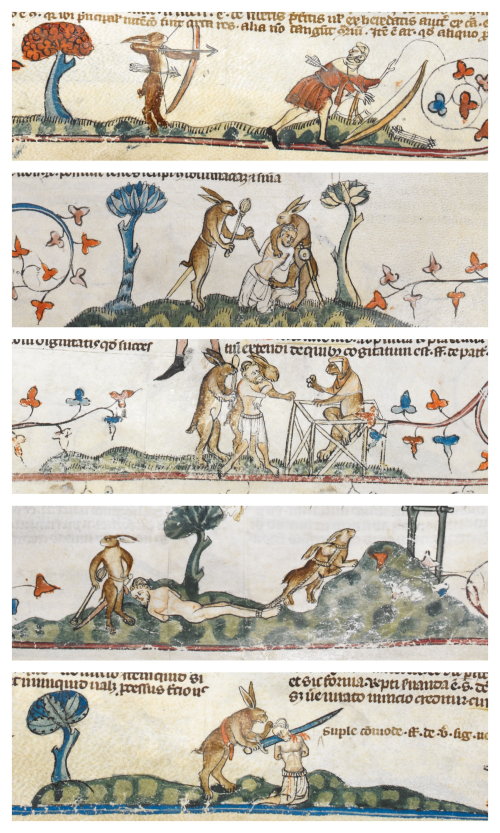 Not content with inflicting punishment on the hunter, the fluffy ruffians then set their sights on a hound. Hounds were widely used for hunting rabbits and hares, making them prime targets for bunny vengeance. In a series of scenes mirroring the previous ones, the rabbits are shown shooting the hound with arrows, tying him up, trying him at rabbit court, carting him away and then hanging him. 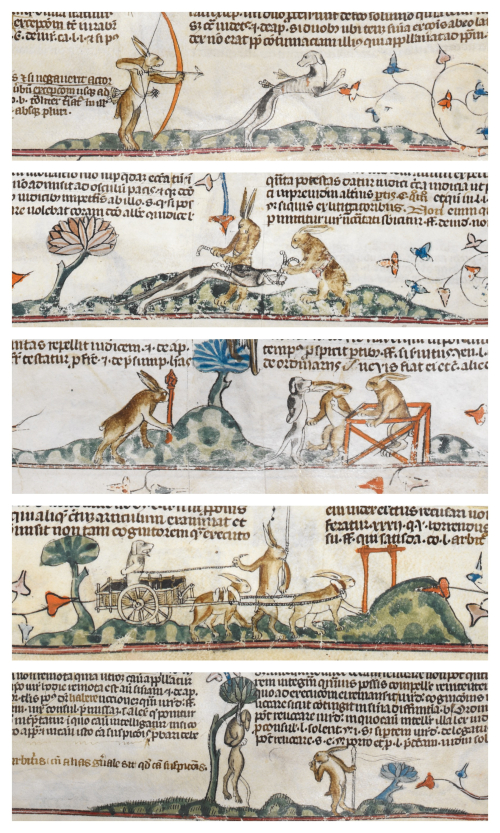 Another rabbit goes hunting for hounds in this Book of Hours made in England in the 1320s. On one page the rabbit sets out with a full quiver of arrows, blowing on a hunting horn. On the other side of the page he returns triumphant with his arrows used up and a small hound strung up on the end of his bow. 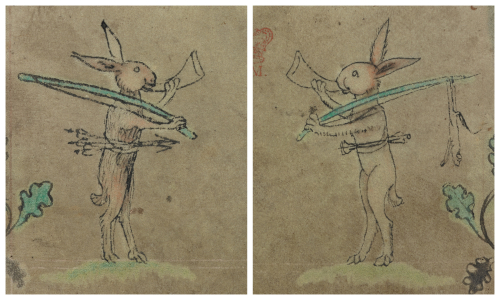 Some rather more chivalrous rabbits engage in knightly combat with hounds in the margins of the Breviary of Renaud de Bar, made in Metz in France between 1302 and 1303. Here they take up lances, swords and shields and do battle. In one instance a bunny rides on the back of a snail while the opposing hound rides on the back of a bunny who looks like he’s just noticed with some puzzlement that he’s fighting on the wrong side. 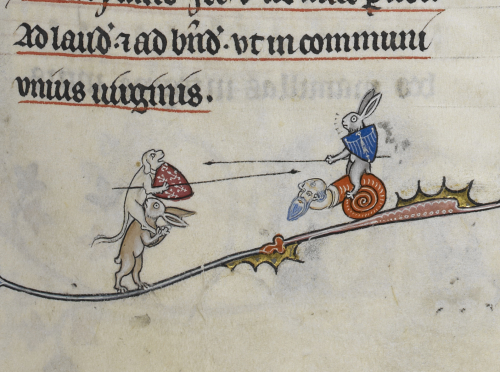 A hound riding on a rabbit and a rabbit riding on a snail battle with shields and lances. The Breviary of Renaud de Bar (Winter portion), Metz, France, 1302-03: Yates Thompson MS 8, f. 294r 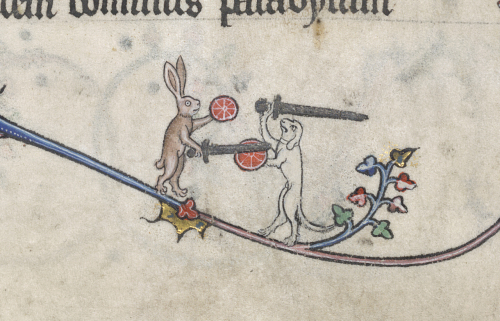 But the rabbits don’t stop at conquering their traditional foes. Having got a taste for warfare, they are ready to take on any adversary. Like the Beast of Caerbannog, these savage rodents could strike fear into the heart of even the bravest knight. 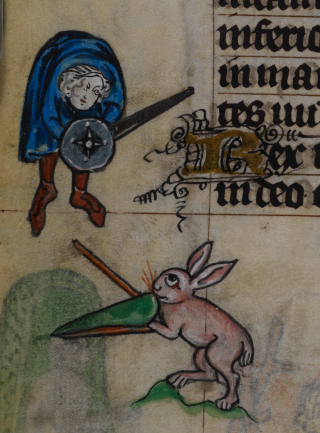 A man and a rabbit approach one another with swords and shields. The Maastricht Hours, Liège, Belgium: : Stowe MS 17, f. 240v

They rampage through the manuscript margins, wielding axes and taking on anyone unfortunate enough to cross them. 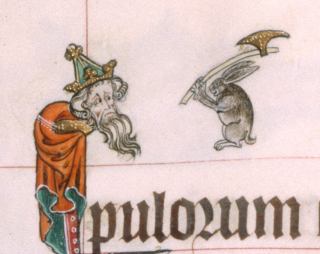 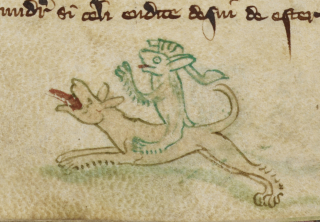 Given the murderous reputation of medieval rabbits, the demonic expression on the face of this bunny baker raises alarming questions about the nature of his baked goods. Surely those aren’t human pies... are they? 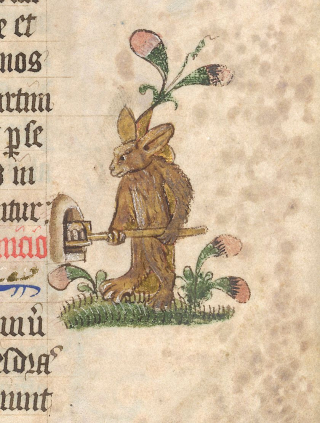 A rabbit pushes a tray of baked goods into an oven. Pontifical, England, 1st quarter of the 15th century: Lansdowne MS 451, f. 6r

Luckily, unlike their counterparts in medieval marginalia, 21st-century rabbits are sweet and harmless. But these medieval images remind us to always treat rabbits with respect – you never know when they might decide it’s time to strike back!

For more medieval rabbits, check out our previous blogpost on Medieval rabbits: the good, the bad and the bizarre. If you’d like to read more about the strange world of medieval marginalia, take a look at past blogposts such as Ludicrous figures in the margin, 'Virile, if somewhat irresponsible' design, and the ever-popular Knight v Snail.