From a relatively early date in the Latin West, luxury Psalters featured cycles of introductory or prefatory full-page images. Very often these focused on the life of Christ, although other subjects such as the Creation and King David were also featured. It is likely that these cycles of images grew out of the interpretation of the Psalms as a prefiguration of Christ’s life, death and resurrection. This concept reflects Jesus’s comment that ‘all things must needs be fulfilled, which are written in the law of Moses, and in the prophets, and in the Psalms, concerning me’ (Luke 24:44). 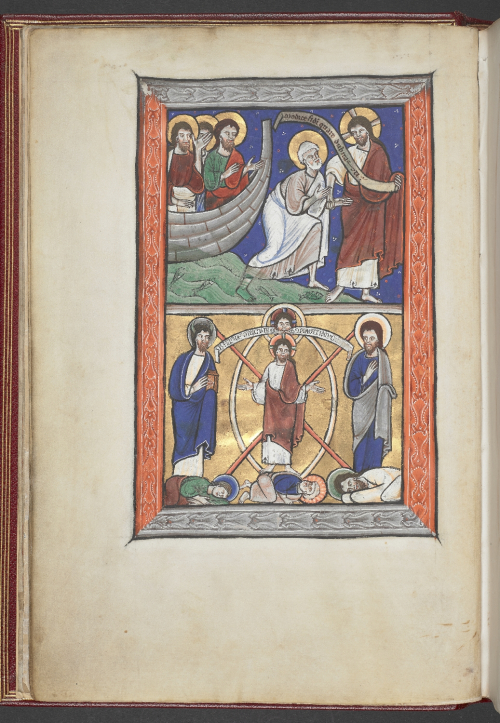 One large and impressive Psalter features twenty full-page prefatory images. It was probably made in Oxford because the calendar following the miniatures includes a reference to the translation (or reburial) of St Frideswide, the patron saint of Oxford, in 1180. The absence of another important event, the translation of St Thomas Becket of Canterbury into a new shrine in 1220, suggests that this manuscript may have been made before that occurred.

In this Psalter each illuminated page contains two scenes that illustrate events from the life of Christ. Sometimes the images include scrolls with biblical quotations that supplement and interpret the paintings, perhaps indicating that the original owner of the book may have been able to read Latin or would have viewed it with someone who could. For example, in the upper register of this image Christ walks on water and St Peter attempts to follow, but he is starting to sink into the sea. The banner proclaims ‘Modice fidei quare dubitasti’ (O thou of little faith, why didst thou doubt?) (Matthew 14:31). 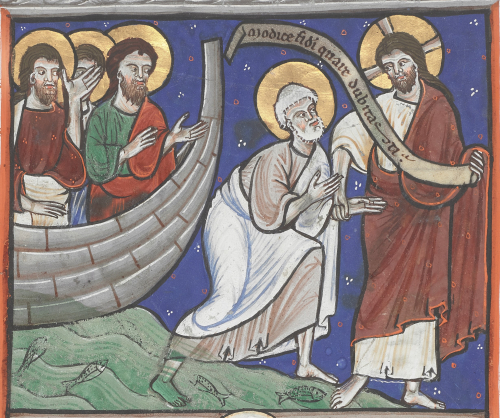 In the lower register of the same image is the Transfiguration, during which Christ, flanked by Moses and Elijah, is ‘transfigured’ to appear in glory to Sts John, Peter and James, all kneeling below. Christ is enclosed in an almond shape mandorla, which was often used to frame and signify Christ in Majesty. Moses, to his left, is identifiable by the horns on his head. This attribute is based on the account of Moses’ descent from Mount Sinai in the Latin Vulgate Bible, which says that ‘he knew not that his face was horned from the conversation of the Lord’ (Exodus 34:29), where the Hebrew word ḳaran was mis-translated as horned (the word can also mean ‘to radiate’). 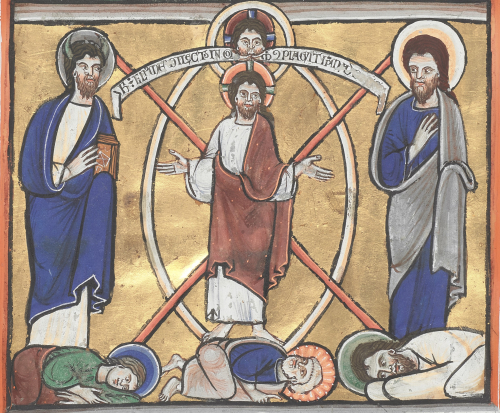 Another interesting aspect of the cycle in this manuscript is the use of silver, which unlike many medieval examples has not tarnished to black. This is particularly apparent in the sword and armour of the soldier who raises his sword to murder a young boy in the illustration of the Massacre of the Innocents. The mail of the soldier’s helmet, body armour and greaves (leg armour) is all carefully delineated and the silver retains its sheen. 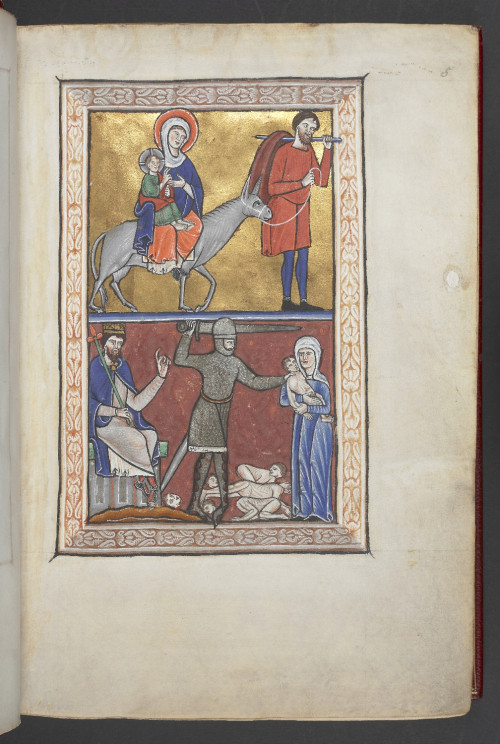 The vivid images that preface the Psalms thereby enhance the devotional experience of reading and meditating on the Psalms, as well as providing a visual commentary on the biblical text. This beautiful Psalter was digitised as part of the Polonsky Medieval England and France 700-1200 project and you can find out more about English manuscript illumination on the project website.