During the medieval period, the monastery of St Albans was recognised throughout England for the quality of its chroniclers. Between the 12th and 15th centuries, monks from the foundation recorded the events of English history, especially those that affected the Abbey and its holdings in the surrounding area. They included such figures as Roger of Wendover (d. 1236), William Rishanger (b. 1250), Matthew Paris (d. 1259), Thomas Walsingham (d. c. 1422).

A new exhibition, Chroniclers of History, has opened at St Albans Museum, which explores the lives and works of these men and the importance of their monastery. The British Library is delighted to be one of the major lenders to the exhibition, and the following six books from our collections will all be on display at the museum’s Weston Gallery from 30 July - 31 Oct 2021. 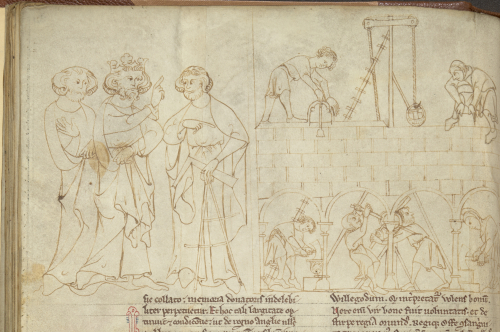 One of the highlights is a work known as the Benefactors’ Book of St Albans (Cotton MS Nero D VII). In a previous blogpost, we described the manuscript as a who’s who of medieval England. It represents an invaluable source for our understanding of the history of the monastery and its influence throughout the country. Initially compiled by the Abbey’s precentor, Thomas Walsingham, the book is a register of all the people who made gifts to St Albans throughout the Middle Ages, as well as the abbots, monks and laypeople who made up its vibrant community. The manuscript preserves their names, details about their lives and occupations, and for many even their portraits, which might otherwise have been lost to us. The page on display shows the artist, Alan Strayler, who is responsible for these portraits. 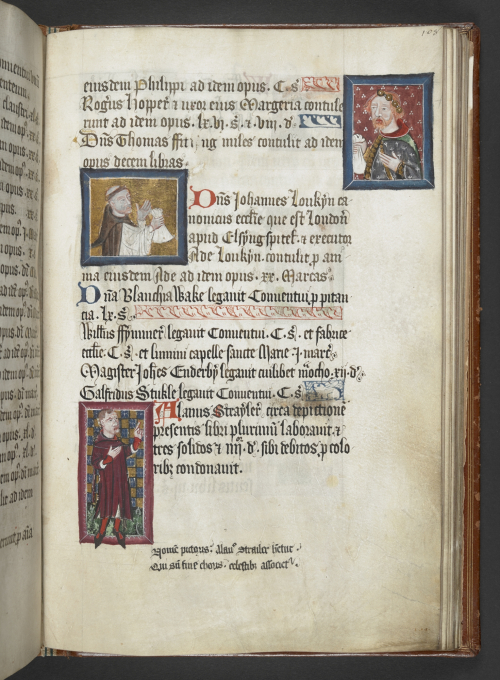 St Albans was responsible for the production of hundreds of manuscripts between its foundation and dissolution in the 16th century. This copy of the Latin work De Trinitate (On the Trinity) by St Augustine, for example, was made at the monastery during the second half of the 12th century (Egerton MS 3721). It is prefaced by a calendar, commemorating the feast days of important saints throughout the year. Feast days for local saints connected with the Abbey are also recorded here, most notably St Alban himself, as well as several of the monastery’s former abbots. 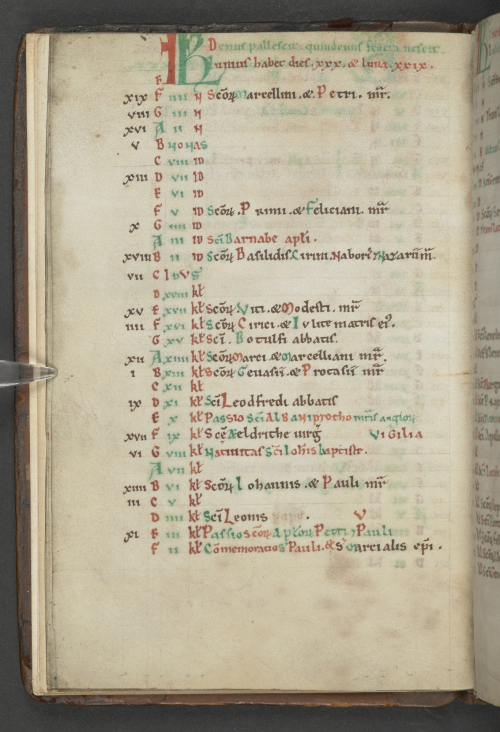 A calendar page for June, from a manuscript of St Augustine’s De Trinitate (On the Trinity), made at the monastery of St Albans: Egerton MS 3721, f. 4v

The Collectanea of John of Wallingford

Among the many chroniclers represented in the exhibition is the monk John of Wallingford (d. 1258). John was the infirmarer of St Albans (responsible for looking after the Abbey’s sick) and a friend and contemporary of Matthew Paris, another chronicler based at the Abbey. John is mostly known to us because of his Collectanea, surviving in a single manuscript, which comprises a huge variety of material, some written in his own hand (Cotton MS Julius D VII). Medical recipes in Middle English, copies of charters and documentary texts, John’s own chronicle of English history, and even a table for predicting the time of high tide at London Bridge, all appear in the collection. In addition to these works, the manuscript features a map of Britain and several drawings made by Matthew Paris, including a portrait of John of Wallingford himself, sitting before an open copy of the Book of Psalms. You can read more about the manuscript and Paris’ map in our previous blogpost, The Maps of Matthew Paris. 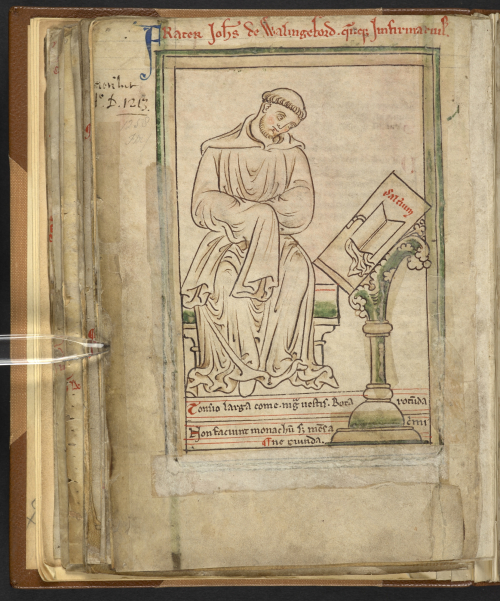 A portrait of the chronicler John of Wallingford, made by Matthew Paris, from a copy of Wallingford’s Collectanea: Cotton MS Julius D VII, f. 42v

Matthew Paris was renowned for his work as a chronicler, cartographer, artist, and scribe, both during his lifetime and for centuries after his death. Numerous surviving books show evidence of his hand and the influence of his distinctive style of drawing and painting, many of which are now housed at the British Library. His notable works include the Chronica Maiora, a universal history of the world, and Historia Anglorum, a history of England, both of which he copied and illuminated himself.

Paris’ Liber additamentorum (Book of Additions) is one of the manuscripts that can be found on display at the exhibition at St Albans Museum. The volume (now Cotton MS Nero D I) is a collection of original literary treatises and documents he assembled to support his research. Among the various texts, notes, tracts, and drawings it contains is his Gesta abbatum monasterii sancti Albani, a record of the lives and deeds of the abbots of St Albans. Paris drew a portrait of each of the subjects of his work, which appear as illustrations in the margins beside each of their respective entries. The page below, for example, features a portrait of Leofric, who served as abbot towards the end of the 10th century, and whom Paris identifies in an accompanying inscription in red ink, written in his own distinctive hand. 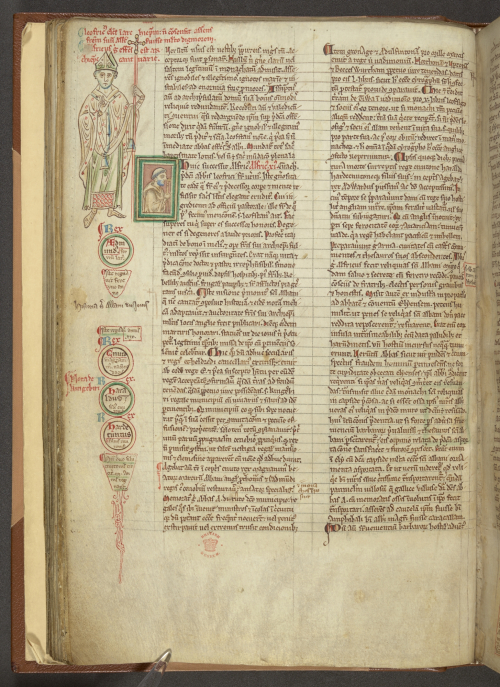 Another of Paris’ contemporaries was Ralph of Diceto (d. c. 1200), a chronicler and dean of St Paul’s Cathedral in London. Ralph was particularly known for a Latin chronicle, written and arranged in two parts. The first is called the Abbreviationes chronicorum (Abbreviations of chronicles) and it constitutes a summary of existing chronicles already circulating in England during the 12th century. It covers the history of the world from the birth of Christ to around 1147. The second part, meanwhile, is entitled the Imagines historiarum (Images of History) and records events that occurred during Ralph’s own lifetime . 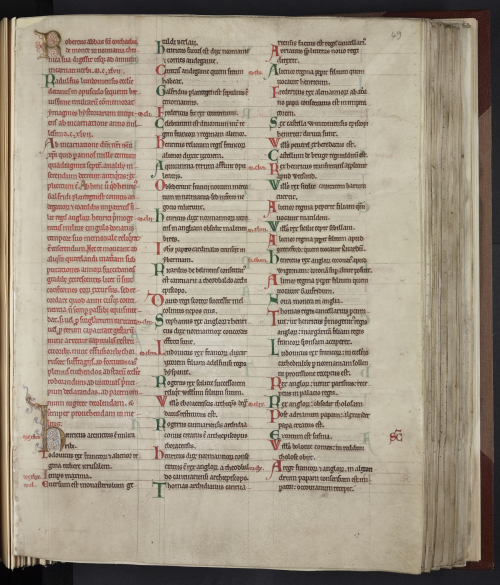 One manuscript in the British Library (Royal MS 13 E VI), made between 1199 and 1209, contains copies of both these chronicles, complete with an innovative pictorial indexing system that Ralph invented. It has been suggested that this volume was made for the Abbey of St Albans and that it was copied from an original housed in St Paul’s, believed to have been Ralph’s personal copy of his works. Numerous additions related to St Albans have been inscribed in the margins of the text: a shelfmark identifying that it was part of the Abbey’s monastic library, marginal notes concerning important events in the Abbey’s history, the obits (or dates of death) of some of its abbots, and even notes and a drawing made by Paris himself. 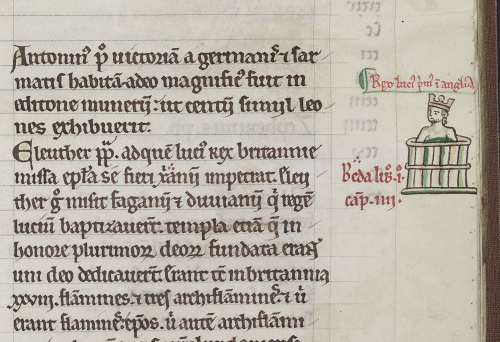 A marginal illustration of Lucius, a legendary King of the Britons, added into a manuscript of Ralph of Diceto’s chronicles, made by Matthew Paris: Royal MS 13 E VI, f. 11r (detail)

The Chronicles of England, printed by the Schoolmaster Printer

While the monastery of St Albans was known for its production of handwritten books and manuscripts, in the later medieval period the city also housed a printing press, notable for being one of the first to operate in England outside of Westminster and London. The name of the printer remains unknown, and many have speculated about his true identity. One of the only hints we have originates from the famous English printer Wynkyn de Worde (d. 1534), who once described him as a ‘Sometime schoolmaster’. Since then, he has typically been referred to as the ‘Schoolmaster Printer’.

This particular volume was made by the St Albans press around 1486 and contains the Chronicles of England, written in Middle English and one of the very first chronicles to be printed in the country (C.11.b.1*). It features a number of woodcut illustrations throughout the text, and on the final page, there appears a printer’s device (or emblem), bearing the arms of the Abbey and the town of St Albans, in red ink. The Chronicles of England, made by the ‘Schoolmaster Printer’, showing the printer’s device with the arms of the abbey and town of St Albans: C.11.b.1*, p. 575

The records of the chroniclers featured in this exhibition are the basis for much of our understanding of England during the Middle Ages, and without their work, our knowledge of early English history would be far poorer. Their texts and manuscripts provide an insight not only into the major events that affected the Church and the Crown in this period, but also how these events affected people at a local level.