Medieval manuscripts come in all shapes and sizes: handy books for personal reading, mid-size volumes for the library or classroom, staggeringly huge tomes for the choir or lectern. But manuscripts that are extra tiny are especially rare and fascinating. Miniature books wow us with the skilfulness of their delicate script and puzzle us with the question of "why so small?". What motivated people to make books with pages so petite that they take all your dexterity to turn, and script so minute that you have to strain your eyes to read? Inspired by the British Library’s current Miniature Books exhibition, we thought we'd explore some of our teeny tomes. 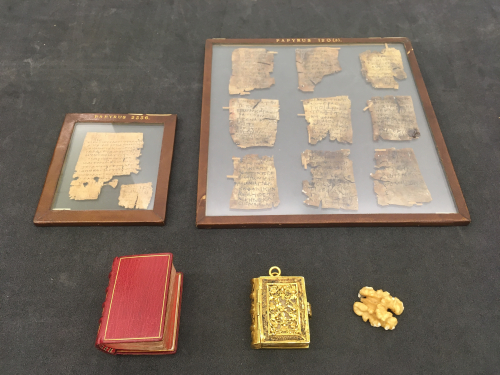 Definitions vary, but books measuring under 3 or 4 inches (76 or 101 mm) on their longest side are generally considered miniature. The earliest books of these dimensions in the British Library are leaves which once formed part of miniature codices from Roman Egypt, written in Greek. A papyrus example, dating from the 3rd century and containing a fragment of the Psalms, measures 73 x 56 mm (Papyrus 2556). Discussing why miniature books appealed to Christian owners in the late Roman Empire, scholars have suggested that they might have been particularly useful for carrying on travels, or for wearing close to the body as religious amulets, or for discretely hiding in times of persecution. 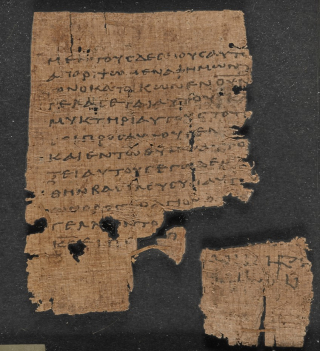 Nine parchment leaves, each measuring about 68 x 45 mm, once formed a complete codex from 6th century-7th century Egypt (Papyrus 120 (3)). These diminutive pages of Greek writing contain a hymn to the Nile with a prayer for the flood, the Niceno-Constantinopolitan Creed and Psalm 132 (133). Its small dimensions, short length and texts which were believed to have particular potency suggest that it may have been used as an amulet. 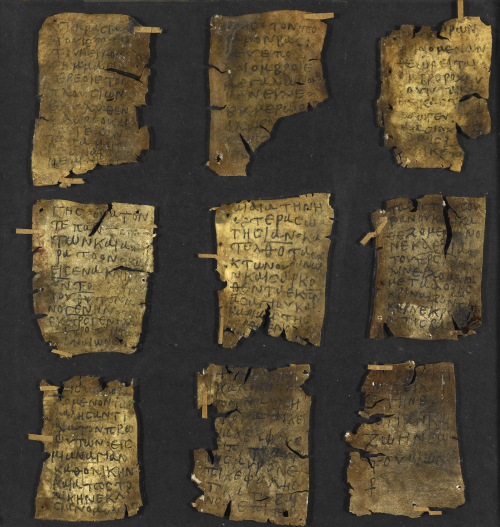 Miniature books had a novelty value, prompting writers to comment on them as marvels. For example, Pliny the Elder, citing Cicero, reports in his Natural History (AD 77) that there was a copy of Homer's Iliad written on a piece of parchment so small that it could fit inside a walnut shell. Later scribes were inspired to try and match this ancient achievement, including the 16th-century English calligrapher Peter Bales. A note written in 1586/7 describes ‘A most strange and rare piece of worke brought passe by Peter Bales, an Englishman, a Clerke of the Chauncery of the proofe and demonstracioun of the Whole Bible to be written by hym everie word at length within an English Wallnut no bigger then a hennes egg’ (Harley MS 530, f. 14v). Sadly Bales’ tiny Bible doesn’t survive. None of our miniature books can rival these impressive walnut-sized feats (see the image at the top of this blogpost). 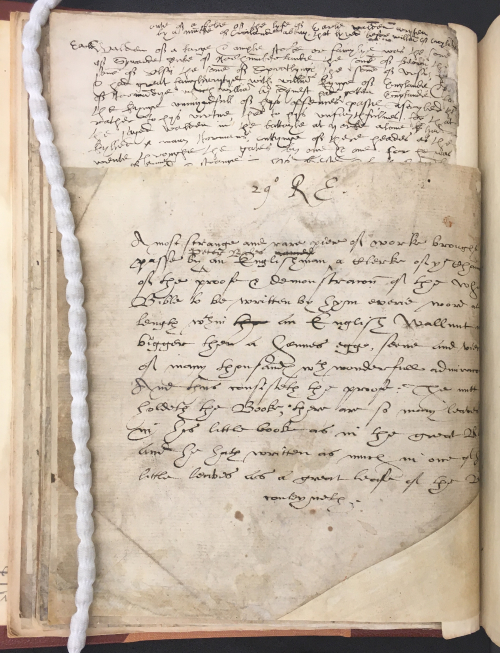 A note describing a Bible manuscript that could fit inside a walnut written by Peter Bales. England, 1586/7. Harley MS 530, f. 14v.

Display of scribal skill might have motivated the creation of an illuminated 15th-century Book of Hours measuring only 54 x 40mm (Add MS 58280). Unusually, the scribe, Roger Pynchebek, signed his name at the end of the book: 'Scriptori merita mater pia redde Maria. Amen. Nunc finem feci. Da mihi quod merui. Quod Rogero Pynchebek þe writer of þis boke. In þe yere of our lorde MoCCCC.lxx iiiio' (Affectionate Mother Mary, give to the writer his just reward. Amen. Now I have made an end, give me what I deserve. That is, Roger Pynchebek the writer of this book. In the year of our Lord 1474). Perhaps with this tiny volume, Roger Pynchebek hoped to advertise his impressive scribal skills to prospective clients. 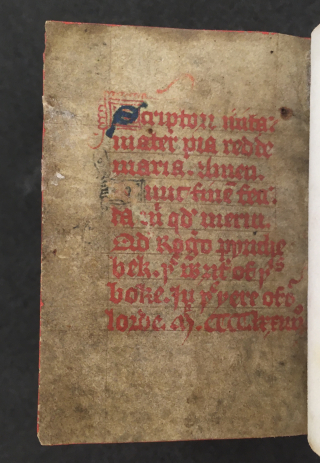 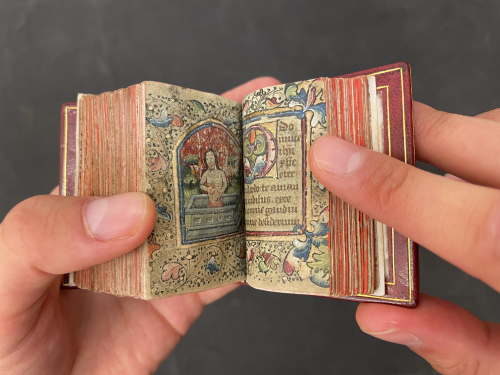 In the 16th century, it became fashionable for aristocratic women to wear miniature prayer books bound in elaborate metalwork covers hanging from their girdles (i.e. belts). These girdle books provided them with handy reading material as well as fashionable dress accessories, allowing them to display their literacy and piety to the world. They are sometimes included in medieval portraits of the period, such as that of Mary Tudor by Hans Eworth. 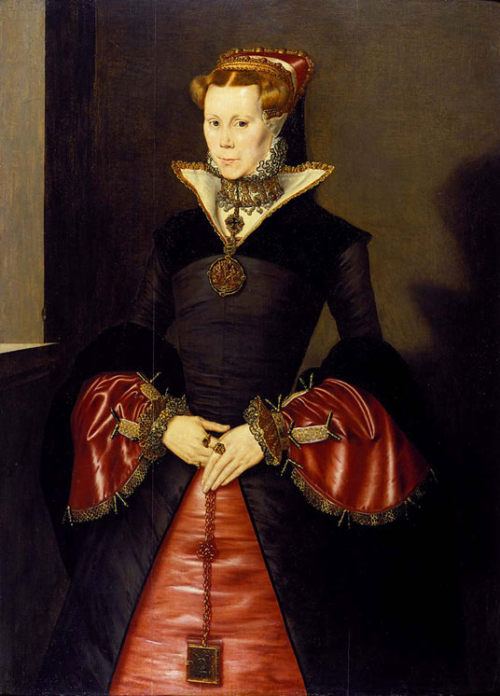 A girdle book made in Paris around 1520 which belonged to a lady at the court of King Henry VIII of England measures a dainty 35 x 20 mm (Sloane MS 116). The book, which contains devotional texts, even includes tiny painted pictures the size of postage stamps, here showing St George slaying the dragon. 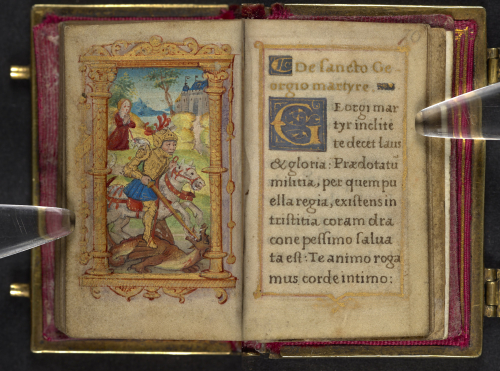 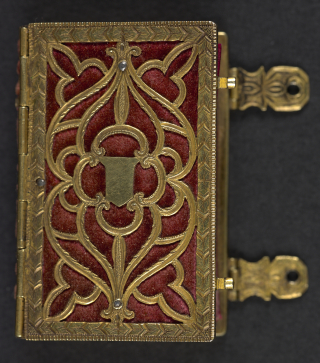 A particularly luxurious example is a girdle book with covers of gold filigree that measures a diminutive 40 x 30 mm (Stowe MS 956). It contains selected Psalms in English verse, translated and apparently written out by John Croke, one of Henry VIII’s clerks in Chancery, with a portrait of Henry VIII at the beginning. The volume is traditionally thought to have belonged to Anne Boleyn, who is said to have handed it to one of her maids of honour when she was standing on the scaffold before her execution in 1536. 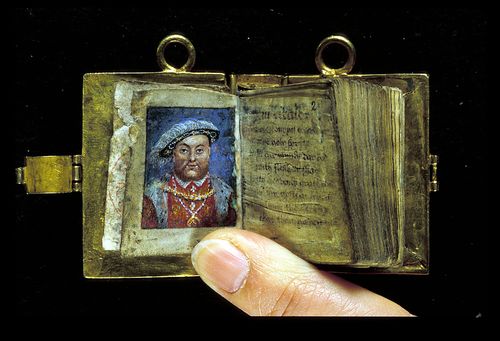 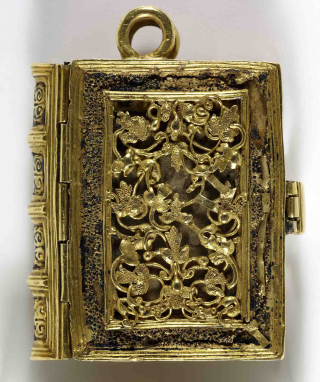 The tradition of miniature books continued into the modern era and up to the present day. You can visit the British Library’s current Miniature Books exhibition for free in the Sir John Ritblat Treasures Gallery. The exhibition includes Sloane MS 116 described above, displayed alongside other miniature manuscripts and printed books from the Library’s historical collections, as well as books created especially for the project by contemporary children’s authors and illustrators, and miniature books submitted by children in response to the British Library's lockdown callout. You can also find out more in the British Library's online event The Magnificent World of Miniature Books (Thursday 22 July 2021, 19:30 - 20:30 BST).