Murder most foul in the Cotswolds

Opening the door of a pretty Norman church down a country lane in the Cotswold village of South Newington, I was shocked to be confronted by two rather violent murder scenes painted on the wall. The first is of a man being viciously cut down while he raises his hands in prayer; his head is split in two by a sword, and blood spurts over his forehead. Though the paintings are rather fragmentary and difficult to make out at first, the figure in the red cloak, his hands raised in prayer is unmistakeably Thomas Becket, Archbishop of Canterbury, who was murdered by four knights in Canterbury Cathedral in 1170, an event that caused a great scandal throughout Christendom.

Beside it is another violent scene that has been identified as the execution in 1322 of Thomas Plantagenet, 2nd Earl of Lancaster, who led a rebellion against King Edward II (r. 1307-1327). He is also shown kneeling while his executioner towers over him, using all his force to chop off his head. Drops of blood spurt from his neck – by one account it took several blows to decapitate him. Both paintings have been dated to the 1330s. 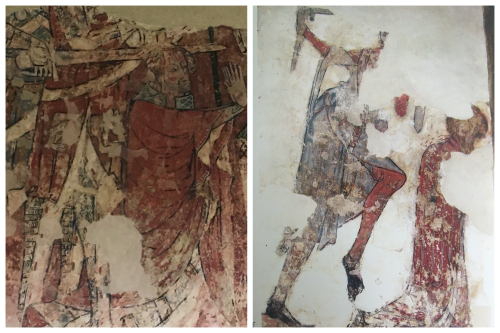 While attempts to canonise Thomas Plantagenet were, not surprisingly, unsuccessful, Thomas Becket was made a saint not long after his martyrdom, and Canterbury became a popular destination of pilgrimage. Two hundred years later, Henry VIII did his utmost to stamp out the cult of Becket and ordered all representations of him to be destroyed. Becket’s face in this painting only survived because it had an image of St George, another popular English saint, painted over it at a later date. It was uncovered and restored in the 20th century.

Had the full scene in the wall painting survived, it may have looked a little like one of the two scenes below. Both are dated to the early part of the 14th century and are in the margins of personal prayerbooks probably made in south-eastern England. The Queen Mary Psalter contains a whole series of more than 20 images from the life and afterlife of St Thomas Becket. 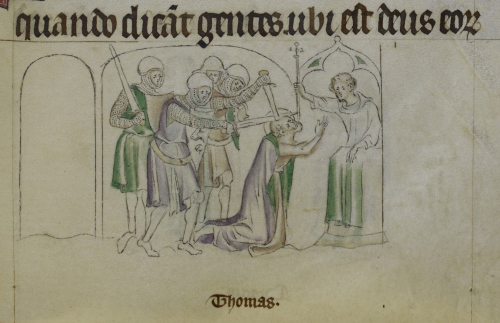 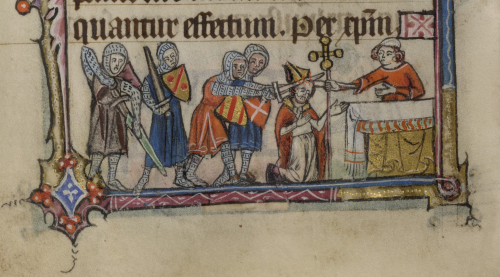 The Taymouth Hours has numerous scenes of the torture and murder of saints across the lower margins. On the other side of the page from Becket is an even more gruesome scene: the martyrdom of St Lawrence, who was burned on a brazier. 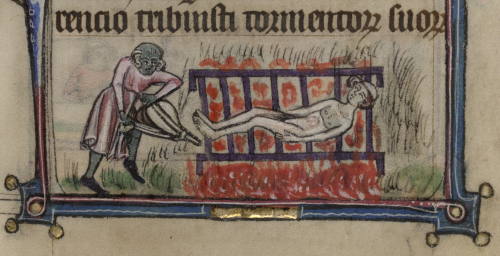 A finely painted miniature from the 15th century of the scene in Canterbury Cathedral shows details of Thomas’s ethereal gaze, the grim facial expressions of the attackers and the elaborately decorated backdrop of the sanctuary. This is from a rather small prayer book (about the size of a Kindle), but the digital images allow us to zoom in and see the exquisite details clearly. 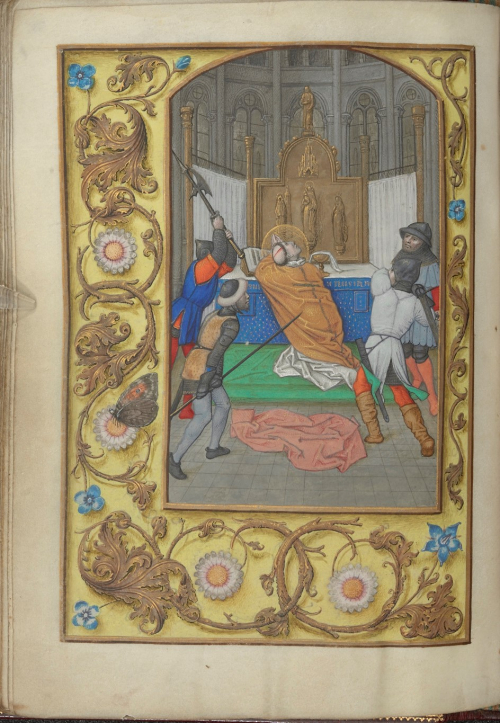 The murder of Thomas Becket at the altar in Canterbury Cathedral in the Hastings Hours: Add MS 54782, f. 55v

As one of the most popular English saints, Becket was frequently depicted alongside other well-known saints. Here in a Psalter from northern England he is shown with two much-venerated female martyrs of the early Church: St Catherine of Alexandria and St Margaret of Antioch. 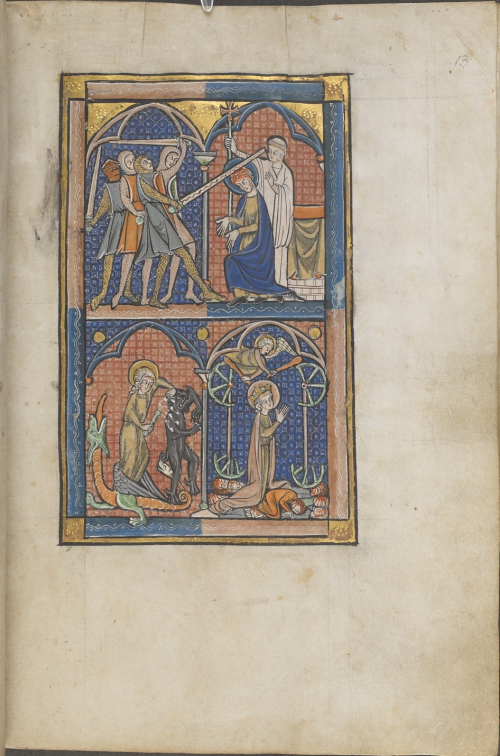 The Murder of Thomas Becket (above); St Margaret emerges from the belly of a dragon, and beats a demon with a whip (lower left); St Catherine prays amidst the dead bodies of the men who attempted to martyr her by breaking her over a wheel, while an angel breaks the wheels with clubs (lower right); in the Huth Psalter: Add MS 38116, f. 13r

My encounter with the image of Thomas Becket in the Cotswolds was timely, as the 850th anniversary of his murder is being marked this summer by an exhibition at the British Museum (postponed from 2020), Thomas Becket: murder and the making of a saint. Included among the objects on display are other British Library manuscripts with scenes from his life and death, featured in our recent blogpost, Thomas Becket: manuscripts showing the making of a saint. There's also more about saints in medieval manuscripts, including Becket, on the Polonsky Medieval England and France 700-1200 project website.

You can also discover amazing images from British Library manuscripts for yourself using the 'Advanced Search' page in the our Catalogue of Illuminated Manuscripts. If you search for ‘Becket’ in the 'Image description' field, twenty-five results are displayed, some from manuscripts in this blogpost. For example, the Queen Mary Psalter (seen above) includes this scene of Thomas Becket being brought into the Lord’s presence by two angels. It is beneath a full-page image of the Trinity in the section containing the Canticles. 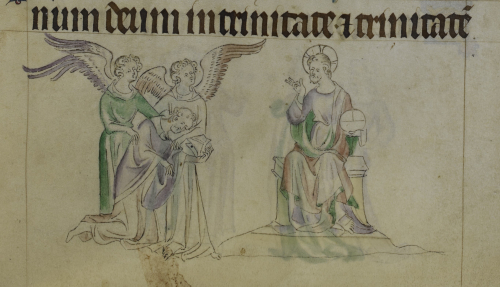 A bas-de-page drawing of Thomas Becket, supported by two angels, kneeling before the Lord, in the Queen Mary Psalter: Royal MS 2 B VII, f. 299r (detail) 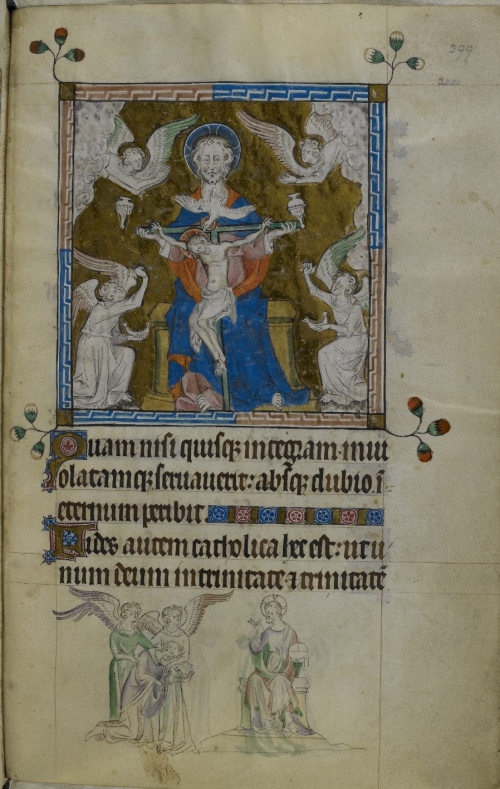 A miniature of the Trinity, surrounded by four angels, with a bas-de-page drawing of Thomas Becket, in the Queen Mary Psalter: Royal MS 2 B VII, f. 299r