The lost miracles of Wulfsige of Evesham

Little is known about Wulfsige (d. 1104 or 1105), also known as ‘Wulsinus’, an important figure of the Benedictine abbey of St Mary the Virgin and St Egwin at Evesham (Worcestershire). Wulfsige reputedly lived at the abbey for 75 years, and was venerated as a saint after his death. According to the Peterborough Chronicle, an Evesham monk named Thomas of Northwich (d. 1206 or 1207) wrote three books about the miracles that had taken place at Wulfsige’s tomb. Until now, no trace of Northwich’s work has been found. However, while cataloguing the Harley manuscripts, we have discovered what seems to be a fragment of this lost miracle collection.

Wulfsige’s miracles in the Peterborough Chronicle: ‘[Wulfsige] at whose tomb many miracles are made by the Lord, which Master Thomas of Northwich wrote down in three books’ (‘ad cujus tumbam multa miracula a domino facta sunt que iij libris scripsit magister Thomas Norwicensis’): Cotton MS Claudius A V, f. 19r (England, 2nd half of the 14th century)

Wulfsige lived at Evesham Abbey as an ‘anchorite’, a recluse who separated himself from the monks in an enclosure. This was either a cell or, according to one source, an underground cavity. Despite his secluded lifestyle, Wulfsige engaged actively with worldly affairs. He allegedly wrote to King Edward the Confessor (1042–1066) urging him to re-found Westminster Abbey, provided spiritual advice to Leofric (d. 1057), Earl of Mercia, and his wife Godgifu (d. ?1067), better known as ‘Lady Godiva’, and persuaded St Wulfstan (c. 1000–1095) to accept the bishopric of Worcester in 1062. Wulfsige’s importance to Evesham is evident from the fact that he was buried in the middle of the choir of the abbey church. The monks celebrated his feast on 24 February.

The feast of Wulfsige in an early 18th-century transcript of a 14th-century Evesham Calendar in Cotton MS Vitellius E XVII, that is now illegible due to fire damage: ‘Wulfsige, a monk and anchorite of this place’ (‘Wlsinus Monachus et Anachorita istius loci’): Lansdowne MS 427, f. 4r

We can now get a glimpse of Wulfsige’s miracles through the discovery of two fragmentary parchment leaves in a 13th-century English manuscript — Harley MS 4242. The leaves record the miracles of a certain ‘Wlsinus’. The old printed catalogue of the Harley manuscripts published in 1808 calls him ‘Walsinus’, but closer examination makes clear that he is none other than Wulfsige. All the miracles are set in or close to the Vale of Evesham. Moreover, in one of them a woman from the village of Wick, who was suffering from a severe headache, identified him as an anchorite: ‘St Wulsinus, anchorite, help me’ (‘Sancte Wlsine anachorita adiuva me’). 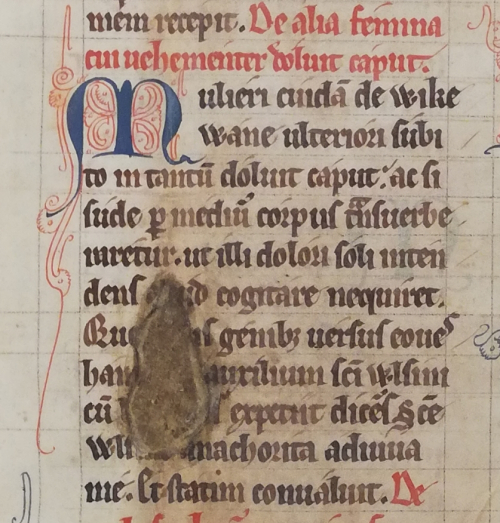 Wulfsige heals a woman of Wick who invokes him as an anchorite: Harley MS 4242, f. 65v

Wulfsige’s miracles typically involved supernatural healing. One tells of a certain Helewisa of Badsey whose entire body was seized by pain. When she was brought to Wulfsige’s tomb to ask for his help, her husband forced her to return to their village. She complied reluctantly, regretting that she had not dared to stay at the tomb for longer. But Wulfsige clearly heard her prayers as she was completely relieved of her pain. 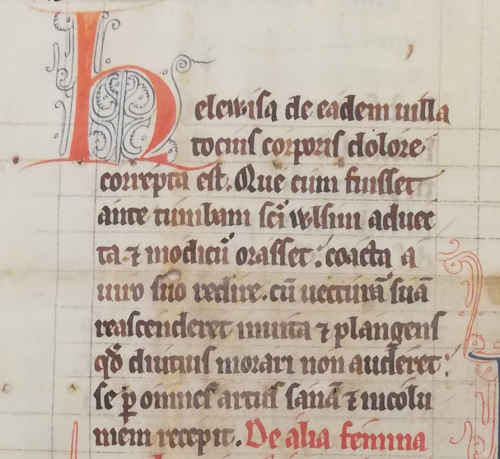 Another miracle concerned a boy of Evesham who suffered from bloody diarrhoea and constantly had to go to the latrine, day and night. When his mother took holy water and dedicated it to Wulfsige, the boy was cured within the same hour. 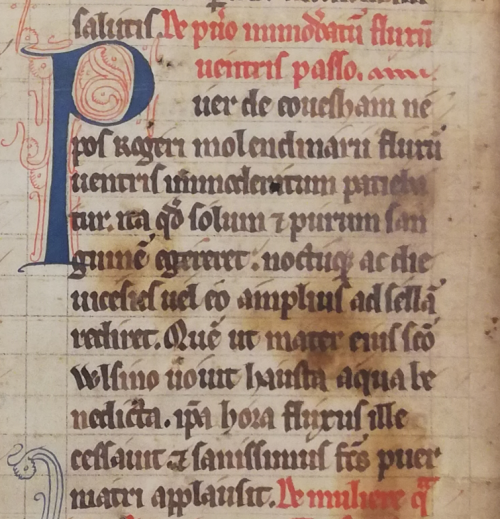 Wulfsige also aided those who prayed for their animals. One miracle tells of a man of Evesham who had been searching for his sow and her piglets for a long time. After he vowed to venerate Wulfsige if his pigs would reappear, he found them the next day. 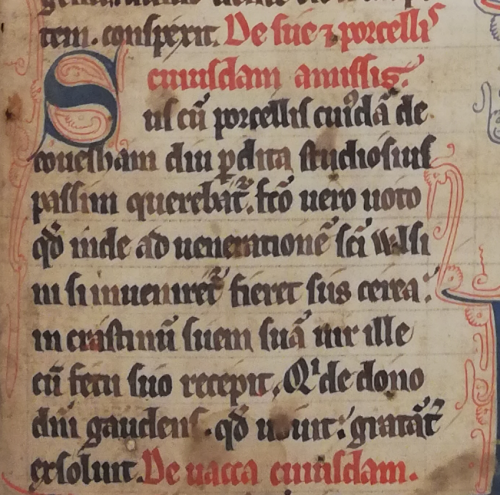 Wulfsige reunites a man of Evesham with his sow and her piglets: Harley MS 4242, f. 66r

In other miracles, the diseased recovered when their bodies were measured in dedication of Wulfsige. One woman was unable to breast-feed her baby, but when she used a cord to measure her breasts in veneration of Wulfsige, they started to lactate. Similarly, a calf of Hugh of Ullington did not eat or walk for two days, but when Hugh used a cord to measure it in Wulfsige's honour it suddenly revived. 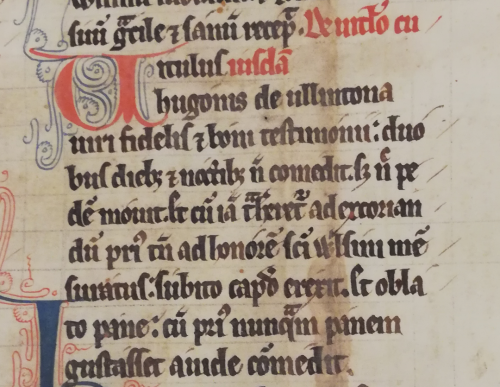 A calf in Ullington is healed after it is measured in dedication to Wulfsige: Harley MS 4242, f. 66r

After measuring, these cords were typically used as wicks for votive candles that were offered at a saint’s shrine, in this case Wulfsige’s tomb. An example is featured on the 800-year old ‘Miracles Windows’ of Canterbury Cathedral that are currently on display at the British Museum’s exhibition Thomas Becket: Murder and the Making of a Saint. They show a woman who had recovered from abdominal problems at the tomb of Thomas Becket (d. 1170), archbishop of Canterbury. She offers Becket a coiled wick, known as a ‘trindle’, which she had probably used to measure herself in his honour. 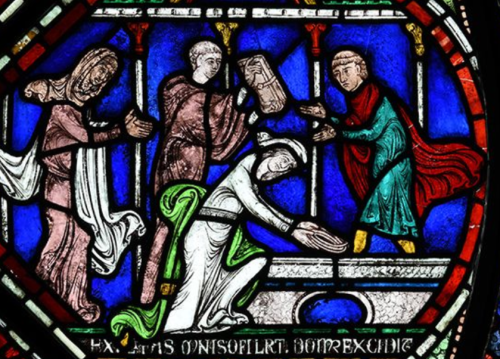 A woman offers a coiled wick to St Thomas of Canterbury on the Miracle Windows, 1200s: © The Chapter, Canterbury Cathedral & Trustees of the British Museum

Wulfsige was also associated with Becket by an owner of Harley MS 4242. The leaves with his miracles are later additions to the manuscript. Originally, it only contained a 13th-century copy of the Quadrilogus, an account of Becket’s life and martyrdom that was compiled by an Evesham monk in 1198–1199. Whoever added the fragments of Wulfsige’s miracles to the manuscript — an Evesham monk perhaps — may have linked the anchorite with the archbishop because of the many healing miracles that were performed at their tombs. 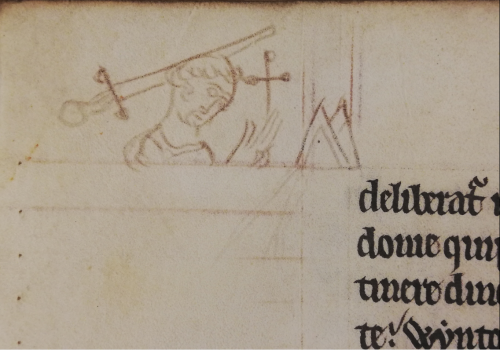 A marginal drawing of the murder of Thomas Becket: Harley MS 4242, f. 6v

While hundreds of Becket’s miracles survive, the leaves with Wulfsige’s miracles only contain seventeen complete stories. However, the fragments clearly originate from a larger collection, and their compiler suggests that there were many more miracles that they did not write about: ‘These are a few of the many things that Christ performed for his saint Wulfsige’ (‘Hec pauca de multis que pro sancto suo Wlsino est operatus Christus’).

The compiler refers to the multitude of Wulfsige’s miracles: Harley MS 4242, f. 66r

Do the leaves with Wulfsige’s miracles come from the original books compiled by Thomas of Northwich? Possibly. First, the script is datable to the early 13th century, which corresponds with the time when Northwich was active. Moreover, Wulfsige was venerated primarily at Evesham and his miracles may not been widely distributed.

Our fragments add to the small number of surviving books attributable to Evesham Abbey. The MLGB3 website lists twenty-seven surviving manuscripts and fragments from that abbey, which is only a fraction of the library at the monastery until it was dissolved in 1540. Whether or not the fragments originated from Northwich’s manuscript, they shed new light on the miracles that enhanced Evesham’s reputation as a site of sanctity and wonder during the Middle Ages.

Keep an eye on this Blog for more discoveries from the Harley collection.