A mariner's handbook from the library of Sir Walter Raleigh

Sir Walter Raleigh (b. 1552, d. 1618) was a pivotal figure in the history of Elizabethan England. A spy, a soldier and an infamous favourite of the Tudor queen, he is perhaps best known as an explorer who founded colonies in the New World and who supposedly brought back tobacco to England. But Raleigh was also a prolific poet and writer, who collected hundreds of books and manuscripts in his lifetime. We have now digitised one of his prized possessions, a rare finely illuminated mariner’s handbook, originally made in Portugal in the 16th century. 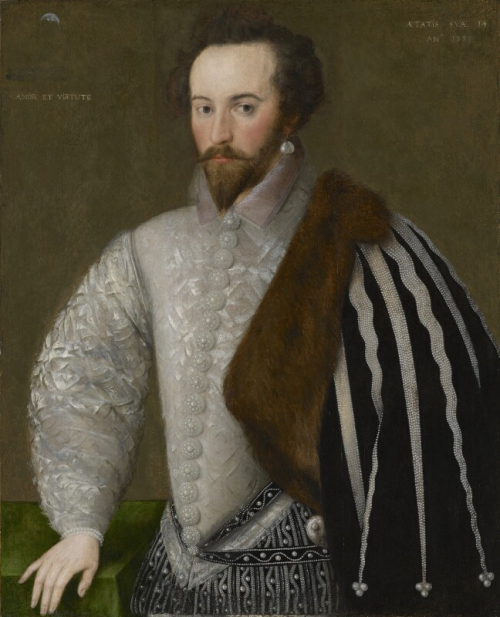 The manuscript (now Cotton MS Tiberius D IX) is known as the Roteiro do Mar Roxo, literally meaning ‘Rutter of the Red Sea’ in Portuguese. A rutter is a type of nautical handbook that gives guidance about various aspects of the art of sailing. Navigators from across Europe compiled their own versions of these handbooks throughout the 16th century.

The contents of surviving rutters vary considerably. Many are devoted to collections of maps, naval charts, and astronomical and mathematical tables that were used to plot a course or calculate the relative position of a ship at sea. Others contain information relating to the movement of the tides, instructions on how to use navigational instruments, and how to repair damaged ships, as well as logbooks and itineraries of notable journeys made to the far side of the world. Some even include suggestions on how to avoid dangerous coral reefs, and lists of cures for diseases caught by crewmembers during a voyage. In essence, these books had everything you might have needed to navigate the oceans successfully: an invaluable resource for any sailor or explorer. 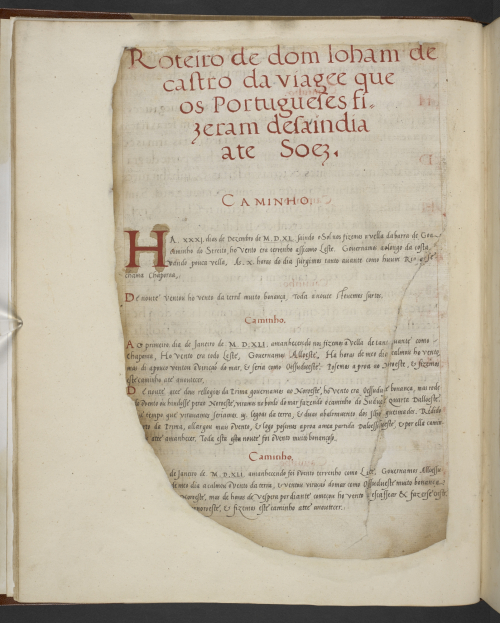 The Roteiro do Mar Roxo was made by the Portuguese nobleman João de Castro (b. 1500, d. 1548) during his 1541 expedition to Suez under Estêvão da Gama (b. c. 1505, d. 1576). By the 16th century, this region had long been established as the site of a major trade route between Europe and the Middle East, which the Portuguese and other European powers sought to control. De Castro’s work is principally devoted to an account of his voyage, supplemented with a wealth of nautical and geographical information, including observations of the islands and surrounding landscape he and his companions discovered, and notes and descriptions of coastlines, ports, and bays found along the Sinai Peninsula.

One of the highlights of de Castro’s account is a series of finely painted watercolour illustrations and charts (known as tabuas) that accompany the text, which are thought to have been originally drawn by the Portuguese nobleman while on-board his flagship. 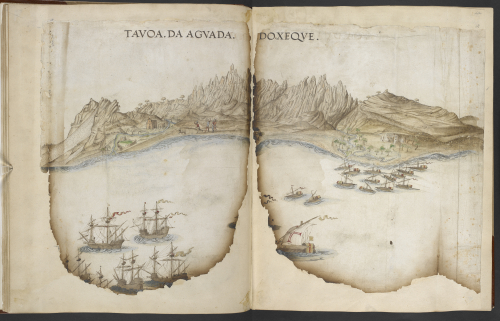 A view of an unidentified coast of Socotra Island, near the Arabian Sea, from the Roteiro do Mar Roxo: Cotton MS Tiberius D IX, ff. 11v-12r

Many of the illustrations are meticulously observed, recording not only the various topographic features of the islands and landscapes the fleet passed but also views of ports and cities on their journey. In the chart below, De Castro includes a depiction of the port of Suakin in Sudan, showing his fleet moored around it. 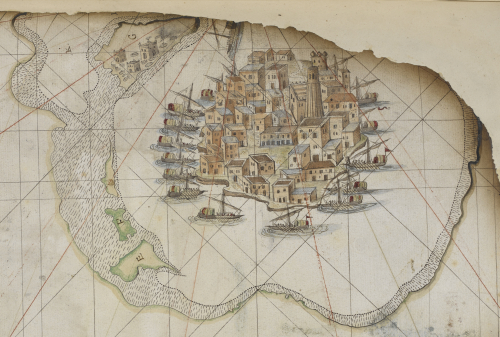 A depiction of the port of Suakin in Sudan, from the Roteiro do Mar Roxo: Cotton MS Tiberius D IX, f. 36v

The Portuguese expedition fleet was comprised of 12 large galleons and carracks and at least 60 galleys, many of which are featured in De Castro’s illustrations. The ships are painted in minute detail, providing us with an invaluable insight into early modern naval design, with De Castro accounting for everything, from their sails, oars, and rigging, to the banners and heraldry flying from their masts, while tiny figures of sailors are shown clambering over the decks. 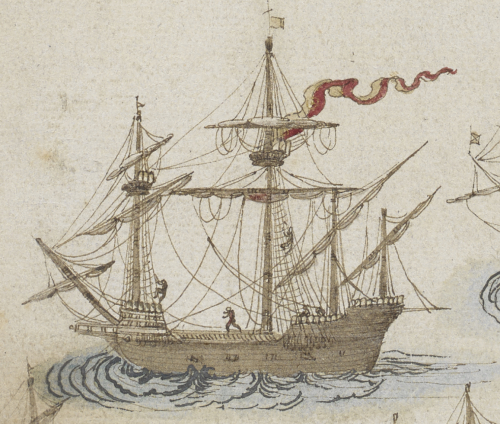 A galleon in the Portuguese fleet, depicted in the Roteiro do Mar Roxo: Cotton MS Tiberius D IX, f. 11v 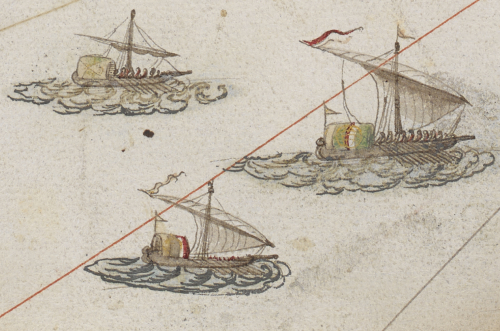 De Castro also included depictions of other ships and fleets the company encountered during their voyage, most notably those belonging to the Ottoman Empire, a major rival for Portuguese power in the Mediterranean. Here, the Portuguese fleet is shown encountering the Ottoman forces around the Strait of Suez, with a land battle ensuing soon after. 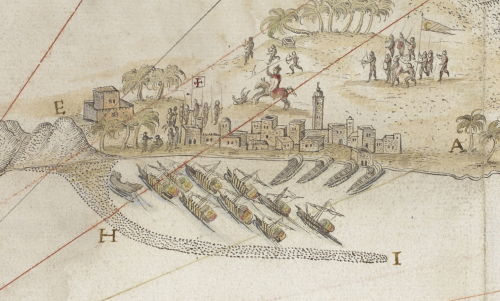 The Portugueuse company in battle with the army of the Ottoman Empire, from a view of part of the Strait of Suez: Cotton MS Tiberius D IX, f. 76r

The Cotton volume is one of only two manuscripts of the Roteiro to survive from the 16th century (the other is now housed at the James Ford Bell Library, at the University of Minnesota). Its layout, illustrations, and delicately written script all suggest that it served as the presentation copy of the work, gifted by de Castro to the Infante Luis (b. 1506, d. 1555), younger brother of the Portuguese king, to whom he also dedicated the text.

The story of the manuscript’s subsequent journey from Portugal to England remains a mystery, though some have speculated that it was seized from a Portuguese ship during a battle with English privateers towards the end of the 16th century. At the very least, we know that by the early 1600s it had come into the possession of Sir Walter Raleigh, who apparently bought it in London for £60, a small fortune at that time. 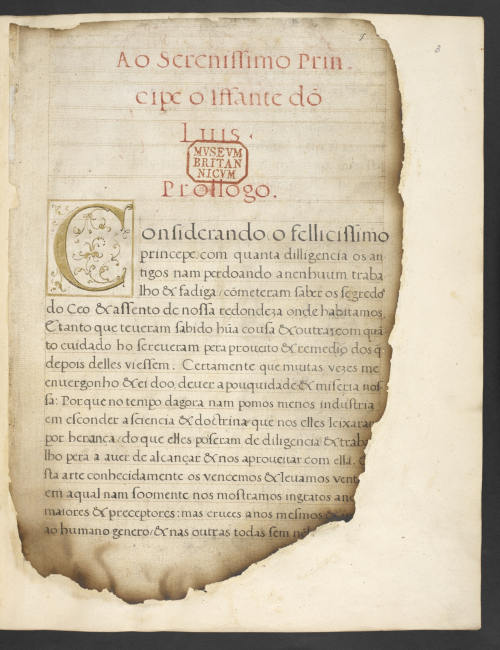 That Raleigh was willing to spend so much on the volume is unsurprising, as he was an avid collector of manuscripts, printed books, maps, and sea charts. His notebook (now Add MS 57555), written when he was put in the Tower of London by King James I in 1606, contains an alphabetised shelf-list and inventory of the hundreds of volumes that made up his library, many of which accompanied him during his imprisonment. It also includes a series of comprehensive notes and hand-drawn maps that he used to write his History of the World, in Five Books, first published in London in 1614. There is even an annotated sketch of the Red Sea itself, its inclusion perhaps inspired by the Portuguese Roteiro Raleigh had purchased for his collection. 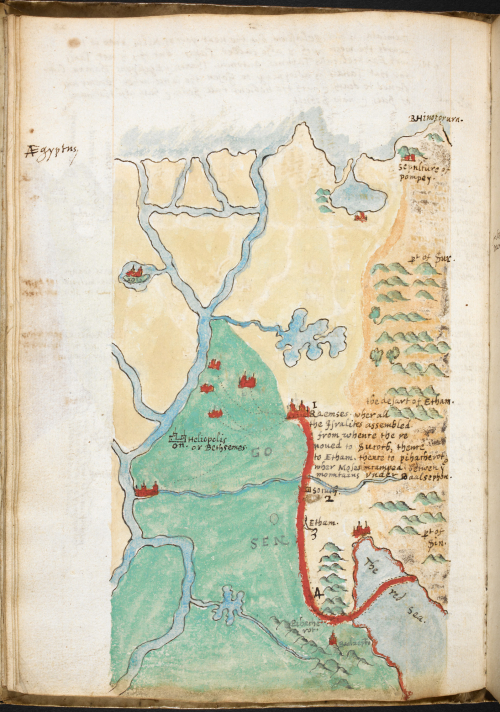 A page from the notebook of Sir Walter Raleigh, showing a map of the Red Sea and the surrounding Sinai Peninsula: Add MS 57555, f. 23v

Raleigh actually makes a reference to his copy of De Castro’s Roteiro in his History of the World, and this lends us an important clue as what happened to the volume in the years that followed. The explorer states that he had given the rutter to Richard Hackluyt (b. 1553, d. 1616), apparently with an instruction to adapt and publish an English paraphrase of the text. At the time, Hackluyt was an editor, translator, and travel writer, whose works were well-known for promoting the English colonisation of America.

However, Hackluyt did not complete Raleigh’s project and it seems that the Roteiro never returned to the library of its former owner. After Hackluyt's death in 1616 and Raleigh’s execution on the order of James I in 1618, Hackluyt’s son Edmond inherited the manuscript and he subsequently gave it into the keeping of the antiquary Sir Robert Cotton. Unfortunately, the Roteiro suffered the fate of many of the manuscripts in Cotton’s collection and was heavily burned in the Ashburnham House Fire in 1731, though thankfully much of the text and many of De Castro’s watercolour illustrations did survive intact. The volume can now be read in full on our Digitised Manuscripts site.