A letter from Heaven, fantastic voyages, mythical battles. All of these can be found in the recently digitised 16th-century Irish manuscript Harley MS 5280, which can now be viewed in full online. Is cúis áthais dúinn a fhógairt go bhfuil an lámhscríbhinn Ghaelach, Harley LS 5280, le fáil ar líne anois.

The volume in question was written in Ireland in the 16th century by Gilla Riabach son of Tuathal son of Tadhg cam Ó Cléirigh, and is an excellent example of medieval Irish scribal and literary culture. It is written mostly in a single column on parchment, and it contains over thirty different texts and a number of beautiful decorative initials. 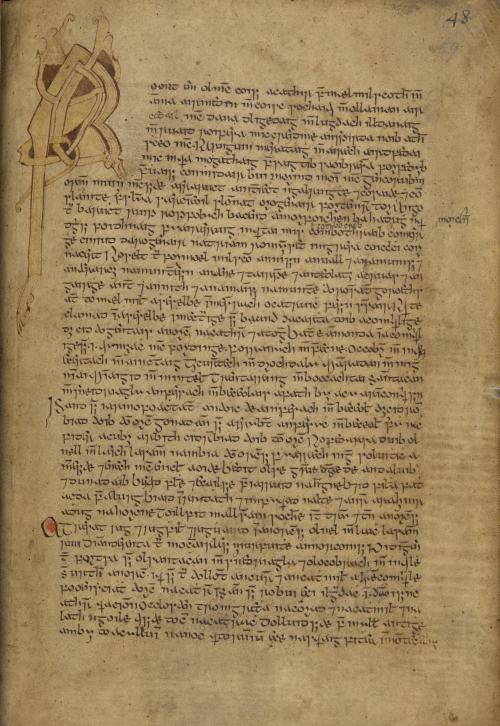 The manuscript is visually striking. Some of the shorter poems and notes have been wrapped into intricate shapes on the page and others form borders running along multiple margins. 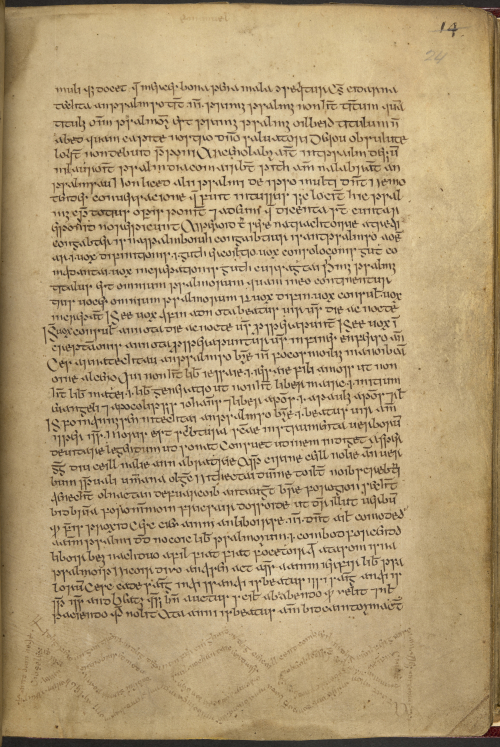 Four quatrains interwoven into a strange pattern: on disqualifying properties; on the location of the deaths of Aaron and Moses; on secrecy; on a wicked woman: Harley MS 5280, f. 24r

Ownership inscriptions reveal that this manuscript passed through the hands of Hugo Casserly and Henry Spelman in the 17th century. It was then acquired by Robert Harley and his son Edward Harley, Earls of Oxford, in the late 17th or 18th century. The Harley manuscripts were sold to the British government by Edward’s widow, Henrietta Cavendish Harley, and his daughter, Margaret Cavendish Bentinck, in 1753, under the Act of Parliament that established the British Museum, and they form one of the foundation collections of the British Library. You can read more about the Harley collection here. The ownership inscription of Henry Spelman (d. 1641) above a zoomorphic initial at the opening of The Voyage of Mael Dúin’s Currach: Harley MS 5280, f. 12r

The texts contained in this manuscript are equally exciting and diverse. Stories of apples miraculously growing on alder trees, of Constantine’s conversion to Christianity, and a commentary on the Psalter are found alongside accounts of mythical figures from Ireland’s past. The manuscript includes two Immrama or voyage tales: The Voyage of Máel Dúin’s Currach (Immram curaig Mail Dúine) and The Voyage of Bran (Immram Brain). Máel Dúin sets off to avenge his father’s murder and ends up travelling to a number of wondrous islands, encountering giant ants, golden apples and a killer cat. Bran’s travels take him to the eerie Island of Joy and a paradisiacal island inhabited by otherworldly women.

Many of the texts discuss incredible events to happen on the island of Ireland. The only extant Middle Irish version of the Second Battle of Magh Tuireadh (Cath Maige Tuired) is preserved in the manuscript. It is an account of the conflict between the Túatha Dé Danann and the Fomorians culminating in Lug Lámfhada killing Balor, his grandfather. The story contains more than the battle between the Túatha Dé Danann and the Fomorians. One example is the account of Dían Cécht giving Núadu a fully functioning hand of silver. When his son, Míach, outperforms him by turning the silver hand to flesh, Dían Cécht kills him out of jealousy. It also tells of the Dagda putting gold coins in the satirist Cridenbél’s food as part of a cunning plan to kill him without facing punishment. 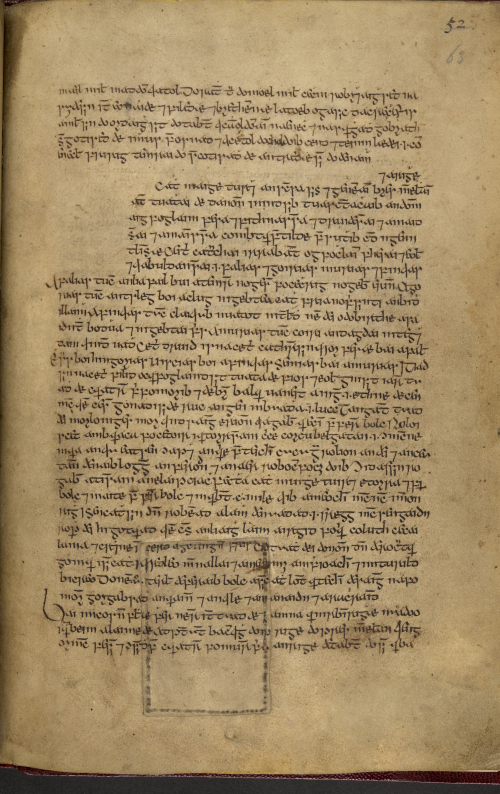 This exciting manuscript also contains stories of love, like Créde’s lament for Dinertach (the unique copy), a legal text known as Cáin Domnaig, and The Story of Mac Da Thó’s Pig (Scéla Muice meic Da Thó), in which deciding how to carve a pig leads to chaos. A medieval Irish tale list is included in The Stratagem of Urard mac Coise (Airec menman Uraird maic Coisse). A full list of the manuscript's contents can be found in the updated online catalogue record.

Harley MS 5280 is an invaluable source for early Irish literature and we are delighted that it is now available to view online. Táimid thar a bheith sásta go mbeidh daoine ar fud na cruinne in ann breathnú ar an lámhscríbhinn iontach seo. Tá súil againn go mbainfidh sibh tairbhe agus taitneamh aisti ('We are delighted that people all over the world will be able to look at this wonderful manuscript. We hope that you find benefit and pleasure in it').