On 22 August 1485, the last English king to be killed in combat died at the Battle of Bosworth Field. He was none other than Richard III, a monarch whose reputation is still debated, known variously as the King under the Carpark, Shakespeare's hunchback ruler, and the (alleged) murderer of his young nephews, Edward V and Richard, Duke of York. In this blogpost, we set out some of the manuscript evidence for the reign of this controversial sovereign.

One of the earliest notices of the Battle of Bosworth is found in the calendar of an early 15th-century Book of Hours known as the 'Beaufort/Beauchamp Hours'. This calendar contains a number of added notices of births, deaths and other notable occurrences, extending as far as the deaths of Queen Jane Seymour in 1536 and Elizabeth Lucar in 1537. In the margin of the calendar page for August, the same scribe has made retrospective notes of two significant events:

7 August: 'This day landed King Harry the viith at Milfoord Haven, the yere of our Lord m.cccc.lxxxv.' 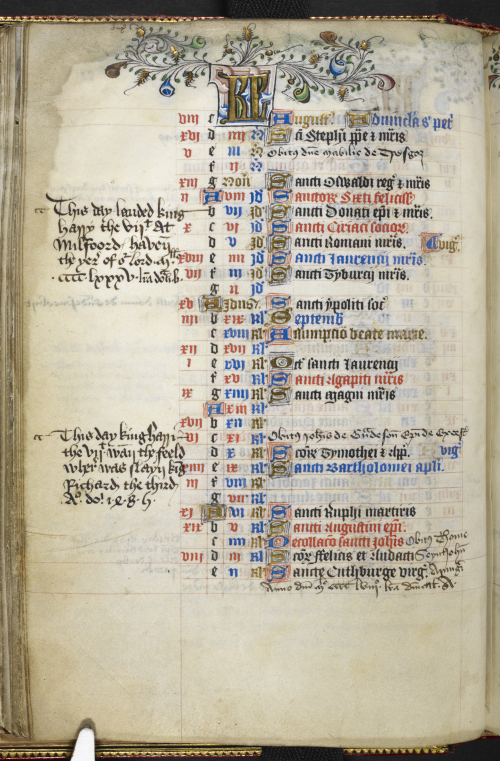 The calendar page for August in the 'Beaufort/Beauchamp Hours', with added notices of the landing of Henry Tudor at Milford Haven and the death of Richard III at Bosworth: Royal MS 2 A XVIII, f. 31v

We can tell immediately that these notes were made after the Battle of Bosworth Field, since Henry Tudor is described prematurely at his landing as 'King Harry the 7th'. Richard is styled 'king' in the notice of his death, which does at least acknowledge the legitimacy of his rule. The lack of space in the margins of this calendar doubtless prevented the annotator from recording a more detailed description of Richard's personality and achievements.

Another posthumous report of Richard III's reign is found in an early 16th-century chronicle that extended originally as far as the rule of Henry VII. This chronicle supplies a dispassionate account of Richard's life, set out as part of a genealogical tree of the English rulers:

'Richard that was sonne to Richard Dewke of Yorke and brother unto Kyng Edward the iiiith was Kyng after hys brother and raynyd .ii. yeres and lyth buryd at Lecitor.' 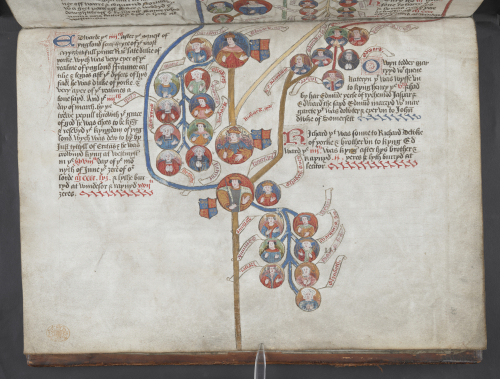 A genealogical chronicle of the rulers of England, including an account of the reign of Richard III: King's MS 395, f. 33r

Richard is also illustrated in a roundel that accompanies the text, wearing a crown and carrying a sceptre in his right hand. This cannot be considered a realistic likeness, since all the portraits in this manuscript are similar in style and have the same palette of colours. But it is an antidote to the conventional image of King Richard, represented in the more famous painting held at the National Portrait Gallery. What is also noteworthy in the same manuscript is that no mention is made of the succession and brief reign of Edward V, Richard's nephew, or of the mysterious disappearance of the young princes. 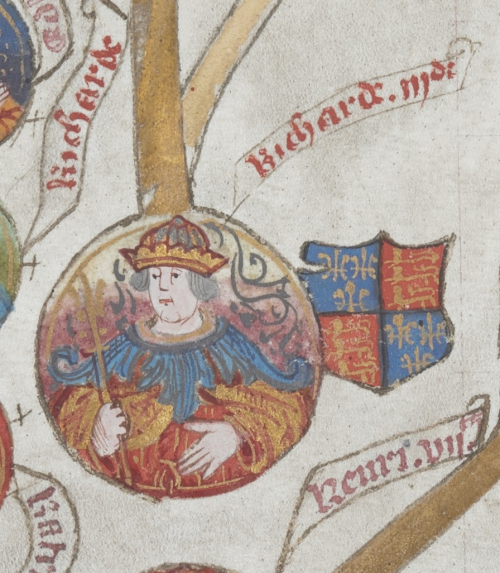 The portrait of Richard III in the genealogical chronicle: King's MS 395, f. 33r

So what can we glean about Richard III from other manuscript sources? Like his predecessors, Richard was renowned as a law-giver. In one English statute book made in 1488 or 1489, just a few years after his death, Richard is shown in an historiated initial crowned and robed, holding a sceptre and orb, and surrounded by leading clerics and other courtiers. There is nothing to suggest here that his rule was considered illegitimate in any way. Indeed, at the time that this manuscript was produced, Henry VII's position on the throne was still precarious, since he was being challenged first by Lambert Simnel and then, in the 1490s, by Perkin Warbeck. Henry is illustrated in the same volume in exactly the same way as Richard III (f. 339v). You could not tell from this book alone that one of these kings had overthrown the other in battle. 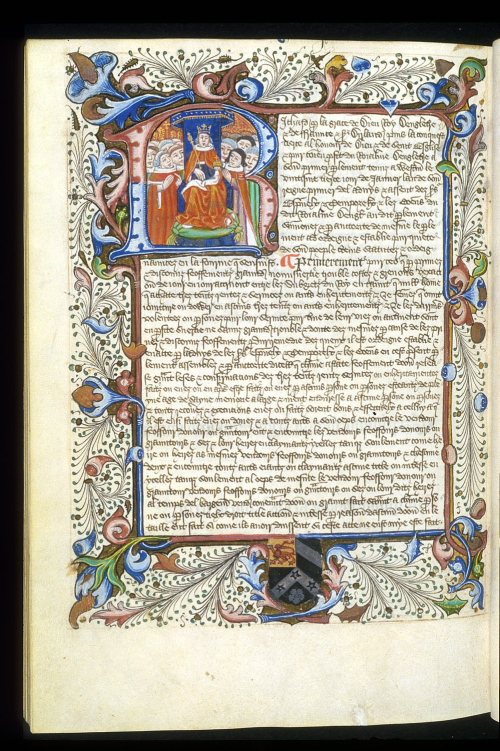 The statutes issued by King Richard III in a legal manuscript made in London: Hargrave MS 274, f. 328v 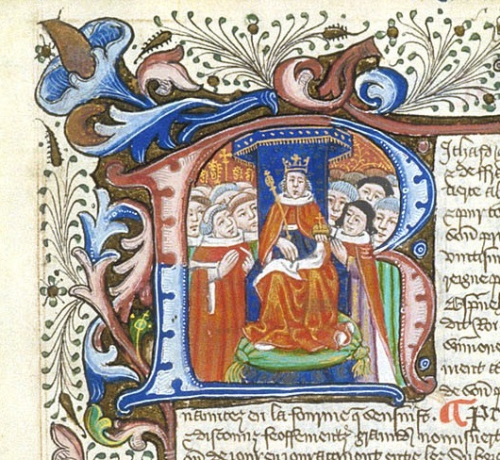 Detail of the portrait of Richard III in this legal manuscript: Hargrave MS 274, f. 328v

Another visual statement of the legitimacy of Richard III's rule, this time dating from his own reign, is found in a manuscript of the English translation of De re militari by Vegetius. The decorated initial that opens this volume contains the royal coat of arms supported by two boars (Richard's emblem) and surmounted by a crown. At the foot of the same page is the griffin of Salisbury, perhaps to denote that the book was made for Edward of Middleham, prince of Wales and earl of Salisbury, Richard's son and heir apparent until his untimely death in 1484. On another page of the same manuscript is the coat of arms of Anne Neville, Richard's wife and queen of England (f. 49r). 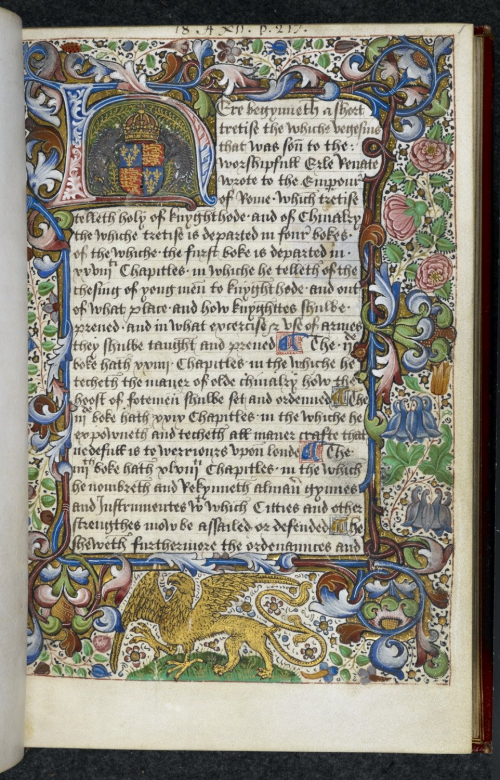 The royal arms of King Richard III in a manuscript of De re militari: Royal MS 18 A XII, f. 1r

A final and contemporary indication of Richard's own personality is provided by books that belonged to him, including before he became king. One manuscript of the Romance of Tristan bears the inscription 'Iste liber constat Ricardo Duci Gloucestre'. After his death it passed into the hands of his niece, Elizabeth of York, who was married to Henry VII in order to unite the two dynasties. Her inscription, 'sans remevyr Elyzabeth', is found at the bottom of the page. This evidence reminds us that Richard was styled 'duke of Gloucester': in the wake of the discovery of his skeleton, York and Leicester waged claims to being the appropriate home for his reburial, while Gloucester was largely overlooked. It also suggests that he may have had an interest in courtly literature, some indication of the circles in which he moved and what was required of a Renaissance prince. This would also have extended to having knowledge of ancient and more recent history. Among the other manuscripts known to have been owned by Richard is a copy of the Chroniques de France, from 1270 to 1380, which is inscribed part-way down one page 'Richard Gloucestre'. 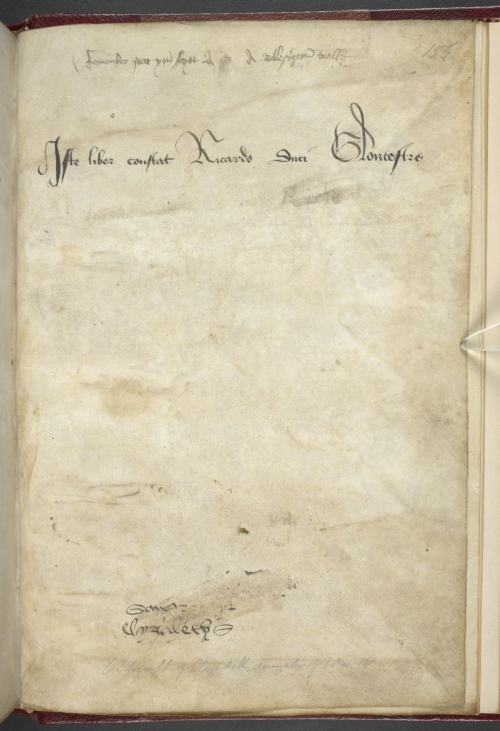 'This book belongs to Richard, duke of Gloucester', in a manuscript of Roman de Tristan: Harley MS 49, f. 155r 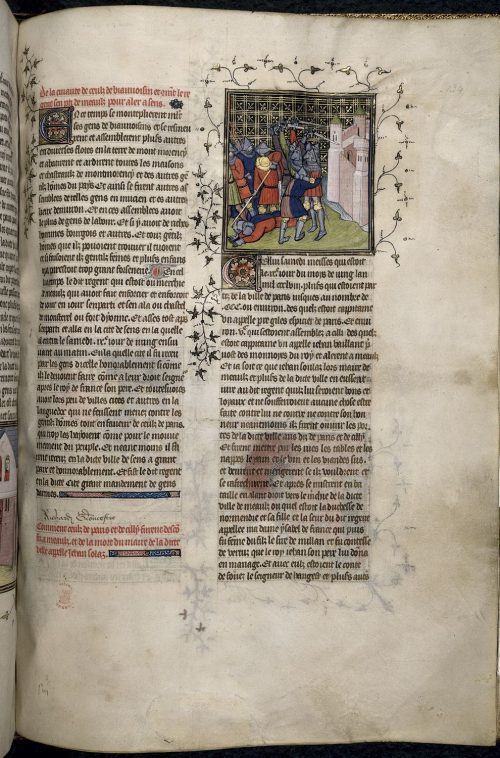 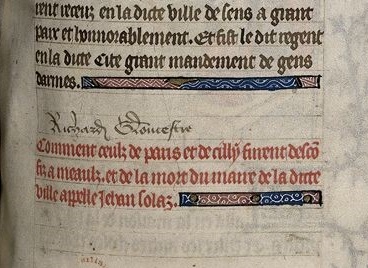 Of course, there are other aspects of Richard's rule that we have not considered here. One of these is the sinister removal from power of his nephew, King Edward V, and the subsequent (assumed) deaths of the two princes in the Tower. To be accused of regicide and infanticide, even in an era when rulers were prepared to do anything to secure their position, is a massive stain on Richard III's reputation. The fate of Edward and his younger brother must always be set against attempts to rehabilitate Richard, and cannot be easily argued away. Equally, we are lacking a full understanding of Bosworth Field itself, and of how Richard's fortunes swayed on the battlefield. It is sometimes difficult to dislodge Shakespeare's account of the battle, and of Richard himself, from the popular memory. But the surviving manuscripts from his lifetime do at least provide us with a much more rounded vision of this most disputed of English monarchs.