Long celebrated for its superb illuminations, the Saluces Hours (Add MS 27697) has been described by the art historian John Plummer as ‘one of the finest and most inventive manuscripts illuminated during the 15th century’. Yet it was only in 1989 that the art historian François Avril identified most of its miniatures as the work of Antoine de Lonhy, a prolific, multifaceted and well-travelled artist of the 15th century.

Antoine de Lonhy is the subject of a new exhibition, Il Rinascimento Europeo di Antoine De Lonhy (The European Renaissance of Antoine De Lonhy), which opened at the Palazzo Madama—Museo Civico d’Arte Antica in Turin on 7 October 2021, and will run until 9 January 2022. The Saluces Hours is a focal point of the exhibition, appearing in the first room together with a painting of Lonhy in the collection of the Palazzo Madama. Other works by Lonhy and his contemporaries include manuscripts, panel paintings, stained glass, sculptures and textiles. Visitors to the exhibition will also be able to view other miniatures from the manuscript shown digitally beside it. 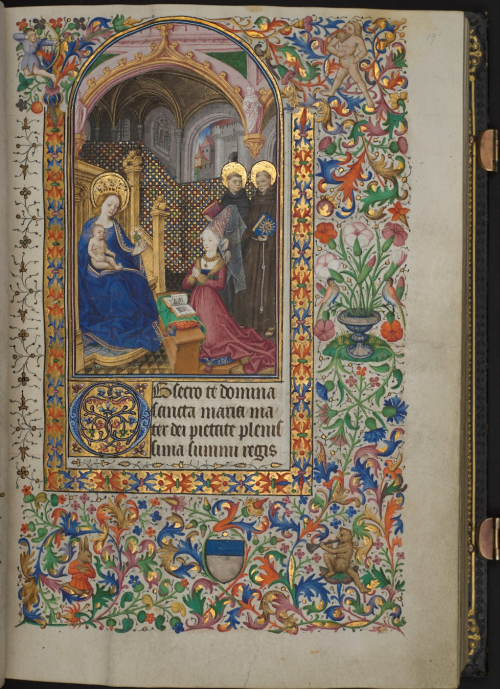 The Virgin and Child with an owner portrait of a woman, presented by two Franciscan saints, perhaps St Bernardino and St Anthony of Padua, by Antoine de Lonhy: Add MS 27697, f. 19r

The Saluces Hours is a manuscript with a complicated genesis. It was produced in Savoy, which in the 15th century was in independent duchy, and today comprises an area of southeast France and northwest Italy. The manuscript was originally begun around the 1440s, several decades before Lonhy’s involvement in the project. In this first stage, the text was probably completed and the process of illuminating the book begun. Some of the pictures and borders from this phase are attributed to Peronet Lamy (d. before 1453), an artist who worked for the court of Savoy from around 1432 to 1443, whose work is particularly apparent in the miniature of St John the Evangelist (f. 13r). 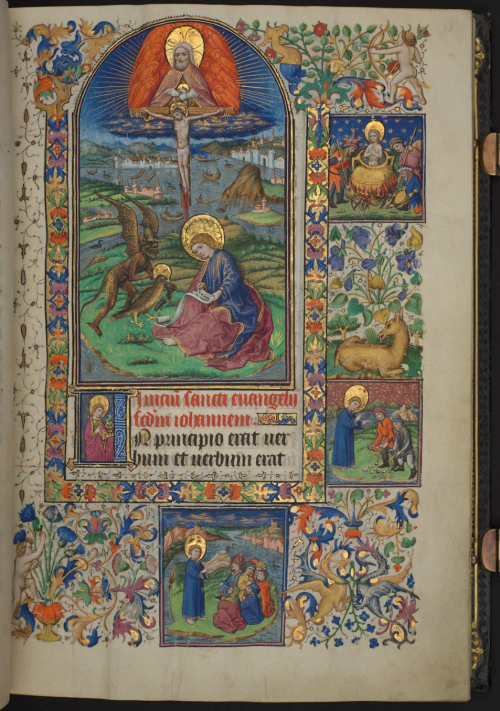 Another contemporary artist, known as the Master of the Hours of Louis of Savoy (after Paris, BnF, MS Lat. 9473) also contributed eight miniatures, as well as the historiated initials which accompany them. He might have done this concurrently with the original campaign of work, or perhaps he took over when Peronet Lamy stopped working on the book. 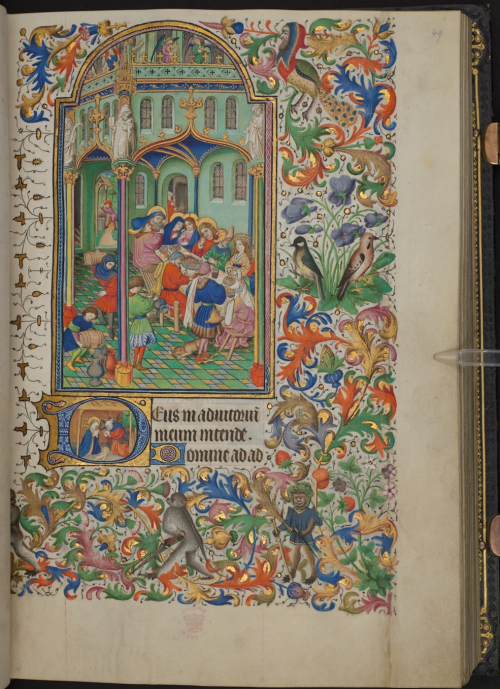 The Wedding at Cana, by the Master of the Hours of Louis of Savoy, retouched by Antoine de Lonhy: Add MS 27697, f. 49r

But for some reason, the project stalled and for over a decade the beautiful book was left unfinished. Then in around 1460-1470, Antoine de Lonhy took it up and completed it. As well as adding lots of new pictures, he also retouched the earlier artworks to increase the impression of stylistic coherence, and in some cases he may have painted on underdrawings made by the previous artists.

Although the book was originally intended for a male owner, as suggested by the inclusion of prayers which are grammatically phrased for the use of a man, Lonhy seems to have completed the new work for a woman. He painted her in an owner portrait, kneeling before the Virgin and Child and followed by two Franciscan saints, perhaps St Bernardino and St Anthony of Padua. She is gorgeously dressed in a fur-trimmed dress, a weighty gold collar, and a towering conical hat (know as a hennin). 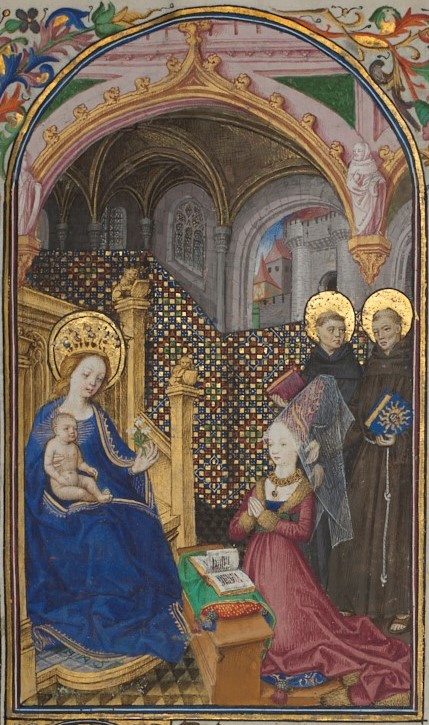 The Virgin and Child with an owner portrait of a woman, presented by two Franciscan saints, by Antoine de Lonhy: Add MS 27697, f. 19r (detail)

Yet the identity of this glamorous owner has proved puzzling. The borders of the manuscript regularly feature the coat of arms of the Saluces family of Piedmont (argent a chief azure), as well as in two places the coat of arms of the d'Urfé family (vair a chief gules). Based on this heraldic evidence, it used to be thought that the owner was Aimée (or Amadée) de Saluces (b. 1420, d. 1473), daughter of Mainfroy de Saluces of Piedmont. Aimée married Guillaume-Armand de Polignac around 1441, and their daughter Catherine married Pierre d'Urfé in 1489.

However, scholars no longer agree with this identification because the manuscript does not contain the Polignac arms, despite dating stylistically from the period after Aimée’s marriage. Further, the coats of arms appear to be later additions to the manuscript, and probably do not refer to the woman who Lonhy worked for at all. It is more likely that both the original and later patrons of the Book of Hours, with its close similarities to the Hours of Louis of Savoy, were members of Savoy's Ducal family. It is now thought that the woman is possibly Yolande of France (b. 1434, d. 1478), wife of Duke Amadeus IX of Savoy. 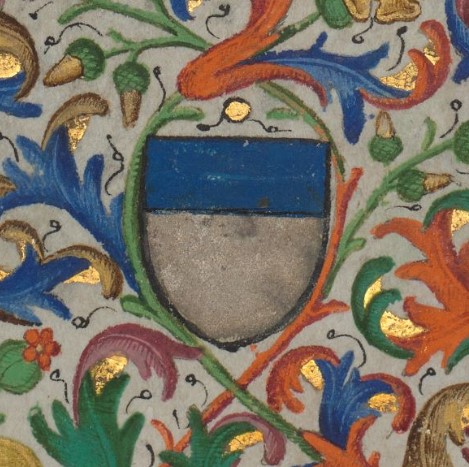 We know more about the artist, Antoine de Lonhy, thanks to the work of art historians who have meticulously identified his works and reconstructed his career, now further elucidated in the exhibition and exhibition catalogue. Apparently French by birth, he seems to have started his career in the Duchy of Burgundy in the 1440s. By the 1450s he was documented working in Toulouse, and in 1460-62 he was working in Barcelona. He seems to have settled in Piedmont around 1462, and he worked on commissions in Savoy and Piedmont in around 1470-90. Dozens of his attributed artworks survive in a surprisingly wide variety of media, including panel paintings, illuminated manuscripts and stained glass.

Despite his wide-ranging travels, Antoine de Lonhy’s style is closely linked to the northern European Gothic art in which he was trained. The ornamental architecture in his pictures is always Gothic rather than Classical, although Classical architecture was flourishing in Italy at the time. His pictures show a depth of space and an interest in sweeping landscapes that suggests he was well versed in the work of great Flemish artists of the first half of the 15th century such as Jan Van Eyck and Roger Van der Weyden. His figures are softly modelled with sensitive faces, draperies that fall into elaborate deep folds, and sometimes strikingly lifelike anatomy, as illustrated in the picture of the naked Adam and Eve in the Saluces Hours. 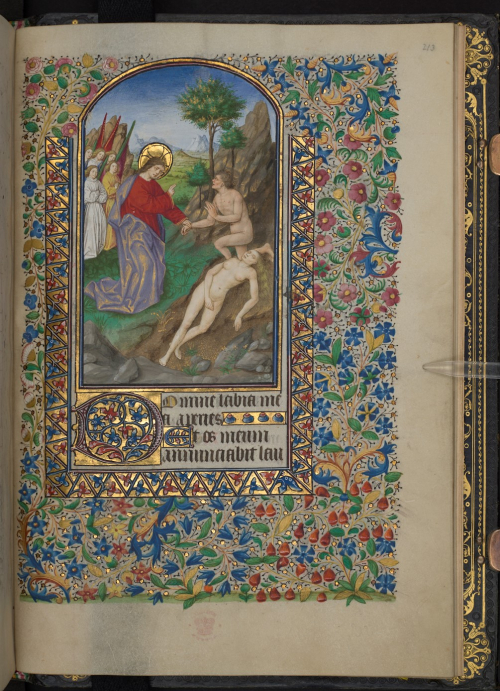 To discover more about Antoine de Lonhy and see a great range of his works, visit the exhibition Il Rinascimento Europeo di Antoine De Lonhy at the Palazzo Madama—Museo Civico d’Arte Antica in Turin, from 7 October, 2021 to 9 January, 2022.

You can read more about the subject in exhibition catalogue, Il Rinascimento europeo di Antoine De Lonhy, ed. by Simone Baiocco e Vittorio Natale (Genova: SAGEP, 2021), and you can find further bibliography in our catalogue record. You can also view the Saluces Hours online on our Digitised Manuscripts website.