Masks, murder and medieval Irish literature — these were the three passions of Michael Myers, primary antagonist of the Halloween movies. In John Carpenter's 1981 horror classic, Halloween 2, Myers took a short break from his Halloween massacre to break into a school and write ‘SAMHAIN’ in blood on a blackboard. His psychiatrist, Dr Sam Loomis, explained that this was a Celtic word meaning ‘Lord of the dead. The end of summer. The festival of Samhain, October 31st’. This is not entirely accurate: the Dictionary of the Irish Language instead defines samain as 1 November or All Saints’ Day.

The police officers and Dr Loomis looking at the word ‘Samhain’ written in blood on a blackboard, from the film Halloween 2

Given this connection, we thought it would be fitting to celebrate Halloween with some spooky Irish stories from British Library manuscripts. Although there were no masked murderers prowling the suburbs in medieval Ireland, these tales of the supernatural should satisfy fans of horror and medieval literature alike. 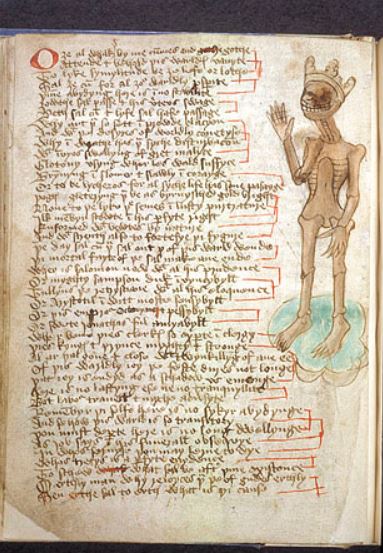 Our first Irish ghost story, Echtra Nerai ('The Adventures of Nera'), is set on the eve of Samhain, 31 October. King Ailill and Queen Medb (Maeve) were at Ráth Cruachan with their household, playing an appropriately ghastly game — whoever could tie a withy round the foot of either of the two men hanged outside would win a prize. True to all good horror stories, it was a dark night of great horror on which demons always appeared. This was enough to scare all the men, who ran back inside the house in fright. 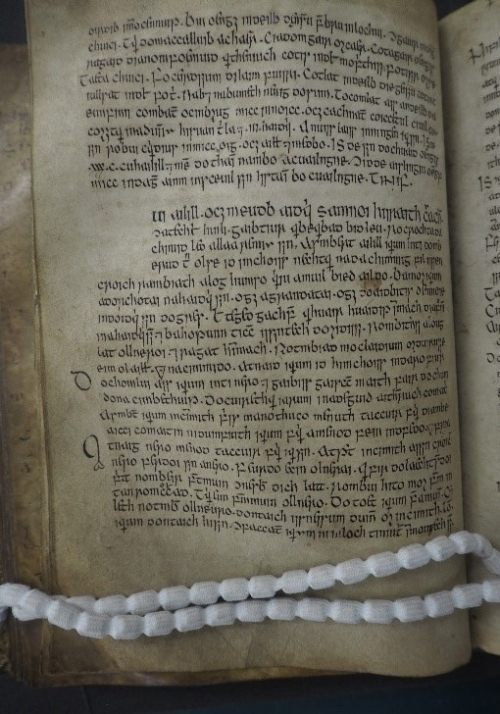 The opening lines of The Adventure of Nera, with space for the opening initial left unfilled (Ireland, 16th century): Egerton MS 1782, f. 71v

Nera braved the night, but the withy fell from his grasp three times. Fortunately, the corpse was surprisingly helpful despite his recent execution, and advised Nera to put a peg on the withy to keep it in place. The corpse then complimented Nera on his courage and asked for a drink, as he had been very thirsty when he was hanged. Nera agreed and gave the dead man a piggy-back ride to a nearby house surrounded by a lake of fire. The corpse complained that this house was no good, and neither was the next house surrounded by a lake of water. The third house, much like the story of Goldilocks, was just right. Unfortunately for its occupants, the corpse spat out the lost drops of his drink on them, killing them all.

Unperturbed, Nera brought the corpse back to the gallows, but on his return he saw Ráth Cruachan burning and the decapitated heads of its residents on the ground. Nera followed the otherworldly army responsible for this carnage into a síd, or fairy hill, which led him to the Otherworld. There he was ordered by the king to live with a single woman and to bring him firewood every day. This woman revealed in turn that the destruction Nera had seen was only a vision, and that he must warn his people to be on guard the next Samhain. 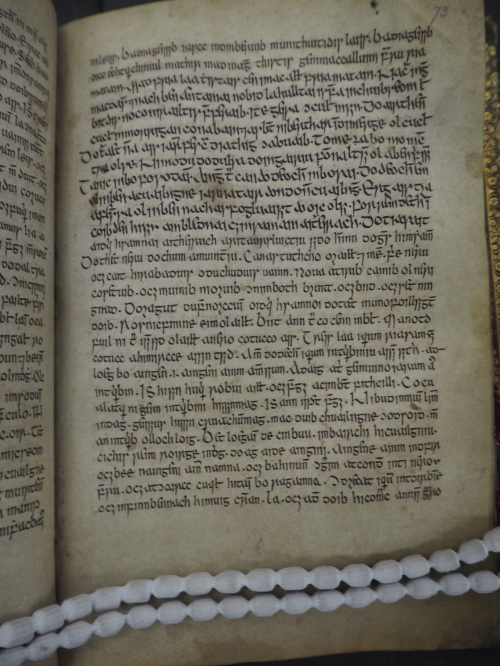 The Adventure of Nera, when Nera's wife warns him that the Otherworld host will attack next Samhain when the ‘fairy-mounds’ of Ireland are open: Egerton MS 1782, f. 73r

Nera learned that no time had passed in Ráth Cruachan, despite spending three days in the Otherworld. His warnings were heeded and on Samhain the following year he was sent back to rescue his new family from the síd. After discovering he had a son, he returned to the mortal realm telling of the wonders of the Otherworld and the coming attack next Samhain. The following year the men of Ailill and Medb raided the síd, destroying it and taking three treasures: the crown of Briúin, the mantle of Lóegaire in Armagh, and the shirt of Dunlaing in Kildare. Nera, in contrast, returned to the síd where he would remain with his wife until Doomsday.

Other medieval Irish ghosts tended to be friendly, albeit a bit of a nuisance. Often they were simply looking for somebody to pray for them to get into Heaven. This was the case in our second ghost story, recounted in Egerton MS 92, which describes how a recently-deceased nun had appeared to Maol Póil úa Cináetha. After staying up late to discuss astrology with a fellow monk, Maol Póil had tried to sleep, but he was interrupted by a nun who had died 6 days earlier, who appeared and chastised him for discussing astrology instead of praying for her. When Maol Póil asked which prayer she would like, she requested the Bíait, possibly Psalm 118 or Psalm 32, one of the Seven Penitential Psalms. Her final destination is not revealed, but the efficacy of prayer for helping ghosts is attested elsewhere.

The same manuscript tells of Coirpre Crom (Coirpre the Stooping), bishop of Clonmacnoise. One night after vespers, a dark, shadowy figure appeared to him, with a bright circle around its neck and wearing a shirt with one sleeve. The figure revealed itself to be the soul of Máel Sechnaill mac Máele Ruanaid, a 9th-century Irish king. He claimed that his darkened appearance was the result of his sins staining his soul. The circle round his neck came from a ring he had given to a priest who failed to pray for him, and the one-sleeved shirt was the one he had given to pupils of the church who came to him, while he was alive, looking for a cloak for a poor student. The ghost revealed that he was in Hell and was being carried through the air, tormented by demons who were frightened away by the sound of Coirpre’s prayers. Coirpre agreed to pray for Máel Sechnaill and enlisted the twelve priests of the church to pray for his priest, who was also in Hell. A year later, Máel Sechnaill’s soul reappeared, visibly less stained by sin. Máel Sechnaill told Coirpre again of the horrors of Hell and asked him to continue praying and fasting. The next year he returned, radiant in appearance, and announced that Coirpre’s prayers had saved him from Hell and both he and his priest would ascend to Heaven.

Hundreds of years before M.R. James, H.P. Lovecraft and John Carpenter, the Irish were telling stories of restless spirits, murderous corpses and otherworldly invaders. As Nera’s wife said, ‘the fairy-mounds of Ireland are always open on Samhain’.