The Floreffe Bible on exhibition

This year is the 900th anniversary of the founding of the Premonstratensian abbey of Floreffe, on the river Sambre near Namur, in 1121. The anniversary is being celebrated in Namur at TreM.a: the Museum of Ancient Arts, with the exhibition Grandeur et déchéance. L’héritage patrimonial de l’abbaye de Floreffe which opened in late October.

The exhibition features the second volume of the enormous (480 x 335 mm) two-volume Bible made in Floreffe in around 1170, now in the British Library’s collection. The manuscript is open at the beginning of the Gospel of St Luke, which features a large illuminated miniature above the first word of the text ‘Quoniam’ [quidem multi conati sunt ordinare narrationem] (Forasmuch as many have taken in hand to set forth in order a narration). 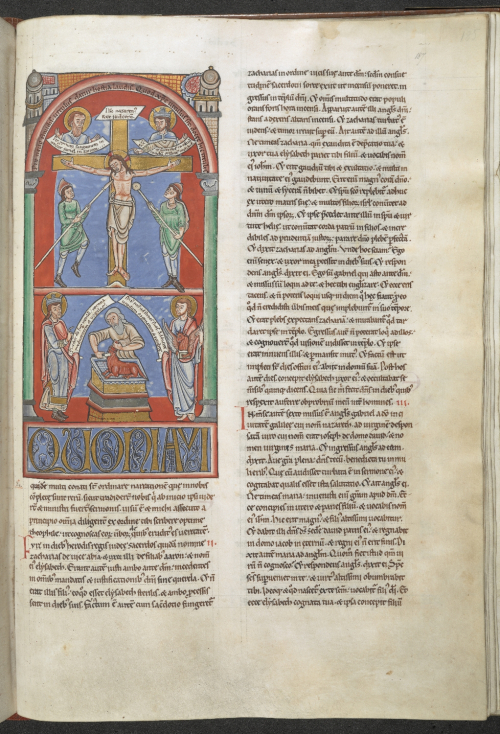 Like the other miniatures in the Bible, this one provides a sophisticated visual commentary on the accompanying text. In part, the image relates to the Evangelist’s symbol of St Luke. From an early date, Church Fathers associated symbols with the Four Evangelists, derived from Ezekiel’s vision of the four living creatures with four faces (Ezekiel 1:5-11), and from St John’s vision of the four living creatures before the throne (Revelation 4:6-8). St Luke’s symbol is an ox or calf, while the others are a man for St Matthew, a lion for St Mark and an eagle for St John.

In the lower register of the miniature, a priest is sacrificing a calf on an altar. On either side are figures holding scrolls bearings texts from the Old or New Testament. To the left, King David, the supposed author of the Psalms, holds a scroll with Psalm 68:32: ‘[et] placebit Deo super vitulum novellum, cornua producentem et ungulas’ ([And] it shall please God better than a young calf, that bringeth forth horns and hoofs). To the right, St Luke, holding his symbol, which resembles the calf being sacrificed, holds a scroll with verses from Luke 15:22-23: ‘Dixit autem pater ad servos suos: . . . et adducite vitulum saginatum, et occidite’ (And the father said to his servants: . . .And bring hither the fatted calf, and kill it). 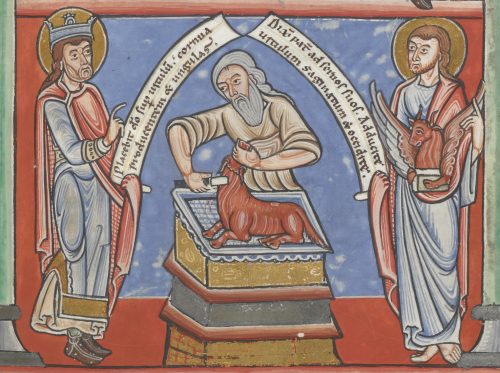 The priest sacrificing a calf, with King David and St Luke on either side, from the beginning of the Gospel of St Luke, the Floreffe Bible: Add MS 17738, f. 187r (detail)

The upper scene of the miniature is the Crucifixion of Christ, with the soldier Longinus on the left, piercing Christ's side with his spear, and the soldier Stephaton on the right, holding a sponge filled with vinegar. Just above the transverse beam of the cross, the Old and New Testament quotations and supposed authors are reversed in order. On the left, St Paul holds a scroll with a verse from Hebrews 9:12: ‘[neque per sanguinem hircorum aut vitulorum, sed] per proprium sanguinem introivit semel in Sancta’ ([Neither by the blood of goats, or of calves, but] by his own blood, entered once into the holies). On the right, a crowned King David points directly at Christ; his scroll contains a verse from Psalm 109:4: ‘Tu es sacerdos in aeternum secundum ordinem Melchisedech’ (Thou art a priest for ever according to the order of Melchisedech). 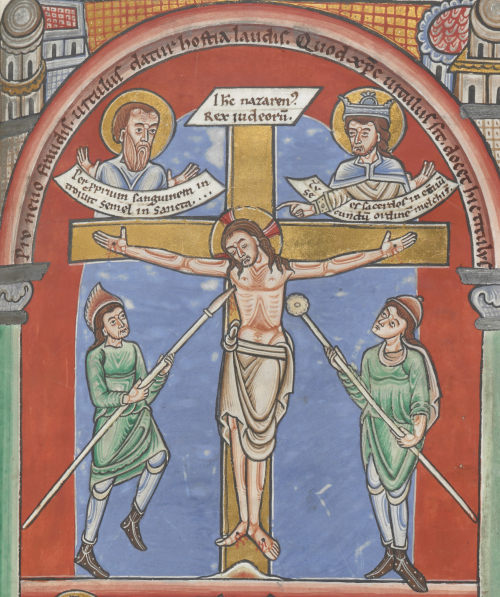 The Crucifixion of Christ, with St Paul and King David, from the beginning of the Gospel of St Luke, the Floreffe Bible: Add MS 17738, f. 187r (detail)

Rhymed verses inscribed on the arch above summarise the significance of the images:

For the blemish of the fraud [i. e., of the devil] a calf is given as the sacrifice of praise [c.f. Hebrews 13:15]
That this calf is Christ is what this inscription shows.

Each of the Gospels in the Floreffe Bible opens with a similar image with layered interpretations and visual commentaries. For example, you can read about the opening of the Gospel of St Mark, which explores the relationship between the lion and Christ’s Resurrection, in our previous blogpost. 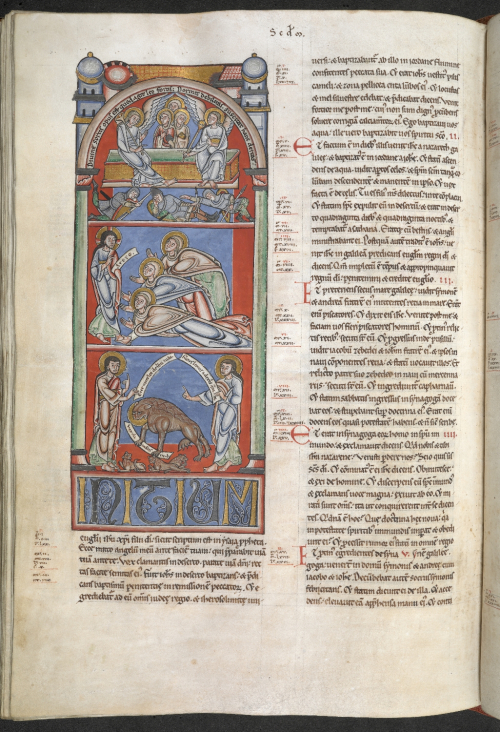 Another of the images in the manuscript, at the beginning of the Book of Job, connects the family of Job to the three theological virtues and the Seven Gifts of the Spirit. You can also read about this page in a previous blogpost.

The first volume of the Floreffe Bible is also on public display, in the Sir John Ritblat Treasures Gallery at the British Library in London, where it is open to St Jerome’s letter to Paulinus, bishop of Nola, in which he urges Paulinus to make a diligent study of the Scriptures. Both volumes are also available online on our Digitised Manuscript website.