Merlin is the central mythical character in the world of King Arthur and the knights of the Round Table. A shadowy and untameable figure who seldom takes a single form for long enough to show us his true nature, he eludes definition today, just as he did a millennium ago, and his origins and fate remain mysterious. His character was probably an amalgam of Myrddin Wyllt, a bard and wild man of the Caledonian forest in Welsh tradition, Ambrosius Aurelianus, a warrior-prophet who was among the last of the Romans in Britain, and possibly a local pagan god whose cult was associated with the Welsh town of Carmarthon (from Caer Myrddin, meaning Merlin’s fort or castle). 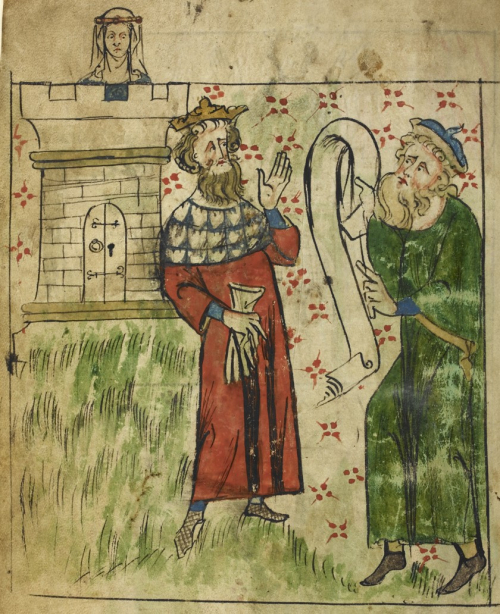 As a fortune-teller and shape-shifter, Merlin became associated with necromancy and the dark arts in the imagination of medieval Christians. The story of his birth was founded in the religious legend of the Harrowing of Hell. The demons of Hell, annoyed by Christ’s interference and his rescuing of souls from their domain, plot their revenge through the birth of an Antichrist. 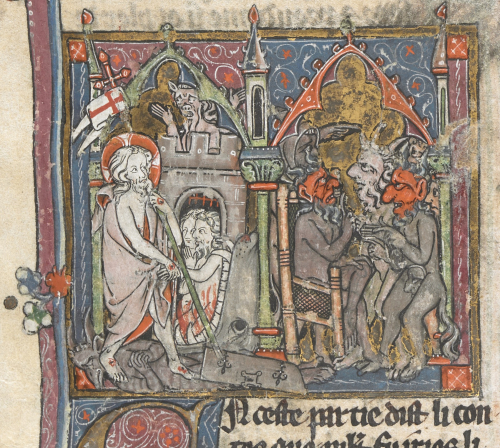 They send a devil to impregnate an innocent princess of Dyfed in Wales, but when the child is born, their evil plans miscarry as the devout mother finds a priest to baptise him before he is pulled into their evil orbit. This is Merlin, a child prodigy with magical powers and the ability to foretell the future, attributes that he decides to use on the side of good rather than evil. 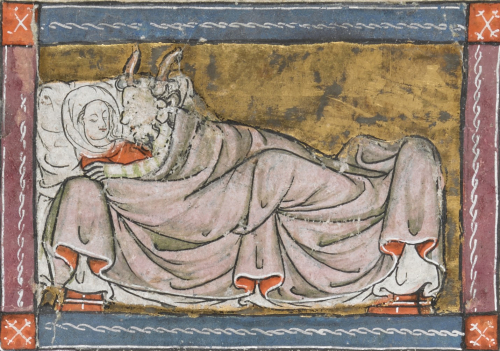 The earliest of the Arthurian texts to include Merlin was Geoffrey of Monmouth’s account in his Historia regum Britanniae (History of the Kings of Britain). For more information on this work and the surviving manuscripts of early legends, see, our article on Early Latin Versions of the Legend of King Arthur published on the Polonsky Medieval France and England, 700-1200 website.

Merlin first appears when, following the massacre of the British chieftains by the Saxon leader, Hengist, in the treacherous ‘Night of the Long Knives’, the British King Vortigern flees to Wales where he tries to build a strong tower to protect himself. But every night, the progress made by his builders is mysteriously undone when the foundations crumble. His wizards claim that only by mixing in the blood of a child who has no mortal father will he make the foundations sound. Merlin is found and brought to Vortigern for his purpose, but he is able to see a pool beneath the tower, in which lie two sleeping dragons, one white and one red, and he explains that the white dragon (i.e. the Saxons) will triumph over the red (i.e. the British). He then enters a trance and foretells the future of the Britons to the end of time, predicting the coming of a great king by the name of Arthur. 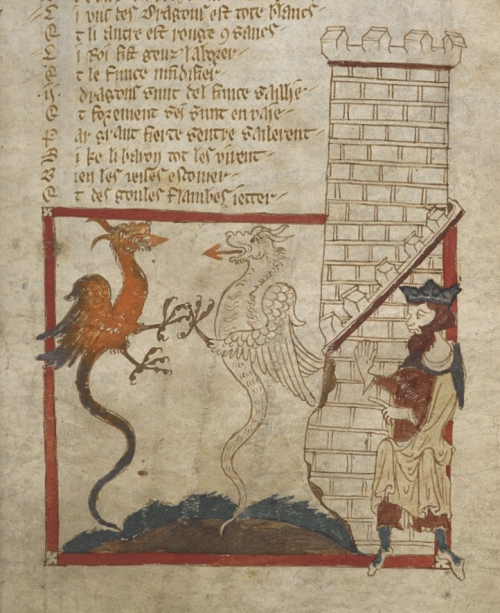 Perhaps Merlin’s most remarkable achievement is single-handedly transporting a ring of magical stones known as ‘the Giant’s Dance’ from Ireland to Salisbury Plain in Wiltshire to build Stonehenge. The earliest surviving picture of Stonehenge, showing Merlin helping to place the huge stones, is in a copy of the Roman de Brut, a verse chronicle of British history by a poet from Jersey named Wace, written in Anglo-Norman French. 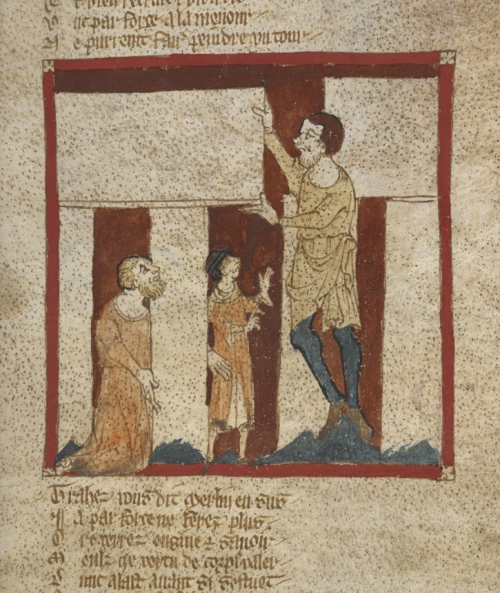 Merlin’s next undertaking is to orchestrate the marvellous conception, birth and education of the future King Arthur. As he foretells, the young boy pulls the sword from the stone and inherits his rightful kingdom and - with Merlin’s help and guidance - achieves greatness. But though Merlin uses his powers to warn his young protégé about the future, he is powerless to change events that have been ordained. One day he appears in the form of a young boy to Arthur, who is out hunting in the forest, revealing that Arthur is son of King Uther and of Igraine. Later, changing into an old man, he prophesies that Mordred, the son who Arthur has conceived with his half-sister Morgause, will one day destroy his father and the court at Camelot. 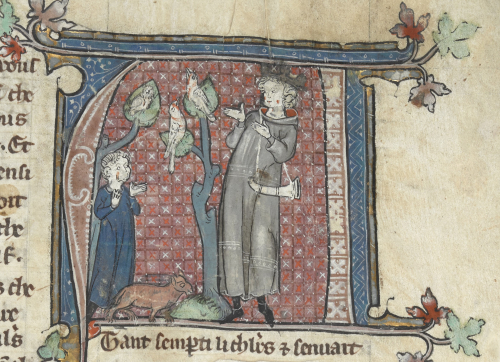 Though he is a trusted adviser to kings, Merlin remains an unpredictable character with strange habits and a menacing laugh that announces his sometimes-macabre intentions. In one episode, he changes into a deer and is served up as Caesar’s dinner, later returning as a wild man to interpret the Emperor’s dreams. 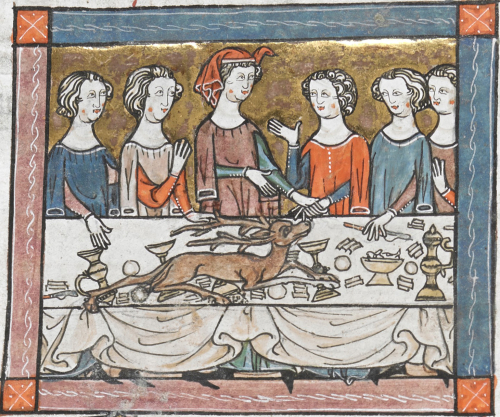 When he becomes obsessed with the fairy huntress, Niniane, he performs bizarre stunts for her that include setting two harpists alight with sulphur, saying they are evil sorcerers. 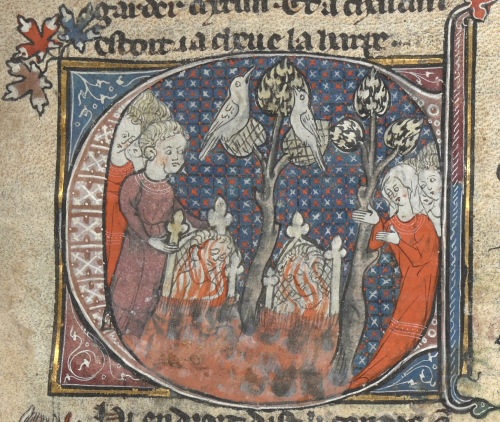 In the end Niniane brings about Merlin’s downfall. Having tricked him into revealing all his magical knowledge to her, she uses one of his spells to seal him in a stone tomb in the forest of Broceliande, or in some versions in an oak tree, until the end of time.

Stories of King Arthur and Camelot, alongside some of the most celebrated tales in medieval manuscripts, are featured in my recently published book, Dragons, Heroes, Myths & Magic: The Medieval Art of Storytelling, now on sale now in the British Library shop. Perhaps it would make the perfect Christmas gift for a medieval story-lover? 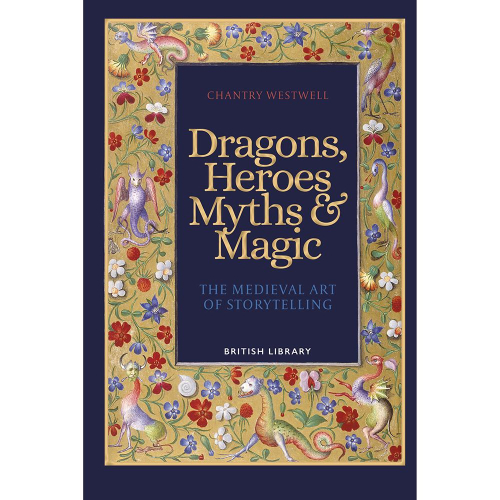