'Not lawful nor tolerable'

1567 was an unlucky year for Mary, Queen of Scots. February saw the dramatic end of her second husband Lord Darnley at Kirk o’ Field, when a group of Scottish nobles murdered him and his servant (either by suffocation or strangulation), before blowing up the house where they had been staying and leaving their bodies for discovery in an orchard nearby. In April, Mary was abducted by the chief suspect in Darnley’s murder, Lord Bothwell, who became her third husband in May. After a clash at Carberry Hill between her supporters and the lords clamouring for the punishment of Darnley’s killers, Mary was captured and imprisoned at Lochleven Castle on 17 June. Finally, on 24 July, she was forced to abdicate in favour of her infant son, Prince James.

Visitors to the British Library's major new exhibition, Elizabeth and Mary: Royal Cousins, Rival Queens, can see the detailed drawing of the Darnley murder scene, made for Sir William Cecil, together with a bird’s-eye view of the Battle of Carberry Hill in 1567. Both are display in the exhibition thanks to a generous loan from The National Archives. 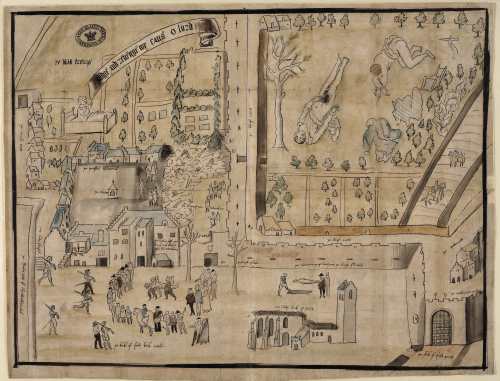 Bird’s-eye view of the murder scene of Lord Darnley, February 1567: reproduced with the permission of The National Archives, MPF 1/366/1 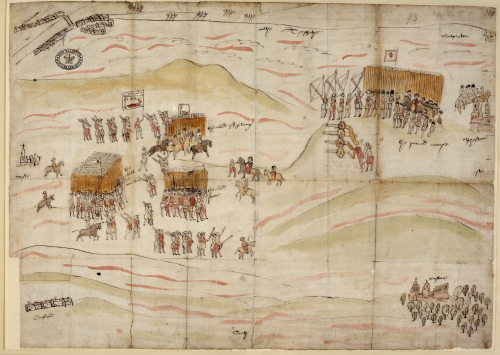 Bird’s-eye view of the Battle of Carberry Hill, 1567: reproduced with the permission of The National Archives, MPF 1/366/2

In the midst of this upheaval, Mary’s sister queen, Elizabeth I, took up her pen to offer some ‘plain reprehension of that which we find therein amiss’. Add MS 88966 is the original letter of instructions sent to her ambassador Sir Nicholas Throckmorton on 27 July, and is on public display for the first time in the exhibition. It is a remarkable statement of Elizabeth’s vision of monarchy as well as her views on Scottish politics. 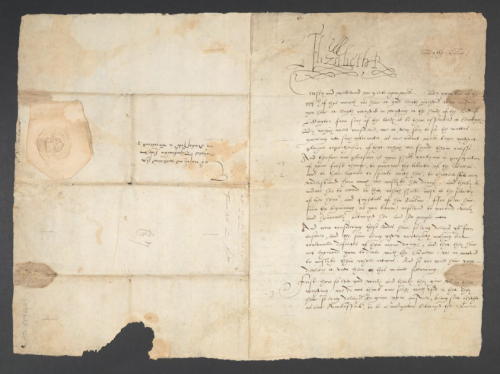 Elizabeth had already instructed Throckmorton to gain an audience with Mary, to advise a separation from Bothwell, something she regarded as ‘most to the safety of her honour and quietness of her realm’. The Scottish lords, however, had no intention of allowing Throckmorton to see Mary.

Their intransigence and flimsy excuses prompted a stern response from Elizabeth. Throckmorton was now tasked with rebuking the lords for their illegal and irreligious conduct in imprisoning Mary and addressing their claims that she had been a poor ally to them. Should the Scottish Lords depose Mary, she and other Christian monarchs would make themselves ‘a plain party against them … for example to all posterity’. God would undoubtedly support such an action: indeed, St Paul had commanded the Romans to be obedient to secular and religious authorities. Similarly, Christian law condemned rather than empowered subjects to depose their ruler. Any possible examples they might find in support of their actions, as they had published in ‘seditious ballads’, were none other than acts of rebellion.

Although Elizabeth detested Darnley’s murder and the Bothwell marriage just as much as the lords, it was ‘not lawful nor tolerable’ for inferiors to call their superiors to account by force, since it was not ‘consonant in nature that the head should be subject to the foot’. She countered the claims of some of the Lords that she had supported them without enthusiasm or only for self-interested reasons. Had the Earl of Morton forgotten that she had allowed him to take refuge in England during his political exile in the mid-1560s, when she could easily have delivered him to his death? With all this in mind, Throckmorton was forbidden to attend Prince James’s coronation. 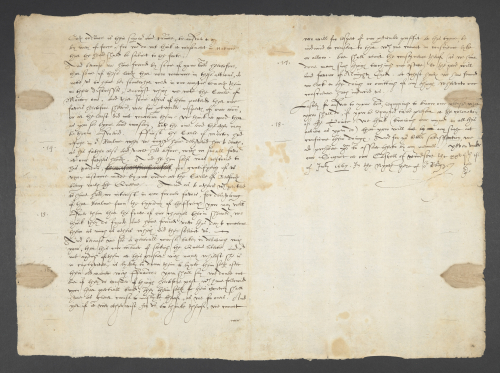 Elizabeth I’s letter to Sir Nicholas Throckmorton, with a detail showing the words ‘for we do not think it consonant in nature that the head should be subject to the foot’: Add MS 88966, f. 2v

Elizabeth’s powerful rhetoric had little effect. Throckmorton remained unable to see Mary, and two days after Elizabeth’s letter was sent the one-year old James was crowned. The relationship between Mary and Elizabeth was far from harmonious, but this letter shows that Elizabeth always respected Mary’s divinely ordained position, so much so that she was willing to go to war with Scotland to defend it. These sentiments were not shared by her leading councillors, who had begun to see Mary as a dangerous threat. When they brought about her execution in 1587, they tarnished these ideals forever.