In Tudor England and Stewart Scotland foreigners were termed ‘aliens’ or ‘strangers’. They settled mainly in southern and eastern England and eastern Scotland, either for short periods or more permanently. While often welcomed for their skills and experience or because they filled a gap in the labour market, immigrants could find themselves subject to both prejudice and discriminatory legislation. In 1521, for example, the mayor of London forced an Italian immigrant to place a lattice over his shop window and hang no sign above, as ‘he is but a Foreiyn’ (London Metropolitan Archives, COL/CA/01/01/005, f. 182r). 15 years later the printer Jean le Rous, originally from Normandy, found himself targeted during an anti-French riot on Fleet Street, in which the native Londoners shouted ‘down[e,] down[e] w[i]t[h] the frenshe dogg[e]s’ (London, The National Archives, SP 1/112, M. f. 223r). (In the late Elizabethan play, The Book of Thomas More, there is a scene set in the year 1517, and reputed to have been written by William Shakespeare, which describes a mob of Londoners demanding that the 'wretched strangers' in their midst be expelled.) After she returned to her homeland in summer 1561, many of her protestant subjects regarded Mary, Queen of Scots, with suspicion and hostility as both French and catholic. 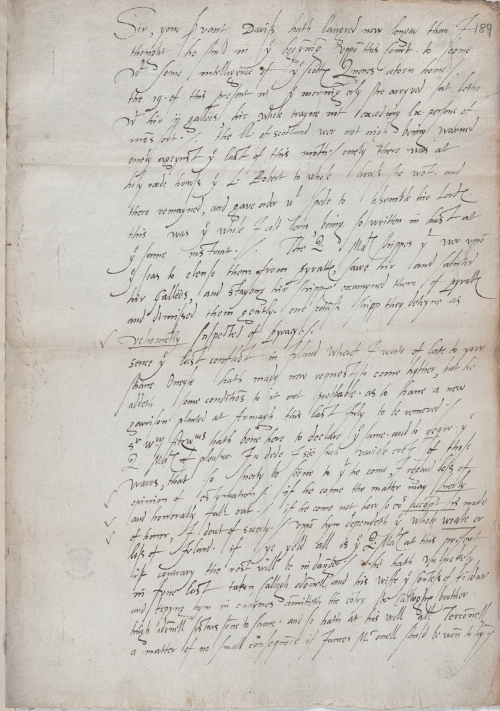 A letter from Sir William Cecil to Sir Nicholas Throckmorton, 26 August 1561, describing the arrival of Mary, Queen of Scots, and her French servants in Scotland: Add MS 35830, f. 189r

Yet, England and Scotland could be surprisingly diverse and tolerant places. Contemporary records suggest that 1% of Tudor England’s population was immigrant (a figure not exceeded until 1901). Lack of evidence makes it impossible to determine immigration levels in Stewart Scotland, but foreigners were certainly present. For example, they could be found at court, both as visitors and as permanent household members. Many of Mary’s servants had been with her since her days in France.  Similarly, the English crown welcomed talent from abroad, like the Bassano family of Venetian Jewish musicians and instrument makers. One of the Bassano brothers, Baptista, taught Princess Elizabeth Italian and how to play the lute between 1545 and 1552. In 1537 another Italian immigrant was even licenced to open a tennis court in London. Immigrants also prospered beyond the capital and the court. The Spanish goldsmith Martín Soza, who was probably a converso (a Jewish convert to Christianity) became sheriff of York in 1545.

Most immigrants came from neighbouring countries: in England they were from France, the Netherlands, and Scotland; while in Scotland they were usually English, Irish and Netherlandish in origin. Individuals from further afield like Luke de la Ark, who said he was from Cappadocia in Ottoman Turkey when he became an English denizen in 1541, were very rare. He was probably Orthodox Greek and perhaps originally named Loukios tis Erkilet. French people living in England traditionally held a wide variety of occupations, including as priests, servants, tailors and ironworkers. A significant number were skilled masters like surgeons, clockmakers, and bookbinders. One was a parchment maker, Guillaume du Quesnay. The Netherlanders, though more numerous, usually made more modest livings, for example as coopers and brewers, cobblers, weavers, and the like. Scots worked as farmhands, shepherds, labourers, and servants, mainly in the north-east. Immigrants in Scotland are mostly recorded as servants, but there were some masters like artists, moneyers, and gun founders. 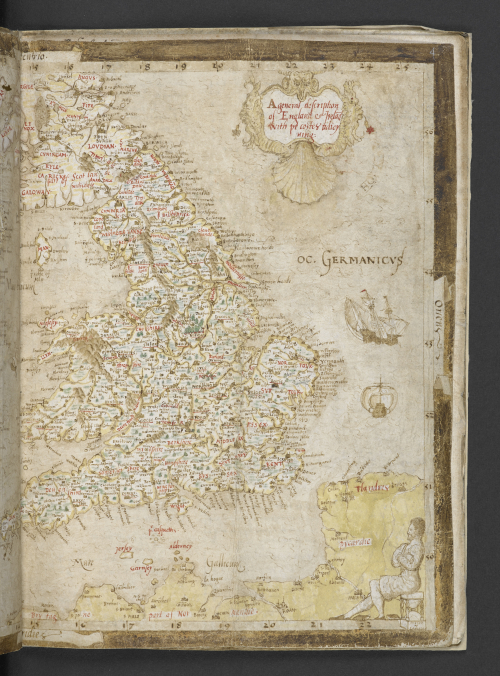 Part of a map of Ireland, England and Scotland, c. 1564–65, made by Lawrence Nowell for William Cecil, entitled ‘A general description of England and Ireland with the costes adioyning’: Add MS 62540, f. 4r

During Elizabeth I’s reign many immigrants were protestant refugees who had fled their homeland after the outbreak of the French Wars of Religion or the Dutch Revolt. Most were skilled craftsmen and women working in the cloth industry and the cloth trade.  Natives generally remained tolerant of these newcomers. 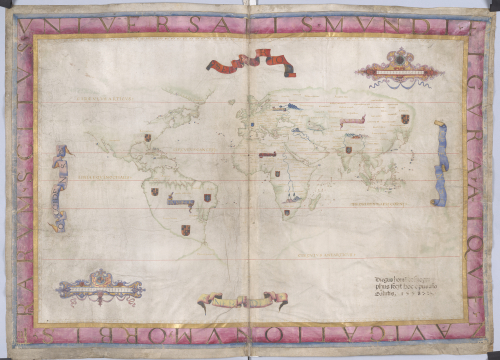 The expansion of English overseas exploration during the 16th century, from its origins in coastal trading at the beginning to Francis Drake’s voyage of circumnavigation in 1580, led to direct encounters with people from distant lands. The first native Americans were brought on return voyages from Newfoundland in 1501 or 1502. But Africans were already settled in the British Isles by the 11th century; and there is growing archaeological evidence of Africans in Roman Britain. During the early 16th century most Africans came to the British Isles from the Maghreb, Northwest Africa, via Spain and Portugal — like John Blanke, trumpeter at the court of Henry VII and Henry VIII between 1507 and 1512. Blanke seemingly arrived from Spain in Katherine of Aragon’s household in 1501. Like Catalina de Motril, one of Katherine’s servants, he too may have been an enslaved person, whose origins were morisco (a Muslim Moor convert to Christianity). Because the condition of their enslavement was not recognized in English common law, Blanke, de Motril, and presumably other moriscos would have become free when they landed in England. The same appears to have been true in Scotland, where Scots law permitted native serfdom but not enslavement. In 1549 a Moor was recommended to Mary of Guise’s service in the war against England, being as ‘scharp ane man as rydis [rides]’ (Scottish Correspondence of Mary of Lorraine, 1543-60, ed. A. I. Cameron (1927), no. 206). 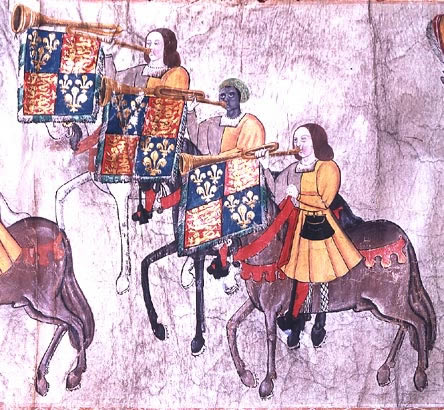 Detail of John Blanke from the Westminster Tournament Roll, by an unknown artist, 1511, by courtesy of London, College of Arms

Over the course of the 16th century people from South, East and Central Africa, as well as from the Maghreb, could be found in the British Isles. A man called Diego, probably originally from Senegambia in West Africa, joined Drake’s crew in the Caribbean in July 1572, returning with him to England as his servant. Africans dwelt in London, Edinburgh, and other big settlements, but also in towns and villages like Blean in Kent. By the close of the century we know that people of African descent were born, lived, and died in England, among them Helen Holman, who was baptised in St Andrew, Plymouth, on 2 May 1593.

The reigns of Elizabeth I of England and Mary, queen of Scots, and the relationship between these two rulers, are the subject of a major British Library exhibition. Elizabeth and Mary: Royal Cousins, Rival Queens is on in London until 22 February 2022. Tickets can be bought in advance or on the day, subject to availability.