Our work on revising the online descriptions of manuscripts in the Harley collection continues apace. One manuscript that has recently had its online description updated is Harley MS 2682, an 11th-century volume known as the ‘Cologne Cicero’. It has been recognised for centuries as an important witness to a number of the works of the famous Roman statesman, lawyer, scholar and orator, Marcus Tullius Cicero (d. 43 BCE). 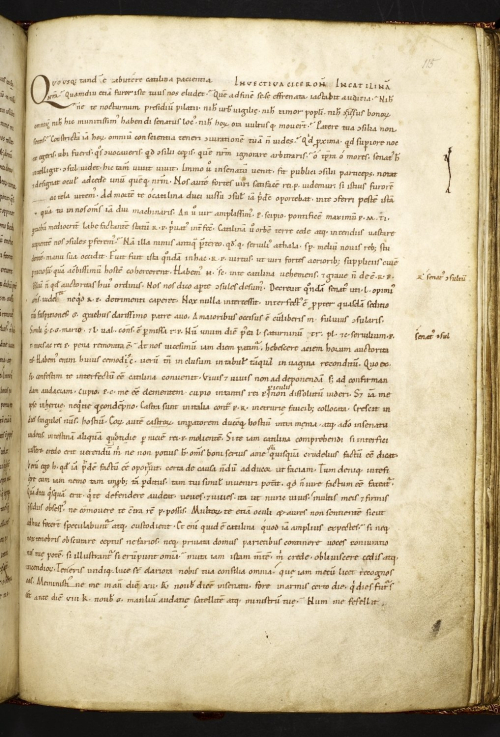 The beginning of Cicero's Orationes in Catilinam (western Germany, 2nd half of the 11th century): Harley MS 2682, f. 115r

The first person to collate the text of the ‘Cologne Cicero’ — the process of comparing different manuscripts of a work in order to establish its correct text — was François Modius (1556–1597), a Flemish jurist and humanist classical scholar. With the help of the Cologne theologian, Melchior Hittorp (c. 1525–1584), Modius was given access to the manuscript before 1584 when he published some of his collations. At that point, it was in the library at Cologne Cathedral, and it seems that it was originally made in the scriptorium there. The next scholar to collate the text of the ‘Cologne Cicero’ was Janus Gulielmus, or Johann Wilhelm (1555–1584), who called it the optimus (‘best', 'most useful’) of the three manuscripts he was using. In 1688, the manuscript was taken from Cologne Cathedral by the German classical scholar, Johann Georg Graevius (1632–1703). Graevius’s library, including our manuscript, was bought in 1703 by Johann Wilhelm II, Elector Palatine (1658–1716). The Wilhelm library was bought in turn by the merchant and diplomat Giovanni Giacomo Zamboni (d. 1753), sometime before 1724, from whom the 'Cologne Cicero' was purchased on 20 October 1725 by Humfrey Wanley (1672–1726), librarian to Edward Harley, 2nd Earl of Oxford (1689-1741).

As well as being collated intensively in the 1500s and 1600s, Harley MS 2682 is testament to the interest in studying Cicero’s works in the 11th century. It seems to represent the oldest attempt at bringing together all of Cicero’s works in one volume. What is more, it is an example of medieval textual criticism since the three so-called ‘Caesarian speeches’ were copied twice, in two different versions. The first version seems to have been imperfect, only containing the first half of the third speech, Pro rege Deiotaro (On behalf of King Deiotarus before Caesar). It seems that the compiler(s) of the ‘Cologne Cicero’ realised this shortcoming of the first exemplar for the ‘Caesarian speeches’, and found another manuscript — with the full text — from which to copy the three speeches once again. 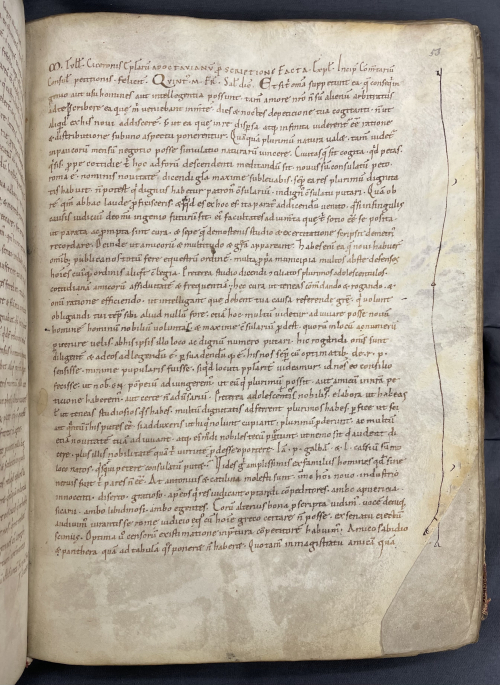 The pages of the ‘Cologne Cicero’ also show marks of continued use during its medieval history. There are numerous marginal annotations and so-called nota marks, drawing attention to a particular sentence or paragraph. Some common forms of nota marks are little pointing hands, manicules, or monograms of the word nota itself. On one page marking the beginning of De petitione consulatus (On running for the consulship) (f. 53r), the nota monogram runs down the entire outer margin. Someone must have found this page especially important!

To read more about the attention that medieval scholars and readers paid to the texts of the Latin classics, see our article on ‘The Latin Middle Ages’.