Proclamations were printed royal directives. Their reading was a public and ritualized business, attended by local officials, held at prominent sites and often heralded by trumpets. Royal policy and royal authority were declared, ending with the exhortation to ‘God save the Queen’ (or King). Proclamations could also present the rationale of royal policy — or at least the rationale thought fit for public consumption. They were occasions of civic ritual, both to declare royal power and to present news and policy in ways persuasive to the public. The proclamation read in the City of London on 6 December 1586 is a powerful example of this at a particularly charged moment: A true Copie of the Proclamation lately published by the Queenes Maiestie, vnder the great Seale of England, for the declaring of the Sentence, lately giuen against the Queene of Scottes, in fourme following, dated as at the manor of Richmond on 4 December, and printed in London by the Queen’s printer, Christopher Barker. The copy currently on display in our major exhibition, Elizabeth and Mary: Royal Cousins, Rival Queens, belonged to Robert Beale, Clerk of the Privy Council. Beale had long been concerned with the fate of Mary, Queen of Scots — he had been on four missions to the imprisoned Queen and was regarded as an expert on the case against her by his superiors. He had been present at her trial (drawing a sketch of the court) and in February 1587 would deliver the commission for her death to Fotheringhay Castle and read it at her execution. He would also provide another drawing of her execution (also displayed in the exhibition). The public proclamation of Mary’s trial and conviction was an important stage in the process of moving towards her execution. Beale was aware of the importance and solemnity of the proclamation, and recorded its reading in the City of London: ‘Looke ye howe solemnly this was proclaymed in the presenc[e] of the L[ord] Mayor and divers of his brethern’. 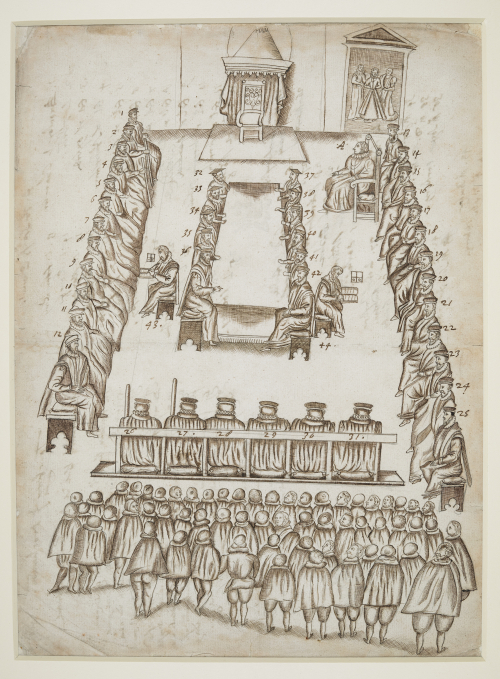 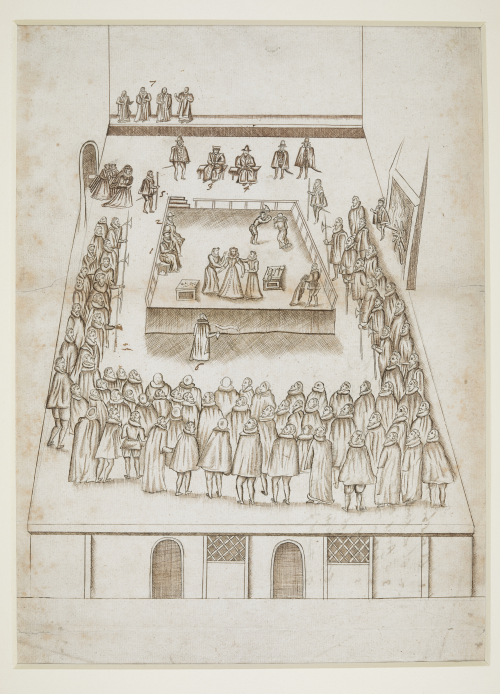 A contemporary account expands on the reading of the proclamation as an act of publicity and civic ritual (The Progresses and Public Processions of Queen Elizabeth, ed. by John Nichols, 3 vols, London: John Nichols and Son, 1823, II, 497). ‘The Lord Mayor, assisted with divers Earles, Barons, the Aldermen in their scarlet, the principall officers of the citty, the greatest number of the gentlemen of the best account in and about the citty, with the number of eighty of the gravest and worshipfullest cittizens in coates of velvet, and chaines of gould, all on horsebacke in most solemne and stately manner, by sound of foure trumpets, and ten of the clock in the forenoone, made open and publique proclamation and declaration’ of Mary’s sentence. The Town Clerk openly read the proclamation, whilst the Serjeant-at-Arms ‘with loud voyce solemnly proclaimed’ it at four places in the City. At the same time, the proclamation was read by the Sheriffs of Middlesex in Westminster and London outside the City. The proclamation was met with ‘the greate and wonderful rejoycing of the people of all sorts, as manifestly appeared by the ringing of bels, making of bonfires, and singing of psalmes, in every of the streets and lanes of the Citty’.

The proclamation laid out at length — over three sheets (pasted together by Beale) — the legal and political basis for Mary’s trial and conviction. It declared Elizabeth’s ‘great griefe’ at Mary’s involvement in conspiracy, ‘tending directly to the hurt and destruction of our royal Person, and to the subversion of the Estate of our Realme, by forrein invasions, & rebellions at home’; that she had agreed to the trial demanded ‘by sundrie Lordes of our Nobilitie, and others our loving subjectes’; and that she had let her desire for clemency be overborne by the advice and requests of her subjects in Parliament. She was overcome by her grief at Mary’s conspiracy against her life, ‘but also overcome with the earnest requests, declarations and important reasons of all of our said Subjectes, the Nobles and Commons of our Realme, whose judgement, knowledge and naturall care of us and the whole Realme. wee knoweth dothe farre surmount all others being not interessed therein, and so justly to bee esteemed’. The measured tones of the proclamation, presenting a story of a reluctant Queen bowing to the demands of her loyal and loving subjects, downplayed the anger in Parliament and the depth of Elizabeth's resistance. Her prevarication over actually executing Mary would continue for another two months. 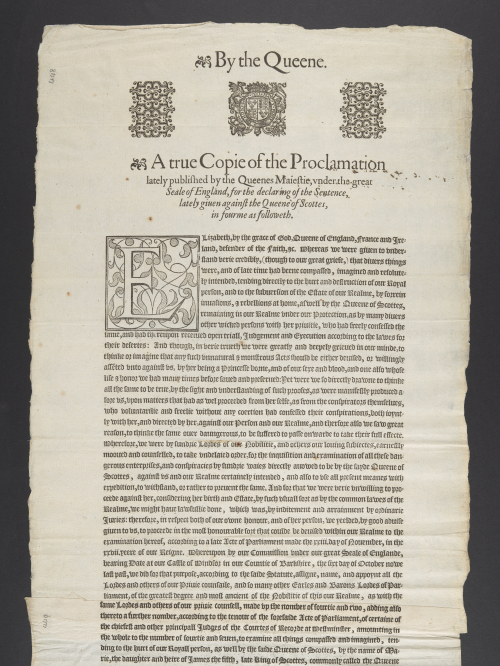 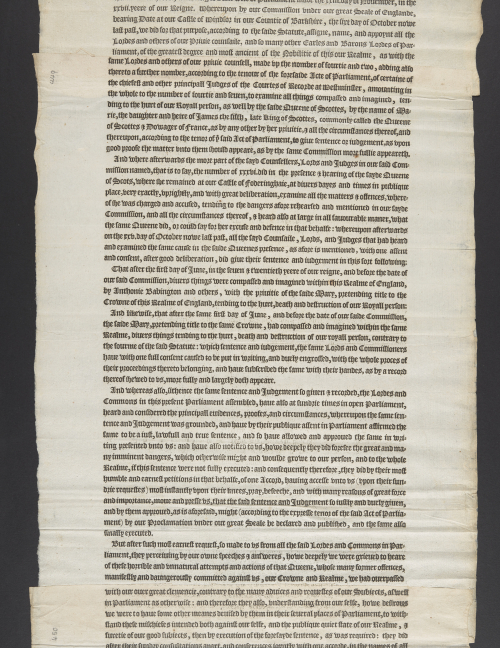 The text also downplayed another aspect of the proclamation. In the ‘Act for the Queen’s Safety’ of 1585 (under which Mary had been tried), Elizabeth had inserted a proviso: that publication of the proclamation enabled anyone to kill Mary, without the Queen’s execution warrant. This is perhaps hinted at — no more — in the passage describing her acquiescence to the execution for the sake of the Realm and her subjects, where she states ‘howe desirous we were to have some other meanes devised by [our subjects] in their several places of Parlament, to withstand these mischiefes intended against our selfe and the publique quiet state of our Realme, & suretie of our good subjects, then by execution of the aforesayde sentence, as was required’. Assassination by a loyal subject would remain an option Elizabeth preferred even as she signed the death warrant.

Elizabeth and Mary: Royal Cousins, Rival Queens is on at the British Library in London until 20 February 2022. Tickets can be bought in advance or on the day, subject to availability.

Posted by Ancient, Medieval, and Early Modern Manuscripts at 4:09 PM