For many of us, New Year is a time to celebrate with friends and family, enjoy extravagant firework displays, and sing Auld Lang Syne. At the Tudor court, in contrast, the monarch and other courtiers participated in a ritual New Year’s gift-giving ceremony. This process of gift exchange was recorded in a New Year gift-roll.

Elizabeth I presided over 45 New Year gift-giving ceremonies and a remarkable 24 gift-rolls survive from her reign, several of which are held at the British Library. Typically, the Elizabethan New Year gift-rolls consist of 4 or 5 parchment membranes sewn end to end and measure 3 to 4 metres in length. On one side they list the names of donors — in order of social rank and official status — with a description of their gifts to Elizabeth. The reverse contains a corresponding list of those who received gifts (usually gilt plate) from the Queen.

Visitors to our exhibition Elizabeth and Mary: Royal Cousins, Rival Queens will be able to see the 1567 New Year’s gift-roll, displayed to show the entry for a gold font, weighing 333 ounces, which Elizabeth sent to Mary, Queen of Scots, for the baptism of Prince James in the Chapel Royal at Stirling Castle on 17 December 1566. As this gift was given outside of the New Year gift-giving ceremony, it is listed under ‘Sundry Gifts’ at the end of the roll. 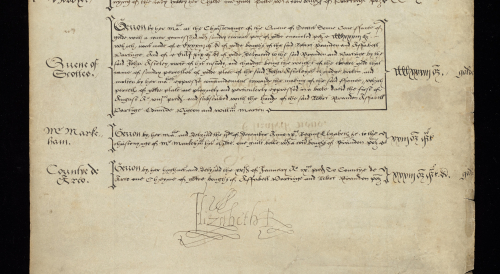 The surviving gift-rolls provide a fascinating insight into the variety of gifts presented to Elizabeth over the course of her reign, from elaborate jewellery, gold plate and luxury clothing to finely embroidered cushions, handkerchiefs, gloves, slippers and confectionary. For example, the 1562 New Year’s gift-roll records that Kat Ashley, who was Elizabeth’s governess and Lady of the Bedchamber, gave her 12 handkerchiefs edged in gold and silver. In 1576, Lady Mary Gray, the Queen’s first cousin once removed, gifted a cushion of purple and crimson velvet, embellished with pearls, spangles and 4 tassels. Sir Philip Sidney, the soldier and poet, presented the Queen in 1584 with a pair of black slippers embroidered with Venice gold, pearls, and small garnets.

In 1562, Sir William Cecil, Principal Secretary and Elizabeth’s most trusted and influential councillor, gave her a silver ink well and stand, with a set of matching silver gilt weights and measures, a pen knife and seal. The gift-roll records that the Queen gifted Cecil and his wife Lady Mildred Cecil a gilt cup and cover at the baptism of his son William Cecil, who, like his elder brother and namesake, died young.

The 1588 gift-roll records that the Queen’s great favourite, Robert Dudley, Earl of Leicester, gave her an elaborate gold carcenet (richly bejewelled necklace) of letters and his emblem of ragged staves, as well as a sun design set with Elizabeth’s picture and garnished with diamonds and a large ruby. This was Leicester’s last New Year’s gift to Elizabeth.

In the same year, Robert Devereux, 2nd Earl of Essex, gave Elizabeth a gold bodkin, with a gold flower hanging from it covered in diamonds, 2 pendants of diamonds and 1 pearl pendant. Charles, 2nd Lord Howard of Effingham and Lord High Admiral, gave a black velvet sea cap embroidered with ships and anchors in ragged pearl, with an agate, diamonds and a ruby.

The gift-rolls also reveal that the Queen received many gifts of confectionary, designed to appeal to her sweet tooth. The sergeant of the pastry John Bettes gave her a quince pie in 1562 and in 1588 Mr Morgan, the queen’s apothecary, presented his traditional gift of candied sugar and dried plums, while John Dudley, sergeant of the pastry, baked an ‘oringed pie’.

The New Year’s Gift Rolls are a major source for the history of royal culture, gift-exchange, the court and its personnel, as well as Tudor costume and jewellery. We hope you will enjoy looking at them in more detail using the links below: