Portraits of Elizabeth I

The British Library’s current major exhibition Elizabeth and Mary: Royal Cousins, Rival Queens offers visitors the opportunity to see five portraits of Elizabeth I. At the start of the exhibition, Elizabeth’s beautiful mother of pearl locket ring is displayed open to reveal enamelled miniature portraits of her and Anne Boleyn. Elizabeth is depicted in profile as she looked in the mid-1570s; her mother’s likeness is similar to a portrait medal struck in 1534. 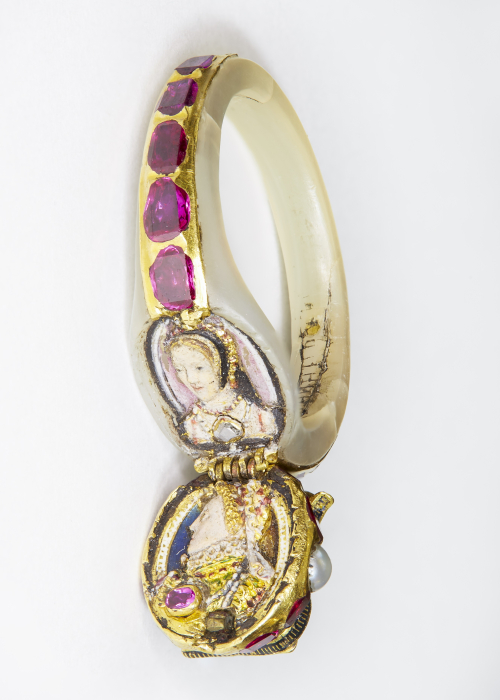 Inside the ring there is a small oval plate of gold ornamented in enamel, with a phoenix rising in flames. A mythological bird reborn from its own ashes, the phoenix became associated closely with Elizabeth after her accession to the throne of England in 1558. It symbolised the virtue of chastity, but also Elizabeth’s reversals of fortune under her father, brother and sister, and her restoration of Protestantism from the ashes of the persecutions of Mary I’s reign. Elizabeth had endured her deepest calamity when not yet 3 years old. In July 1536, she was declared illegitimate and excluded from the succession, following Anne’s execution on charges of adultery and incest. The locket ring suggests that Elizabeth never accepted the guilty verdict and found ways to honour the memory of her mother.

On a number of occasions when she was a child, marriage negotiations were opened on Elizabeth’s behalf, only for them to collapse due to her illegitimacy. But, from autumn 1542, Henry VIII made gestures towards rehabilitating his daughter, describing her as ‘endewed with vertues and qualities agreable with her estate/ whom we esteme and regarde, as natural inclination with respecte of her place and state doth of congruence require’ (Add MS 32650, f. 127r). As a precaution against dying on campaign in a new war with France, in spring 1544 Henry restored both his daughters Mary and Elizabeth to the succession, but did not legitimate them. Among the most striking pieces of evidence for Elizabeth’s new-found status is a portrait of her by the court painter Guillim Scrots. Commissioned in about 1546, it is one of the few likenesses of Elizabeth made before she became queen. Dressed in crimson silk and the cloth-of-silver ‘tissued’ with gold that was restricted to the royal family, she is portrayed as self-possessed, pious and scholarly. She marks her place in the book she is holding, possibly a primer. Another book, a Bible perhaps, sits on a lectern in the background. The portrait may, in fact, have been completed during the reign of her brother, Edward VI, which is probably also when the near-contemporary copy on display in the exhibition was made.

At her brother’s request, in May 1551 Elizabeth sent Edward another portrait of herself, telling him ‘for the face, I graunt, I might wel blusche to offer, but the mynde I shal neuer be asshamed to present’. 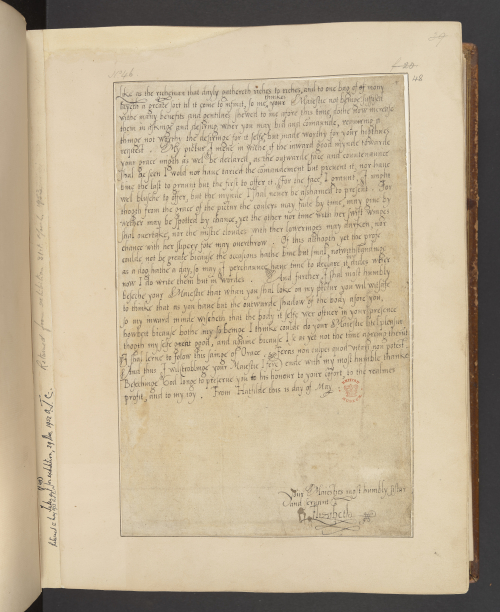 Made by the court painter Levina Teerlinc for marriage negotiations underway between Elizabeth and a French prince, the portrait itself does not appear to have survived. But another likeness of her from this time does, at least in a mid-17th-century copy generously loaned to the exhibition. Elizabeth appears in a family portrait, the original of which probably dated to Edward’s reign because of the prominent position he occupies in the centre of the composition, with Henry VIII to his right, and both his sisters to his left. The figure standing behind Edward and his father has been identified as the court fool Will Somer, who served in the royal household for many years. Somer’s presence here, and in a number of other royal portraits, perhaps represents continuity between reigns or offers ways of interpreting each image allegorically. 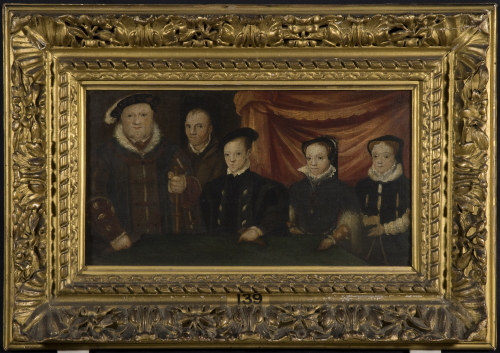 Group portrait of Henry VIII and family by an unknown artist, 17th century: By kind permission of His Grace, the Duke of Buccleuch & Queensberry, KBE, KT and the Trustees of the Buccleuch Chattels Trust

Even after she became queen in November 1558, Elizabeth’s reluctance to sit for her portrait continued. Most early portraits of her as queen are simple images depicting her in black, some of them poorly executed. In April 1565, during an audience with the English ambassador, Catherine de’ Medici had complained ‘by that that everie bodie telleth me [of Elizabeth’s beauty], and that which I see painted, I must say she hath no good painters’. ‘I will send my self a painter ouer’ to England, she concluded (London, The National Archives, SP 70/77, M. f. 125v). Over the next few years Elizabeth’s portraiture changed, with the production of more realistic likenesses for the purpose of marriage negotiations. These include a full-length and a small portrait bust, both recently attributed to the English painter George Gower, and made directly from life. The portrait bust, currently on loan to the exhibition, may have been commissioned specifically for presentation to Archduke Charles II of Austria, with whom marriage negotiations were underway. In June 1567, Elizabeth sent the chief proponent of the Austrian match, Thomas Radcliffe, 3rd earl of Sussex, as her ambassador to the Hapsburg court. He probably carried this portrait bust with him, which he showed to Margaret of Parma, the governor of the Netherlands. One of Margaret’s courtiers declared that the portrait ‘lacked but speche’ (London, The National Archives, SP 70/92, M. f. 19r). Capturing her guarded self-possession, it is among the very best likenesses of Elizabeth, then aged about 34. 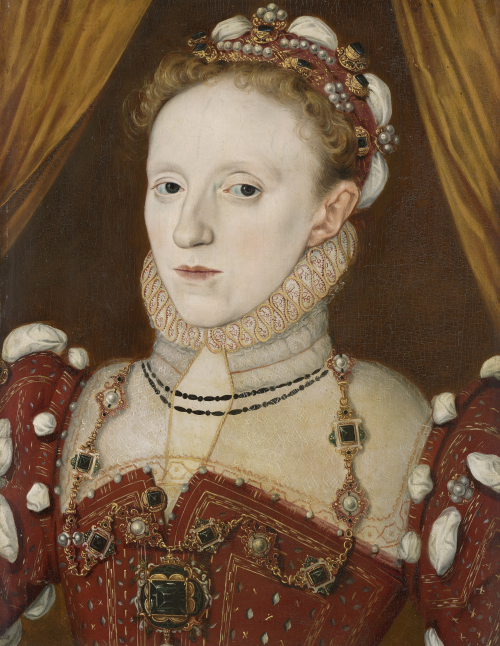 As Elizabeth aged, her portraiture became more elaborate and less lifelike, as realistic depictions of her were no longer required for the purpose of marriage negotiations. The queen was still occasionally painted from life, as for instance in the ‘Darnley portrait’ of about 1575 (London, National Portrait Gallery, 2082). But most works were based on patterns. One imposing example, displayed in the exhibition, dates to the late 1580s. Elizabeth is shown in her Parliament robes of ermine-lined crimson velvet, which create an exaggerated silhouette, subsuming her as an individual into an icon of queenship. Demand from her loyal subjects for Elizabeth’s portrait was growing, particularly after the outbreak of war with Spain in 1585, and this painting may have been commissioned for a public space like a guildhall. 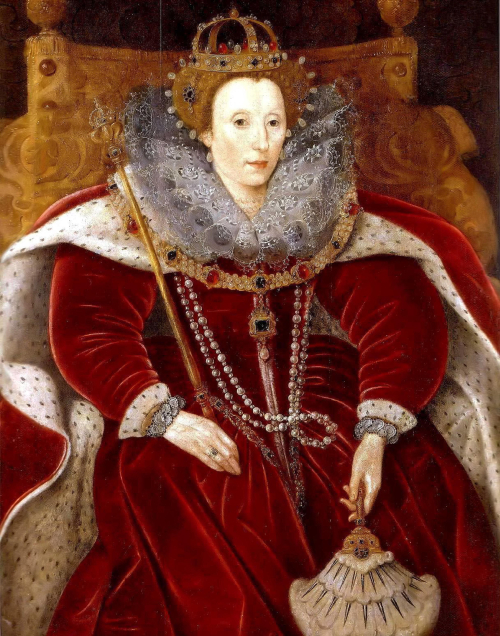 Portrait of Elizabeth I by an unknown artist, late 1580s: Private Collection