The earliest surviving detailed map of Scotland is now on display at the Wardlaw Museum in St Andrews, as part of the British Library’s Treasures on Tour programme. The map was compiled by John Hardyng, who was born in 1377 or 1378, probably in Northumberland, and lived most of his life during the Hundred Years’ War between England and France. He joined the household of Henry Percy (‘Hotspur’) when he was 12 years old, and fought for the Percys in Anglo-Scottish border battles. He also served in France during the reign of Henry V, who sent him on a spying mission to Scotland in 1418. Hardyng is best known for his verse Chronicle of the history of Britain, in which he set out his fervent belief in the right of English kings to rule over Scotland. He was so determined to prove his case that he forged a series of documents purporting to provide corroborating historical evidence. 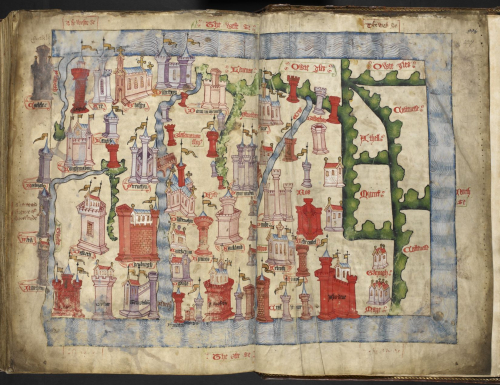 In 1457, Hardyng presented the first version of his Chronicle to King Henry VI of England, as part of his failed attempt to instigate an invasion of Scotland. The Chronicle is accompanied by this colourful map, spread across two pages, which depicts a very rectangular Scotland with west at the top. Hardyng doubtless drew on his earlier years of reconnaissance in Scotland in compiling his map. It includes much more topographical information and many more towns right across Scotland than in earlier surviving maps. The castles and walls of the towns are remarkably varied, while at Glasgow and Dunfermline the churches are drawn instead. The rivers are very clearly marked, with the River Forth, bridged at Stirling, running from top to bottom, and almost cutting the kingdom in two. 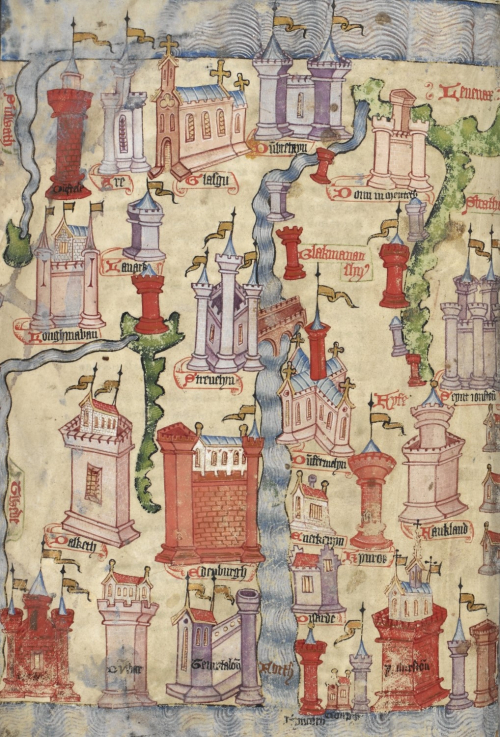 The level of detail, which Hardyng hoped would help an invading army, is strikingly different from earlier maps of Scotland. There is very little detail relating to Scotland in the small map of the world that was copied in 11th-century England and preserved in the collection of Sir Robert Cotton. East is at the top in this map, and the prominent islands to the north (on the left) are labelled ‘Orkney islands’ in Latin. 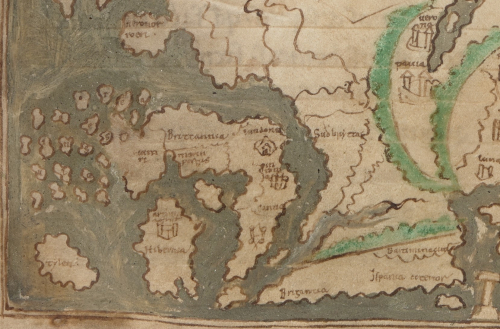 Detail of the 11th-century map of the world showing Britain and Ireland: Cotton MS Tiberius B V/1, f. 56v

Matthew Paris (d. 1259) produced several maps of Britain from his monastery at St Albans in Hertfordshire. In this map, included in his Abbreviatio Chronicorum, Scotland is shown in two parts, joined by a bridge at Stirling. Rivers are prominent and many places are labelled, including Glasgow, Edinburgh, Dunfermline, Dundee, Arbroath and Aberdeen, as well as Galloway, Caithness, Sutherland and Orkney. 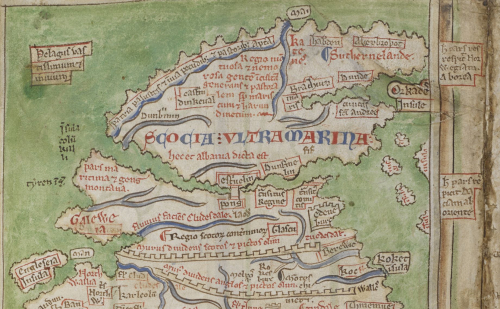 In the mid-1560s, just over a century after John Hardyng compiled his map, the antiquary Laurence Nowell was producing new maps of Scotland. Like Hardyng, Nowell put west at the top in this small map, but he included far more detailed information, making this the most accurate map of Scotland at that time. It has recently been on display at the British Library in the exhibition Elizabeth and Mary: Royal Cousins, Rival Queens. 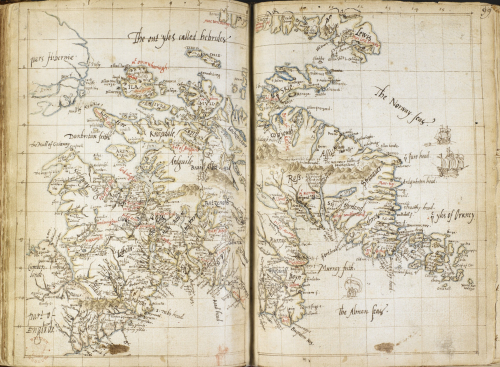 John Hardyng’s map is on display at the Wardlaw Museum in St Andrews from 20 February until 3 July 2022. The museum is open seven days a week and entry is free. You can find out more about Hardyng’s life, his Chronicle and his map in James Simpson and Sarah Peverley’s book.

The Treasures on Tour programme is generously supported by the Helen Hamlyn Trust. The British Library is working with other libraries, museums and galleries to share our collections across the UK. Last year we loaned the Gospels of Máel Brigte to the Ulster Museum, as well as the Bodmin Gospels and Pascon Agan Arluth (a Cornish Passion poem) to Kresen Kernow in Redruth, Cornwall, as part of this programme, and we will be announcing additional loans as part of ‘Treasures on Tour’ over the coming months.