Meaning in the margins of the Theodore Psalter

The British Library has loaned four manuscripts to an exhibition at the Rietberg Museum in Zurich, In the Name of the Image: Imagery between Cult and Prohibition in Islam and Christianity, which opened on 4 February. The exhibition takes a comparative, cross-cultural perspective to trace the varying approaches of Islam and Christianity towards the use of imagery. On loan from the Library are three lavishly illuminated Persian manuscripts from the 16th-17th centuries, together with one of our most precious illuminated Greek manuscripts, the 11th-century Theodore Psalter (Add MS 19352). 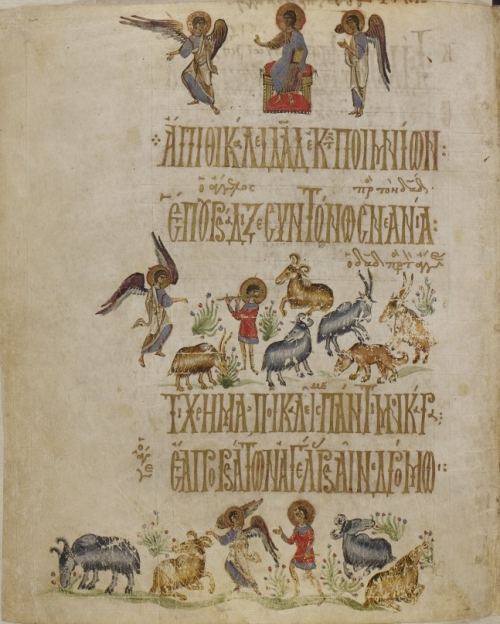 The beginning of the twelve-syllable poem on David, in the Theodore Psalter: Add MS 19352, f. 189v

Completed in 1066 at the Stoudion Monastery in Constantinople, the Theodore Psalter is one of the richest illuminated Greek manuscripts to survive. It is named after the monk Theodore, who wrote at the end of the book that he was both the copyist and illuminator. The book contains the Psalter in Greek, distributed in 20 units (kathismata) corresponding to the use of the Psalms in Byzantine liturgy, as well as a poem about the life of the Prophet David and the appendix known as the Biblical Odes. With its 440 coloured illustrations, placed in the margins of its 208 folios, this manuscript is the most fully illuminated Psalter to survive from the Byzantine Empire.

The Theodore Psalter belongs to a special group of illuminated Psalters called ‘marginal psalters’. These manuscripts place the biblical text in the centre of the page leaving ample margins for illustrations that are linked to the corresponding passages of the biblical text with red and blue strokes. 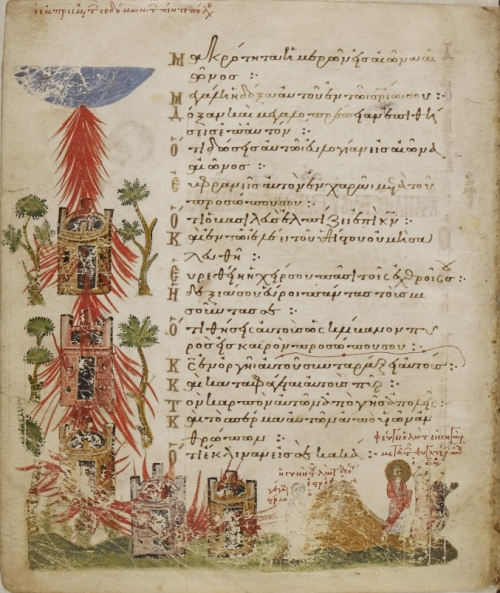 Burning of Sodom and the five cities and Loth fleeing with his family, illustrating Psalm 21:10 ‘You shall make them [the enemies of the king] like a fiery furnace’, in the Theodore Psalter: Add MS 19352, f 21v

This layout resembles the structure of so-called catena manuscripts, named after the Latin word catena, which means ‘chain’ or, in a more abstract sense, a series of loosely related items, like the links of a chain. These contain biblical commentaries with the biblical text in the centre of the page and the commentary in the margin, organised in dense units or figural shapes. The link between the biblical text and the corresponding units of the catena commentary is marked with an elaborate system of signs and letters which resemble the strokes in the Theodore Psalter.

Angel pulling out the boastful tongue, linked to Psalm 12:4 with a blue stroke, 'May the Lord destroy all deceptive lips', in the Theodore Psalter: Add MS 19352, f 11v 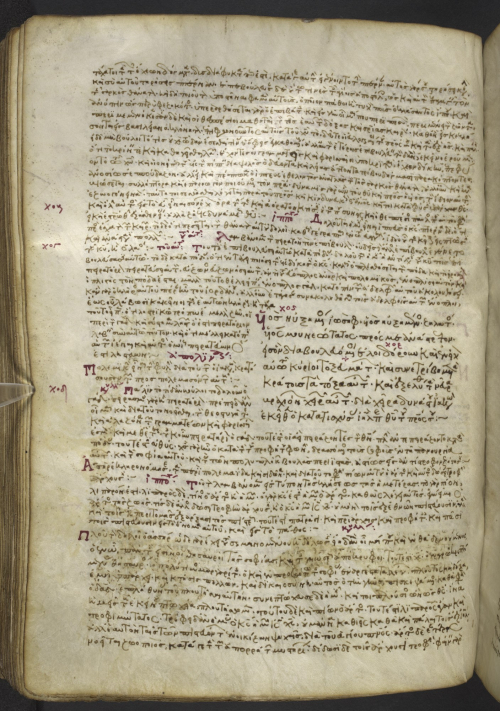 Greek catena commentary to the book of Genesis (49:22) with the biblical text in centre, the commentary surrounding it. Links are marked with red numbers written above the lines of the biblical text and on the margin with red. Octateuch with Catena, 12th-13th century, eastern Mediterranean: Add MS 35123, f. 88v

This similarity in layout between catena commentaries and the illustrations of the marginal psalters often helps us understand the rationale of the illustrations of the Theodore Psalter. Some images of the manuscript do not appear to have any obvious relationship to the texts they are linked to. They depict scenes from the life of Christ or saints, even later historical events, which are seemingly unrelated to the adjacent Psalms. Their connection, however, can be explained if we check the relevant passages in the catena commentaries.

An interesting case is Psalm 45 which is about a royal wedding where the bride is addressed with the words ‘Listen, oh daughter behold and incline your ear … for the king desired your beauty’ (Psalm 45: 11). Right next to this passage in the Theodore Psalter, we see an image of the Annunciation, with the Virgin in the centre flanked by the Archangel Gabriel and the Prophet David.

Illustration to Psalm 44: 11 representing the Annunciation with the Archangel Gabriel and the Prophet David flanking the Virgin: Add MS 19352, f. 56v

The connection between text and image becomes clear if we look up the passage in a catena manuscript. In a 17th-century copy of an 11th-century compilation, the passage is explained by a quotation from the 4th-century theologian, Athanasius of Alexandria, who writes that ‘this phrase relates to the Virgin Mary and foreshadows her annunciation by the Archangel Gabriel. David addresses the Virgin as his daughter because she was born from his seed and after him.’

Interpretation of Psalm 45:11 from an 11th-century catena compilation by Nicetas of Herakleia beginning with the name of Athanasius written in red ink on the margin in a 17th-century copy: Harley MS 5677, f. 136v (detail)

This commentary explains every element of the image in the Theodore Psalter: both the Archangel addressing the Virgin and David, who seems to be talking to her. It looks like a very accurate visualisation of this commentary.

At first sight, the illustration added to Psalm 26:5 (‘I hate the assembly of evildoers and I will not sit with the ungodly’) looks unrelated to the biblical text. It depicts iconoclasts destroying a sacred image. If we check the catena commentaries, however, the short interpretation added to this phrase in the margin of a late 10th-century manuscript equates the ‘evildoers’ of the Psalm with ‘pagans and heretics’. 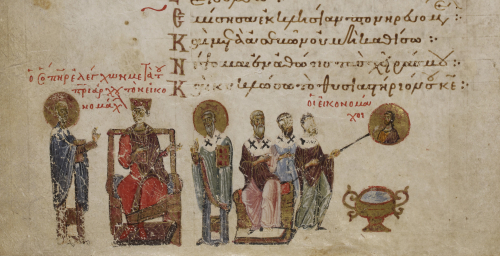 For the illustrator of the Theodore Psalter, this identification of the ‘evildoers’ as ‘heretics’ meant the heresy of the iconoclasts, who interpreted the biblical commandment against graven images to the letter and destroyed pictures and icons. The illumination visualises this interpretation of the ‘evildoers’ who are represented as they remove the image of Christ from a wall. As a result, the just, who ‘will not sit with the impious’, are identified with the defenders of the icons, St Theodore the Stoudite (759–826) and Patriarch Nicephorus of Constantinople (758–828), who are depicted arguing with the iconoclast emperor.

You can now admire the exceptional animated commentaries of the Theodore Psalter in the exhibition In the Name of the Image at the Rietberg Museum in Zurich until 22 May 2022.