We recently encountered a mysterious medieval manuscript during our current Harley cataloguing project. In the three centuries that it has been in the Harley collection, no one realised the true identity of the manuscript with the shelf-mark Harley MS 2874. Contributing to this may be the fact that its main contents start with a string of illegible and unpronounceable words: ‘Cpnkxratkp malkgnprum spkrkxxm’. 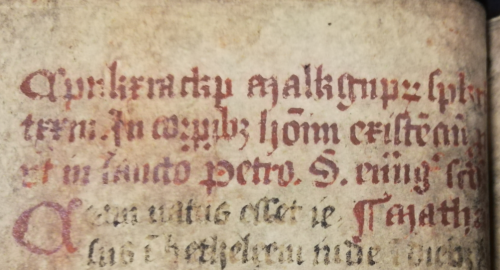 What to make of these strange words? The fact that they are written in red ink suggests that they are part of a title. So what does this manuscript contain? When we turn to the old catalogue of the Harleian manuscripts published in the year 1808, we find the manuscript described as a fragmentary Breviary–a common prayer book used in Christian liturgy–that was written in the 14th century.

But the 1808 catalogue must be incorrect. The manuscript does not contain any texts that one expects to find in a Breviary. Instead, the illegible words appear to be a form of secret writing. They employ a known encryption method in which vowels are replaced with their successive letters in the alphabet. With this method and some knowledge of the Latin language in mind, the title can be deciphered as: ‘Coniuratio malignorum spirituum’. In English, this means: ‘The Conjuration of Evil Spirits’. The manuscript is clearly not a fragmentary Breviary, but a complete copy of an exorcism manual that claims to describe the rituals used to drive out demons from possessed persons in St Peter’s Basilica in the Vatican, Rome. 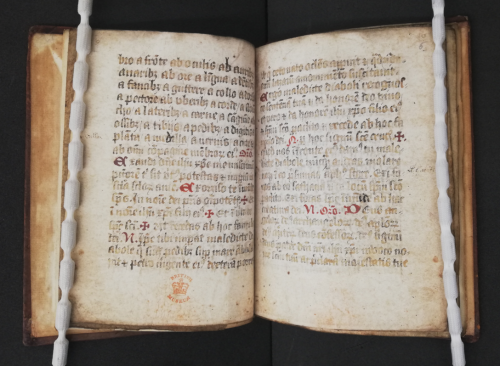 The Coniuratio malignorum spirituum survives in about 30 printed editions. All of these were published in Rome or Venice in the late 15th and early 16th century. Our Harley manuscript is almost certainly a handwritten copy of one of these printed books, and, based on its script, was copied around the year 1500. 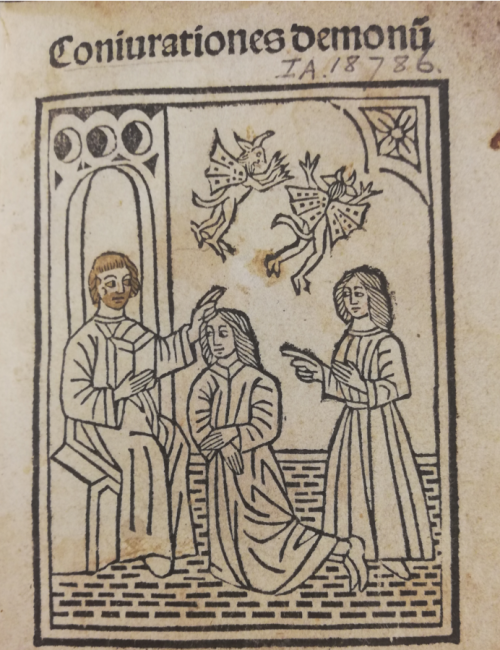 A woodcut print of a man exorcising demons from a printed copy of the Coniuratio malignorum spirituum (Rome: Stephan Plannck, about 1500): British Library, IA.18786

The Harley manuscript differs greatly from the printed versions in that it not only encrypts the text’s title, but also encrypts or abbreviates any further references to the act of conjuring and invoking demons throughout the manuscript. For example, ‘Coniuro te diabole’ (I conjure you Devil) has become ‘Cpnkxrp tf dibbplf’ in code, or ‘9o te diabole’ in abbreviated form, and ‘Memento lucifer’ (I hold Lucifer in mind) has become ‘Mfmfntp lxckffr’.

Since none of the Italian versions contains secret writing, the Harley manuscript was almost certainly encrypted by the scribe who copied it. But why did they do this? For an answer to this question, we need to look into the scribe’s background. An important clue to their identity can be found on the manuscript’s first page. This page is not part of the Coniuratio malignorum spirituum, but rather it contains a text in a different script that is both fragmentary and faded. With the aid of Ultraviolet light it can be identified as a royal pardon from King Henry VI to William Babington (d. 1453), who was abbot of the Benedictine abbey of Bury St Edmunds in Suffolk between 1446 and 1453. It may be the same pardon of debts owed to the Exchequer that Babington and his monastery are known to have received on 23 December 1451.

Importantly, the royal pardon is not a later addition but original to Harley MS 2874. Whoever made the manuscript cut a fragment from the pardon and used the blank parchment on its reverse side for writing the first page of the exorcism manual. This suggests that the scribe was quite possibly a monk of Bury St Edmunds, and certainly based in England. 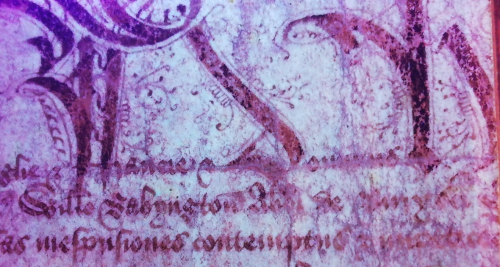 The English origin of the manuscript is significant because the historian Francis Young argues that there is no evidence for the popularity of Continental exorcism manuals in England at this time (A History of Exorcism in Catholic Christianity (2016), pp. 94-95). This means that the English scribe was probably unfamiliar with the genre of exorcism manuals. Perhaps this made them uneasy about the text’s contents, contributing to their decision to encrypt key parts of the manual. Moreover, they might have been particularly concerned about how future owners could use the manuscript. As Francis Young (p. 103) points out, the Coniuratio malignorum spirituum could be readily used for illicit magical rituals in which communication with demons is sought not to exorcise them but to control and employ them for one’s own purposes.

Its repeated use of the term ‘conjuration’ would have made the exorcism manual especially suitable for the dark arts, as in the instruction ‘I conjure you devil and unclean spirit’ (Coniuro te diabole et spiritus immunde).

The opening words of a conjuration in a printed copy of the Coniuratio malignorum spirituum (Rome: Stephan Plannck, about 1500): British Library, IA.18786

Conjurations are often found in magical texts that present formulas for invoking and commanding spirits. According to a 17th-century English magical treatise you should say the following:

‘I conjure and constrain you to fulfil my will in everything faithfully without hurt of my body or soul and to be ready at my call as often as I shall call you’. 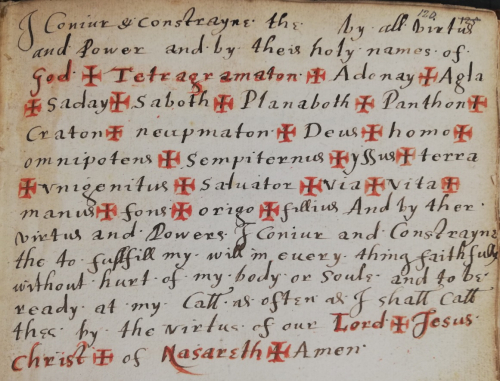 In using secret writing, the scribe may have wanted to limit the number of readers of the manuscript to a select and trusted few, perhaps a circle of monks at Bury St Edmunds. If that was their intention, then they seem to have been successful. Since the manuscript was acquired for the Harleian Library on 17 May 1715, cataloguers have not identified its contents, preventing magical practitioners from using it ever since.

This is just one of our many discoveries from the Harley cataloguing project. To read about some of the others, see our previous blogposts about a newly discovered manuscript from Byland Abbey and the lost miracles of St Wulfsige of Evesham. We will keep posting our findings, so keep a close eye on this blog!