If you have a modern medium-sized paperback (also known as B-format in the UK) or an A4-sized notebook at hand, you can check the page proportions of most modern printed material. That is, that the width of the page is between 65 and 70 percent of the height of the page. This relationship between height and width also holds true for most medieval manuscripts. But there are intriguing exceptions to this norm. For instance, there is a subset of medieval books that have remarkably tall and narrow dimensions.

One of the advantages of this unusual format is that it makes it easy to hold the book open with one hand and to turn the page with the other. This suggests that the text within these books may have been referenced while standing up or moving around. They are also often relatively small and portable, and some scholars have suggested that they were meant to hang from a belt or to be kept in a leather ‘holster’. Another theory is that they were easily packed in a saddlebag to take travelling. This is why they are now often called ‘holster books’ or ‘saddle books’. 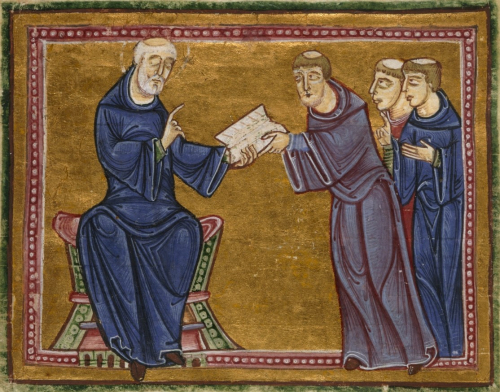 A miniature of St Benedict holding a book open with one hand and presenting it to three monks, from a copy of Regula Sancti Benedicti, Southern France, 2nd quarter of the 12th century: Add MS 16979, f. 21v

One late 10th-century English example of such a book is now the first part of a composite manuscript. It mainly contains the Rule of St Benedict (Regula Sancti Benedicti), by St Benedict of Nursia (b. c. 480, d. c. 550). The Rule is a set of guidelines for the spiritual and practical life of a monastic community and was the most important such rule in the early medieval period. Its influence was especially marked during the so-called Benedictine reform movement in England during the second half of the 10th century. The reformers, with the support of King Edgar (r. 959–975), aimed to reinstate strict monasticism following the Rule of St Benedict. In reformed houses, a passage of the Rule was read aloud every day.

This copy is around 230 mm tall and only around 95 mm wide. The proportions of this book were discussed by John Lowden in this virtual exhibition, in which he suggested that it might have been made to fit a recycled ivory plaque used to decorate the book cover. The large writing and short lines of this copy of the Rule would also have assisted with the communal daily readings.

Books used in the liturgy were also quite often made in this format. One example is the Noyon Sacramentary, a book containing the prayers and texts needed to perform Mass and other ceremonies made for the use of Noyon Cathedral in the late 10th century. It has been called a ‘saddle book’ since it might have been meant for use by the bishop of Noyon when he needed to travel to consecrate churches throughout the bishopric. You can read more about its decorated initials and their connections to earlier 9th-century manuscripts in a previous blogpost.

Many tall and narrow books from the late 10th and 12th centuries contain works by classical authors, for instance this copy of the Aeneid by the Roman poet Virgil (b. 70 BC, d. 19 BC) made in the late 12th or early 13th century. Considered Virgil’s masterpiece, the Aeneid soon became a standard text in Latin education and it continued to be used to teach Latin grammar and rhetoric throughout the Middle Ages. It is possible that this book was used by a teacher who needed it constantly at hand, to read aloud from and refer back to, while moving through a classroom setting. Another possible reason for this format specifically for classical poetry is that it fits the generally short lines of verse, such as the hexameter of Latin epic poetry.

It is even more likely that another 12th-century manuscript, which was digitised as part of The Polonsky Foundation England and France Project, was used in a classroom. This book contains the Thebaid by the Roman poet Statius, another Latin epic poem that was a popular text of the medieval school curriculum. As seen on this page, with the end of Book I and beginning of Book II, the layout of its tall and narrow pages left generous outer and lower margins. This was evidently necessary, considering the many marginal and interlinear glosses and annotations that were added subsequently, in several layers and by different hands. This is a sign of its use in a scholarly teaching context. 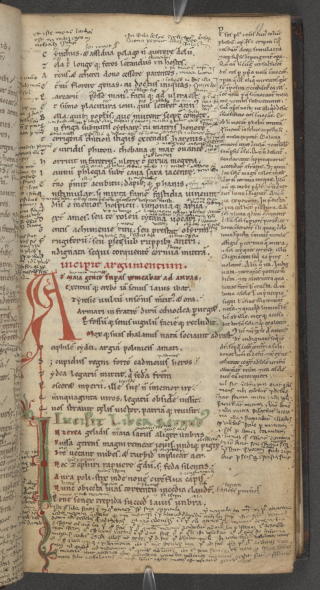 If you want to learn more about the medieval engagement with ancient Greek and Roman works and authors, check out the article on The classical past on the Polonsky Medieval England and France 700-1200 project website.