The secret of a silver clasp

The British Library is home to a huge array of beautiful bookbindings: from velvet and sheepskin chemises, to bejewelled covers, gold-tooled and patterned leather, and ivory friezes. Clasped bindings are a particular favourite of mine. This binding method is intended to protect a book from the effects of dust and light by an element (typically leather or metal) that secures its upper and lower covers. Clasped bindings have been in use for hundreds of years and many beautiful and elaborate examples survive from the Middle Ages.

One manuscript housed at the Library has a particularly special clasped binding. Attached to its green and gold-tooled covers, its small silver clasp is shaped in the form of a lion, with a coiled tail and a curly mane, and its right forepaw raised. 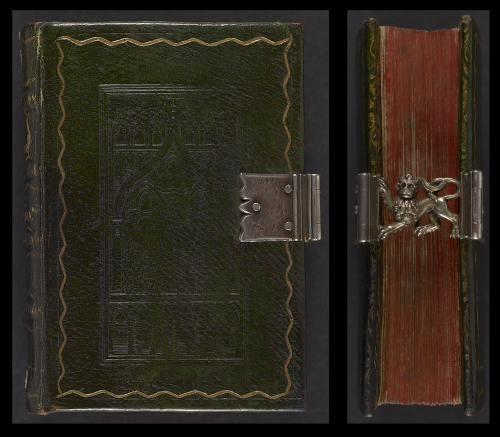 The upper cover and fore-edge of an early 16th-century Book of Hours, with its silver lion-shaped clasp: Egerton MS 1147 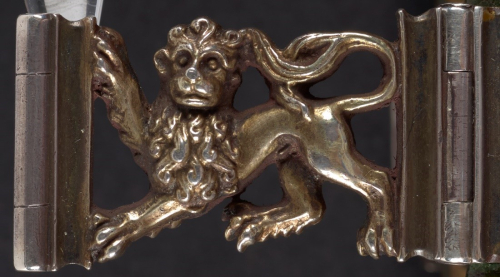 The lion alone is a beautiful addition to the manuscript, but it also hides a tantalising secret. On the reverse of the clasp, enclosed within the space directly behind the lion’s head and upper body, an artist has added a delicate engraving. It depicts a female figure, draped in robes, with long flowing hair. Who is this mysterious woman? What is her connection to the silver lion, and why has her portrait been added to the back? 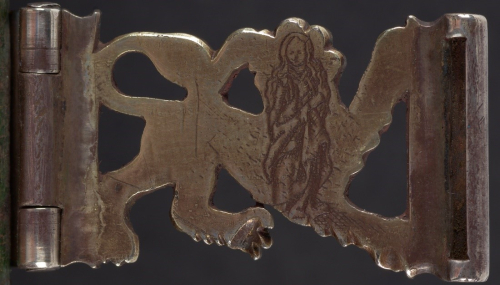 The reverse of the clasp, showing an engraving of a female figure: Egerton MS 1147, clasp

Possible answers to these questions can be found within the pages of the manuscript itself (Egerton MS 1147), recently digitised and available to view in full on our Digitised Manuscripts site. The volume is a Book of Hours — a type of devotional book that was very popular during the Middle Ages — written and illuminated in the Flemish city of Bruges between 1500 and 1515. It contains numerous beautiful illustrations and decorative borders that accompany its calendar and collection of prayers and liturgical and devotional readings. 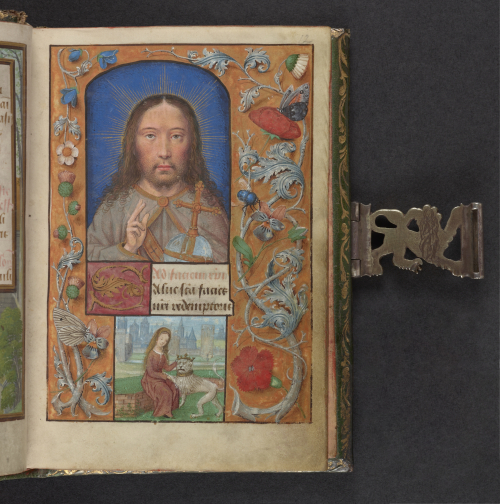 Christ as Salvator Mundi, at the opening of the Latin Prayer to the Holy Face, ‘Salva sancta facies’: Egerton MS 1147, f. 12r (Image by Isabelle Reynolds-Logue)

One such illustration appears in the lower margin of the opening page of the Latin ‘Salva sancta facies’, or Prayer to the Holy Face. The image shows a woman sitting in an enclosed garden, the outline of a cityscape with numerous turrets and crenellations visible in the background. Before her appears a lion with silver fur wearing a golden crown and collar, its paw outstretched to the woman’s hand. In short, the image displays unmistakeable parallels to the design of the lion-shaped clasp attached to the book’s covers. 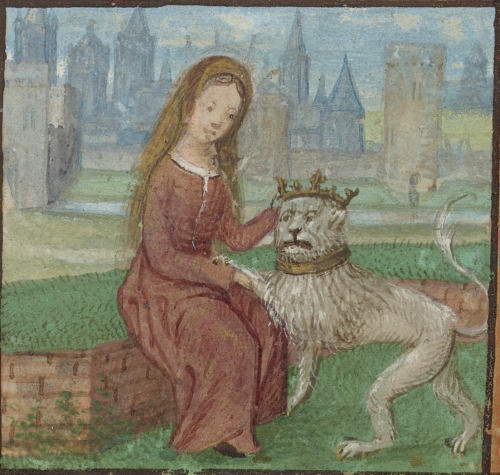 The elusive female subject of both the clasp and the marginal illustration can be identified with a symbolic medieval figure known as the ‘Maid of Ghent’. Her story originates in a 14th-century Middle Dutch poem, written by the Flemish author Baudouin van der Lore. It was written at a time when the city of Ghent (in modern-day Belgium) was threatened by the invading army of Louis II, Count of Flanders. Baudouin’s poem details a vision of the Maid stranded in a wood, and relates how she is protected from the machinations of an evil prince by Christ who appears to her in the form of a lion. The poem’s symbolism evidently resonated with the citizens of Ghent and their struggle, and by the beginning of the 15th century, the Maid and her lion had been adopted as the emblem of the city itself.

Numerous examples of the ‘Maid of Ghent’ appear in surviving medieval metalwork, armorial plates and illuminated books produced in the city. The most notable of these is a large military standard, probably painted by a female Flemish artist called Agnes van den Bossche — one of only a few known women artisans from this time — some 40 years before our Book of Hours was made. The banner adopts the same design as the clasp and the illustration above: the Maid holding the crowned lion’s outstretched paw. The lion now appears in an almost burnished gold, but microscopic analysis of the banner and its pigments has revealed it would have originally been silver.

A military standard, depicting the ‘Maid of Ghent’ and her lion, probably painted by Agnes van der Bossche, 1481–1482: courtesy of STAM Museum Ghent

Our Book of Hours is known to have originated in the city of Bruges, where it was worked on by a succession of Flemish artists, but the recurring presence of the figure of the Maid and her lion suggests it may have been intended for a Ghentish owner, for whom this emblem would have had special significance. Moreover, the book remained in Ghent for many centuries after its production. A marginal inscription on one page displays the letters ‘IR’ linked by a lover’s knot: the monogram of a renowned bookbinder, Jan Ryckaert (b. 1516, d. 1573) whose workshop was based in the city. Eventually, it had become part of the collection of the Ghentish bibliophile Pierre Joseph Versturme-Roegiers (b. 1777, d. 1846). 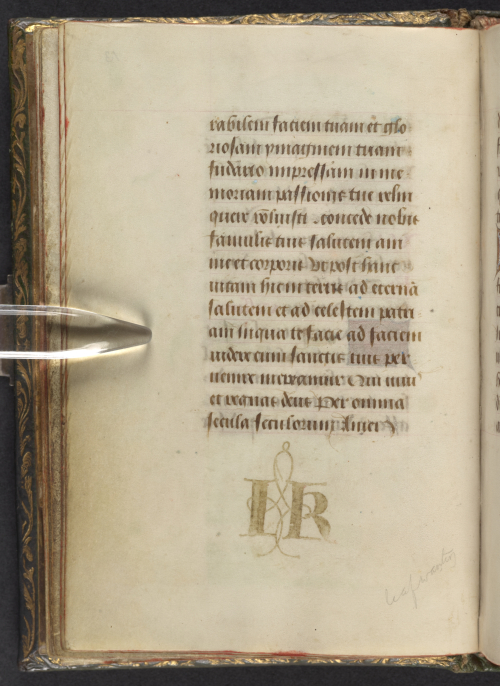