Highlights from our Gold exhibition

Our new exhibition Gold opens this week. It explores the use of gold in books and documents across twenty countries, seventeen languages, and five major world religions. We show how people have used gold to communicate profound value, both worldly and spiritual, across cultures and time periods. All 50 of the objects in the exhibition are star items. But to whet your appetite, here are some of our highlights:

The exhibition begins with three sacred texts from different world religions written entirely in gold. Writing in gold ink was expensive and required great scribal skill, so entire books written in gold are very rare. One of these is the Harley Golden Gospels, made at the court of Charlemagne, who ruled over the majority of western and central Europe as Holy Roman Emperor at the beginning of the 8th century. In addition to the elegant gold script, every text page has a different elaborate gold border. 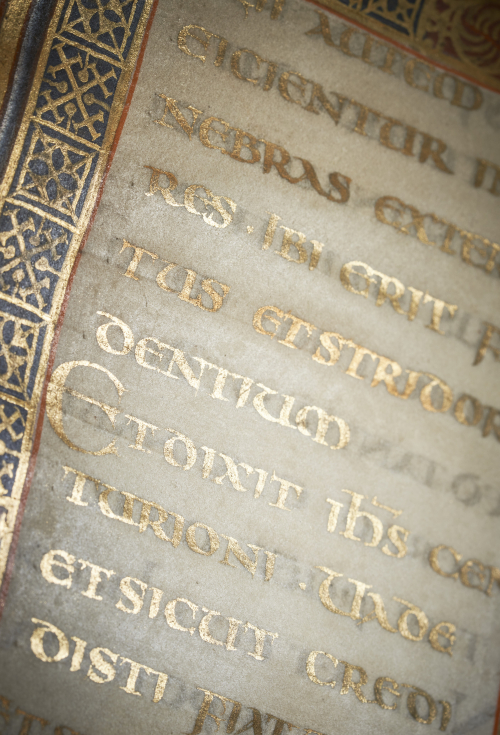 Sharing the case with the Gospels is another sacred manuscript written entirely in gold, one of the volumes of Sultan Baybars’ Qur’an. This splendid manuscript is named after the ruler who commissioned it, Rukn al-Din Baybars al-Jashnagir, who later became the Mamluk Sultan Baybars II. The Mamluk Sultanate was the greatest Islamic empire of the Middle Ages, occupying lands from Egypt to Syria and across the Red Sea. This seven-volume Qur’an was copied in Cairo by the calligrapher Muhammad ibn al-Wahid, and the golden rosettes and marginal ornaments were the work of a team of artists headed by the master illuminator, Abu Bakr, also known as Sandal. 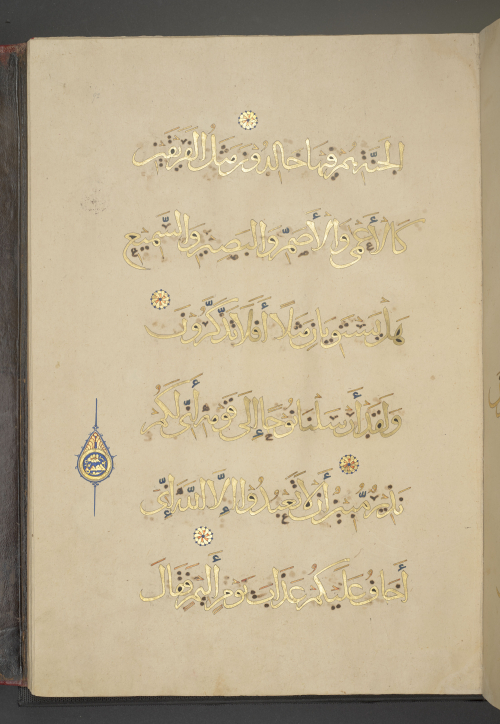 There is a long tradition in South Asia of using durable metals for the recording of important legal and political texts. This treaty, written in Malayalam, details a defensive alliance between the powerful Zamorin or ruler of Calicut, on the southern Indian Malabar coast, and the Dutch. It is inscribed in eight lines on a strip of gold over two metres long. 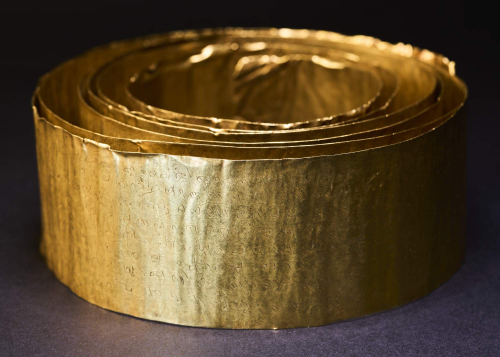 Treaty between Calicut and the Dutch, India, 1691: MS Malayalam 12

Dating to the 5th–6th centuries, these two inscribed gold plates are amongst the oldest items in the exhibition. The plates start with a well-known chant, Ye dhamma, which refers to the core teachings of Buddhism: suffering, what causes it, and how to end it. They were originally rolled and placed at the base of a stupa, symbolising the presence of the Buddha and endowing the monument with sacredness. 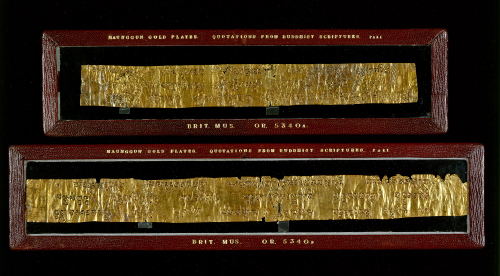 Gold was also used for illuminating pictures in luxury manuscripts. The Queen Mary Psalter is one of the most extensively illustrated biblical manuscripts ever produced, containing over 1000 images. Many of its beautiful illuminations are set against backgrounds of gold leaf decorated with intricate incised and painted patterns. The manuscript is known after Queen Mary I, to whom it was presented in the 16th century after a customs official prevented its export from England. 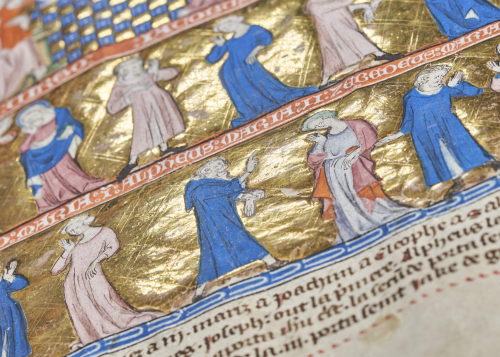 The Benedictional of Æthelwold

When St Æthelwold, bishop of Winchester, commissioned this book, he specified that it should be ‘well adorned and filled with various figures decorated with manifold beautiful colours and with gold’. True to Æthelwold’s instruction, the manuscript is richly decorated with images of biblical scenes and saints, such as St Æthelthryth of Ely here, clothed in gold and set in an opulent golden frame. 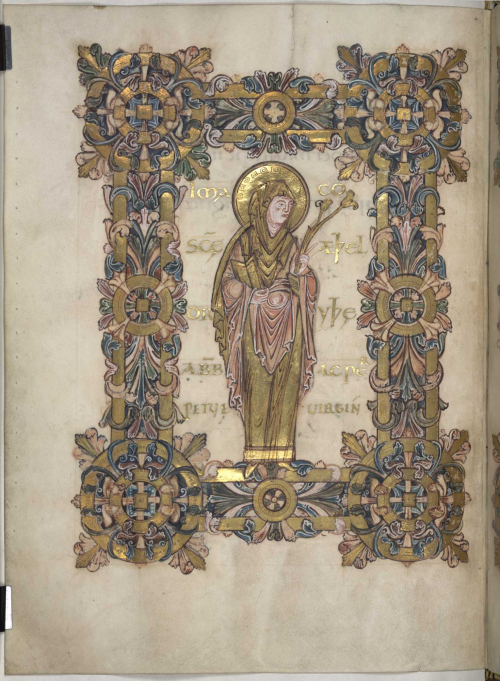 Haggadah is the text for Passover Eve telling the story of the Jews’ exodus from slavery in Egypt. Because of the tooled gold-leaf backgrounds of the illustrations, this lavish manuscript is known as the Golden Haggadah. It contains 14 full pages devoted to scenes from Genesis and Exodus. For example, in the top left Joseph dreams of his brothers’ sheaves of wheat bowing to his upright central sheaf, all set against the intricate cross-hatched golden background. 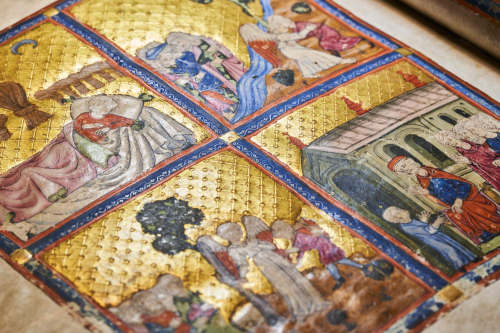 The Psalter of Queen Melisende

Another manuscript that features impressive gold illumination is the Melisende Psalter. It was probably made for Queen Melisende (died 1161), who reigned in the Crusader kingdom of Jerusalem jointly with her husband Fulk of Anjou, and then with her son. Unusually, the initial ‘B’ (for Beatus, meaning blessed) at the beginning of the first Psalm is decorated entirely in gold with black line drawing. 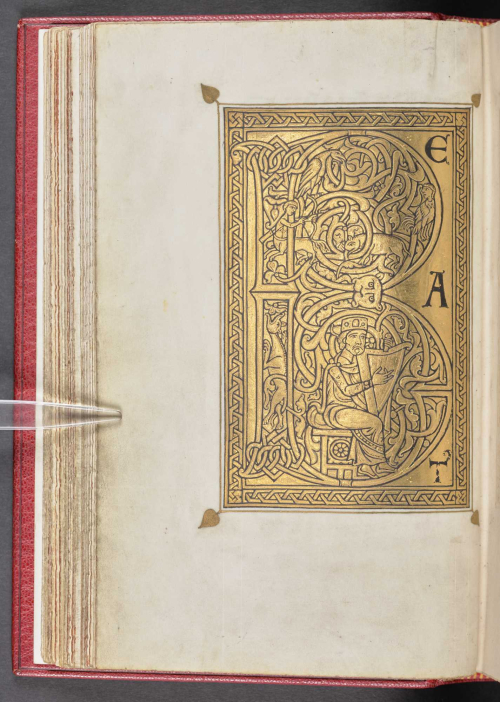 These amazing manuscripts are only a small sample of the fifty golden books and documents that you can see on display in the exhibition. We hope you are as excited for the opening as we are!

Our Gold exhibition is open from Friday 20 May - Sunday 2 October 2022. You can read more about the exhibition in our previous blogpost and you can book your tickets online now. An accompanying book Gold: Spectacular Manuscripts from Around the World is available from the British Library shop.