The Tudors in Liverpool

A major new exhibition, The Tudors: Passion, Power and Politics, is now on display at the Walker Art Gallery in Liverpool. It brings together a significant number of the most famous Tudor portraits from the National Portrait Gallery, paintings from the Walker Art Gallery’s own collection and Tudor objects from around the UK. The exhibition presents the story of the five Tudor monarchs — Henry VII, Henry VIII, Edward VI, Mary and Elizabeth — and explores life at the Tudor court, its cultural influences, family ties and political connections, as well as considering the Tudor dynasty’s legacy. The British Library is delighted to have loaned the Westminster Tournament Challenge to this show, the only manuscript of its kind known to survive in England. 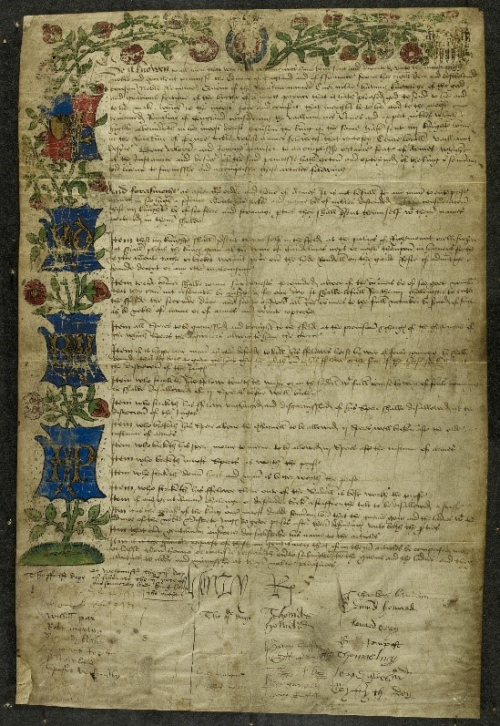 On 1 January 1511, Henry VIII’s first wife, Katherine of Aragon, gave birth to a son. London was filled with celebrations: guns were fired from the Tower of London and the city bells were rung. Beacons were lit across the country to announce the royal birth. Henry VIII himself proclaimed that a two-day Burgundian-style tournament be held in Katherine’s honour at Westminster.

The Westminster Tournament Challenge was issued on 12 February 1511 and explains the tournament’s over-arching allegorical theme.  The text begins by introducing four knights or ‘challengers’ sent by Queen ‘Noble Renown’ of the kingdom of ‘Noble Heart’ to joust in England against all ‘comers’ or respondents in honour of the ‘birth of a young prince’. Henry VIII played the star role of ‘Ceure Loyall’ — Sir Loyal Heart — and wore a costume covered in the gold letters ‘K’ and ‘H’. Leading courtiers Sir Thomas Knyvet, Sir William Courtenay and Sir Edward Neville rode as ‘Vailliaunt Desyre’, ‘Bone Voloyr’ and ‘Joyous Panser’ respectively.

The four knights entered the tiltyard on a magnificent pageant chariot decorated as a forest with a golden castle in the centre and pulled by a golden lion and a silver antelope. Their shields, which were presented to Katherine on the first day of the tournament, are shown in the left-hand margin of the Tournament Challenge, each bearing the initials of the knights’ allegorical sobriquets and surrounded by roses and pomegranates to represent Henry and Katherine. The tournament rules are set out in the middle section of the document. These would have been read aloud by heralds, before being signed by the four challengers and all the respondents, who, in reality, were leading courtiers and Henry’s tiltyard companions. Henry VIII’s large signature can be seen in the centre of the lower portion of the Tournament Challenge alongside other members of his court, including Charles Brandon, Thomas Howard and Thomas Boleyn.

Section of the Westminster Tournament Roll showing Henry VIII running a course as Sir Ceure Loyall, as Katherine of Aragon watches from the pavilion, 1511: the College of Arms, London

According to contemporary accounts, the tournament was the most lavish of Henry’s reign and a great spectacle of Tudor pageantry. The whole occasion was commemorated in the illustrated Westminster Tournament Roll preserved at the College of Arms, London. This impressive document is also displayed in the exhibition, presenting visitors with a rare opportunity to view the Tournament Challenge and Roll side by side.

Tragically, Prince Henry died just days after the tournament was held, and was buried in Westminster Abbey. Katherine was stricken with grief, but Henry seemed less concerned. Both he and his wife were still young and the possibility of another heir did not seem remote. The king threw himself into preparing for war against France. He could not have known at this stage that Katherine would never provide him with a male heir. 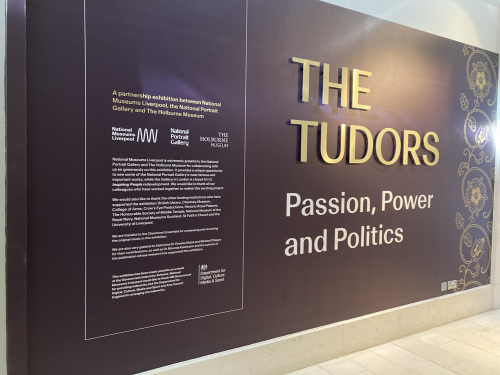 The Tudors: Passion, Power and Politics runs at Walker Art Gallery, Liverpool from 21 May to 29 August 2022.