‘Gold is gold is gold’ it is said, but the Library’s current Gold exhibition shows that this is not the whole story. In book bindings, it appears as paint, lacquer, powder and leaf and was (and is) used all over the world. The more pure (and expensive) the metal, the less likely it is to tarnish. Light is the catalyst which brings such a decorated binding to life. The covers glow in the restricted light levels of a gallery display case today, just as they once did in the candlelight of the medieval royal court, on a church lectern or in a scholar’s study. 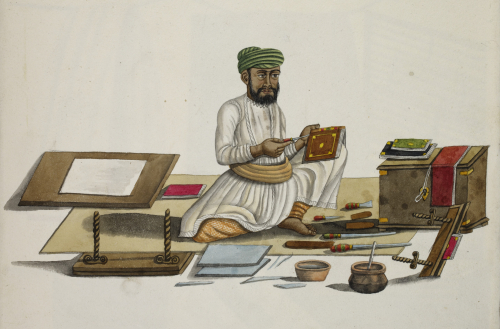 There are many reasons why such cost and effort should be expended but a celebration of the wealth and discernment of the owner, the skill of the craftsman and honouring the text or manuscript contained within surely played a part. Bound books which were destined to be gifts were frequently ornamented with gold.

Arguably, the technique that creates the most astonishing result is tooling in gold. This is achieved by impressing a heated engraved brass tool into the surface of leather through a thin layer of gold. The skill needed is considerable, as I learned during my first attempt. The temperature was far too hot which resulted in me tooling through the leather into the workbench beneath! To avoid expensive errors like this, apprentice bookbinders were required to train for many years (usually seven in England). 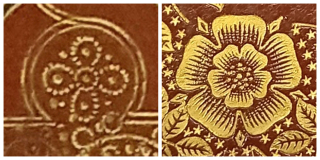 An enlarged pointillé motif popularised by the Maître Doreur, and a solid flower motif used by Cobden-Sanderson

One of the spectacular gold-tooled bindings in the exhibition is by the 17th-century French binder known as the Maître Doreur (C.14.c.12). In some countries, practitioners specialised either in the structure of the book or on the decoration. In France the term for the latter was ‘doreur’ (which references ‘or’, the French for gold). The fact that this binder was given the epithet Maître Doreur (i.e. Master gold tooler) indicates the level of his expertise. The delicately tooled motifs comprising dots and coloured onlays repeat in a hypnotic fashion until the entire glowing surface is covered. This use of tiny dots of gold leaf to form a pattern is known as pointillé technique. It is hard to calculate how long such work took. It would be many hours, if not days. Another beautiful example of gold-tooling in the exhibition is an Arts and Crafts binding by Thomas James Cobden-Sanderson (1840–1922), who may be considered the ‘Maître Doreur’ of the late 19th century (C.68.h.17). Gold was the key to his decorative schemes on goatskin bindings, but solid motifs were preferred to the pointillé favoured by the earlier binder. Lettering in gold was particularly important. Only four tools comprise this all over pattern.

Gold was often the first choice of decoration for a binding intended to be a gift, as this was to Cobden-Sanderson’s daughter, Stella Gabrielle. The binder wrote:

‘This book, Stella, I was binding when you were born, and being one of the noblest books I know I covered it with such glory as I could of roses and of stars and set your name in the midst and gave it to you.’

What a way to mark one’s birth day! 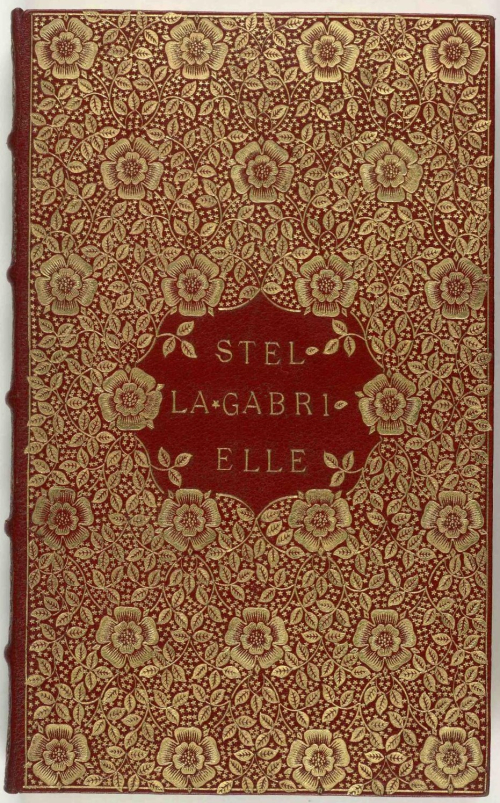 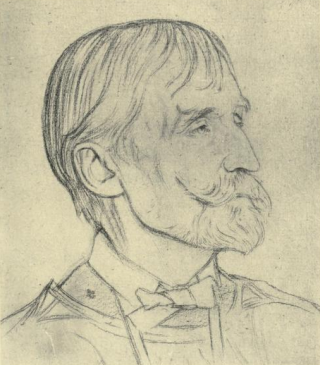 Cobden-Sanderson’s apprentice, Douglas Cockerell taught at London County Council Central School of Arts and Crafts. He passed on his expertise to promising younger craftsmen including the founders of the Sangsorksi and Sutcliffe workshop (established in 1901), Francis Sangorski (1875–1912) and George Sutcliffe (1878–1943). They created the beautiful jewelled binding on a copy of Spenser’s Epithalamion and Amoretti (C.109.p.20) which appears in the exhibition. 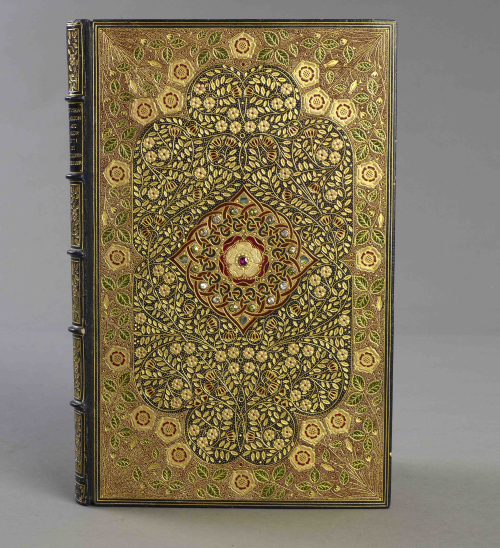 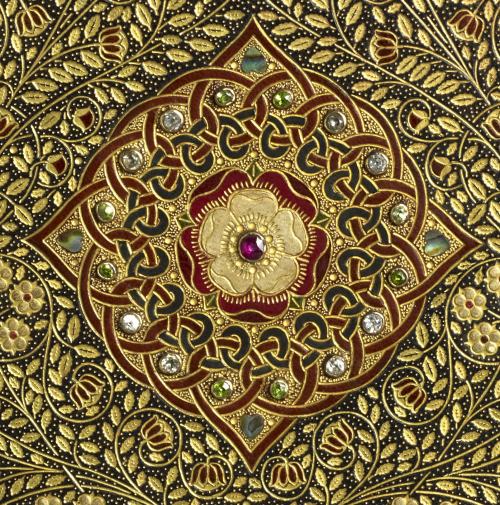 Enlargement of the binding by Sangorski and Sutcliffe; Edmund Spenser, Epithalamion and Amoretti (London, 1903): C.109.p.20, detail

In the Middle Ages, ‘treasure bindings' on religious manuscripts sometimes incorporated jewels with lustrous precious metals (you can read about them in our article on medieval bindings). Sangorski and Sutcliffe revived this style but used it on secular texts, which were frequently poetic or exotic. Gold and gems make ideal partners on a surface due to the reflective nature of both materials, as can be seen on the binding on display.

The success of the trend inspired the creation of a stupendous binding on an engraved copy of the Rubaiyat of Omar Khayyam featuring over a thousand jewels and a hundred square feet of gold leaf. The latter became perhaps the most famous bookbinding in the world after it was lost on the Titanic and a recreation was destroyed in the Blitz. A third version is in the British Library. 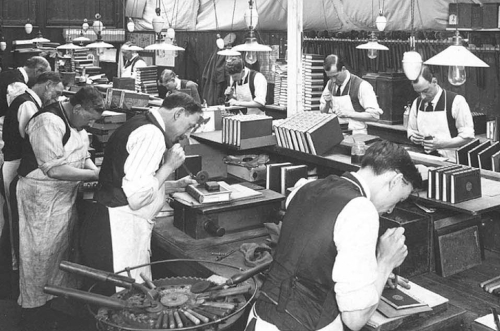 Gold can contribute to the all-over splendour of a binding in other ways including metal ‘furniture’ (e.g. bosses and corner-pieces) and gilded edges on text blocks. Gilding protects the contents of the book from moisture and dust.

It can be gauffered, i.e. further decorated using tools which catch the light. An article in The Bookbinder of 1888 notes that 'a gilt edge is as necessary to a well-bound book as the gold chain is to an alderman's robes.' The British Library’s Gold exhibition runs until 2 October 2022. You can read more about the exhibition in our previous blogpost and you can book tickets online now. An accompanying book Gold: Spectacular Manuscripts from Around the World is available from the British Library shop.