Every one of the glistening treasures in the Gold exhibition will startle and impress our visitors. But there are some more than others that may cause them to catch their breath, especially at the dates on the labels. The Harley Golden Gospels is one of these, a magnificent imperial book, written entirely in gold at the court of the Holy Roman Emperor Charlemagne (r. 800-814), perhaps for emperor himself. Amazingly, this treasured book has survived in near-perfect condition for over 1,200 years.

The court of Charlemagne was Christian while modelling itself on the splendours of ancient Rome. In the decoration of the Gospels, evocations of the Roman past are combined with Christian images and symbolism. Though only one page can be displayed in our exhibition, images of every page are online and here we show a selection of the most beautiful among them. 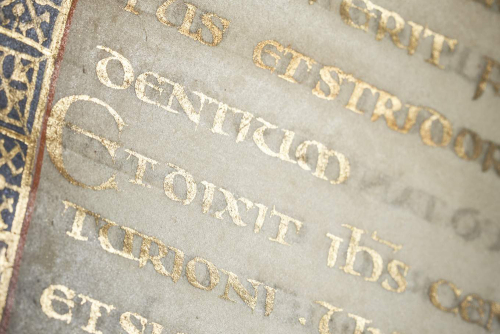 While the Harley Golden Gospels is often exhibited for its picture pages, the page on display in the Gold exhibition shows off the manuscript's remarkable golden script. It was very unusual for a manuscript to be written entirely in gold, so this is an outstanding display of wealth and scribal skill. Every text page is also ornamented with a different patterned frame, beautifully painted in colours and gold. This amount of attention lavished on the Gospel text was probably intended to show that it represented the word of God in physical form, with its radiance emphasising the value of divine wisdom. 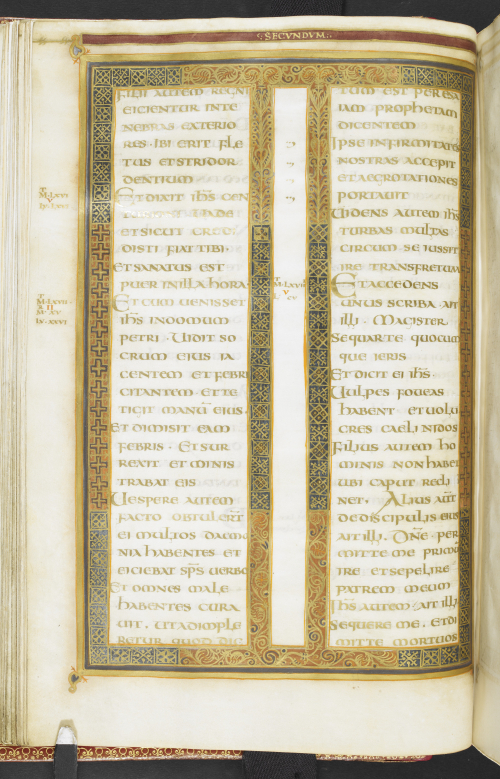 Following the biblical prefaces at the beginning of the volume there are eleven pages of canon tables, lists of parallel and unique passages in the Gospels. The lists of Roman numerals are set among classical columns and arches decorated with rich patterning and animals. They may evoke the Roman porphyry columns in Charlemagne’s palace chapel at Aachen. Canon tables with decorated gold columns and symbols of the four Evangelists: an angel, a lion, an ox and an eagle: Harley MS 2788, f. 6v

The title preceding the Gospels is written in gold and silver on a large red medallion surrounded by geometric designs, with the space around it filled by bright turquoise peacocks and colourful roosters. 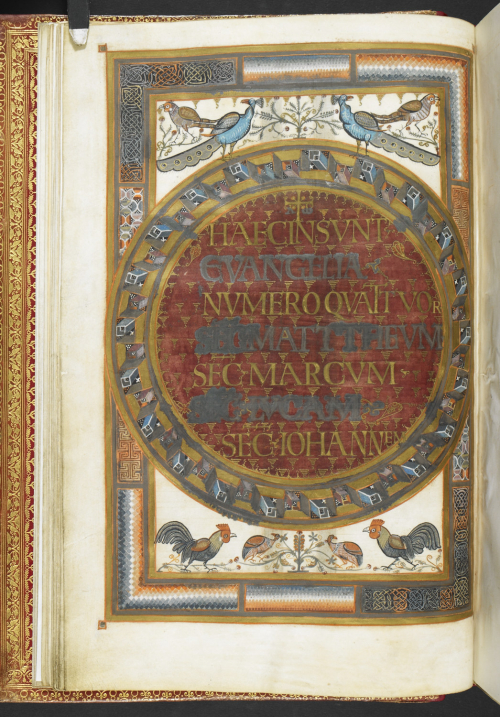 Each of the four Gospels is preceded by a full-page portrait of the evangelist, the authors of the Gospels Matthew, Mark, Luke and John. They are each seated on a throne that resembles in shape the throne of Charlemagne at Aachen, and are surrounded by an imperial setting of columns and arches. On the facing page is an elaborate initial and the opening words of the Gospel in large gold capitals

At the beginning of his Gospel, Matthew points to an open book, with an angel above. The opposite page contains the opening words of his Gospel in gold capitals; the large ‘L’ of ‘Liber generationis’ (The book of the generation) is topped with two lion-like creatures in a medallion. 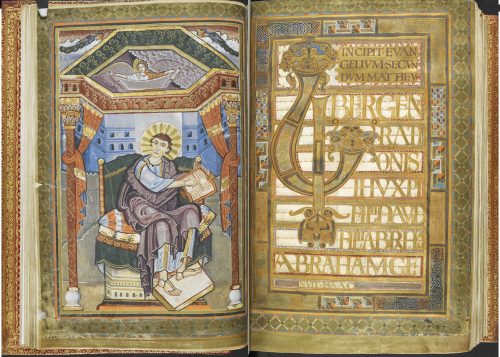 Mark dips his pen in an inkwell while holding an open book. The lion above holds an unfurled scroll with the opening words of his Gospel. On the opposite page the first letter ‘I’ of ‘Initium’ (The beginning) has interlace patterns and contains a roundel with a bust of Christ. The name ‘Marcum’ (Mark) appears in red in the central column among the gold lettering. 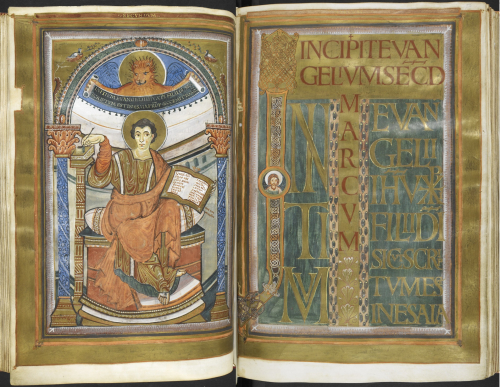 The opening page of Luke’s Gospel has a colour palette dominated by warm reds and ochres. Above him, a white ox with wings holds an open book. On the facing page, an angel announces the future birth of John the Baptist to Zacharias, his father, who is at an altar in a round Temple. On either side are roundels of Elizabeth, his wife, and her cousin Mary, mothers of John the Baptist and Jesus Christ. 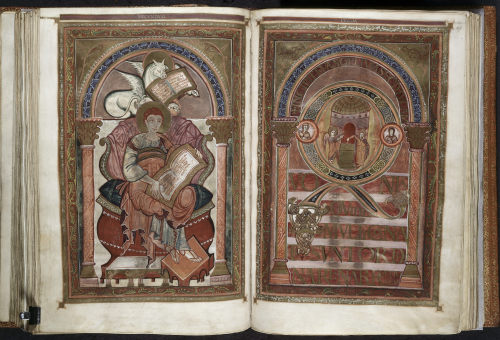 The evangelist John is a more solid figure than Luke and faces straight out of the page. He is shown with his symbol of a golden eagle, and he, like Mark, dips his pen in an ink well. On the facing page, John the Baptist and two disciples below all point upwards to the Lamb of God, illustrating a passage from John’s Gospel (1: 36-37). The purple inscribed with gold capitals on this page further emphasises the imperial connotations of this work, since purple was especially associated with the Roman emperors (you can read more about gold and purple manuscripts in a previous blogpost). 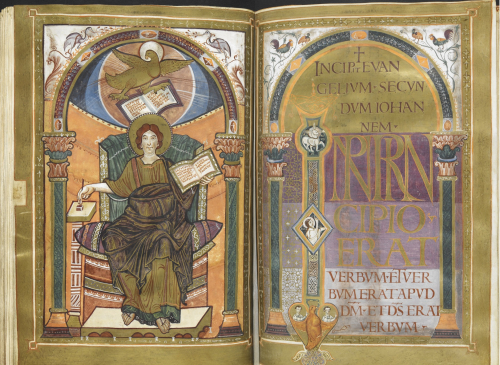 With such a wealth of shining decorations, this splendid manuscript certainly earns its name as the Harley Golden Gospels.

The British Library’s Gold exhibition runs until 2 October 2022. You can read more about the exhibition in our previous blogpost and you can book tickets online now. An accompanying book Gold: Spectacular Manuscripts from Around the World is available from the British Library shop.