The British Library has loaned the Lindisfarne Gospels to the Laing Art Gallery in Newcastle upon Tyne, for an exhibition that runs until 3 December 2022. 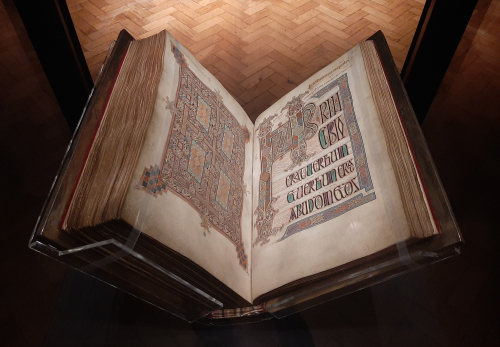 The Lindisfarne Gospels on display in the Laing Art Gallery

The manuscript is displayed to show the spectacular decoration at the beginning of the Gospel of John. On the left-hand side is one of the book’s five densely painted carpet pages, all based on the shape of a cross. On this page, the decoration is centred on an equal-armed cross, filled with yellow interlace. The grid of geometric panels on the page is surrounded by a dense network of interlaced birds painted in pink, red, blue and yellow, set against a black ground. The bright green background of the four rectangular panels contrasts with the palette of the rest of the page. 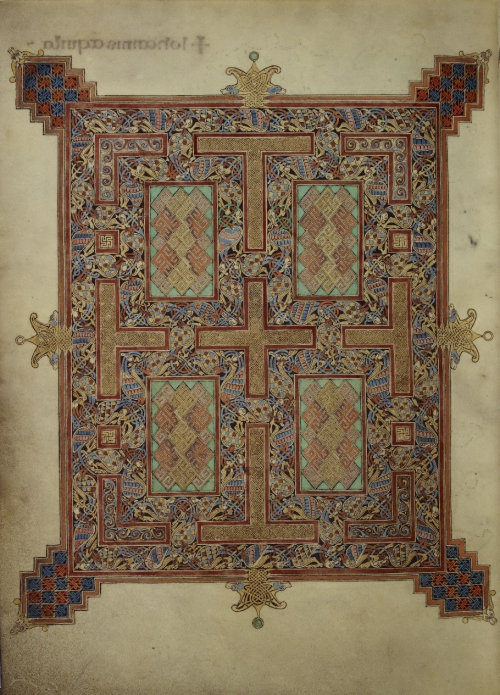 On the facing page are the opening words of the Gospel of John in Latin, ‘In principio erat verbum et verbum erat apud deum…’ (‘In the beginning was the Word, and the Word was with God…’). The first three letters of the text form an intricately elaborated ‘INP’ monogram which dominates the page. Some of the letters on this page end in a spiral, interlace, or the head of a bird, but the letter ‘C’ in principio ends in the head of a man with long blond hair. Other than the portraits of the four evangelists, this is the only human depicted in the manuscript. 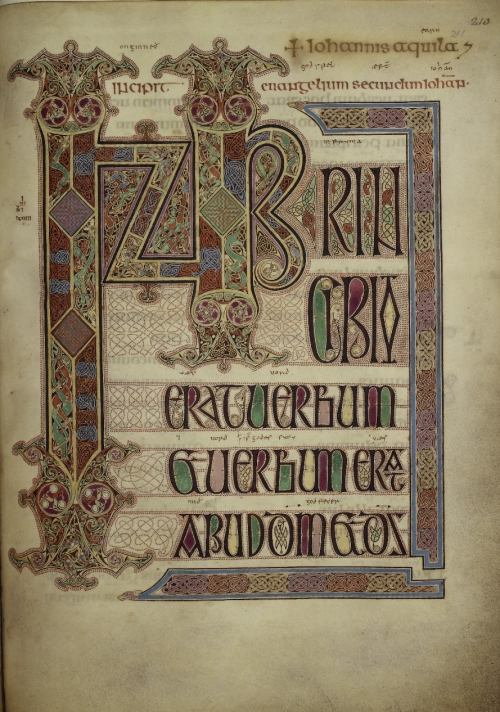 The beginning of the Gospel of John in the Lindisfarne Gospels: Cotton MS Nero D IV, f. 211r

You can read more about the Lindisfarne Gospels and see full digitised coverage of the whole manuscript on our website.

The British Library has also loaned three other manuscripts to the exhibition, including the St Cuthbert Gospel (Add MS 89000), which the Library acquired in 2012 with the support of many donors including the National Heritage Memorial Fund and the Art Fund. It is displayed in Newcastle alongside the pectoral cross from the Staffordshire Hoard which was discovered in 2009 and is on loan from Birmingham Museums Trust and the Potteries Museum and Art Gallery, Stoke-on-Trent. The upper cover of the St Cuthbert Gospel: Add MS 89000

Also on loan from the British Library to the exhibition in Newcastle are the Tiberius Bede, containing Bede’s Ecclesiastical History of the English People (Cotton MS Tiberius C II) and an Irish pocket gospel-book (Add MS 40618) which is displayed alongside the Mac Durnan Gospels on loan from Lambeth Palace Library. 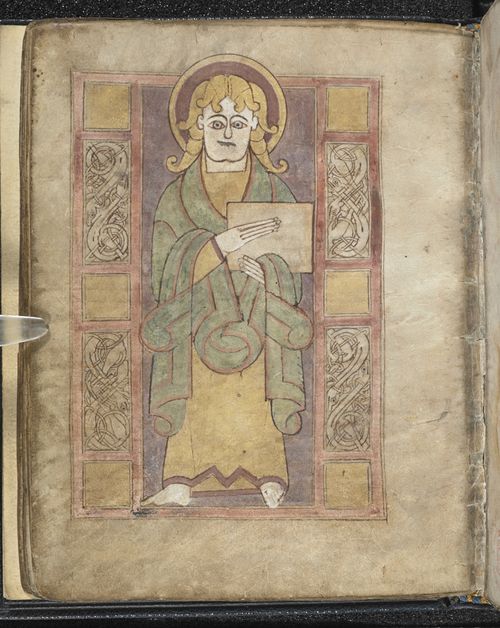 The loan of the Lindisfarne Gospels to the Laing Art Gallery marks the sixth loan of the manuscript and the fifth time that it has been on exhibition in the North East of England. It has been displayed twice before in the Laing Art Gallery in Newcastle, in 1996 in the exhibition, ‘Treasures from the Lost Kingdom of Northumbria’, and again in 2000 to mark the millennium. It was also displayed in Durham Cathedral in 1987 as part of the celebrations for the 1300th anniversary of the death of St Cuthbert, and in Durham University’s Palace Green Library in 2013. 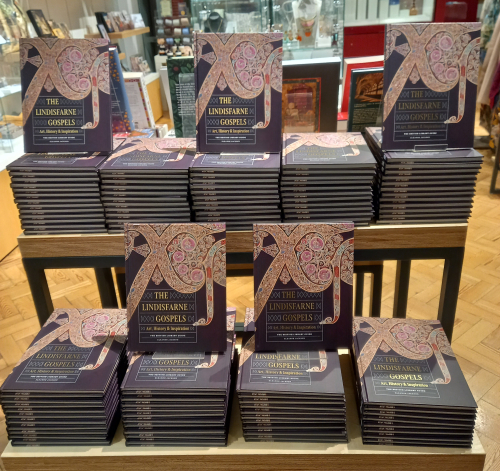 The Laing Art Gallery is also showing a short film which Turner-prize-winning artist Jeremy Deller has produced in response to the loan of the Lindisfarne Gospels to Newcastle. The film, entitled ‘The Deliverers’, is free to view at the Gallery this autumn.

Downstairs, in the Gallery’s Marble Hall, is the display, These Are Our Treasures. This free exhibition, featuring treasured objects belonging to people in the North East of England, is the result of a project led by artist Ruth Ewan. Each treasured object is displayed alongside an account of its story, as told by its owner. The Gallery is holding a series of talks during the Lindisfarne Gospels exhibition, and other organisations across the North East are running a programme of events. This programme includes Illuminated Sheep in Northumberland, and an exhibition, Sharing Stories, at Newcastle City Library which focuses on modern children’s stories, and includes loans from the British Library and Seven Stories in Newcastle.

The Lindisfarne Gospels exhibition at the Laing Art Gallery in Newcastle is open daily from 10.00am to 7.30pm until 3 December 2022, and tickets are available to book online.