A new exhibition The Tudors: Art and Majesty in Renaissance England has recently opened at the Metropolitan Museum of Art in New York City. The exhibition showcases the artistic legacy of the Tudors and reveals how England became a thriving home for the arts as the Tudor monarchs increasingly used imagery to legitimise and define the dynasty.

Among the magnificent array of paintings, tapestries and sculptures, visitors will have the opportunity to see five items from the British Library, including Henry VIII’s personal Psalter, which has been loaned to the United States for the first time. 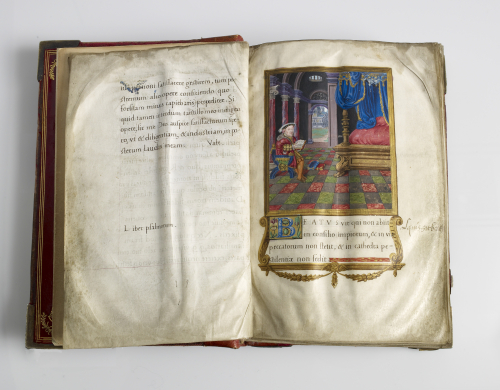 The Psalter was commissioned by the King himself in 1540 and written and illustrated for him by Jean Mallard, a French scribe and illuminator. It is a lavish production and is still in its original binding, which although quite threadbare, retains traces of deep red velvet. The Psalms are written in an elegant, humanist script and accompanied by exquisitely decorated initials showing birds, insects, fruit, flowers and foliage.

But the Psalter’s true significance lies in its main illustrations, four of which depict Henry, and its annotations written by the King. Taken together, they demonstrate that by the 1540s Henry perceived himself as King David of the Old Testament who, according to tradition, composed the Psalms and whose story was used to justify Henry’s declaration of independence from Rome and to define the Royal Supremacy. It’s little wonder then that the Psalter is more heavily marked up than any other manuscript owned by the King. His copious handwritten notes provide evidence of him probing and contemplating the Psalms, eager to discover what they had to teach him in his new role as ‘Supreme Head on earth of the Church of England’.

Visitors to the Met’s exhibition will see the Psalter displayed open at the first Psalm, which is accompanied by an image of Henry portrayed as David. He is shown sitting in his bedchamber, diligently reading and following the guidance of Psalm 1, which begins ‘Blessed is the man who hath not walked in the counsel of the ungodly … his will is in the law of the Lord.’ To reinforce the point that he considered himself one of the blessed who, as the Psalm instructs, meditate day and night on the law of the Lord, Henry commented ‘nota quis sit beatus’ (note who is blessed). 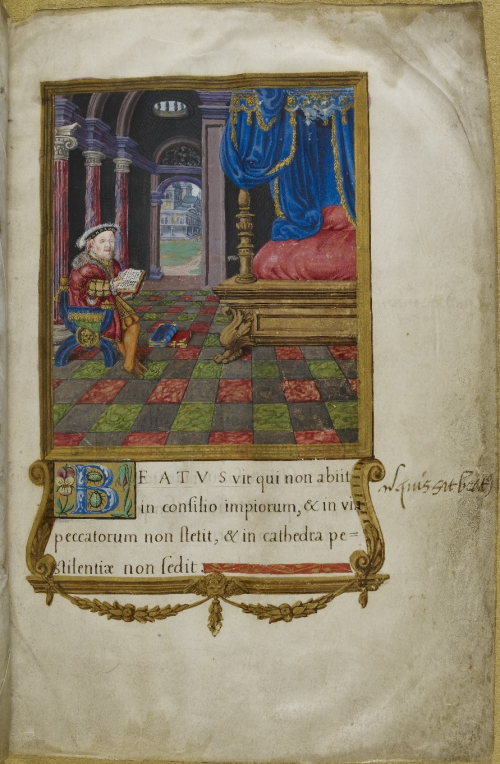 The Psalter contains another three illustrations that link Henry with King David. The second, which prefaces Psalm 26, shows David about to slay Goliath. David is recognisable as Henry, while Goliath is modelled on Pope Paul III, who had excommunicated Henry in 1538. Contemplating this image, which represents the liberation of England from papal authority, must have given the King great satisfaction. The titulus or explanatory gloss added by Mallard in the margin reads ‘Christi plena in Deum fiducia’ (Christ’s full trust in God). One of Henry’s distinctive ‘tadpole’ signs draws attention to the words. They would certainly have resonated with Henry, who was convinced that his enemies would be sought out and destroyed because, like David, he put his trust in the Lord. 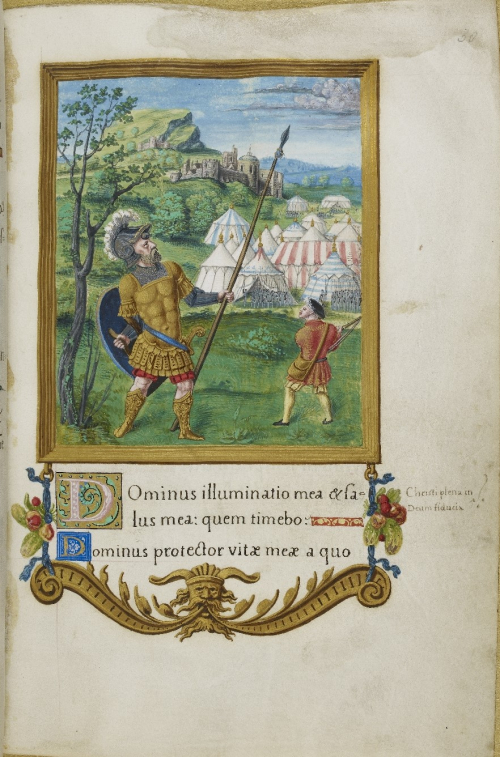 Psalm 52 is accompanied by an illustration of Henry sitting in his Privy Chamber and playing a harp to identify him with the Psalmist. He is accompanied by his jester Will Somers, with whom he enjoyed a close relationship for more than two decades. Appearing rather dejected, the royal fool looks out of the picture towards the first verse of the Psalm, which tells us ‘The fool says in his heart, “There is no God”’. 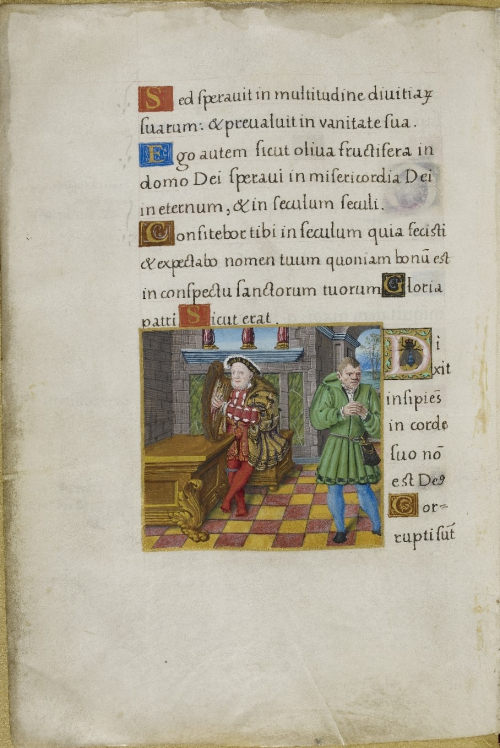 The image accompanying Psalm 68, which begins ‘Salvum me fac’ (Save me, O God), illustrates an episode in the Bible when David is forced to choose between three terrible punishments for his sinful behaviour. The image shows Henry VIII as a penitent King David, kneeling in supplication among the ruins. Mallard’s titulus, which translates as ‘In his distress Christ invokes God’, reminds the reader that David’s torment prefigures that of Christ in the Garden of Gethsemane. 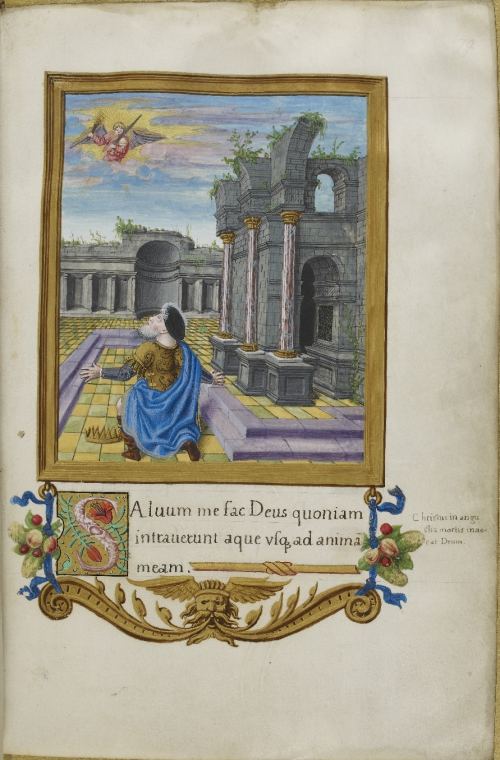 Several of Henry’s annotations also show him identifying with the Old Testament King and searching for guidance. One of the clearest examples is found next to Psalm 88. Using red crayon, Henry noted that the Psalm contains ‘the promise made to David’ and uses a wavy line and tadpole sign to highlight the verses ‘I have laid help upon one that is mighty, and have exalted one chosen out of my people. I have found David my servant, with my holy oil I have anointed him.’ A small number of Henry’s annotations, however, reveal more human concerns. One of the most poignant is found alongside the first half of verse 25 of Psalm 36 which reads: ‘I have been young and now I am old’. Henry, who was in his early fifties, very overweight and in poor health, must have been painfully aware that his time on earth was drawing to a close, and noted that this is ‘dolens dictum’ (a painful saying).

You can see this fascinating manuscript in person at The Tudors: Art and Majesty in Renaissance England which runs at The Metropolitan Museum of Art in New York until 8 January 2023, or view it online at our Digitised Manuscripts website.