‘Do you like gold? Use it!’: A golden binding by Pierre Legrain

‘Do you like gold? Use it!’ So said the fashion designer and art collector Jacques Doucet (1853-1929) to the interior decorator and designer Pierre Legrain (1889-1929) when he encouraged him to apply his talents to designing modern bindings for Doucet’s modern books. Thus began the fruitful collaboration between a collector and a designer which would produce some of the most striking binding designs of the early 20th century. Following his work for Doucet, Legrain became known as a designer of bookbindings in the early 1920s and worked for a number of different clients. He was widely recognised as the leading designer of French bindings of the early 20th century and produced some of his best and most famous work towards the end of his life. 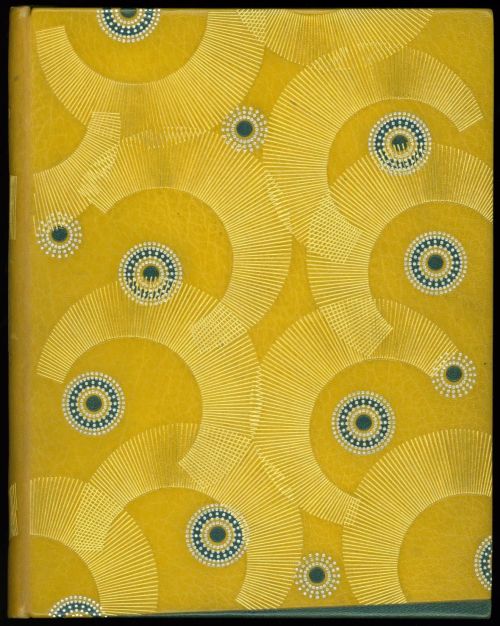 The final case in the British Library’s Gold exhibition contains a number of bookbindings which are all decorated with gold using various techniques. Among them is the most recent object in the exhibition. It is a binding designed by Pierre Legrain in Paris on an edition of La vagabonde by Colette, printed in 1927. The binding was designed by Legrain at the height of his career in the late 1920s and is a great example of the very effective and skilful use of gold tooling. The book is bound in citron goatskin, Legrain’s favourite covering material, and is decorated with blue goatskin onlays and tooled in gold and silver to an all-over art deco design. It is signed by Legrain on the doublure inside the upper cover and belonged to the book collector Major J. R. (John Roland) Abbey (1894-1969) before it was acquired by the British Library in the 1970s.

Pierre Legrain was a designer rather than a bookbinder, and his designs were transferred to bindings by skilled craftsmen, always to the highest standards, first in their studios, and later, once he had become successful and well-known, in his own studio. His style was revolutionary and a departure from all French bookbinding designs produced in previous centuries. His designs were not centred on each cover as had been the case previously, but he instead used both covers and the spine of a book as a blank canvas for which to create a design going all the way across, looking to contemporary art and design for inspiration. Legrain often made use of a ruler and a divider, and his early designs were often geometrical before he moved to more asymmetrical and complicated designs later on in his career.

Legrain was of the opinion that a binding should prepare the reader for the book it encloses. The designs he produced and the way he looked at a binding as a work of art set the tone for how French – and other European – bookbinding design was to develop in the first half of the 20th century.