Following hot on the heels of the exhibition Elizabeth & Mary: Royal Cousins, Rival Queens, we are delighted to announce that the British Library has acquired two documents relating to Mary, Queen of Scots’ imprisonment in England. The first, Add MS 89480, is a letter written by the Scottish queen just 5 weeks after she dramatically escaped from Lochleven Castle and fled into England in May 1568. The second, Add Roll 77740/1, is a set of official financial accounts for Mary's upkeep at Wingfield Manor and Tutbury Castle for the period 18 December 1584 to 27 February 1585 (with Add Roll 77740/2 being a duplicate set of the same accounts). 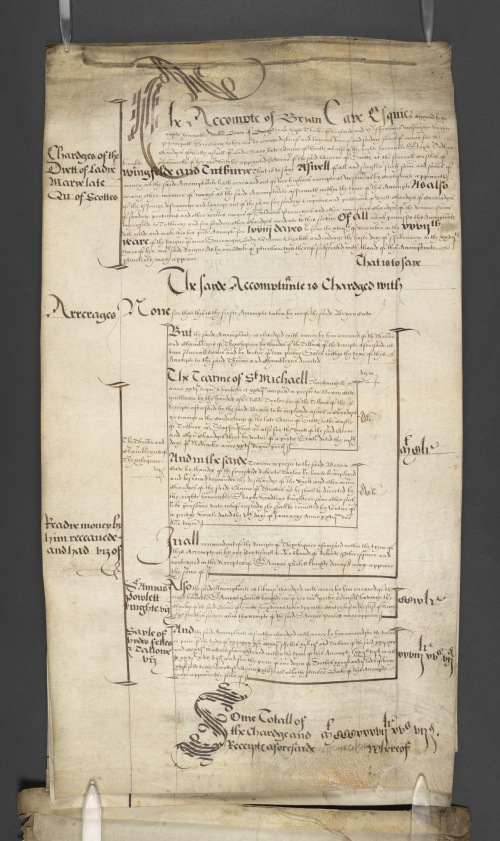 The opening of the official financial accounts for the upkeep of Mary, Queen of Scots: Add Roll 77740/1, membrane 1

On 16 May 1568, Mary and a small group of supporters crossed the Solway Firth in a fishing boat and landed at Workington in Cumberland. The following day, Mary was apprehended by the Deputy Governor of Cumberland and escorted to Carlisle Castle, where she was held under armed guard. Mary wrote immediately to her cousin, Elizabeth I, requesting refuge and military aid to regain her Scottish throne. She described the treasonable actions of her enemies and expressed ‘the confidence I have in you, not only for the safety of my life, but also to aid and assist me in my just quarrel’.

Over the coming days and weeks, Mary persisted in writing long impassioned letters to ‘her nearest kinswoman and perfect friend’, unaware that Elizabeth had already been persuaded by her chief advisor, William Cecil, not to meet with her unwelcome guest. At first, Mary continued to press for an audience with Elizabeth to plead her cause, but as the weeks went by her letters became increasingly reproachful and she complained bitterly about being ‘dishonoured by the refusal of your presence’ and the injustice of her imprisonment. 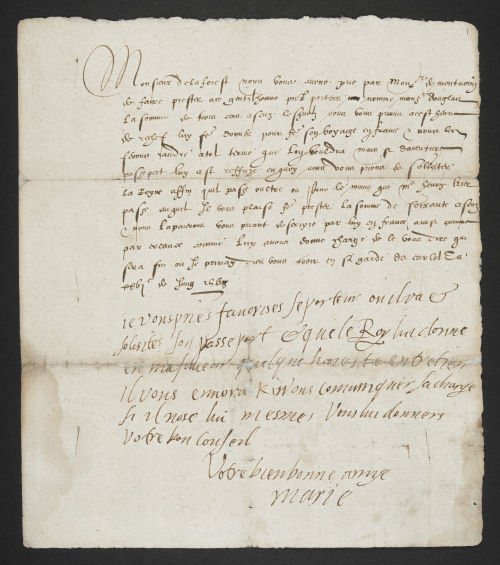 The newly-acquired letter has remained in a private collection in France since the late 1800s and is therefore unknown to scholars. It was written at the exact point Mary realised her English captivity would not be temporary and that Elizabeth was being disingenuous towards her. It is one of the first pieces of evidence for this change of attitude and marks the moment when Mary turned instead to her French family and supporters.

Mary sent the letter from Carlisle on 26 June 1568 to Jacques Bochetel, the French ambassador to England, petitioning him to lend her servant George Douglas 300 écus and to provide safe conduct for him to travel to France for an audience with Charles IX. The first part of the letter is written in a French secretarial hand, but Mary also added a few lines of her own in order to give her request greater force. George Douglas had played an instrumental role in Mary’s escape from Lochleven Castle and was now being entrusted to carry her letters to Charles IX and his mother, Catherine de’ Medici. Other letters by Mary to Charles and Catherine survive in French and Russian archives, in which she petitioned for French aid to her supporters in Scotland and to help her escape imprisonment.

By the time the financial accounts were compiled in 1585, Mary had been held in English captivity for almost 17 years. She had recently been transferred into the custody of Sir Ralph Sadler, and his official correspondence for the same period reveals the pressure he came under to provide for his charge as cheaply as possible. On 18 January 1585, Lord Burghley informed Sadler, ‘hir Majesty … willed me to wryte ernestly unto yow, now at your being at Tutbury, to devise how the chardg may not excede above the rate of mdll (£1500)  by yer.’  The accounts may have been drawn up precisely to inform this cost cutting exercise. They offer a fascinating snapshot of Mary’s life as a prisoner as well as the considerable costs and logistics involved in her upkeep and security. 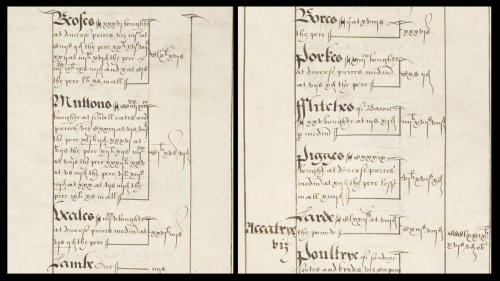 The accounts reveal that Mary continued to be treated as a queen during her confinement. She was attended upon by a large household, dined under her canopy of state and enjoyed elaborate food. She was served two courses at both dinner and supper, with each course consisting of a choice of 16 individual dishes. The accounts provide a detailed record of monies received and paid out for a wide range of foodstuffs, from bread, butter and eggs to meat (beef, mutton, lamb, veal, boar, pork), poultry (capons, geese, hens, heron, partridge, blackbirds) and fish (cod, salt salmon, eels, herring, plaice, haddock, sole, oysters, pike, roach, carp and trout). Also included are spices (pepper, saffron, cloves, cinnamon, ginger, nutmeg, mace), exotic items (oranges, olives, capers, dates, almonds, figs), and sweet luxuries (marmalade, caraway biscuits, sucket or fruits preserved in heavy syrup), as well as wine and ale. 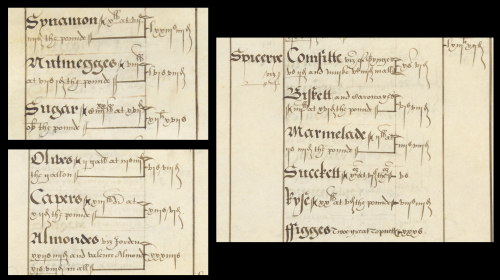 Some of the exotic foodstuffs consumed by Mary: Add Roll 77740/1, membrane 3d

Costs for household supplies are also listed. These include lighting, fuel, cooking utensils and brewing equipment, cord for bedsteads, a bucket for the well, ‘mattinge for the Quenes lodginge’, and soap ‘for washing the Queenes lynnen and the naperie of the house’. In addition, the salaries of laundresses, turnspits, purveyors and labourers are recorded alongside specific charges for ‘mendinge the crome and scouring of armour’ and ‘settinge up and making of bedstedes’. Even though Mary was only occasionally permitted to ride, she continued to keep her own horses. The accounts provide a list of stable expenses such as payment for lanterns, rushes, hay, oats and litter, and for the ‘showinge and medicyninge of the horses’. 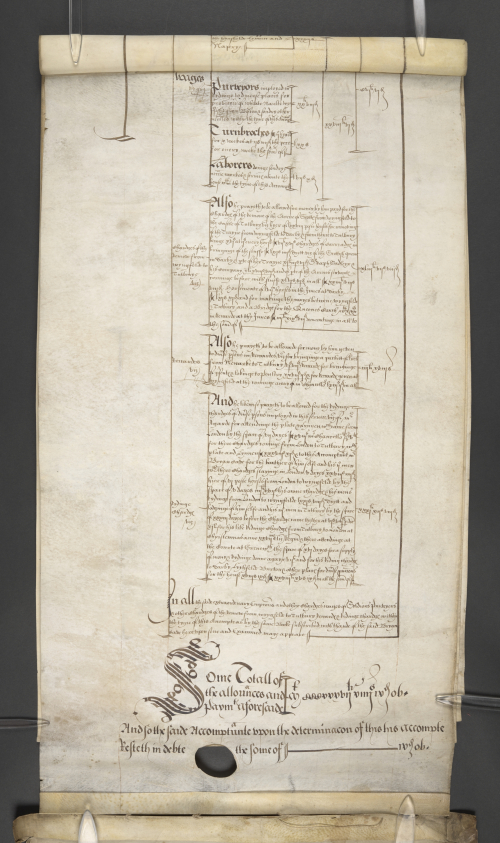 The final portion of the accounts sets out the cost of moving Mary, Queen of Scots, from Wingfield Manor to Tutbury Castle in January 1585: Add Roll 77740/1, membrane 5

Despite enjoying a deluxe form of house arrest, the accounts remind us that Mary was very much a prisoner of the English crown. The 1580s were a time of escalating religious crisis in Europe. Elizabeth’s ministers, fearful for the safety of their queen and the survival of Protestant England, ensured that Mary was kept under increasingly tight security. The salaries of 40 soldiers who kept watch over her are listed in the accounts, with a final entry setting out the cost of Mary’s removal from the pleasant Wingfield Manor in Derbyshire to the much more remote and secure location of Tutbury Castle in Staffordshire in January 1585.

We are extremely grateful to Jeri Bapasola for supporting the acquisition of Mary’s letter. Both items are available for consultation by researchers in our Manuscripts Reading Room.  They have also been digitised as part of the Medieval and Renaissance Women digitisation project, funded by Joanna and Graham Barker, and can now be viewed online: letter of Mary, Queen of Scots (Add MS 89480); household accounts for Mary's upkeep (Add Roll 77740/1 and Add Roll 77740/2).