Reunited! A Russian manuscript of the Alexander Romance

The British Library’s major exhibition, Alexander the Great: The Making of a Myth, gives an insight into the incredible spread of Alexander’s legends across time and across cultures. Central to the show is the legendary life of Alexander the Great, known as the Alexander Romance. Written in Greek around the turn of the 3rd/4th centuries AD, the Romance was a best-seller of its time, being translated into a number of Western and Eastern languages. This blogpost examines one of the most intriguing of these versions: the Slavonic Alexander Romance. 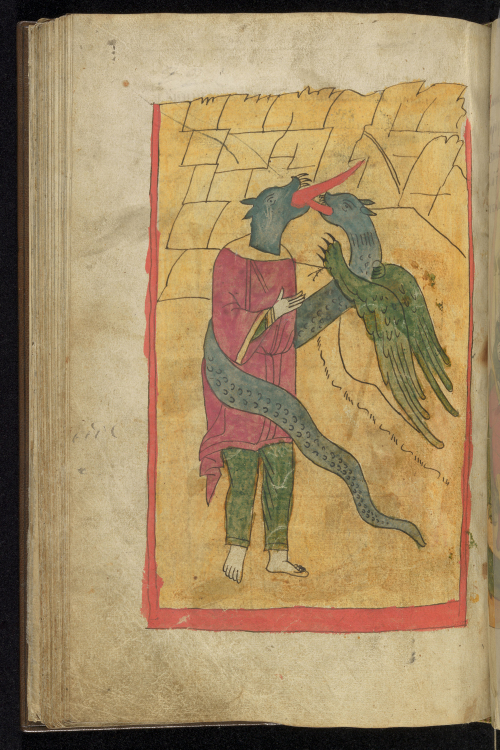 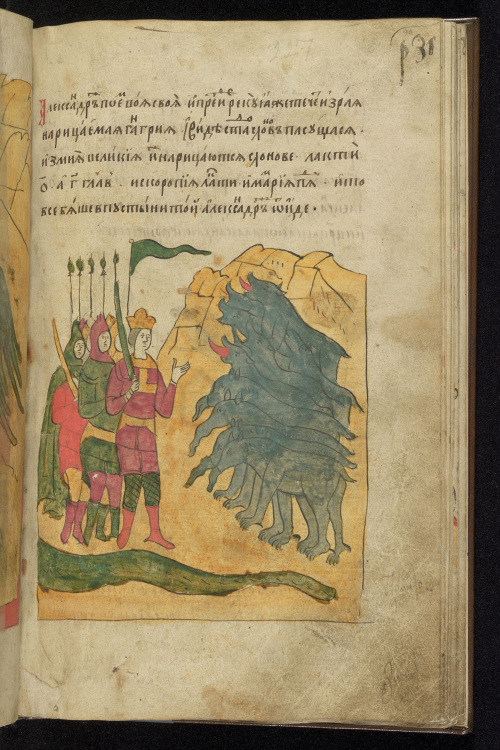 The Slavonic translation of the Alexander Romance was made from the fully-developed Greek-Byzantine version of the text, probably in the 14th century in what is today Serbia, before becoming popular not only in Serbia but also in Bulgaria and Russia. The British Library is fortunate to have a remarkable manuscript of this Slavonic version of the Alexander Romance displayed in the exhibition, on generous loan from the Chester Beatty Library in Dublin.

Created in Russia in the 17th century, this manuscript is a fascinating testament to how Alexander’s legends were appropriated in medieval and early modern Russia. The 14th-century translators of the Slavonic Alexander Romance adapted both the text and the images of their Greek original. Just like the Western and Middle Eastern adaptations, the Slavonic versions of the Romance are richly illustrated. Although many of the illuminations in the Slavonic tradition go back to Greek and Byzantine models, some were devised by the Serbian, Bulgarian and Russian artists themselves.

One new illustration is the representation of Alexander’s horse, Bucephalas. Although the original Greek name of the famous stallion clearly means 'ox-headed', opinions vary about its actual meaning. Some sources say that the horse had an ox-head branding, others suggest it had a mark on its head that made it look like an ox’s head. The Slavic artists combined these two traditions, depicting the horse as bearing an ox-head mark (on its thigh), while painting on its head something resembling an ox’s horn, making the horse look like a unicorn. 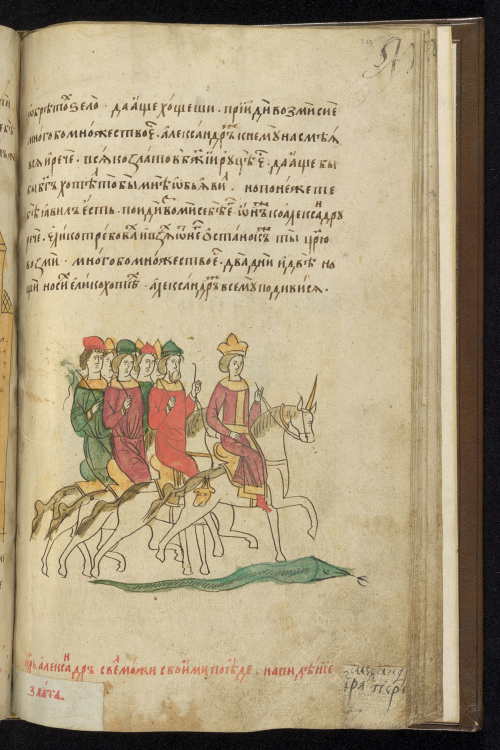 The Romance also records that Alexander encountered mythical sirens during his adventures, who were imagined as beautiful women living in the water. They would lure men with their singing, who would fall asleep in their reed-bed and then drown. In common with ancient Greek tradition, the Russian illustrators imagined the sirens as mythical birds with human heads, enchanting Alexander’s soldiers with their songs. 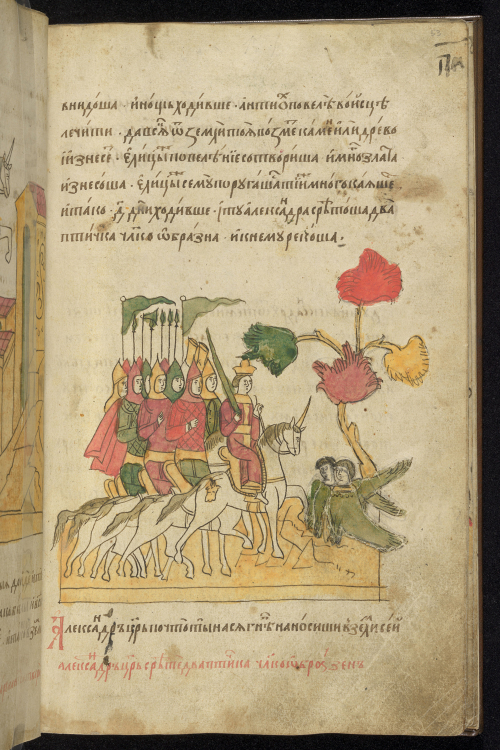 Another interesting feature of the afterlife of the Slavonic Alexander in Russia is that it is often followed in the manuscripts by another Russian historical text. The History of the Rout of Mamai records the battle in 1380 between the Russians led by Grand Duke Dimitry and the Mongol invaders. There is clearly an agenda here to elevate this historical battle (a major turning point in the Russian revolt against the Mongol Khan Mamai) onto a par with Alexander’s mythological adventures. 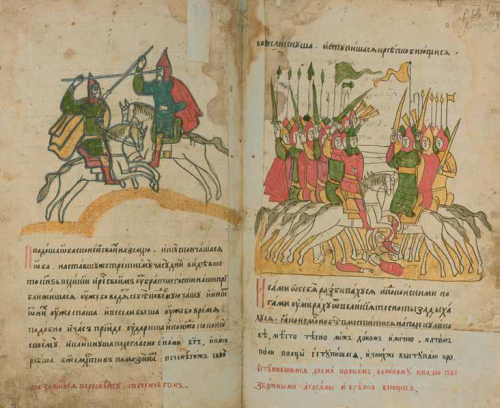 Grand Duke Dimitry in battle with the Mongols, in The History of the Rout of Mamai (Russia, 17th century): Yates Thompson MS 51, ff. 38v–39r

Scholars have observed that the Chester Beatty manuscript looks remarkably similar to a 17th-century copy of The History of the Rout of Mamai at the British Library. They have in common the layout of the text, the decoration, a similar pattern of damage, and 19th-century attempts to redraw the outlines of the images in pencil. A conclusive factor is that the Slavonic page numbers in the right-hand corner of the leaves in the British Library manuscript continue the sequence of those found at the end of the Chester Beatty's Slavonic Alexander Romance. 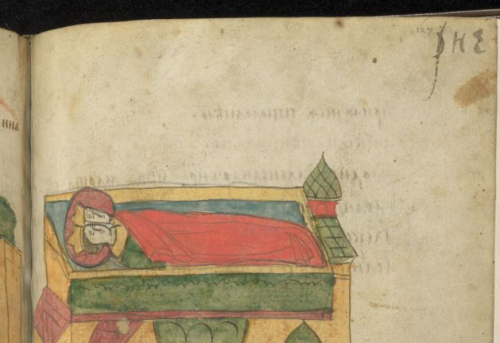 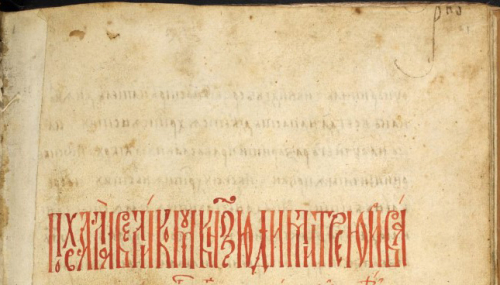 Based on these observations, scholars have treated the two manuscripts as parts of a single original volume containing both the Slavonic Alexander Romance and The History of the Rout of Mamai. Further research has revealed that both manuscripts were purchased around 1921 from the same antiquarian dealer in Florence, who separated them into two parts, selling one to Sir Alfred Chester Beatty (1875–1968) and the other to Henry Yates Thompson (1838–1928), whose widow bequeathed it to the British Library in 1941. 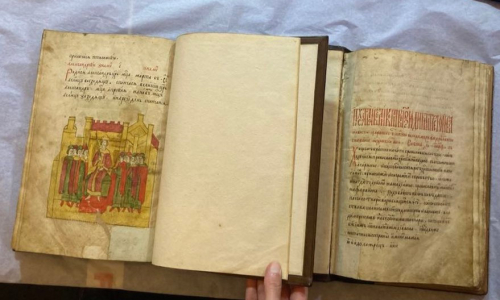 The two halves of the original volume next to each other, the Chester Beatty Slavonic Alexander Romance on the left and the British Library’s History of the Rout of Mamai on the right

Although it is widely accepted that these manuscripts originally formed one volume, the two halves have never been compared side-by-side until the generous loan of the Chester Beatty Slavonic Alexander to the British Library’s Alexander exhibition. After more than a century apart, the two halves now stand proudly next to each other in the show.

Book your tickets now to see the reunification of this important manuscript and to join Alexander on his other adventures. Alexander the Great: The Making of a Myth is open until 19 February 2023.