It’s not something you’ll find on your average Christmas card, but the Chi-rho is a Christmas symbol that appears in some of the oldest surviving gospel-books. One of the most spectacular examples is the Chi-rho page in the Lindisfarne Gospels, which is now on display in the British Library’s Treasures Gallery. But this is far from the only Chi-rho page in the Library’s collection. With Christmas just around the corner, we think it’s the perfect time to celebrate some of our festive Chi-rhos and their rich meanings. 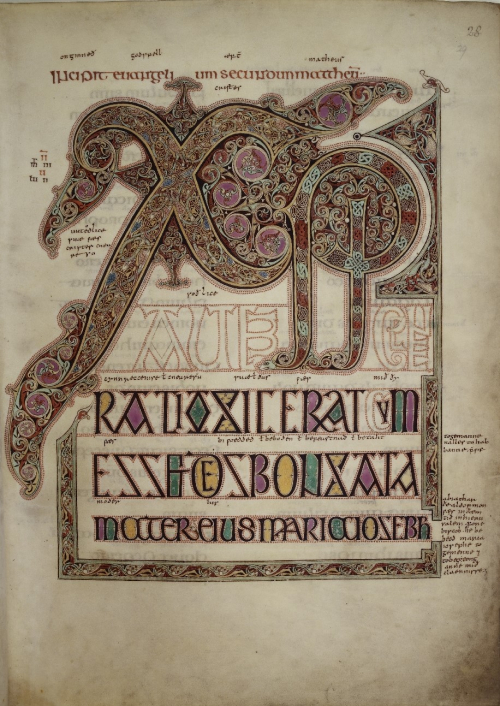 What is a Chi-Rho page?

Chi-rho pages are a feature of Insular gospel-books. These are copies of the biblical accounts of the life of Christ in Latin, produced within the monastic culture that developed in Ireland, Britain and closely connected centres in the 7th-8th centuries (known as Insular in reference to ‘the Isles’).

The Chi-rho is the abbreviated name of Christ in Greek, spelled chi-rho-iota and written with the capital letters ‘X-P-I’. In Insular gospel-books there is a large decorated Chi-rho at the beginning of the account of the Incarnation at Matthew 1:18, ‘Christi autem generatio sic erat’ (Now the birth of Jesus Christ was in this way). In the most magnificent examples like the Lindisfarne Gospels, made in Northumbria in the early 8th century, the letters fill almost the entire page with brilliant pattern. 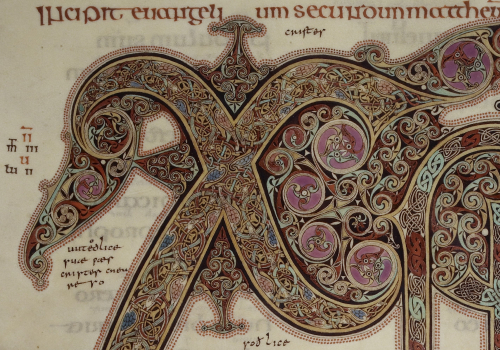 History of the Chi-rho page

The practice of abbreviating divine names, or nomina sacra, goes back to at least the 2nd century, when letters representing the name of Christ were employed as Christian symbols. Nomina sacra were commonly abbreviated in early Greek bibles as a way of showing reverence and making them stand out visually. For example, in the 6th-century Greek gospel-book the Codex Purpureus Petropolitanus (Cotton MS Titus C XV), the main text is written in silver ink while the nomina sacra are abbreviated and written in gold. Insular Chi-rho pages took this much older practice and expanded it to make the sacred name a major focus of decoration. 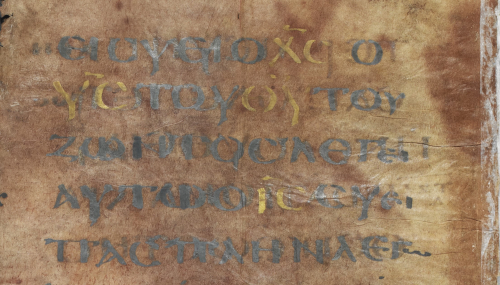 The earliest surviving Chi-rho pages date from around 700, and they appear in gospel-books from Ireland, England and areas where Insular scribes were working or had strong influence. By contrast, most gospel-books produced in continental Europe followed the late antique practice of placing no or very little emphasis on the text of Matthew 1:18.

An interesting example of a continental gospel-book which has a Chi-rho page is the Schuttern Gospels (Add MS 47673), made at the Benedictine abbey of Schuttern in southwest Germany in the early 9th century. Schuttern was one of many monasteries in the Upper Rhine and Lake Constance area founded by Irish monks in the 7th century. Liutharius, the deacon who wrote the Schuttern Gospels, was probably a local judging by his name, and he wrote in a Carolingian minuscule script. Nevertheless, the decoration of the manuscript is strongly Insular, suggesting that the monastery’s early history still held major influence in its scriptorium. 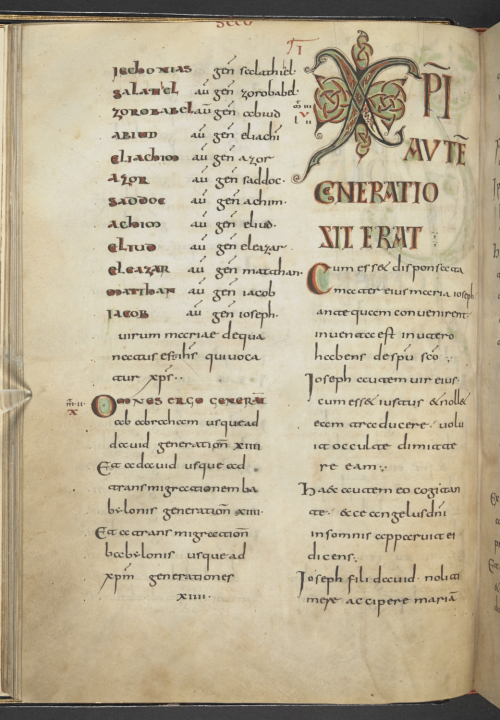 Although Chi-rho pages stopped appearing in English gospel-books after about the 8th century, they continued in other areas until much later. One of the latest surviving Chi-rho pages is in the Gospels of Máel Brigte (Harley MS 1802), made in Armagh, Northern Ireland, in 1138. You can read more about this fascinating manuscript, written by the 28-year-old scribe Máel Brigte and illuminated in an Irish-Scandinavian style, in our previous blogpost. Symbolism of the Chi-rho page

Coming at the beginning of the narrative about Christ’s birth in the Gospel of Matthew, the Chi-rho is generally seen as a symbol of Christ’s Incarnation, or human conception and birth. In the Gospel of John the Incarnation of Christ is mystically described as the moment when ‘the Word was made flesh and dwelt among us’ (John 1:14). By emphasising the word ‘Christ’ at the beginning of the Nativity account, the Chi-rho can be seen to literally illustrate the idea of the Word becoming flesh, especially since Insular gospel-books were written on parchment made from animal skin.

Yet the Chi-rho is also particularly evocative because the letter chi is in the shape of a cross, so it could signify both Christ’s name as well as his Crucifixion and its redemptive power. For Christians, the human birth of Christ is significant because it meant that he could die a human death and so save humanity from sin. Through its shape the letter chi poignantly connects these two important events. 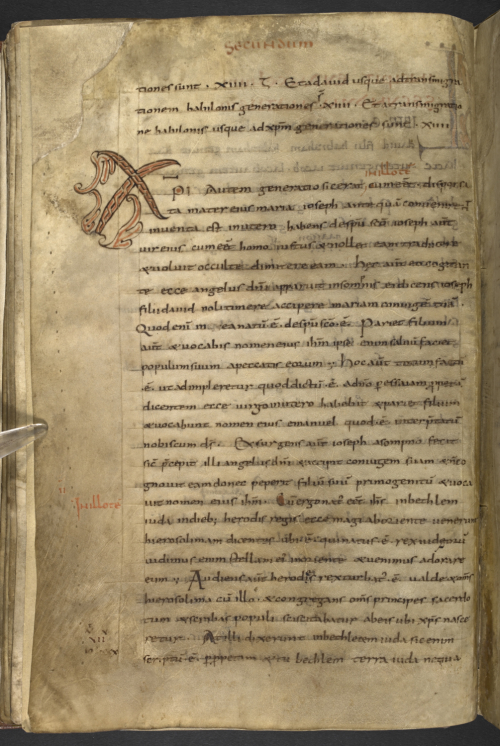 The idea that the Chi-rho symbolises the living Word and the life-giving Cross perhaps explains why Insular Chi-rhos are often teeming with life. For example, in this gospel-book, made in Brittany in the early 10th-century and digitised by the Polonsky Foundation England and France Project (Royal MS 1 A XVIII), animal heads with foliage sprouting from their mouths emerge from the end of each stroke of the letter chi. This gives the impression that the letter is bursting with life and abundance. 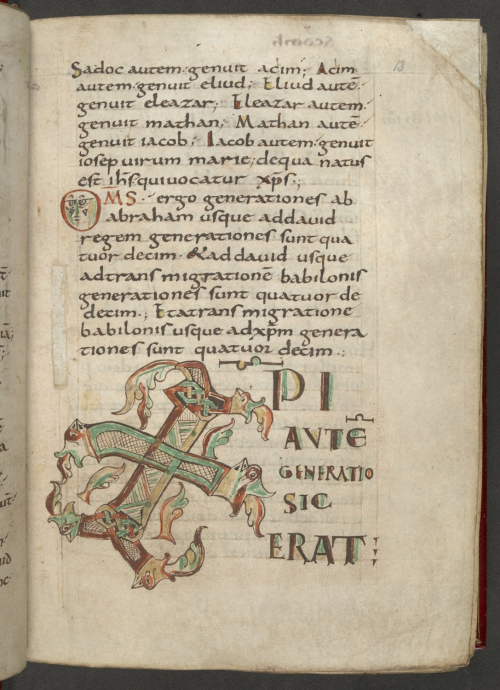 Greek was not widely known in western Europe in the early Middle Ages. Both the use of Greek letters and abbreviation made the Chi-rho difficult to understand. This cryptic quality was probably part of its appeal, suggesting the mysterious nature of God. The Chi-rho was not simply a word but a symbol of something inexpressible.

Nevertheless, the Chi-rho proved too enigmatic for some scribes and readers, as shown by the garbled Chi-rho in a gospel-book made in Northumbria in the first half of the 8th century (Royal MS 1 B VII). Here it seems that the scribe mistook the Greek letter rho for a Latin letter ‘P’, and transliterated it to the Greek letter pi (Π). They also wrote the letter ‘H’ instead of ‘A’ at the beginning of the Latin word autem, perhaps misunderstanding the Irish convention of spelling the word with an added ‘h’ at the beginning, as hautem. The result is that instead of ‘XPI AU/tem’, the scribe has written ‘XΠI HU/tem’ – a string of letters that make no sense. 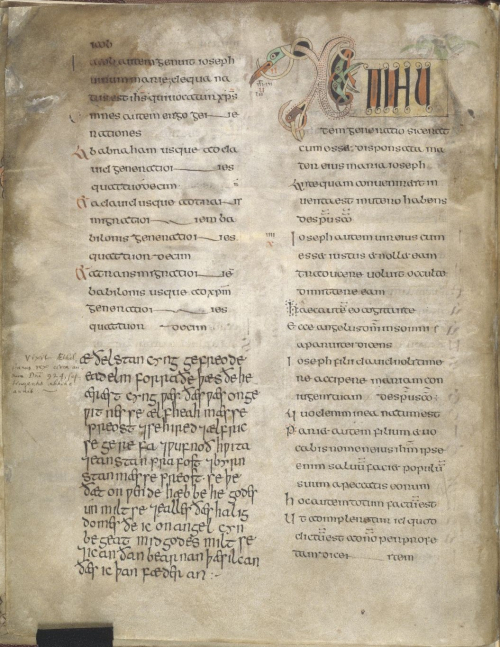 Chi-rho page in the Royal Athelstan Gospels, Northumbria, first half of the 8th century: Royal MS 1 B VII, f. 15v 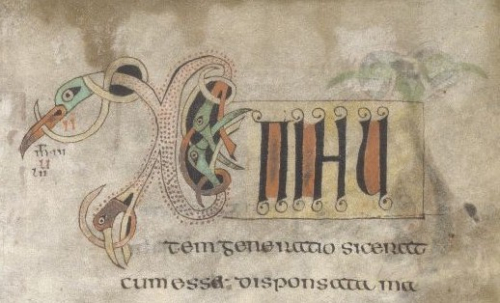 The garbled Chi-rho in the Royal Athelstan Gospels, Northumbria, first half of the 8th century: Royal MS 1 B VII, f. 15v (detail) 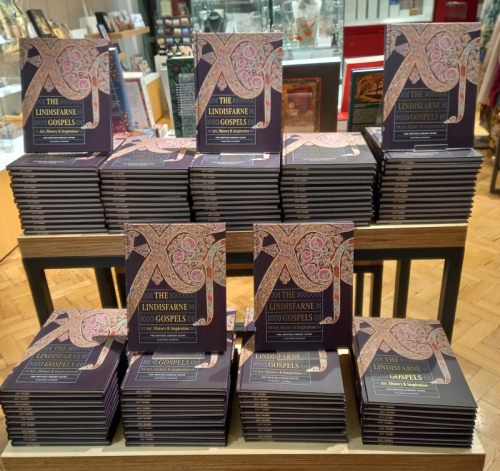 Looking at these majestic Chi-rho pages, we can get a sense of some of the awe, mystery and joy with which monastic scribes and readers regarded the birth of Christ many centuries ago. From everyone in the Medieval Manuscripts team, we wish you a very Happy Christmas!