How do you tame a wild horse?

The average medieval reader would have been familiar with horses both on the page and in real life. Horses have served humans throughout history, particularly for warfare or transportation. They are also faithful companions to many heroes in ancient and medieval literature. Taming a feral horse, on the other hand, is no easy feat. Only the most skilled warrior would be capable of undertaking such a difficult task. According to legend, this was none other than Alexander the Great, the subject of our current major exhibition, Alexander the Great: The Making of a Myth. 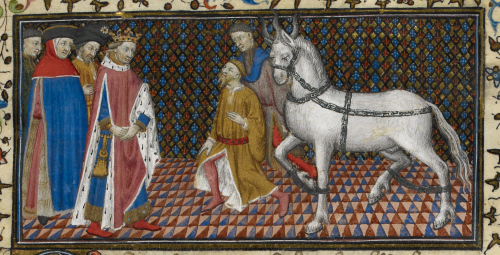 Alexander the Great’s horse is one of the most famous equine figures in ancient and medieval literature. His name ‘Bucephalus’ derives from the Greek ‘Βουκεφάλας’ meaning ‘ox-head’. He was no ordinary horse, as his name indicates, for he is often depicted in medieval versions of Alexander’s legends as an untamed hybrid with three horns on his head. He was also notorious for eating human beings.

When Alexander was a teenager, his father, King Philip of Macedonia, enclosed Bucephalus in a dungeon for safekeeping, but he would send traitors to the horse’s enclosure to be devoured as punishment. Illuminations from some of our manuscripts portray Bucephalus in a cage or chained with shackles. Later, King Philip heard a prophecy that predicted that only the one who could tame and mount the wild horse would be the future king. 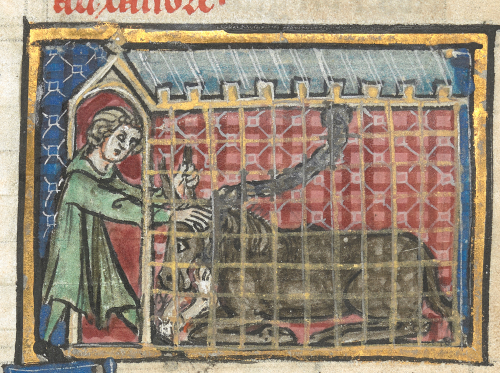 According to an earlier version of the episode in Plutarch’s Life of Alexander, no one was able to mount the horse or tame him, until Alexander noticed that the horse became distressed from the movements of his own shadow. To calm the animal, Alexander turned the horse towards the Sun, so that his shadow no longer frightened him. At last, Alexander was able to mount Bucephalus and claimed him as his own charger, ready for his destined conquests. 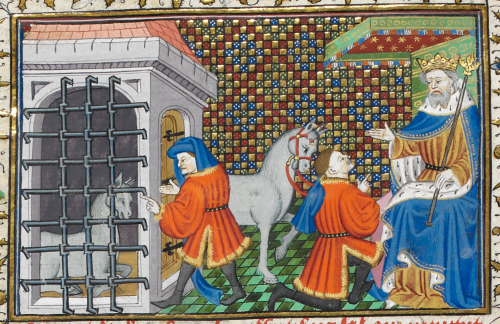 In some medieval texts, such as Thomas of Kent’s Le roman de toute chevalerie, Bucephalus’s ferocity was used to Alexander’s advantage in battle. The horse is described as tearing violently through the enemy cavalry, since Bucephalus often preferred human flesh over grass.

In an earlier version of the Alexander legends, known as the Greek Alexander Romance, Bucephalus outlived Alexander, and wept for his master on his deathbed after Alexander was poisoned during his coronation feast at Babylon. On the subject of grieving horses, Isidore of Seville, a 7th-century scholar, claimed that horses ‘shed tears when their master dies or is killed, for only the horse weeps and feels grief over humans’ (Etymologies, book 12, 1:41: translated in The Etymologies of Isidore of Seville, ed. Stephen A. Barney et al. (Cambridge: Cambridge University Press, 2006), p. 249). Perhaps Isidore had heard of the loyalty and grief shown by Bucephalus’s towards his master, Alexander the Great, or that of other loyal horses throughout history and literature.

In later medieval versions of the story, Bucephalus is killed prematurely in battle by Alexander’s arch-enemy, King Porrus, before Alexander’s coronation at Babylon. In one manuscript illuminated in 15th-century Paris (Royal MS 20 B XX), this occurs soon after Alexander had successfully unhorsed Porrus during a joust. 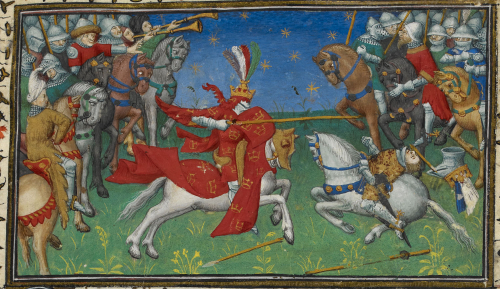 Tragically, for Bucephalus, Porrus got his own back when he managed to kill Alexander’s beloved horse in battle. Alexander, distraught at the loss of his loyal companion, buried Bucephalus with his soldiers by his side. 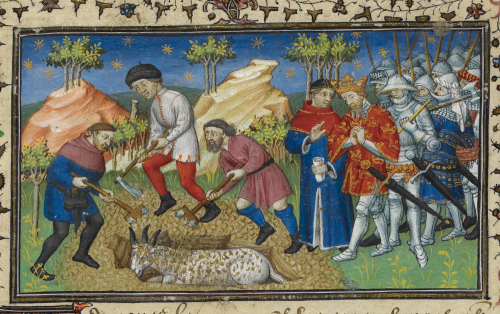 In honour of his heroic horse, Alexander dedicated a city in his name, so that the memory of Bucephalus was not forgotten. And so, from a ferocious caged beast to a most loyal royal companion, Bucephalus lives on in the legends of Alexander that we continue to read today. 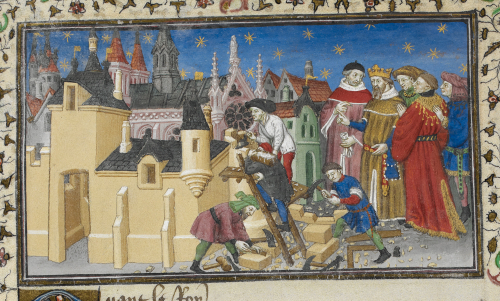 Alexander building a city as a memorial to his horse, Bucephalus: Royal MS 20 B XX, f. 82r

Alexander the Great: The Making of a Myth at the British Library runs until 19 February 2023. Tickets can be bought in advance or on the day, subject to availability.

We are indebted to the Kusuma Trust, the Patricia G. and Jonathan S. England – British Library Innovation Fund and Ubisoft for their support towards the exhibition, as well as other trusts and private donors. You can discover more about the legends of Alexander the Great on our website.