A star item in the British Library's current exhibition, Alexander the Great: The Making of a Myth, is this unique, full suit of armour decorated with scenes of Alexander’s glorious deeds in gold. It was made for Prince Henry Frederick (1594–1612), son of James I of England and VI of Scotland, who was addressed by the poet, Henry Peacham in his Basilica Emblemata as ‘the second Alexander, the nurturing hope of Britons’. 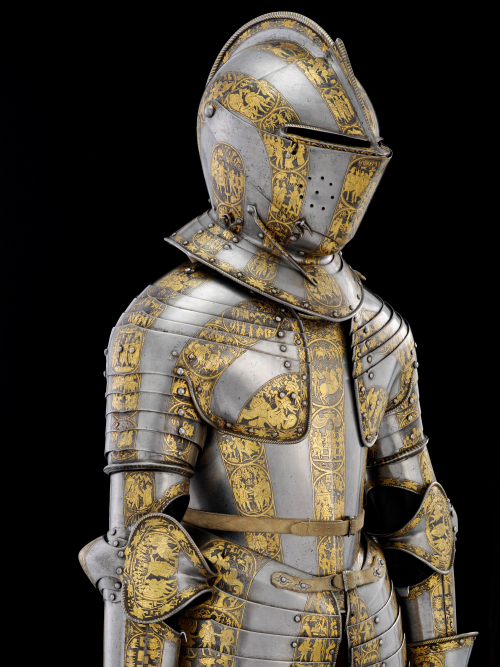 When Sir Francis Vere formally presented the armour to Prince Henry in 1608, he was following a long-established tradition of gift-giving between rulers and the elite within society. Fine quality armour and weapons provided legitimacy to ruling dynasties, strengthening diplomatic links, and securing patronage for the donors. 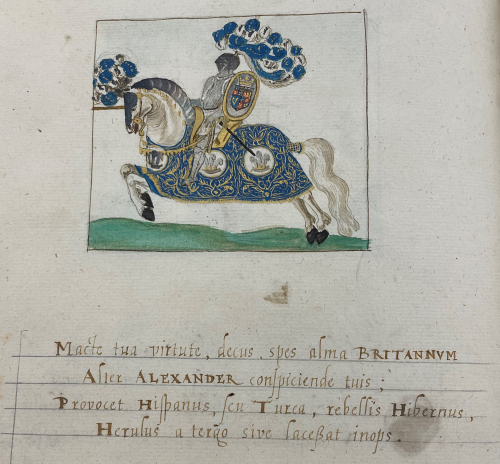 Sir Francis Vere’s younger brother, Sir Horace, probably took the leading role in the armour’s creation. Both brothers had long military careers in the Netherlands and were closely connected to the princely House of Nassau. The evolution of this spectacular armour can be attributed to this relationship. Why, though, did they choose Alexander the Great as the decorative theme?

Role models from Antiquity were very much part of a princely education. Alexander, despite certain character flaws, was still seen by many as an example of a strong, successful military ruler. Moreover, Henry’s father, James I (king of England 1603–1625), placed particular emphasis on the prestige and authority of monarchy. Direct associations between Prince Henry and Alexander the Great increased as he approached adulthood. To many, the young prince reflected the hopes and aspirations of those committed to active English military intervention in the Low Countries. The designs on this armour are unique; no other example is known to have survived in which the decoration completely revolves around Alexander the Great. This is very clearly a piece of art, as well as a functioning piece of military equipment. Stylistically, the decoration bears a very strong resemblance to armour represented in the portraits of other members of the House of Nassau. By the early 17th century, the centres for the production of fine armour had largely moved to the Netherlands and France. Figures from Antiquity, including Alexander, were often incorporated into the decoration. The designs on the borders of Prince Henry’s armour are similar to other examples; 17th-century drums appear alongside modern weapons, but all with a distinct Hellenistic flavour. Many of the shields contain faces that are reminiscent of Greek drama, perhaps an oblique reference to the Jacobean love of theatre.

Masks, weapons and drums on the armour of Prince Henry Frederick: London, Royal Armouries II.88 (detail) © Courtesy of the Board of Trustees of the Royal Armouries

Given the nature of the narrative presented, it seems likely that the armour was meant to be read piece by piece from the feet upwards. This is the order in which an armour was attached to the body. Oval cartouches containing various episodes in Alexander’s campaign are positioned in a broadly accurate chronological sequence, with each piece of armour representing different stages in the campaigns. As the eyes move up the front of the body, Alexander progresses from Palestine into Afghanistan, reaching India on the helmet. Key events are represented along the way, including the battle of Hydaspes on the arms (vambraces), including formations of elephants on the left and right. 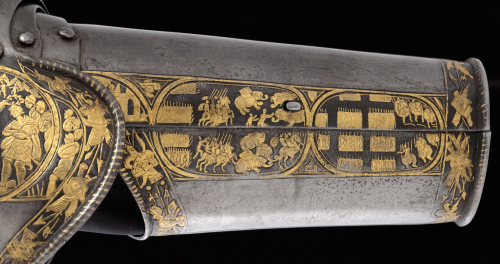 Alexander’s army battles the Elephants of Porus, on the armour of Prince Henry Frederick: London, Royal Armouries II.88 (detail) © Courtesy of the Board of Trustees of the Royal Armouries

On the back of the armour, the campaigns following Hydaspes are represented. On the backplate are the marriages of Alexander to the Bactrian princess Roxanne, and of his generals to other women. This was perhaps a veiled reference to the importance of dynastic marriage. Alexander’s return to Babylon brings the series to a close; on arrival he meets a priest of Baal, with a group of camels in the background. 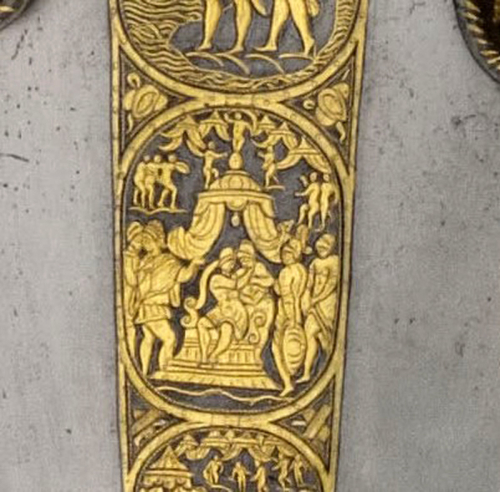 Alexander marries Roxanne, on the armour of Prince Henry Frederick: London, Royal Armouries II.88 (detail) © Courtesy of the Board of Trustees of the Royal Armouries

One could explain the narrative of the armour simply within the context of martial prowess and military conquest. The stories of Alexander appear to follow the classical texts of Plutarch, Quintus Curtius Rufus and others, with the focus primarily on military exploits. Yet there are also warnings for the young prince. In a number of scenes, the relationship between Alexander and his royal companions is shown positively. He is seen fighting alongside them and demonstrating his personal prowess by taking part in lion hunts, then rewarding them for loyal service and receiving gifts from them. 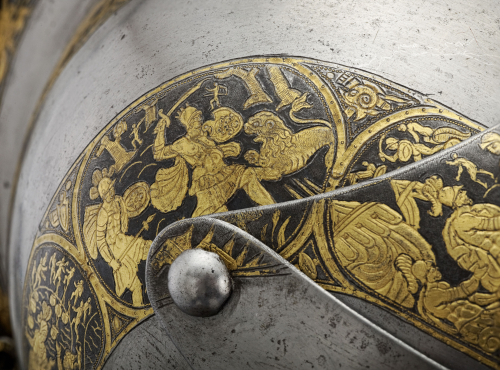 A lion hunt, on the armour of Prince Henry Frederick: London, Royal Armouries II.88 (detail) © Courtesy of the Board of Trustees of the Royal Armouries

Conversely, in one image, Alexander is seen seated with his body language suggesting he is at odds with his two companions. And on the rear of the armour, the Macedonian army is shown in revolt against Alexander, and returning home by ship. 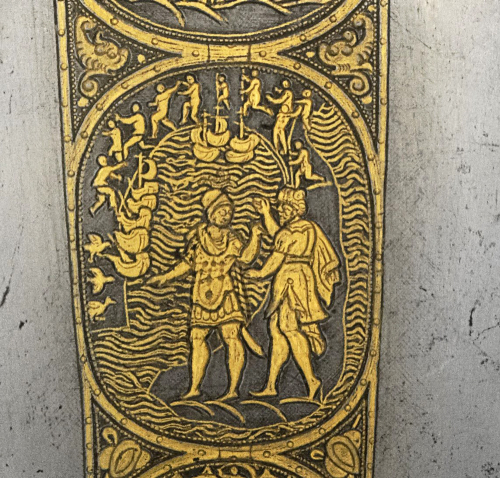 The mutiny of the Macedonian army against Alexander and their departure on ships, on the armour of Prince Henry Frederick: London, Royal Armouries II.88 (detail) © Courtesy of the Board of Trustees of the Royal Armouries

The positive aspects of brotherhood-in-arms were clearly on the minds of the English military community, but so, too, were the pitfalls. They could represent a threat to the success of Prince Henry’s much anticipated reign. Sadly, he died of typhoid aged 18 before he could become king.

Prince Henry Frederick armour has been kindly loaned by the Royal Armouries to the British Library exhibition Alexander the Great: The Making of a Myth, where it is on display until 19 February 2023.

We are indebted to the Kusuma Trust, the Patricia G. and Jonathan S. England – British Library Innovation Fund and Ubisoft for their support towards the exhibition, as well as other trusts and private donors. You can discover more about the legends of Alexander the Great on our website.