Originally produced around 1300 by the nuns of the monastery of Ebstorf in northern Germany, the Ebstorf map with its enormous dimensions (over 3m x 3m and made up of thirty parchment sheets) was the largest world map known from the Middle-Ages. It was destroyed in 1943 by Allied bombing of Hanover during World War II. The image shown here is a digital facsimile created in 2008 at the Leuphana Universität Lüneburg from images of the original. 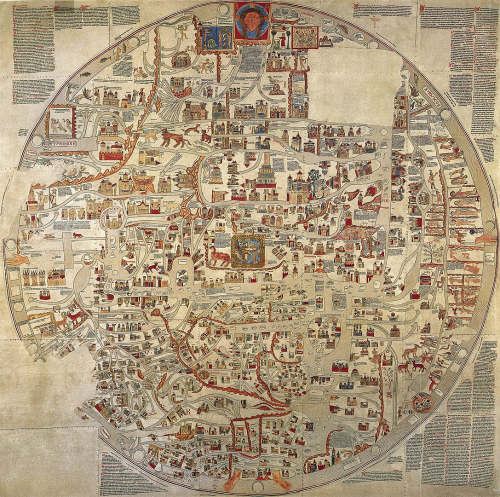 There are 2,345 entries on the Ebstorf map, 845 of which are illustrated, and 17 relate explicitly to Alexander the Great and the Alexander Romance.

The British Library has collaborated with Escape Studios’ School of Interactive and Real Time to create an interactive version of the Ebstorf map. A team of students and graduates participated in the ‘Escape Pod’ incubator to create a 3D version of the map, using the digital facsimile created by Leuphana Universität Lüneburg.

The interactive map, created in Unreal Engine, has been set in a fictional medieval scriptorium to suggest the tone of the space in which it was created. All aspects of the room were imagined, researched and created by the students at Escape. 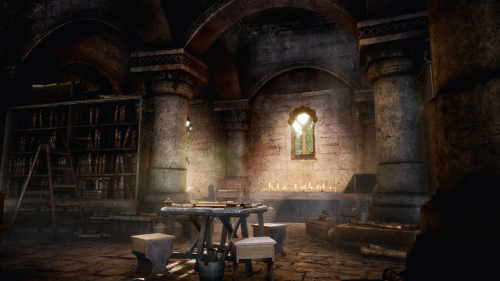 Still of the interactive map experience, showing the scriptorium in which the map is made

The interactive map has fifteen clickable points of interest, a mix of buildings, mythical landmarks and characters. These are all created in the same style of artwork as the original map. When a point is selected it prompts a small 3D model to pop up with text and a voice recording, presenting details associated with this area of the map. All of the fifteen points relate to Alexander the Great. 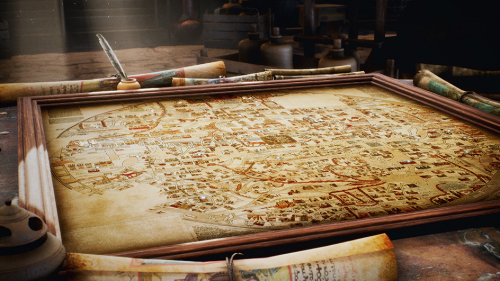 Still of the interactive map experience, with a view of the framed map on a table. Glowing white dots can be seen on the map, indicating the 15 clickable points.

All the animations at each of the 15 clickable points on the map were carefully crafted to ensure the style and artwork was in keeping with the original designs created by the nuns of Ebstorf. 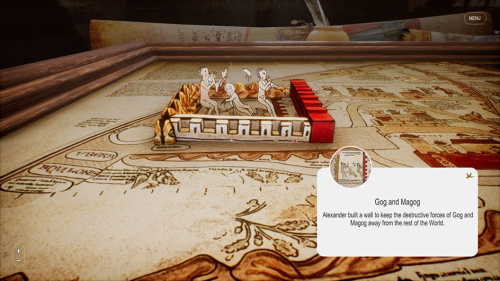 Still of the interactive map experience, with a view of a one of the clickable points featuring Gog and Magog

The British Library and Escape Studios are delighted to offer a free download of the interactive map via the Alexander the Great: Making of a Myth website.

A facsimile of the Ebstorf map is also featured in the 'Mythical Quest' section of our current major exhibition, Alexander the Great: the Making of a Myth , open until 19 February 2023. Tickets are available to book in advance online or on the door, subject to availability.

Posted by Ancient, Medieval, and Early Modern Manuscripts at 8:05 AM