Medieval rulers often issued documents, such as privileges, grants and mercies, to assert their sovereignty. Castile was no exception to this rule. The most solemn type of document produced by the medieval Castilian chancery was known as the ‘privilegio rodado’ (literally, ‘privilege with a wheel’). One such charter is a confirmation of a grant of lands issued on 30 December 1254 by the Castilian royal couple Alfonso X of Castile (r. 1252–1284) and Violante of Aragon (b. 1236, d. 1300/1). This charter (Add Ch 24804) has recently been digitised as part of our Medieval and Renaissance Women project and it can now be viewed online for the first time. 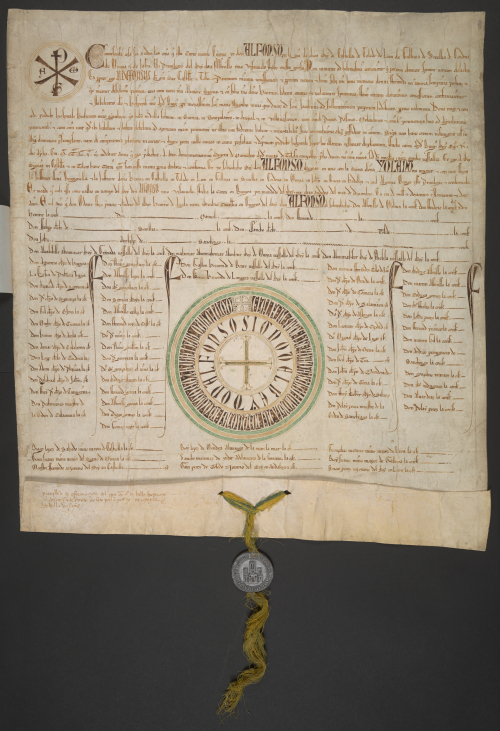 The confirmation grant by Alfonso X of Castile and Violante of Aragon: Add Ch 24804

Alfonso X’s interest in books, scholarship and the promotion of arts, history, law and literature was well known by his contemporaries, so much so that his patronage earned him the moniker ‘The Learned’ or ‘The Wise’. He had married Violante of Aragon, the daughter of King Jaume I of Aragon and Violante of Hungary, in 1246, when he was still heir to the throne. Together, Alfonso and Violante ruled for over thirty years, although their marriage became strained after the death of their heir, Fernando de la Cerda, in 1275.

The recently digitized ‘privilegio rodado’ was co-issued by both monarchs, which means that they granted it jointly. Both their names, Alfonso and Violante, are highlighted equally in the charter. Moreover, the use of the diplomatic formula ‘reigning as one’ (‘regnante en uno’) emphasised the importance of the female members of the royal family, including Violante and the royal daughters in the issuing clause of the charter. Hence, the use of the phrase ‘reigning as one’ reflected the participation of both members of the royal couple in the affairs of the kingdom.

King Alfonso X regulated extensively the structure of the ‘privilegio’ and how it needed to be granted, as described in the ‘Siete Partidas’, one of several legal codes produced throughout his reign. (You can read more about this treatise in our blogpost on the law-code of Alfonso.) In the ‘Siete Partidas’, Alfonso X established the various elements that ensured the legal validity of the ‘privilegio’, and which bestowed it with an impressive appearance. The most striking element was the ‘signo rodado’, a wheel at the very centre of the charter. King Alfonso details in the ‘Siete Partidas’ that this should be ‘a flourish, in the shape of a circle’, which ought to include in the middle ‘the name of the king who bestows the grant, and outside of the latter should be signed by the name of the standard-bearer and of the royal steward’ (Siete Partidas, Partida III, Title XVIII, Law II).

In the inner circle of our charter we can read: ‘SIGNO DEL REY DON ALFONSO’, that is, the sign of King Don Alfonso.

In the outer circle: ‘DON IVAN GARCIA MAYORDOMO DE LA CORTE DEL REY LA CONFIRMA + EL ALFEREZIA DEL REY VAGA’, that is, the steward and the standard-bearer of the King confirm it. 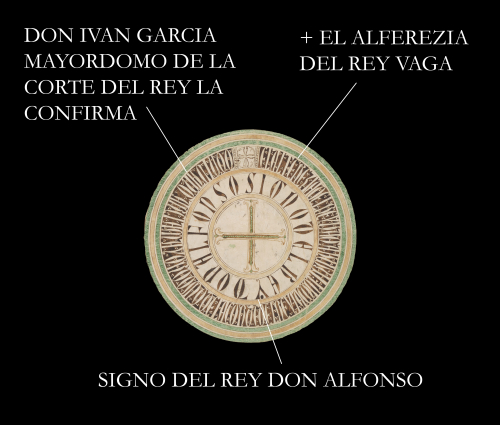 Other elements that bestowed the ‘privilegio’ with legal validity were the ‘chi-ro’ or ‘christogram’ at the beginning of the charter, as well as the extensive witness list of lay nobles and ecclesiastical magnates. In this instance they included the Moorish kings of Granada, Murcia and Niebla. Once written, the charter was sealed with a leaden seal, affixed by a silken cord. The original silk threats have survived on our document, together with the seal that shows the arms of Castile and Leon, namely a castle and a lion.

Obverse and reverse of the leaden seal attached to the grant: Add Ch 24804

Throughout the Middle Ages, charters, grants and documents were dated using different dating systems, In Castile, the customary system was the ‘Era Hispánica’ or Spanish Era. However, the dating clause could also include a reference to an extraordinary or unusual event which happened in that year. In this case, the charter is also dated ‘in the year in which Edward, first-born son and heir of King Henry III of England (r. 1216–1272), was knighted by King Alfonso X in Burgos’, that is, in 1254. Lord Edward, son of Henry III (and the future King Edward I), had travelled to Burgos to be knighted before his wedding to Eleanor of Castile, half-sister of Alfonso X, King of Castile. Hundreds of people gathered in Burgos for that occasion.

The striking wheel, the magnificently preserved seal and the original silk threads make this charter a particularly fine example of a ‘privilegio rodado’, and a rare survival within the British Library’s collections.

We are extremely grateful to Joanna and Graham Barker for their generous funding of Medieval and Renaissance Women.