Five hundred years after the artist Albrecht Dürer (1471–1528) travelled through the Low Countries, the exhibition “Dürer was here. A journey becomes legend” has opened at the Suermondt-Ludwig-Museum in Aachen, Germany. Drawing on the detailed travel journal that Dürer kept, the exhibition reconstructs the artist’s journey, with a particular focus on the time he spent in Aachen in 1520 when he attended the coronation of Emperor Charles V.

The British Library is delighted to have loaned the only surviving page-fragments from Dürer’s original journal to the exhibition, where they are displayed with an early copy of the complete text, loaned by the Staatsbibliothek in Bamberg. The first British Library fragment shows two sketches of a piece of folded cloth with instructions on how to make a type of woman’s cloak worn in the Low Countries. 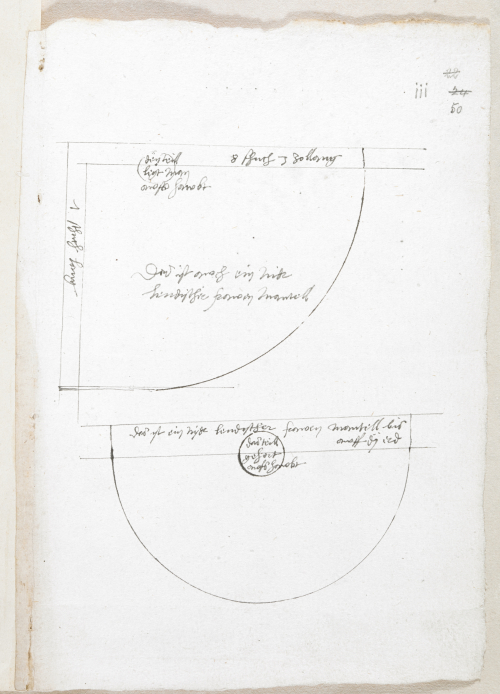 The second fragment contains two sketches of the Coat-of-Arms of Lorenz Staiber (1485/6–1539), writer, orator and patrician of Nuremberg, and mentioned by Dürer in his journal. The sketches are thought to have been made in preparation for a woodcut. 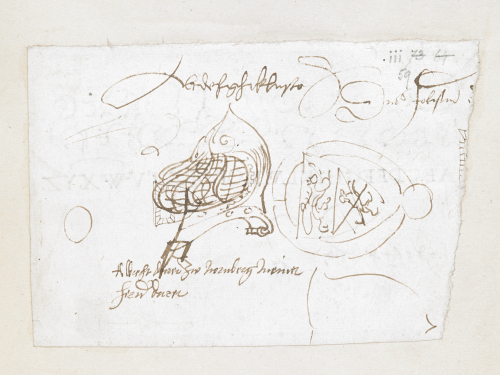 Dürer used his journal to document his itinerary, diet, expenses and earnings, and to record noteworthy sights, encounters with fellow artists, and meetings with influential individuals and patrons. The journal also mentions around 120 portrait drawings and a small number of paintings that Dürer produced and either sold or gifted during his travels. Now widely dispersed, the exhibition brings together many of these masterpieces, as well as works by some of the artists whom Dürer met and inspired on the way.

In addition to his extraordinary artistic abilities, Albrecht Dürer possessed a lifelong fascination with artistic theory. From about 1500 he became increasingly absorbed by his studies on the techniques and underlying principles of art and in particular on the correct depiction of the human body. The British Library holds four volumes of Dürer’s research notes, which relate overwhelmingly to his studies on human proportion. They contain numerous mathematically constructed drawings of men, women and children, accompanied by precise measurements and detailed notes in German on the correct construction of the human figure.

The sheet below is dated 1513 and bears Dürer’s characteristic ‘AD’ monogram. It shows a proportion drawing of a male nude with detailed measurements. Dürer has used a framework of vertical and horizontal lines to calculate the dimensions of different sections of the body as fractions of the total height of the figure. 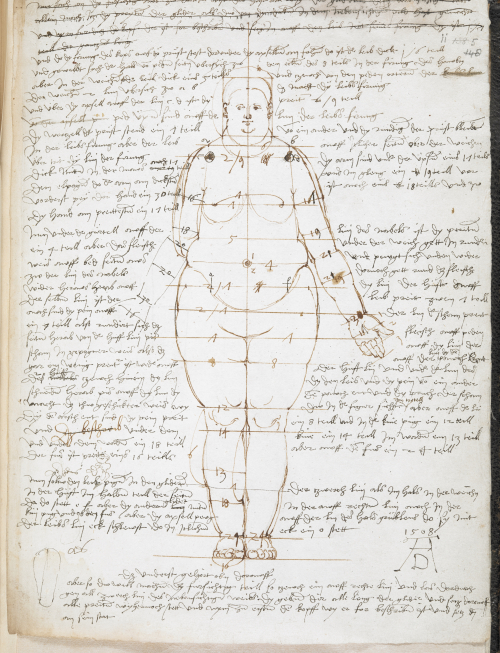 Proportion drawing of a ‘stout woman’ accompanied by measurements and step-by-step instructions in German on the correct construction of the figure: Add MS 5231, f. 5r 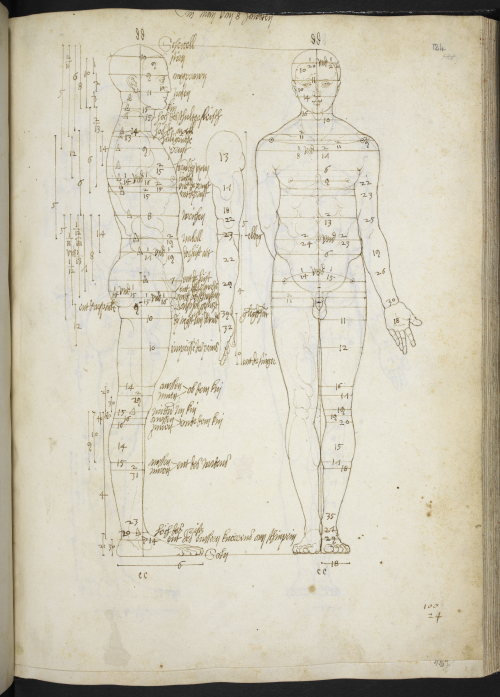 Proportion drawing of a male nude seen from the front and in profile: Add MS 5228, f. 124r 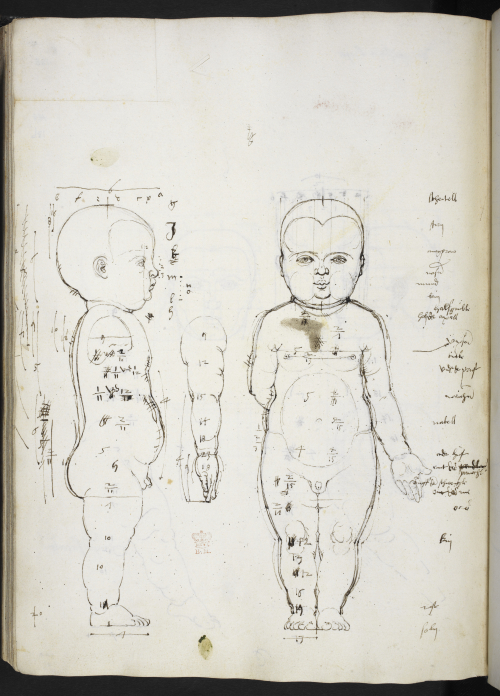 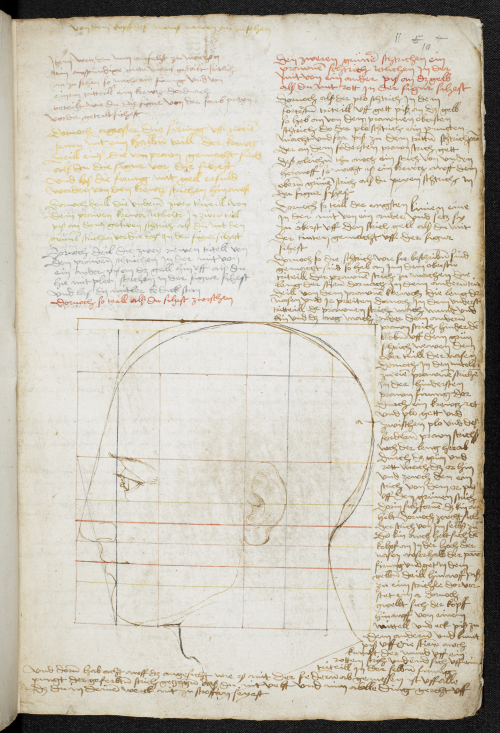 As Dürer’s sketches of fencers in combat illustrate, he was also interested in the theory of movement and how to capture the appearance and form of the body in motion. The inscriptions accompanying the rapidly executed drawings explain that they show the positions for the blades and for counter-blows or parries. 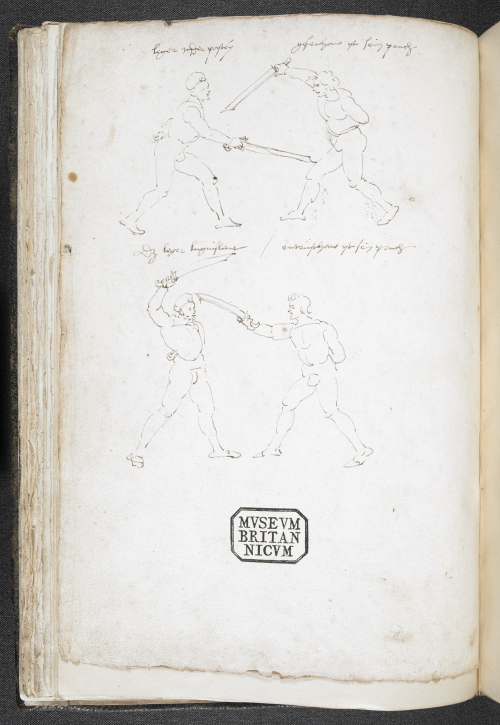 Albrecht Dürer’s extensive research, conducted over 30 years, culminated in the illustrated treatise Vier Bücher von menschlicher Proportion or ‘Four Books on Human Proportion’ which was posthumously published by his wife Agnes in Nuremberg in 1528.

One thousand years. That's how long Euro 20 seems to have been running. It's the summer when football officially came home — provided, that is, you live in Baku, St Petersburg or Budapest.

In time-honoured fashion, we have selected our European XI of the best medieval manuscripts at the British Library. We've gone for a traditional 3-2-3-1-1 formation because, quite frankly, we haven't got a clue, either. We think you'll agree that our line-up is more happy than Mbappé, less immobile than Immobile, and as apocalyptic as a Spanish defender's back pass.

When they're not representing their nation, all of these manuscripts can be viewed online on Digitised Manuscripts. 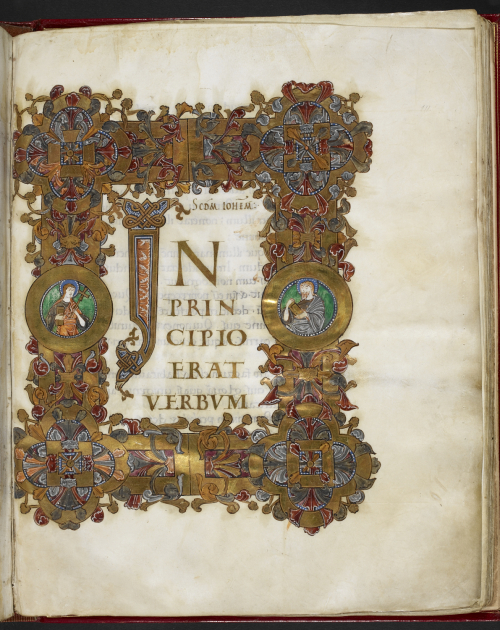 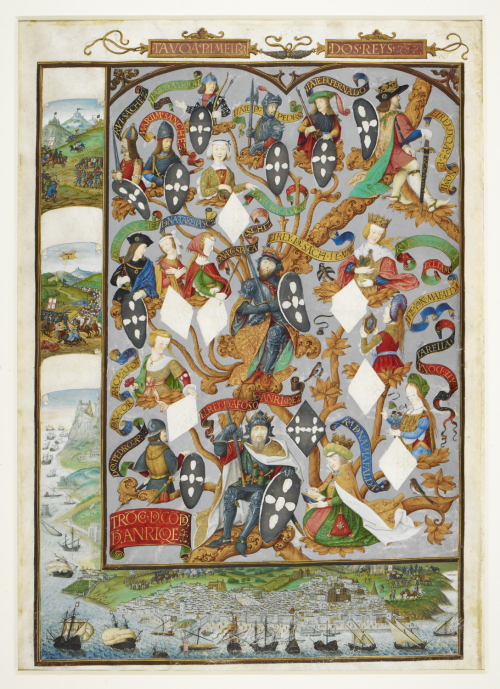 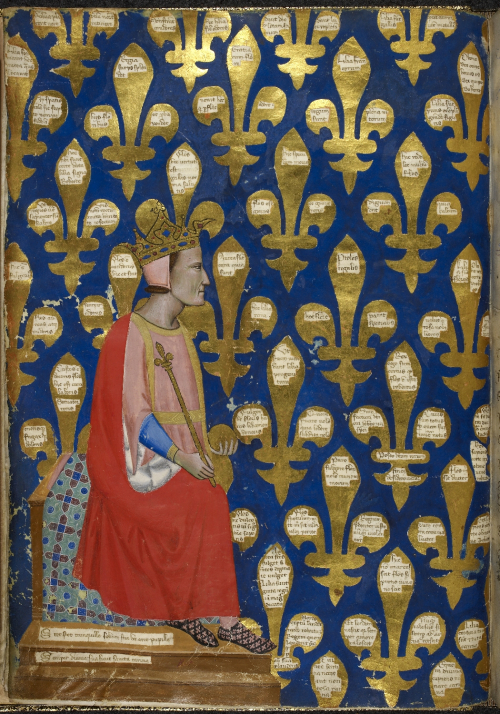 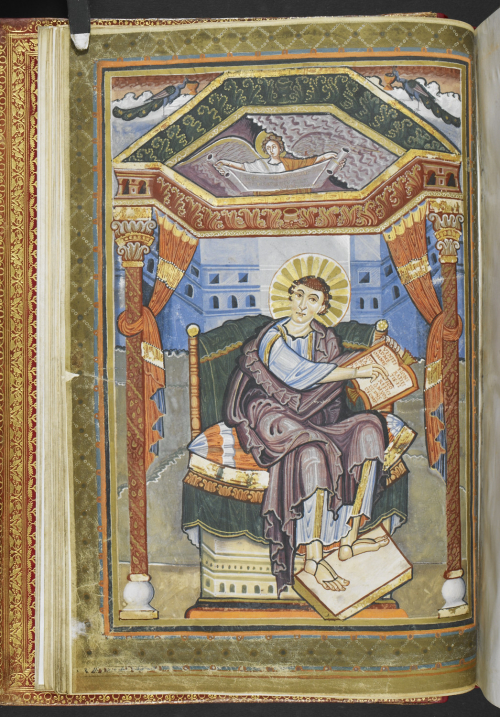 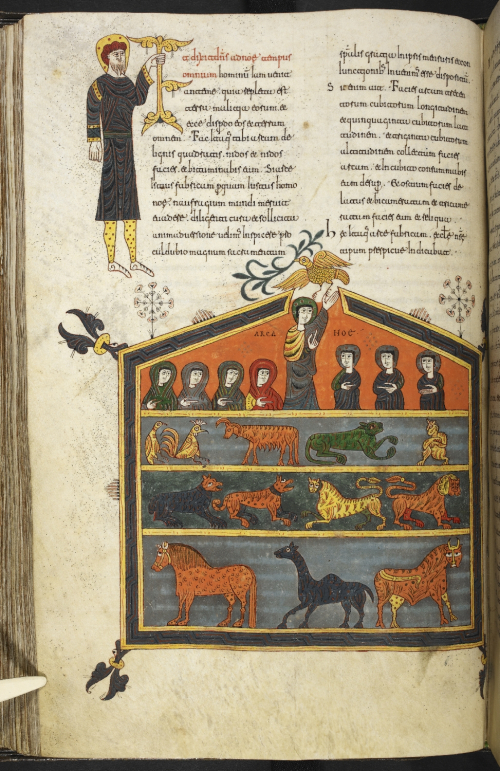 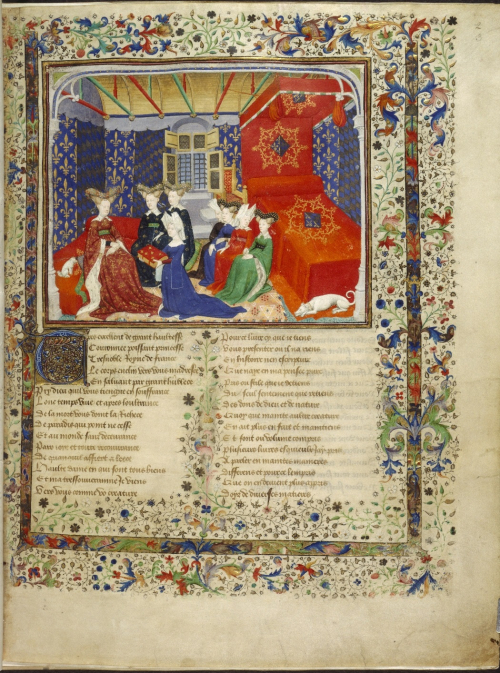 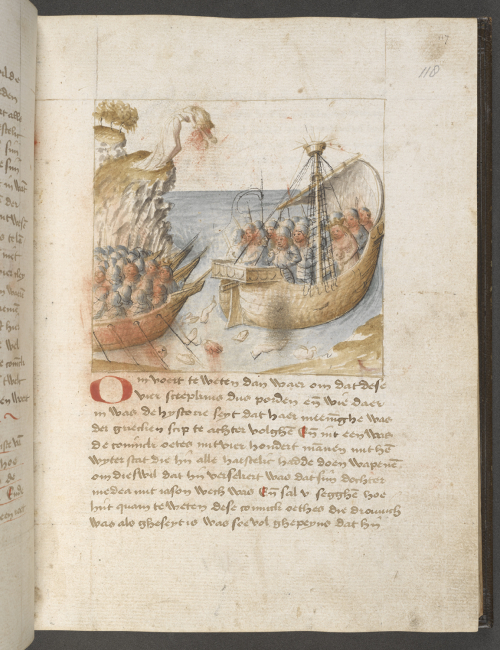 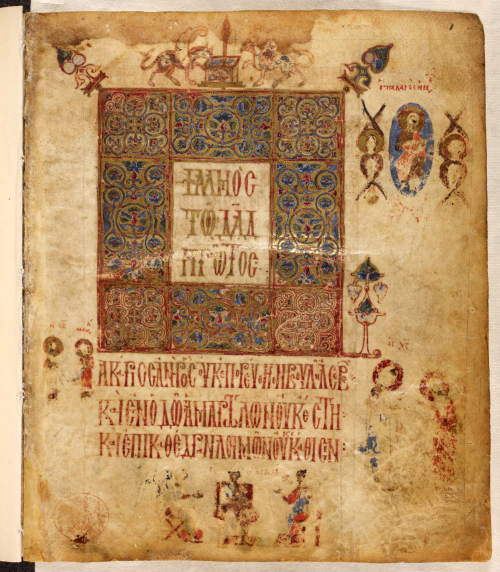 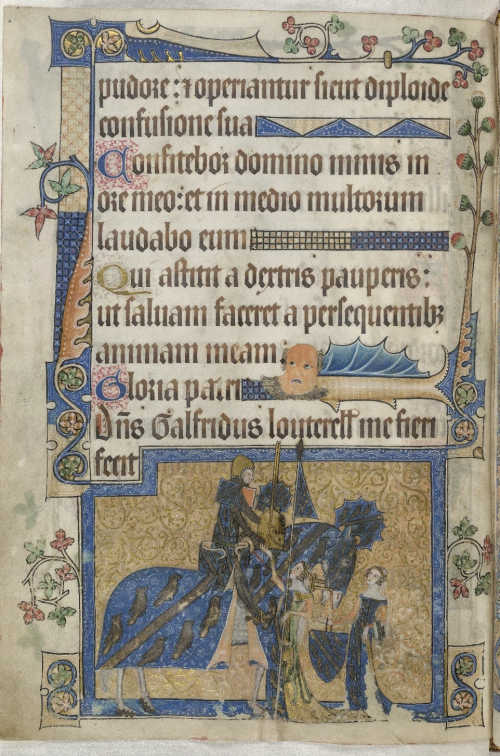 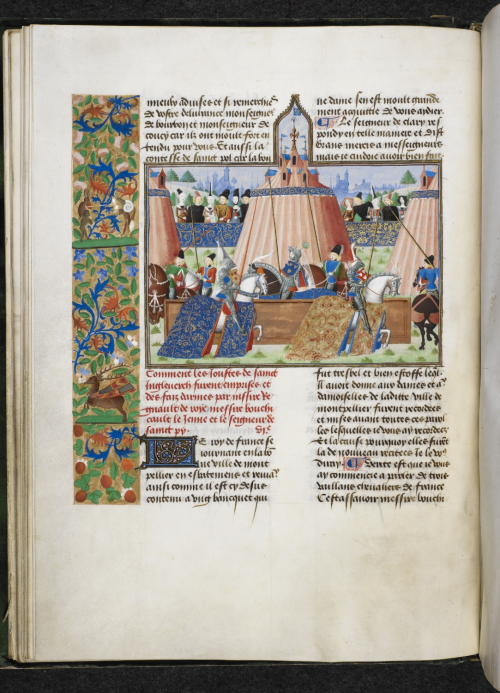 (11) The Gospels of Máel Brigte 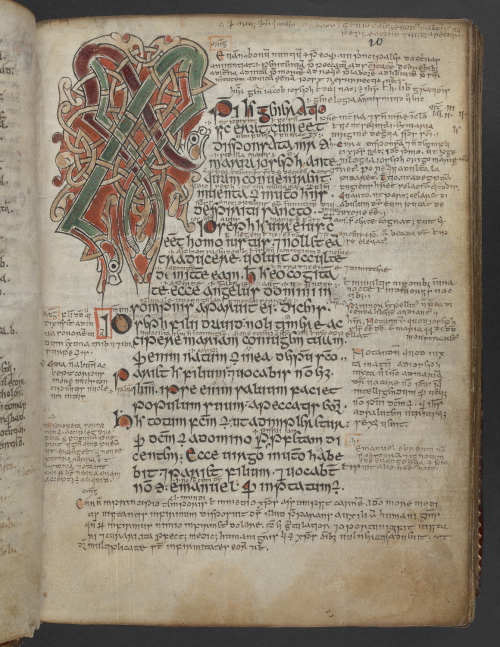 Posted by Ancient, Medieval, and Early Modern Manuscripts at 8:28 PM

The British Library and Tyne and Wear Archives and Museums are delighted to announce the loan of the Lindisfarne Gospels to the Laing Art Gallery in Newcastle for an exhibition scheduled to open in 2022. This exhibition will explore the contemporary resonance of this spectacular and justly celebrated manuscript in a range of personal, regional and national contexts, focusing on themes such as identity, creativity, learning and a sense of place.

At the same time next year, Newcastle City Library will stage a complementary exhibition. This will be accompanied by a range of public, community and school events across the North East, and a newly commissioned artwork to reimagine the Gospels for the 21st century. 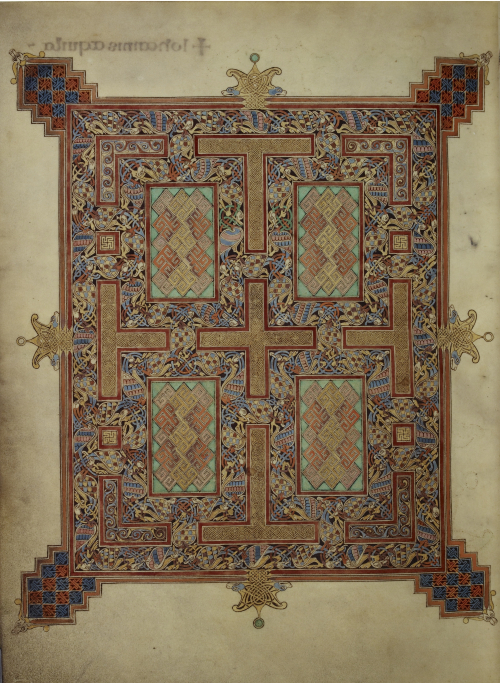 The exhibition in Newcastle will see the fifth loan of the Gospels to the North East. The manuscript was loaned to Durham Cathedral in 1987, the 1300th anniversary of the death of St Cuthbert. This was followed by two loans to the Laing Art Gallery in 1996 and 2000, and the most recent loan in 2013 to the ‘Lindisfarne Gospels Durham’ exhibition at Durham University, which generated great excitement in the region and attracted nearly 100,000 visitors. 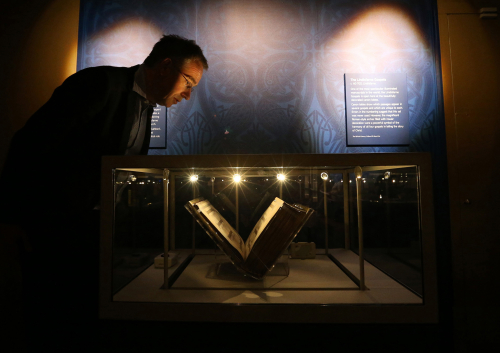 The Lindisfarne Gospels on display at Palace Green Library, Durham University, in 2013

The Lindisfarne Gospels has also featured in two recent temporary exhibitions at the British Library that focused on different aspects of the manuscript. In 2018–19, the ‘Anglo-Saxon Kingdoms’ exhibition included a spectacular display of illuminated manuscripts from the Golden Age of Northumbria. 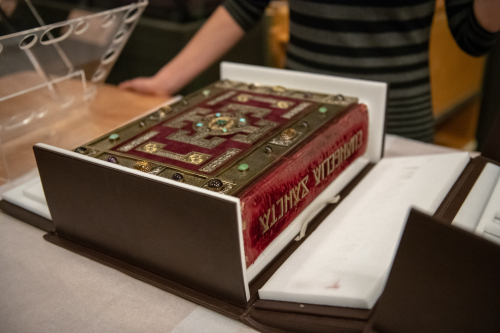 The Lindisfarne Gospels being installed in the ‘Anglo-Saxon Kingdoms’ exhibition

The Lindisfarne Gospels was displayed with the Book of Durrow on loan from Trinity College Dublin, the Echternach Gospels on loan from the Bibliothèque nationale de France, the Durham Gospels on loan from Durham Cathedral, the St Cuthbert Gospel, and Codex Amiatinus, returning to Britain from Italy for the first time in 1300 years. In contrast, in the 2019 exhibition, ‘Writing: Making Your Mark’, the beautiful Insular Half-Uncial script of the Gospels was the focus. It was displayed with other manuscripts dating from the 6th to the 15th centuries to illustrate the many different scripts used during the Middle Ages for the Roman alphabet. 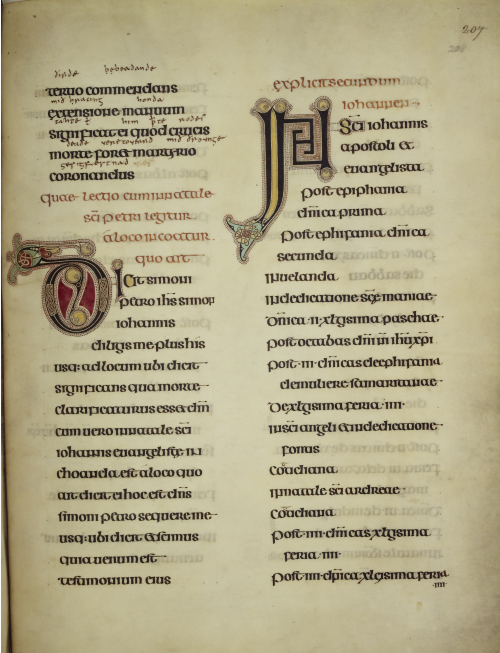 Although the British Library's physical sites are currently closed to the public, when we are able to reopen our exhibitions the Lindisfarne Gospels will be on display again in the Sir John Ritblat Treasures Gallery alongside other highlights from the national collection. So we look forward both to sharing the Gospels in the Treasures Gallery later this year, and to the loan of Gospels to Newcastle next year. In the meantime, you can find out more about the Lindisfarne Gospels on our website and explore all the pages of the manuscript in detail on Digitised Manuscripts. 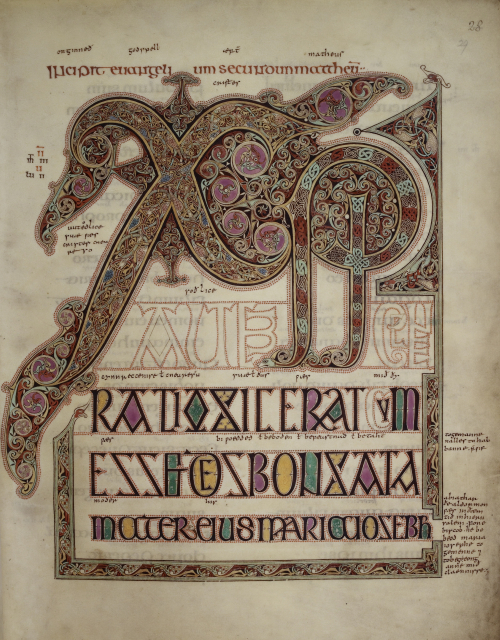 Posted by Ancient, Medieval, and Early Modern Manuscripts at 10:38 AM