Manuscripts are hot in the fashion world right now! Attendees of the 2018 Met Gala drew inspiration from medieval manuscripts. The actor Ezra Miller recently caused a stir at the UK premi√®re of the new Fantastic beasts film (was it inspired by this manuscript in our Harry Potter exhibition?). And this September, the British Library itself hosted a London Fashion Week event: Nabil Nayal‚Äôs presentation of his Spring 2019 collection.

Dr Nayal is no stranger to the Library. He did his research here for his PhD in Elizabethan dress, and Elizabeth I and the British Library‚Äôs manuscripts were major inspirations for his recent collection. As he said at the launch, he hoped his collection will inspire modern women to ‚Äòstand up for what you believe and be your true self, unleash your inner queen‚Äô.

Here are the stories of just a few of the manuscripts that inspired Nabil Nayal. 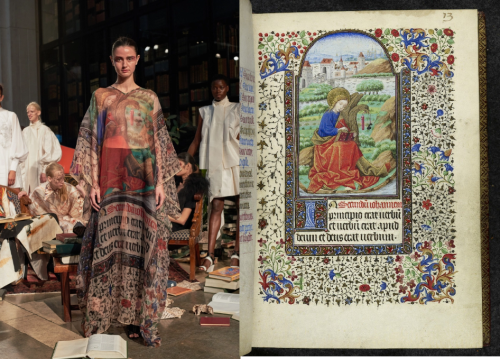 One of the earliest manuscripts that was featured in Nayal's collection was a Book of Hours made in Paris around the 1450s. This manuscript was possibly made for a woman: a prayer on f. 20v uses the female form 'famule tue' (‚Äòyour female servant‚Äô), although a prayer a few pages later uses the common masculine form 'miserrimo paccatori' (‚Äòmost miserable sinner‚Äô). The fine illuminations have been associated with the workshop that produced the Bedford Hours. Nayal‚Äôs dress is based on a page that shows St John the Evangelist writing while in exile on Patmos. 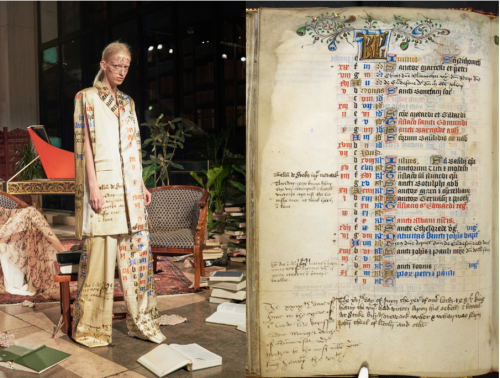 Nabil Nayal SS19 dress and a page from the calendar in the Beaufort Hours: Royal MS 2 A XVIII, f. 30v

Meanwhile, Nayal transformed a calendar owned by Margaret Beaufort into a chic suit. The suit is based on the page for June. Notes in the margin record victories won by Margaret‚Äôs son, Henry VII, at the battles of Blackheath and Stoke. These notes were not made by Margaret herself ‚Äî she had dreadful handwriting ‚Äî but were probably added by members of her household. There are also notes on the birth of her grandson, the future King Henry VIII, on 28 June. A later hand has added a note about Margaret‚Äôs own death on 29 June 1509. We love the way Nabil Nayal laid out the jacket so that one side is dominated by the Gothic script of a fine scribe working in the first half of the 15th century, while the other side has the quicker, cursive scripts of the added notes from the late 15th and early 16th century. 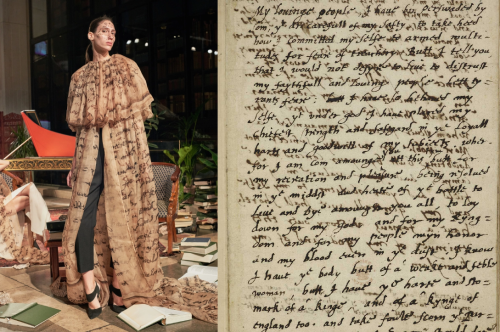 Nabil Nayal SS19 outfit and a page from the Tilbury Speech: Harley MS 6798

The manuscript that inspired the most outfits was Harley MS 6798. It records the Tilbury Speech, which Queen Elizabeth I supposedly delivered in 1588 at Tilbury Camp ahead of the defeat of the Spanish Armada. It includes such memorable lines as 'Let tyrants fear!' and 'I know I have the body but of a weak and feeble woman; but I have the heart and stomach of a king, and of a king of England too, and think foul scorn that Parma or Spain, or any prince of Europe, should dare to invade the borders of my realm ‚Ä¶' You can read the whole speech here.

Nayal has said he used this manuscript repeatedly in his collection because it ‚Äòwas so important for me to remind people of this speech. It's the moment she revealed herself to be a strong, defiant woman who was going to overcome the obstacles she faced.' 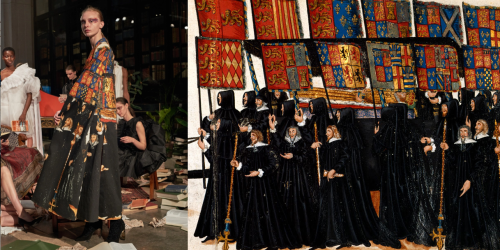 Nabil Nayal SS19 coat, that has both a similar design to garments worn in depictions of Elizabeth I's funeral and also reproduces a contemporary image of part of Elizabeth's funeral procession: Add MS 35324

Elizabeth I remained in remarkably good health into old age, but even the most powerful of queens had to contend with mortality. Depressed after the death of her second cousin and chief gentlewoman of the privy chamber, Katherine Howard, countess of Nottingham, Elizabeth stopped eating and lost the ability to speak. She died in the early of hours of 24 March 1603 at Richmond Palace in Surrey. Her funeral took place at Westminster Abbey on 28 April. The total cost of her funeral and burial was about ¬£3,000.

Nayal‚Äôs collection included a coat inspired by drawings of Elizabeth I‚Äôs elaborate funeral procession, now in Add MS 35324. The coat features the part of the manuscript that depicts Elizabeth‚Äôs coffin draped in purple velvet, carried by six knights and surrounded by twelve barons, who bore banners displaying her pedigree. Atop the coffin is her funeral effigy, constructed of wax, wood and straw, which in turn was based on her death mask. She wore her parliament robes, with a crown on her head and a sceptre in her hand. We can get a sense of what that effigy looked like from other sources. Between 1605-7 her successor, James I, employed the Frenchman Maximilian Colt to construct Elizabeth a tomb and effigy at a cost of ¬£965. The effigy in white marble was based on her funeral effigy, which survived until the mid-18th-century, when a reconstruction was made (still housed at Westminster Abbey). The original corset worn by the effigy also survives, and was probably one worn by the queen in life.

If you're feeling inspired, the British Library has launched a new Fashion web resource. In collaboration with the British Fashion Council and its Council of Colleges, we hope to encourage design students to use our unique collections.

Some of the most interesting texts in the British Library‚Äôs collections have deceptively unassuming appearances. For example, this fragile piece of parchment is the closest equivalent of the Vogue wardrobe for early medieval England. Written in Old English, it is one of the earliest wills which survive from England in the name of a woman only. It details bequests made by a noblewoman called Wynfl√¶d sometime before the late 10th or early 11th century, and it describes her wardrobe as well as her estates, slaves, metalwork, livestock and familial relationships.

We can‚Äôt be sure as to Wynfl√¶d's exact identity. One of King Edgar‚Äôs grandmothers was called Wynfl√¶d, but this will could pertain to someone else with the same name. What we do know is that our Wynflaed was a widow, and that she had a daughter called √Üthelfl√¶d and a son called Eadmer. We also know that she was rich. Her will mentions several estates, bands of tamed and untamed horses, slaves, many coins, livestock, items in gold and silver, and even books (annoyingly for us, no further information is given). The compiler of her will described some of the other items, such as Wynfl√¶d's ‚Äòwooden cups decorated with dots‚Äô and her ‚Äòred tent‚Äô. Anglo-Saxon nobles often travelled around ‚Äî Wynfl√¶d may have had to travel to manage her estates ‚Äî and they stayed in tents when doing so. The Durham Collectar, for instance (Durham Cathedral Library MS A.IV.19), mentions that some of its text was written before tierce (around 9 a.m.) on Wednesday, 10 August 10, ‚Äòfor √Ülfsige the bishop [of the community of St Cuthbert] in his tent‚Äô while he was travelling in Dorset.

Wynfl√¶d's will also gives details about her attire, from her engraved bracelet to linen gowns to caps and headbands. Such detailed descriptions of clothes are relatively unusual in Old English texts. A particularly striking item among Wynfl√¶d‚Äôs clothes is a ‚Äòtwilibrocenan cyrtel‚Äô. This garment has been alternatively interpreted as a ‚Äòbadger-skin dress‚Äô, an embroidered dress or even a dress that was only worn twice. Gale Owen-Crocker and Kate Thomas have already discussed Wynfl√¶d‚Äôs clothes, if you‚Äôd like to learn more. 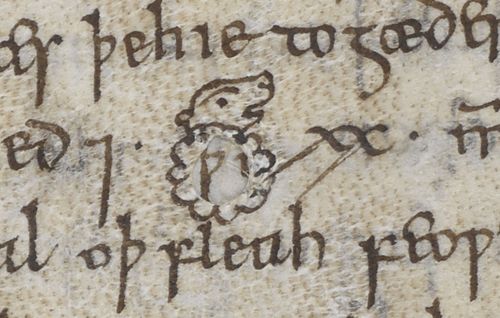 A badger? Detail of a decoration around a flaw in parchment, from the Tollemache Orosius, England (Winchester?), late 9th or early 10th century: Add MS 47967, f. 62v

Wynfl√¶d may have taken religious vows towards the end of her life, but that does not seem to have impeded her fashion sense. Her will mentions a ‚Äòholy veil‚Äô and at the beginning it focuses on her donations to an unspecified church. This church seems to have housed women, since the first part of the will also specifies bequests to ‚Äòslaves of God‚Äô there with female names such as Ceolthryth, Othelbriht and Elsa. At least one of these names appears again towards the end of the will as the recipient of some of the finer pieces in Wynfl√¶d's wardrobe: Ceolthryth was to receive ‚Äòwhichever she prefers of her black tunics and her best holy veil and best headband‚Äô (translated by D. Whitelock, Anglo-Saxon Wills, Cambridge, 1930, p. 15). Nor were these the only fashionable religious women or nuns in late 10th-century England, if later stories about St Edith are to be believed. 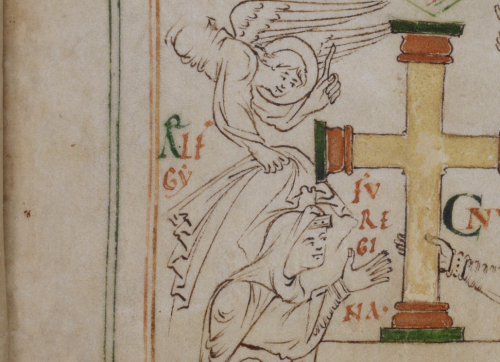 Wynfl√¶d‚Äôs will highlights another important aspect of fashion history: who made the clothes. Wynfl√¶d not only bequeathed her clothes to her relatives, but she also bequeathed the people who made them. To Eadgifu (possibly her granddaughter), she gave ‚Äòa woman-weaver and a seamstress, the one [also] called Eadgifu, the other called √Üthelgifu‚Äô. One gets the impression that her granddaughter Eadgifu was a favourite: she also received the ‚Äòbest bed-curtain‚Äô, ‚Äòbest dun tunic‚Äô, best cloak and an ‚Äòold filigree brooch‚Äô, among other objects.

Eadgifu the weaver and √Üthelgifu the seamstress were not so lucky. While Wynfl√¶d freed some of her slaves in her will, these two may have been condemned by their skill. They are two of only four slaves whose professions are specified in the will, the others being a wright and a cook called √Ülfsige. Wynfl√¶d was ‚Äî and is ‚Äî not alone in exploiting garment makers. To this day, the fashion industry has an uncomfortably close relationship with exploitation and poor labour conditions in many parts of the world.

Although Cotton Ch VIII 38 is a copy of the original will, it shows signs of how such a document might have been used.  It is a single sheet, folded carefully in half, then lengthways, and then again into thirds, as if it has been used and been put away for safe keeping.  The interlinear additions to the text are also intriguing: as these are meaningful pieces of text, rather than occasional words, they are clearly not just the result of scribal error, but were intended as clarifications, or to add extra information.  For example, when Wynflaed bequeaths her cloak, an extra word is added to specify which one: it is 'hyre beteran mentel' (her better cloak).  Many of these additions are concerned with what would happen to Wynflaed's slaves.  The will specifies that 'at Faccombe Eadhelm and Man and Johanna and Sprow and his wife ‚Ä¶ and Gersand and Snel are to be freed,' with Sprow and his wife added between the lines; while elsewhere, where 'aelfferes dohtor' (Aelffere's daughter) is given to Aethelflaed, someone has added '√æa geonran' (the younger) between the lines, specifying which one of his daughters was to be Aethelflaed's slave.  Needless to say, these additions had serious consequences for the futures of Sprow, his wife, and of Aelffere's daughter. 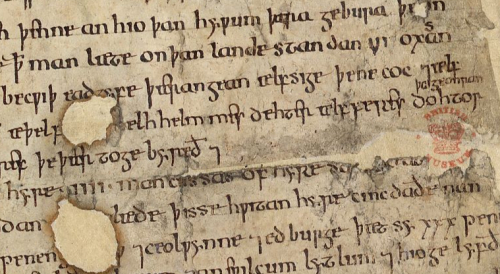