We are thrilled to let our readers know that Pierre Sala’s Petit Livre d’Amour is currently on display in the exhibition Lyon Renaissance Arts et Humanisme at the Musée des Beaux-Arts de Lyon. From now until 25 January 2016, you can explore a collection of almost 300 artistic works produced in 16th-century Lyons, a city regarded in this period as the ‘deuxième œil de France’ (second eye of France) and the ‘clef du royaume’ (key of the kingdom). This short video brings to life a selection of the items on display, from illuminated books to embroidered silk.

Pierre Sala (b. 1457, d. 1529) is one of the leading Lyonnais figures from this period. As well as serving both Charles VIII and Louis XII of France, he was a notable humanist and poet. However, the manuscript on loan concerns his personal rather than public allegiances. 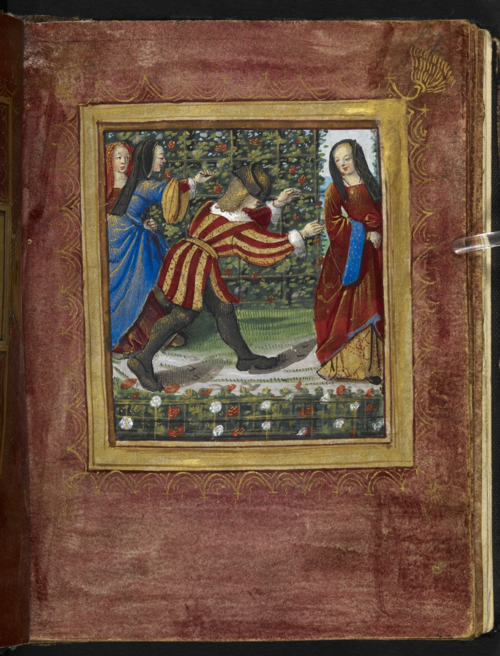 Despite measuring only 13 centimetres high, Pierre Sala’s Petit Livre d’Amour makes a big impression. You might remember this sumptuous little book from a special Valentine’s Day edition of the blog published a few years ago. Through a carefully compiled collection of quatrains with complementary illustrations, Pierre Sala makes a statement of his love for mistress Marguerite Bullioud. The discrete openings evocatively appeal to the reader, sometimes in more subtle ways than others.

In the opening dedication, he underlines the combined purpose of the words and images and their intended effects on his lover:

(image and word are the two routes by which one is able to enter the house of memory, for images serve the eye and words [serve] the ear and make a thing of the past appear as if it were present) 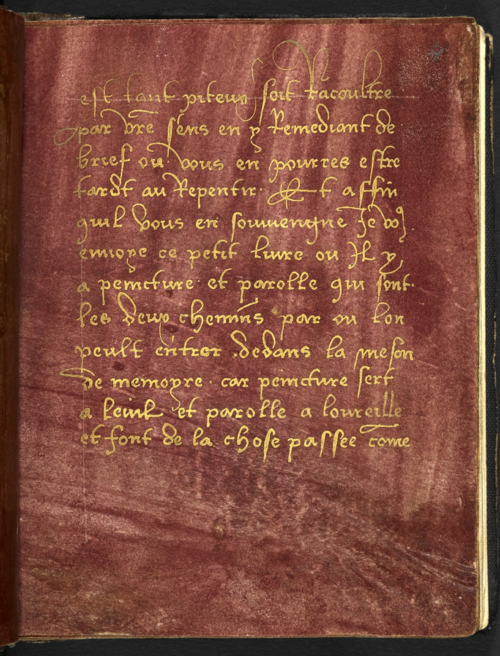 This intriguing book also provides an exceptional witness of the work of Pierre Sala’s friend Jean Perréal. Another key figure active in 16th-century Lyons, this artist in the service of the French royal court is most famous for his portraiture. Whilst Jean Perréal is not responsible for the other miniatures in Stowe MS 955, who else would Pierre choose to paint his likeness in a book intended for his lover?! This dashing portrait certainly did the trick – Marguerite eventually became his second wife! 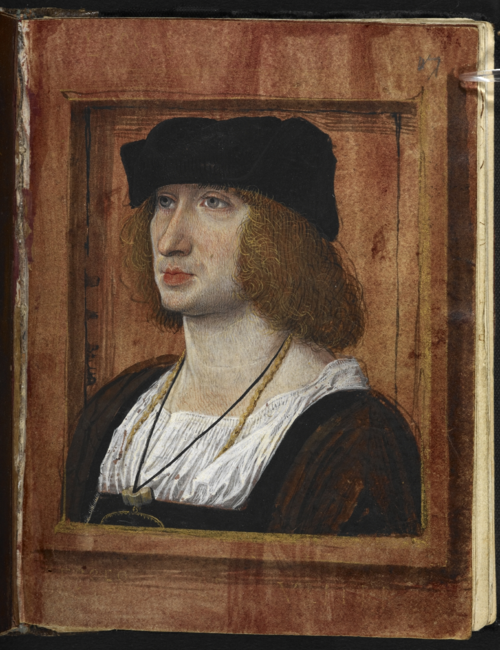 You can see Jean Perréal’s portrait of Pierre Sala in the Petit Livre d'Amour at Lyon Renaissance Arts et Humanisme until 25 January 2016.