Elizabeth Elstob (1683–1758) is considered to be the first female scholar of Old English and one of the earliest advocates of women’s education. She was supported in her scholarly pursuits by Robert Harley (1661–1724), 1st Earl of Oxford and Earl Mortimer, the founder of the Harley collection, and his Library-Keeper Humfrey Wanley (1672–1726), another renowned scholar of Old English.

The youngest of eight siblings born to a merchant family in Newcastle-upon-Tyne, Elizabeth initially received private education under her mother’s tutelage. When her mother died in 1691, she was sent to her uncle Charles Elstob, Prebendary of Canterbury, who was opposed to the education of women. Despite his disapproval, Elizabeth began studying ancient and modern languages. She subsequently moved in with her brother William, a clergyman and scholar in Oxford, who introduced her to the leading Old English scholars of their day. In 1702, they moved to London where she began publishing major works on the Old English language. 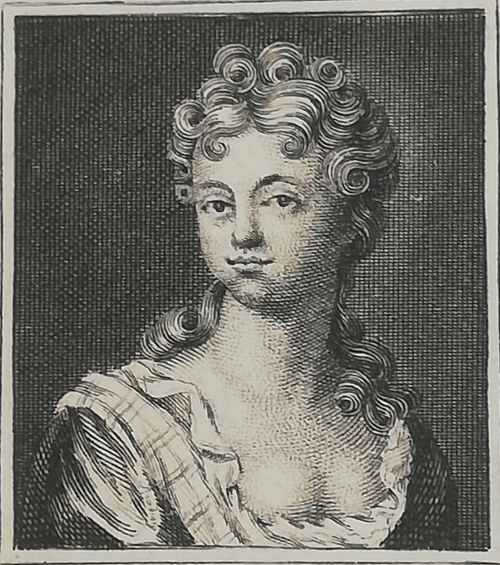 Among Elizabeth’s publications were an edition of the Latin Athanasian Creed with an Old English interlinear gloss (1708); an edition and translation of the Old English Life of Pope Gregory the Great by the Benedictine monk Ælfric of Eynsham (1709); and The Rudiments of Grammar for the English-Saxon Tongue (1715). The latter was the first grammar of Old English published in modern English. Up to that point, scholarship on Old English had been mostly in Latin, so this was an important publication for making the study of Old English more accessible to students and amateur female scholars alike. While preparing a complete edition of Ælfric’s Homilies, she worked with her brother William on his editions of the Old English adaptation of Orosius’s History of the World and Old English legal texts.

The initials of William Elstob and Elizabeth Elstob from a transcript of Textus Roffensis which they collated with the original manuscript in 1712: Stowe MS 960, f. 3r

During her career, Elizabeth received the support of Robert Harley at a time when he practically was Prime Minister and enjoyed great proximity to Queen Anne (1665–1714). On two occasions, she petitioned Harley for financial support from Queen Anne in order to publishing her edition of Ælfric’s Homilies. She was successful in her second attempt, as evidenced from a letter in which she thanked him ‘for so great a Favour’. 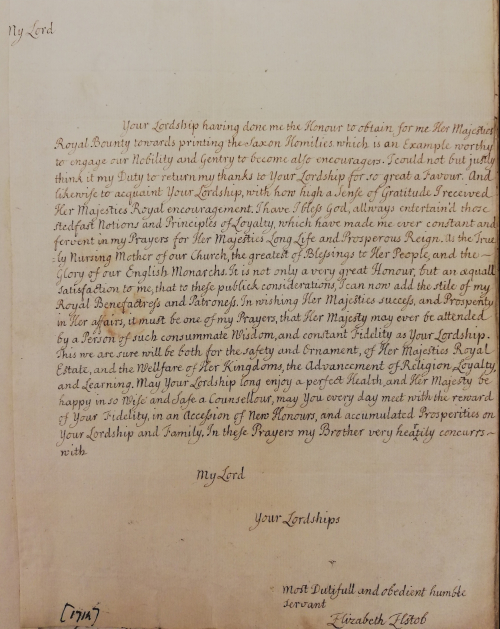 During her career, Elizabeth was in close contact with Humfrey Wanley, Library-Keeper of the Harleian collection. Aside from consulting manuscripts herself at the Bodleian Library and the Cottonian Library, she made ample use of Wanley’s catalogue of Old English manuscripts that he had published in 1705 with the support of Robert Harley. Her respect for his work is clear from a letter dated 1709, in which she explained that she abandoned her plan to make an edition of the Psalms in Old English after learning that Wanley was already working on an edition of the Bible in Old English:

‘I had a design upon the Psalms, but since that, Mr. Wanley tells me he is preparing the whole Bible: of which the Psalms make a part, I cannot allow myself to interfere with so excellent a person, tho’ he has been so generous as to offer me, all the assistance he can give’

Wanley also greatly valued Elizabeth’s scholarly work. He transcribed a manuscript at Trinity Hall, Cambridge, for her publication on the Old English Life of St Gregory, and he incorporated a number of her works into the Harleian Library. Elizabeth sent him a genealogy of the Elstob family to the year 1710, and a separate descent of her mother’s family, which traced her ancestry back to Brochwel Ysgithrog, a 6th-century king of Powys. Wanley was clearly impressed with the genealogies that she had expanded by researching and citing Old English and Latin sources. He inserted them into a 17th-century manuscript with pedigrees from the Palatinate of Durham; in cataloguing the manuscript, he attributed them to ‘that ingenious virgin gentlewoman Mrs Elstob’ (A Catalogue of the Harleian Manuscripts in the British Museum, London, 1808–12), II, p. 29). 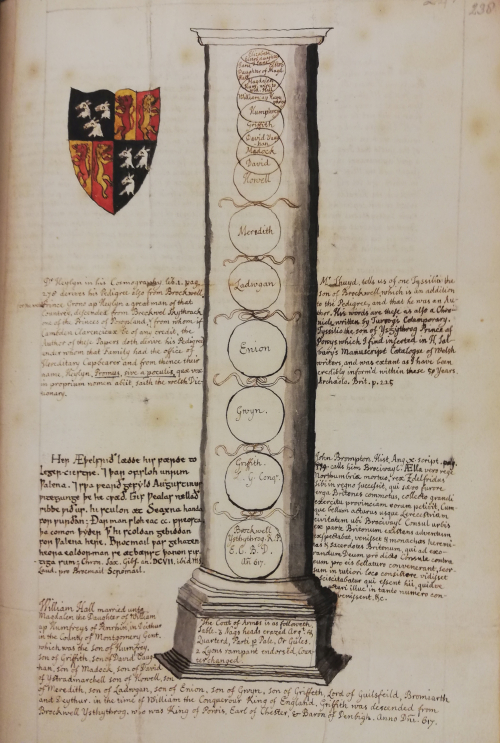 The ancestry of Elizabeth Elstob’s mother Jane Hall, drawn up by her for Humfrey Wanley: Harley MS 1397, f. 238r

Wanley also expressed his appreciation when, in 1712, Elizabeth presented him a facsimile reproduction on parchment of an early 12th-century manuscript containing the 'Annals of Rochester' (Textus Roffensis), an important source for the study of law in early medieval England. Wanley paid her five guineas and catalogued the manuscript, noting that 'Mrs Elstob hath finely imitated the Hand-writing of the [...] Textus Roffensis' (Catalogue of the Harleian Manuscripts, II, p. 272). The Harleian Library also obtained a second parchment manuscript with a facsimile of Textus Roffensis written and decorated by Elizabeth Elstob. 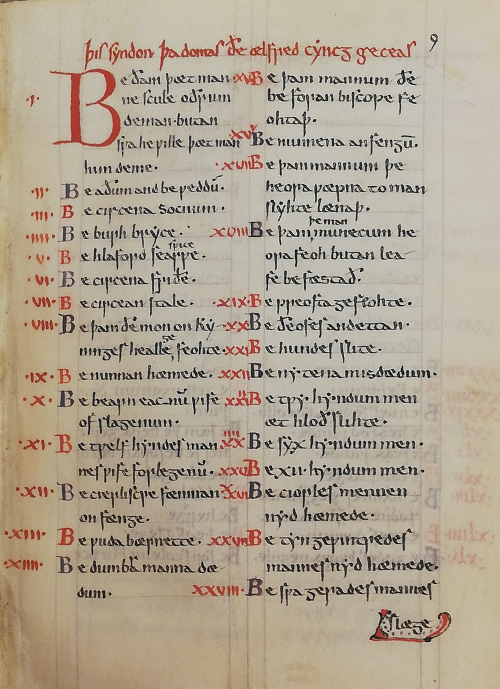 In 1715, Elizabeth’s scholarly career came to an abrupt end when her brother died suddenly. She was left with financial debts from their joint publishing projects and without any support, since Queen Anne had died before sending her the funding secured by Robert Harley. Perhaps in an attempt to flee her creditors, Elizabeth left London for Evesham (Worcestershire) where she lived in relative anonymity as a teacher at an elementary school for girls. She never returned to her scholarship and left her magnum opus, the complete edition of Ælfric’s Homilies, unfinished: her manuscript volumes survive at the British Library as Lansdowne MSS 370–374 and Egerton MS 838. However, Elizabeth Elstob did remain attached to the Harley collection in some small way. From 1739 until her death in 1758, she was governess to the children of Margaret Cavendish Bentinck (1715–1785), duchess of Portland, who, as granddaughter of Robert Harley, had inherited the Harley collection. Perhaps Elizabeth felt some comfort in returning to the family who had supported her scholarly pursuits, and whose collection, formed under her friend Wanley's direction, preserved her work.

Queen Elizabeth I (r. 1558–1603) amassed an extraordinary collection of objects made from and decorated with gold, silver and precious stones, as demonstrated by two inventories that were drawn up during her lifetime. Aside from the regalia that she inherited from her predecessors — such as the imperial crown, sceptre and orb — she received many personalised jewels from her courtiers at the customary presentation of gifts to the queen on New Year’s Day. Very few of these precious objects survive today: her successors James I and Charles I sold or donated her jewels, while the regalia were destroyed after the abolition of the monarchy in 1649.

Luckily, the inventories (Stowe MS 555 and Stowe MS 556) give us detailed descriptions of the more than 1.500 items that were kept in the Jewel House at the Tower of London. These suggest that Elizabeth surrounded herself with objects and imagery that celebrated female leadership and virtue, supporting her unusual position of being only England’s second ruling queen and the first who chose to remain unmarried: a controversial choice since queens were expected to marry in order to create political allegiances, to acquire a husband to handle military affairs, and to produce offspring. 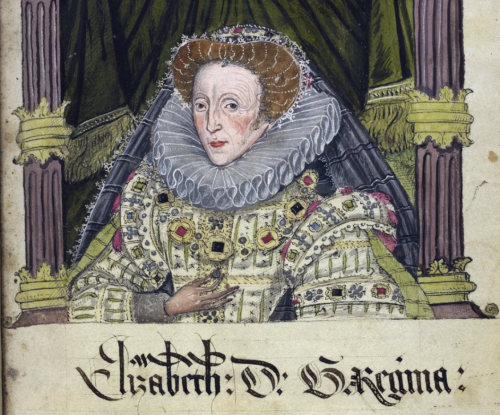 One of the very few items from the inventories that survives today is the so-called ‘Royal Gold Cup’. The cup is covered in gold, adorned with pearls, and enamelled with scenes from the life of St Agnes, an early Christian who was martyred during the Roman persecution. It was made for the French royal family at the end of the 14th century, but was in the possession of the Tudor monarchy by 1521. As a Protestant, Elizabeth opposed the cult of saints, but the life of St Agnes may have resonated with her on a secular level: like Elizabeth, Agnes rejected a range of suitors and committed herself to a life of virginity. 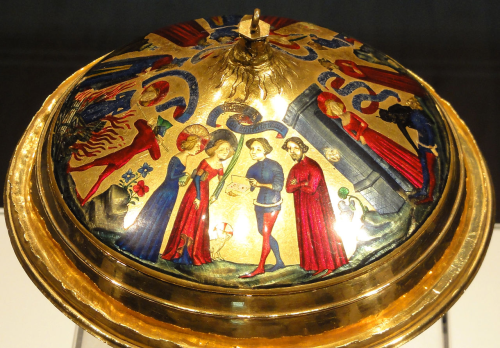 St Agnes, accompanied by her foster-sister St Emerentiana, rejecting a casket of jewels from her suitor Procopius on the cover of the Royal Gold Cup, London, British Museum (image by Fæ / Wikimedia Commons / CC-BY-SA-3.0)

Elizabeth may have used jewels made from the horn of the unicorn (in reality, narwhal tusk or walrus ivory) to celebrate her unmarried status. The popular belief that the mythical creature could only be captured by a virgin may have made its horn a particularly useful symbol for Elizabeth to reinforce her status as ‘Virgin Queen’. We recently mentioned that she owned a drinking cup made from unicorn’s horn, but our inventories show that she possessed much greater quantities of it. They itemize an unadorned piece of unicorn’s horn (‘pece of unicornes horne not garnished’), a staff from unicorn’s horn featuring a silver-gilt cross with a round crystal (‘Staffe of unycornes horne with a Crosse garnished with silver guylte and a rounde Chyrstall’), and another staff that was made from unicorn’s horn (or bone), adorned with silver, and featuring Elizabeth’s coat of arms.

Elizabeth’s jewels suggest that she associated herself with Lucretia, a noblewoman from ancient Rome who committed suicide after she had been raped by an Etruscan prince. During the Middle Ages, Lucretia was cited as a paragon of female virtue by authors such as Giovanni Boccaccio (1313–1375) in his De claris mulieribus (Concerning Famous Women), Cristine de Pizan (1364– c.1430) in her Le Livre de la Cité des Dames (The Book of the City of Ladies), and Geoffrey Chaucer (c. 1340–1400) in his Legend of Good Women. Elizabeth owned a ewer engraved with an image of ‘Lucrece kylling herself’, two gilt cups with her image, and a wooden cup which may have depicted her suicide, since it is described as having ‘a woman holding a dagger two edged in her handes’.

Other jewels supported Elizabeth’s status as England’s sole leader through images of virgin goddesses from Classical mythology. For example, the inventories describe a salt vessel (‘Saulte’) that was shaped like a golden globe and was held up by two figures representing the Roman god Jupiter and his daughter Minerva. Elizabeth received it on New Year's Day 1583/4 from Francis Drake (1540–1596), who presented her with many gifts he had raided from Spanish and Portuguese ships. While the globe symbolises England’s imperial aspirations, Minerva, Roman virgin goddess of warfare and defender of the state, was strongly associated with Elizabeth, who was likened by her contemporaries  to a ‘new Minerva’.

Among the inventories, we find one jewel that seems to reflect on Elizabeth’s leadership in a bold and humorous way. It is a dish described as having an engraving of a ‘woman syttinge uppon a man holdinge a whippe in her righte hande and holdinge his heade in her lefte hande’. This unmistakably represents the late medieval tale of Phyllis and Aristotle. The story tells that after Alexander the Great took Phyllis as his wife, he became distracted from state affairs. His mind was turned back to his kingdom and away from his wife when the Greek philosopher Aristotle remonstrated with him. When Phyllis learned the cause of her husband’s changed attitude, she decided to take revenge: she seduced Aristotle and, after he begged her to requite his love, she agreed to do so on condition that he first allowed her to ride upon his back like a horse. The story of Phyllis and Aristotle was part of a ‘Power of Women’ trope in late medieval and early modern art and literature that reflected anxieties over women’s dominance over men. But for Elizabeth it may have been an example of succesful female governance and therefore fitted in well with the rest of her collection. 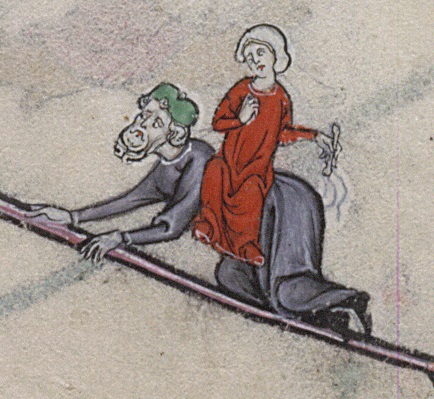 Elizabeth’s jewels played an important role in how she represented herself to the outside world and was perceived by others. Our inventories suggest that her courtiers were aware of their function and carefully selected jewels or had ones made that emphasised her identification with illustrious women and virgin goddesses. These strategically designed jewels were powerful symbols that helped Elizabeth promote the idea of single leadership in England by an unmarried woman.

From golden toothpicks to drinking vessels made from griffin’s eggs, you can now study the newly digitised versions of Stowe MS 555 and Stowe MS 556 on our Digitised Manuscripts website.