Records of the African diaspora in Matanzas, Cuba

In 2007 Britain marked the 200th anniversary of the abolition of the transatlantic slave trade. The same year saw the completion of the following EAP project: Pilot Project to Identify Endangered African Diaspora Collections at the Major Archives of the Province of Matanzas, Cuba.

Slavery wasn't legally abolished in Cuba until 1886. In colonial Cuba, the Province of Matanzas was an important centre for sugar production and thus a major destination for African slaves. The office of the Governor of Matanzas was responsible for regulating the slave trade and for supervising, or administering, issues relating to slavery. The Governor's office thus created and kept records documenting the activities of slaves, slave traders and slave owners.

These records cover topics such as slave revolts, runaways, the arrival of ships carrying slaves (both legally and illegally) and abolition. Some of the correspondence includes:

Communication of the Matanzas Governor on a runaway slave found dead inside an empty house, May 1816 (EAP060/1/1/10)

Communications to Matanzas' Governor on measures to eradicate the African slave trade in Cuba, April 1826 (EAP060/1/1/26)

Draft of a communication to the Captain of Ceiba Mocha on two horses abandoned by two runaway slaves, June 1838 (EAP060/1/2/61)

Communication to Matanzas' Governor on the dissolution of a police battalion that failed to prevent slave revolts, July 1837 (EAP060/1/3/11)

Here is a page from a communication by the Matanzas' Medical Officer noting that African slaves landed in Matanzas have been vaccinated (EAP060/1/1/19): 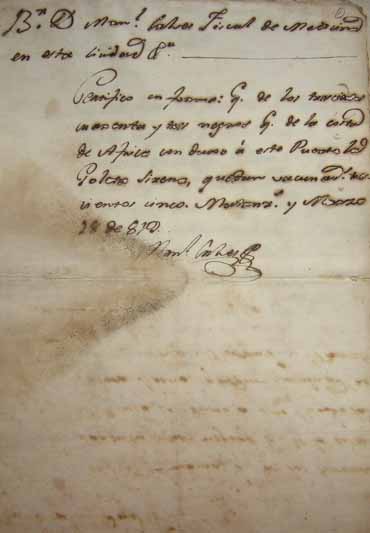 The project also copied registers of births, death and marriages for "blacks and coloured peoples" kept by the Matanzas Cathedral. These registers show how Cuban society divided itself according to colour and ethnic origin. The Cathedral organised its registers into three categories: Blancos (Whites), Indios (Natives) and Pardos y Morenos (Blacks). The project copied those registers recording births, deaths and marriages for the Pardos y Morenos.

The outcome of the project, including a full catalogue, can be found on the EAP webpages.

Posted by Lynda Barraclough at 11:26 AM