A Chief and his Wheelbarrow: Digitisation and history in India’s Northeast

Historical Christian missionaries have long drawn the spotlight in modern Mizoram, a hill state in the borderlands of India’s northeast.  Stone memorials of missionaries’ late-nineteenth-century visits rise up along roadsides, their hair clippings are preserved behind glass, and their names christen Mizo schoolchildren’s sports teams and populate history books.

In late 2011, our EAP454 digitisation team arrived in Mizoram no less star-struck.  We trained our cameras on the earliest missionary documents and photographs in hopes of preserving digitally the exceptionally rapid transition of a Mizo hill people fundamentally transformed, from an oral society following localised religious practices to an overwhelmingly Christian and literate society.  In many ways, the plan was both sound and successful.

But while snapping away at what we thought was the main historical vista, we started hearing other voices from the past whispering on our panorama’s fringes, beckoning us out to an overgrown, more vernacular trail.  With the help of various custodians of historical material, we started bushwhacking.

The trail took us away from the familiar paths and historical narratives, reversing their direction from a Victorian Aberystwyth and London inwards to a Mizo Aijal and Lungleh outwards.  Among many colourful characters, it led us to Khamliana Sailo, a Mizo lal, or ‘chief’. Khamliana grew up around fire and sword.  By age twelve he had witnessed atrocities by both British and Mizo forces, including the utter destruction of his chiefly grandfather’s village and livelihood.[1]

The next time the heir Khamliana came face-to-face with invading British forces, he and his father joined up as guides and interpreters, assisting a British captain who was known in the vernacular ominously as Lalmantua—the capturer of Mizo chiefs.  Khamliana was helping the very forces that had burnt his familial village.  Why?

At first blush, many of the EAP454 documents paint Khamliana as a full-blooded British ally.  A wealthy Khamliana makes various donations to the British Raj, principal among these a massive gift to the Imperial Indian Relief Fund in 1915.  Here, Khamliana’s largesse earns him nation-wide press in the journal The Feudatory and the Zemindari,as well as recognition from the Chief Commissioner of Assam and the regional Superintendent. 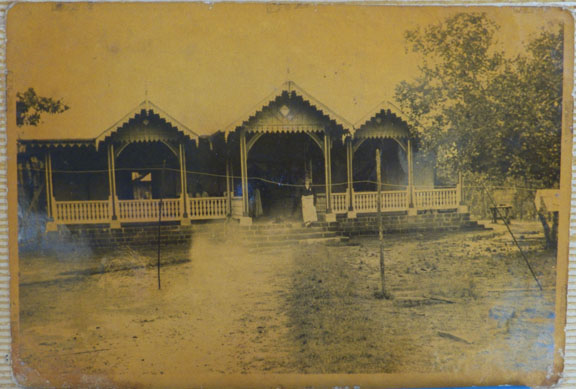 This idyllic ally Khamliana is also evident in the vernacular letter he wrote in 1897 to Kumpinu [‘Company Mother’ or Queen Victoria], a letter heralded as the first ever written by a Mizo. In it, Khamliana proudly informs the Empress of his intent to light patriotic bonfires all around his village on her birthday.  His tone is petitioning and deferential: ‘We will live on your kindness and take heed of your orders,’ he writes, ‘as for us we are less significant and smaller than even the ants to you.’[2] 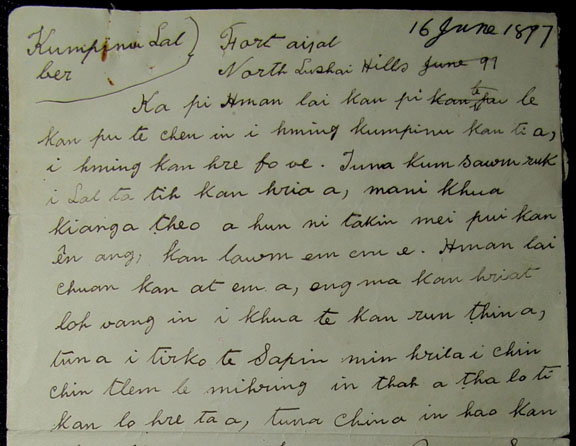 But pliable to the colonial authorities as he might have appeared, Khamliana was still playing a much older chiefly game.  Colonialism might have made some new rules, but he still strove to carve out and maintain familial status and honour.

Quick to learn and to exploit the potentials of the writing technology introduced more widely in the 1890s, Khamliana requests and keeps written character references from colonial officials, using these to secure positions for his sons. He fights for land rights. He invokes his father’s assistance to the Raj for special permission to keep guns.  He pens his own bonds of allegiance with Mizos, conscious of the potential for permanency inherent in the new technology (‘This agreement is a real one,’ records his pact with one Ralduha, and ‘must be kept as record for ever’).  He also maintains scrupulous (and apparently carefully concealed) financial records of vast wealth; in popular historical memory today, Khamliana drops off his first bank deposit via wheelbarrow, colonial officials’ mouths agape. 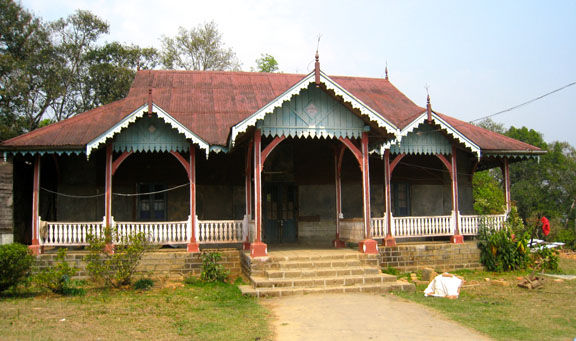 Indeed, Khamliana inherited his chieftainship from his father in a time when waves of chaos, war, and political upheaval were crashing over the hills.  In his attempt to stay afloat amidst such a turbulent political sea-change, he grasped the new technology of writing, deftly managed wealth, chose his own allegiances, wrung material benefits out of colonial authorities, and dispatched calculated messages of diplomacy even to the highest British Chieftainess.

As Khamliana’s case shows, the EAP454 collection provides an opportunity to see the people of this upland region of India as complex, three-dimensional participants in their own histories rather than as the flat, supporting characters to colonial missionaries and officials.  There is a whole host ready to ride into the scene.  And at least one of them is pushing a cash-stuffed wheelbarrow.

Written by Kyle Jackson co-director of the 2011 EAP pilot project ‘Locating and surveying early religious and related records in Mizoram, India’.  He is a PhD candidate at the University of Warwick’s Centre for the History of Medicine where he is exploring histories of health, religion, and Christianization in colonial northeast India.

Posted by Endangered Archives at 8:21 AM